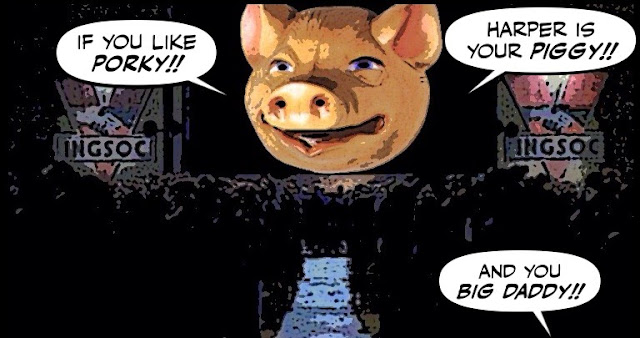 We know that Stephen Harper is spending hundreds of millions of dollars of OUR money to try to brainwash us into thinking that he's a Great Leader.

We know that those porky ads are nothing but propaganda to try to bribe voters.

As this excerpt from his latest YouTube channel production, starring the oily Con man Joe Oliver, makes only too clear...

But what every Canadian also needs to know is that these ads are not just sleazy and immoral. They are also an assault on the rule of law.

In what country does a government take tax revenues and use it to pump out continuous government propaganda that tries to brainwash the citizens with its performance, whether truthful or not? Many would suggest China, Russia or even Zimbabwe. Sadly, it is also true in the Canada governed by the Stephen Harper Conservatives.

For as Errol Mendes points out, not only are ads like these outrageously partisan... 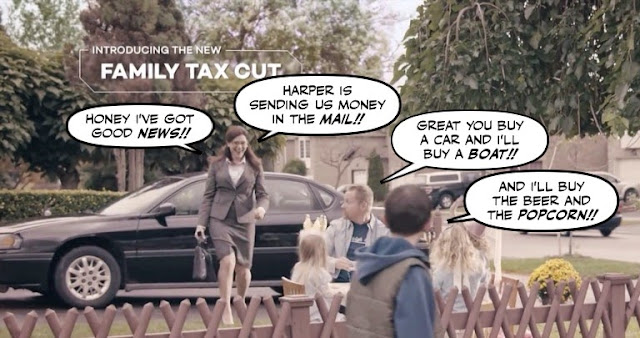 When these ads announce that it will fill the pockets of taxpayers with thousands of dollars, it’s a less-than-honest exhortation for viewers to vote Conservative in the upcoming 2015 election.

They abuse the political process and undermine our democracy.

Governments are allowed to advertise about services and programs that they are implementing, but when some of them are either untruthful, promote partisan positions or are not even authorised by Parliament, it becomes a vehicle to undermine the foundations of any democracy that values the spirit and letter of the rule of law.

While shamelessly recruiting the gullible to serve his sinister purposes...

And what bothers me the most is that the progressive parties are allowing Harper and  foul Con cult to get away with MURDER.

If such democratic subterfuge has the same effect of unfairness before an election, then the Harper government is clearly undermining the spirit of the rule of law critical to fair elections. He has, in effect, made the government a third party that is allowed to spend potentially millions of dollars, making the actual limits in the election period illusory to some extent. This deserves a profound rebuke by Canadians.

By not making a bigger issue out of that grotesque attempt to brainwash Canadians.

And not making their own ads to counter his dishonest propaganda. As I tried to do in this humble video.

By using his own words against him...

Because not challenging his porky propaganda could be a fatal mistake.

For those ads may appear crude, but they are actually very sophisticated. They are focus tested to the max. And unless they are challenged or countered they will have an impact.

He will get away with it. He will brainwash the gullible.

And unless we deploy the truth aggressively against him, the Big Lie will RULE.

And he will steal the next election and kill our country FOREVER...

Brainwashing? Is this legal?

Democracy n. 1.government by the whole people of a country, especially through representatives whom they elect.
2.a country governed in this way.

3.a form of society etc. characterized by social equality and tolerance.


People hear the words, but sometimes do not know what they mean.

In my opinion, EDUCATION is the KEY! Encouraging young children to solve problems and think for themselves!

The opposition is not going to let him get away with this. Don't forget that the Con fundraising machine takes in more than 5x what the NDP does in donations, so I'm betting that they are waiting until the time is right to begin their own ad campaign. As for the Libs, they don't really have to do anything; they're riding high in the polls and as long as they keep JT on script and on a short leash, it's pretty much smooth sailing until the writ drops.

I saw it on TV so it must be true. They would not allow anything malicious to have access direclty to the lizard brain of humanity. After WW2 the world knows this is incredibley dangerous.

The true cost of Harper's nauseating partisan ads will be a billion plus by the time this sleazeball is booted from office. That's just the ads. When he was in China, he flew all the way back for his Remembrance Day photo-op, only to jump back on the plane and fly to Australia. How's that for sound fiscal management. I could give many other examples but you get my point I'm sure.
I live for the day that the "Closet Cowering Coward" is evicted from 24 Sussex.

hi Kathleen...I'm not sure that whether what the Cons are doing is strictly illegal, but corrupting a democracy is one of the worst crimes in my book, so it should be illegal. And yes, it's clear that we are not doing a good enough job of convincing young people why it's so important to vote. School need to make citizenship, an important part of their curriculum...

hi Chris....yes I suppose you're right. The opposition is holding its fire to save ammunition for the official start of the election campaign. But I still think that it would be a mistake to wait that long, and not put out at least YouTube videos to counter their propaganda, and start framing that campaign before it starts.And you're also probably right about Justin Trudeau, although I also believe that he should be selling CHANGE in a bigger way than he has.But then I'm horribly impatient and terribly demanding... ;)

hi Steve...I had to watch the whole almost THREE minutes of Stephen Harper's latest video, so I could choose some clips and not expose you and other readers to such hideous propaganda. But as I said it is targeted, it is focus tested to the max, and the opposition should do more to expose this scandal....

hi anon...you're right the bill will be a billion plus by the time the election campaign officially begins. And we get bombarded with all those Con ads, paid by them for a change out of their huge war chest. I know of no other democracy where such outrageous brainwashing is allowed to happen. It has been happening for so long I fear far too many have been numbed into believing something like that is normal. But it is not normal, it is outrageous, and for violating the rules of our democracy they should be arrested. And like you I live for the day when we are rid of those foul Cons...