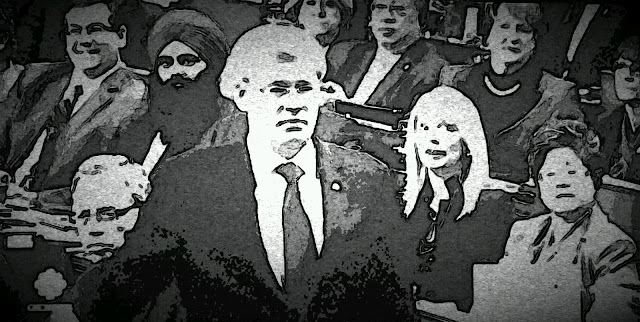 Well after spending most of the past month travelling around the world, hopping from one photo-op to another, Stephen Harper finally returned to Parliament yesterday.

And as you can see from this grainy photo, and the weird look on Candice Bergen's face, it was not a pretty sight.

He was angry, he was bitter, he snarled at the opposition, and even his helmet hair looked like it was about to fall off his head.

But then who can blame him eh? So much has changed in such a short time.

And all his glorious delusions of winning the next election are quickly turning to excrement... 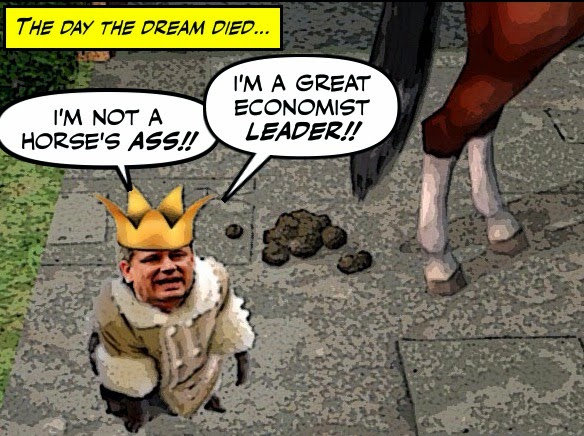 The plunging price of oil has made it impossible for him to pose as a Great Economist Leader anymore.

Not when him and Joe Oliver blew the surplus, before it existed, and the cupboard, or the closet, is BARE. 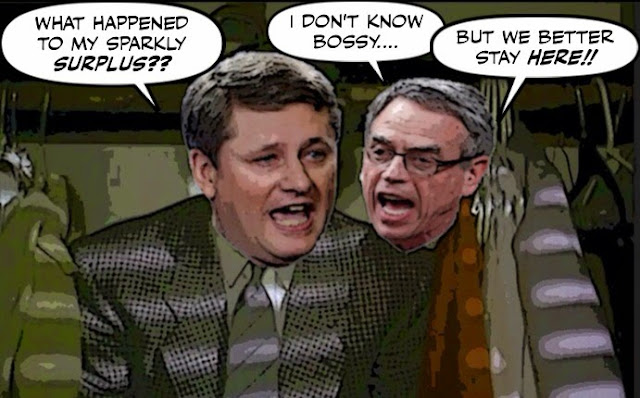 Harper’s spending spree, which will cost the federal treasury more than $30 billion in foregone revenue by 2019, has eaten up the bulk of expected budget surpluses in coming years.

Any further deterioration in the fiscal picture could force the government to use part of its $3 billion rainy day fund to keep from winding up with a budget deficit in 2015.

And not when the whole economy is sinking like a stone.

Canada's economy is increasingly at the mercy of a risk-averse, inept corporate elite addicted to government tax breaks. They are enabled by an ideologically addled government that is incompetent.

It is a deadly combination -- a dumb and dumber team dragging us backwards at a time when the world is hoping there won't be another economic collapse.

And his Great Pipeline dreams have gone up in smoke, or collided with Burnaby mountain... 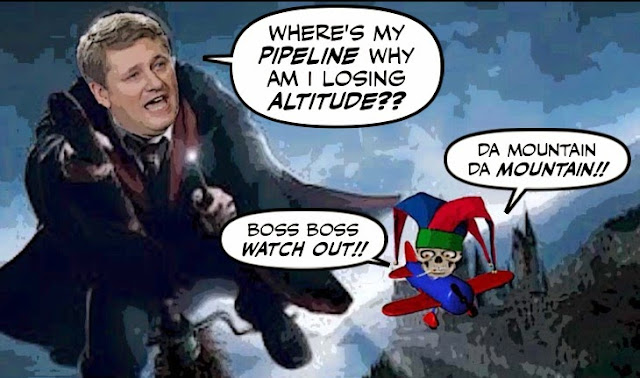 To make matters worse he can't even pose as a Great Crime Busting Leader. Not when the crime rate is sinking even faster than the economy.

Or hope to impersonate a Great Warrior Leader... 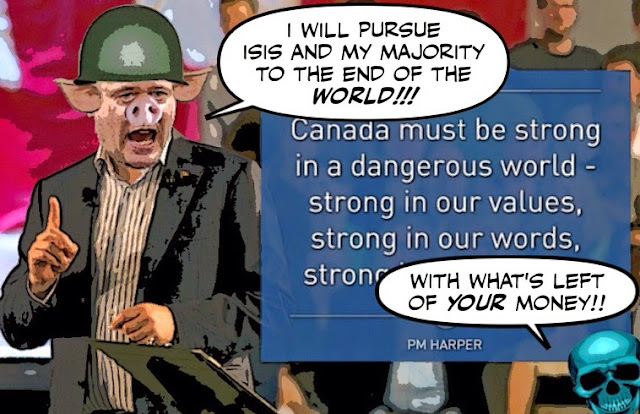 Not when the war is going nowhere, and he dare not tell us how much it's costing.

Or that it's almost certainly going to cremate the sorry remains of the surplus, and bomb us back to a DEFICIT.

And if he was hoping to buy back the support of veterans, well he can forget about that. After how Julian Fantino has betrayed them... 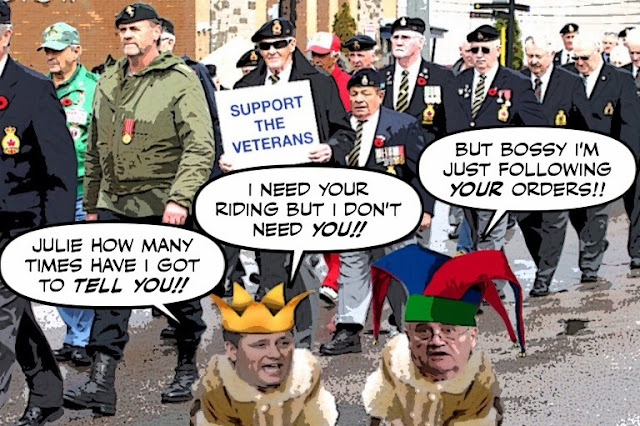 But STILL he won't fire him.

It is past time Prime Minister Stephen Harper cashiered this arrogant, abrasive and inept minister.

“Why is he still there?” Well might Canadians wonder. Whatever Fantino’s utility as a vote-puller for the Conservatives in Vaughan, he is an embarrassing liability to the party.

Or fire Leona Aglukkaq for making his government look like a sorry joke...

Incompetent, callous, and IDIOT, all at the same time.

Which means that he won't be able to call an early election, as he was clearly planning to do just a few weeks ago.

So the scandals he was hoping to dodge will come back to haunt him... 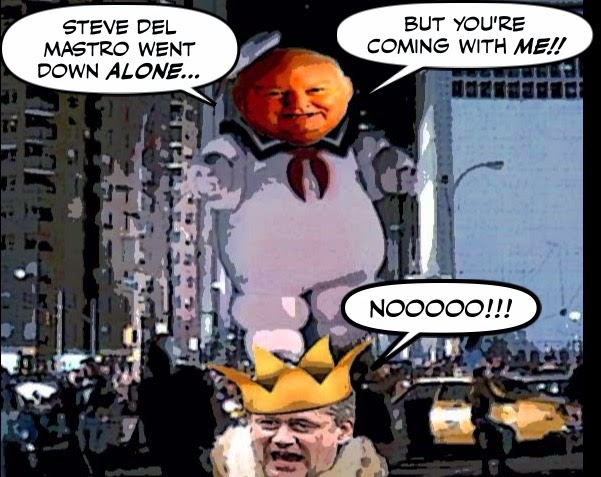 Or finish him off.

And I wouldn't be surprised, when all of this sinks slowly into mind, if he finally sees the writing on the wall... 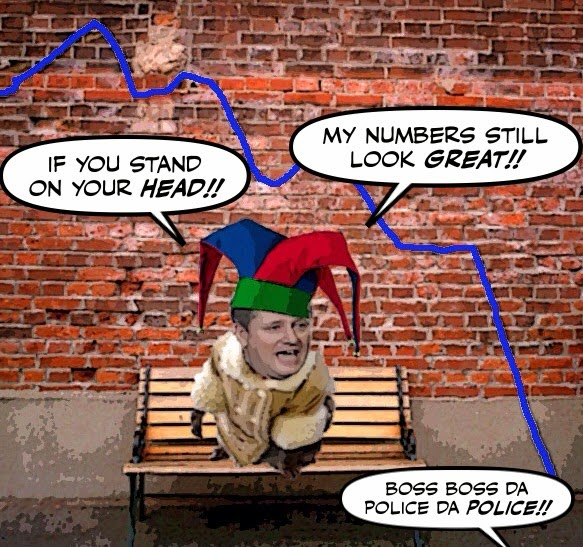 And decides to quit before the situation gets even worse, and he follows the price of oil into the ground.

As a British Prime Minister is once reported to have said when asked what is most likely to blow a government off course:

Events have conspired to help us mightily.The wheel of fate has rolled our way.

And the dictator's days are NUMBERED... 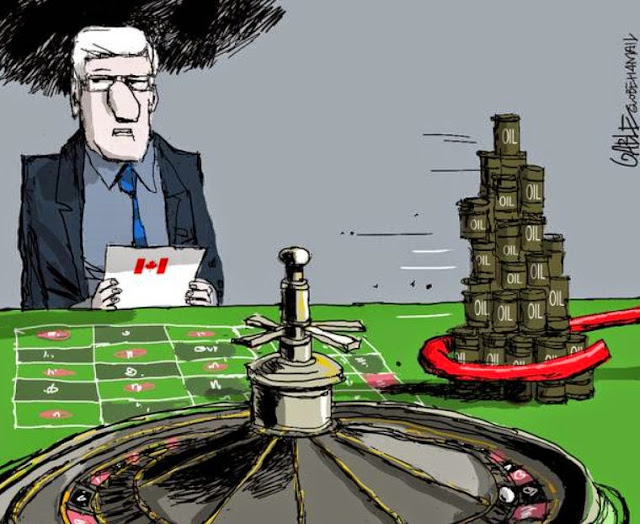 Time to get the jack boots on eh Herr Harper?

A new disaster daily, but not just for Harper for Canada. First RIP Jean Beliveau He was the type of Canadian we all deserve as leader. Your covering it pretty well but I want to add some other items you might highlight. (if I am redundent sorry) The RCMP will not release the terror tape of that proves it was a terrorist attaqck in Ottawa. That should tell everyone it was just a crazy person. The Wheat Board madness, first dispanding it then giving it away to AMD for free. Which will bankrupt the farmers, steal their land and make a new private wheat monopoly. Green energy is providing more jobs than the tar sand. With zero help in fact roadblocks from the Federal goverment. Canada now has its name linked to the worst nations in the world when it comes to climate change, endangeroured speices and overfishing. Well done Mr Harper.

None of them are going anywhere. They like the salary, perks, drivers, pension, medical services, etc. Who knows, as you say, things are ruled by EVENTS. An event could leave stevie in the driver's seat for another 4 years. On the other hand if the Veterans keep up the pressure during an election, it might turn the tide, with aging baby boomers, who as children had parents who were veterans.

The falling price of oil, maybe the undoing of Harper and is herd. If massive lay offs begin in Alberta, there will be workers returning to their home provinces, with no jobs, no social safety net. That could get ugly.

Falling oil prices will not only have an impact in Alberta. The number of young people working in Alberta, who live in B.C. and commute, is not small. In some towns, if all those workers came home, it would not be a good time in B.C. The Alberta Premier is doing his current tour through the east to find an exit for their oil, if only to Europe. He may not want to battle it out in B.C.

B.C. has the highest rate of child poverty in Canada for over 10 yrs. If all those workers come home and nothing happens with LNG, Harper might be toast. We can hope.

Although you and other bloggers have provided coverage on the Rankin Inlet scandal, most of the MSM haven't given it the attention it deserves. However, if it goes mainstream, people may well get sick of Ms. A. but Harper won't fire her. The cons will try to ride it out. Because really what can we do? We tens of thousand march in the streets to protest the Vets and Rankin Inlet? Not so much. We can barely get enough people out to vote. On the other hand if there is a very fast "depression" in the economy and Duffy writes a book, it might be fun.

As Stockwell Day said on Power & Politics on Tuesday, Harper doesn't care if one of his ministers is taking heat from the Opposition and the media.

I would add: Harper would NEVER replace that person (eg. Fantino, Aglukkaq) in the middle of a term.
To replace a minister, he has only done it at the beginning of a new term in office or the rare cabinet shuffle. To Harper.... to replace a minister when the heat is on him or her would be a sign of weakness, and an admission that had an incompetent person in the portfolio.