Well it was always going to be a freak show. Ezra Levant and Brian Lilley, the two Con clowns from Sun TV, on a so-called Free Speech Tour.

Spewing bigotry out of every orifice, and asking their faithful followers suckers to pay for the privilege of watching them live and in person.

But who knew it would be such a bust or such an execrable adventure?

Oh dear, it looks like Ezra Levant's Free Speechapaloser Tour of Western Canada is headed for the dumper.

They had to cancel the Saskabush leg of their crusade as the locals stayed away in droves. The folks in Swift Current know a stiff when they see it and fewer than 30 seats had been sold at the local Legion Hall, capacity 400.

A washout in Red Deer.

And as you can see from this tweet, this is what the Con base calls a "full house" in Penticton...


If you look at it through a MICROSCOPE.

But then of course, the ghastly homophobe Lilley needs all the human exposure he can get.

Because when I watch him on TV, I can never quite tell whether I'm staring at a TV set or a fish tank... 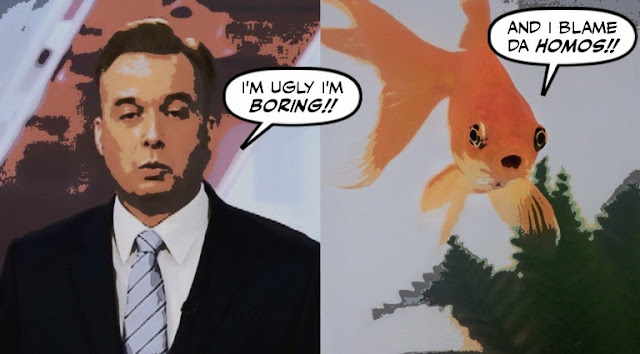 Just like the ghastly bigot Levant needs all the dough he can get, to pay for his latest libel judgement.

Although when I take another look at this photo of that "full house" in Penticton, and I count all the white haired members of the shrinking Con base... 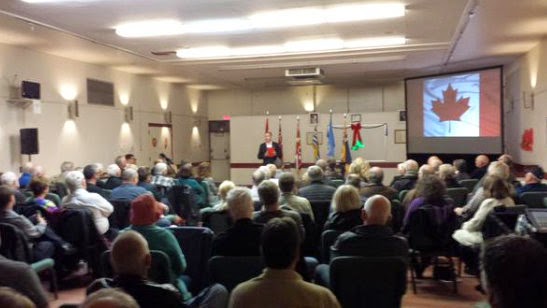 I can't help wondering if Levant is also preparing for the moment when Moses Znaimer buys Sun TV.

Television entrepreneur Moses Znaimer is hoping to expand his reach on the TV dial by acquiring the money-losing Sun News Network from Quebecor Inc.

Once the architect of CITY-TV, Mr. Znaimer now owns a stable of TV, radio and other media properties targeting an audience aged 45 and older – what ZoomerMedia calls “the world’s largest and most affluent generation.”

And he is forced to appeal even more directly to his aging audience... 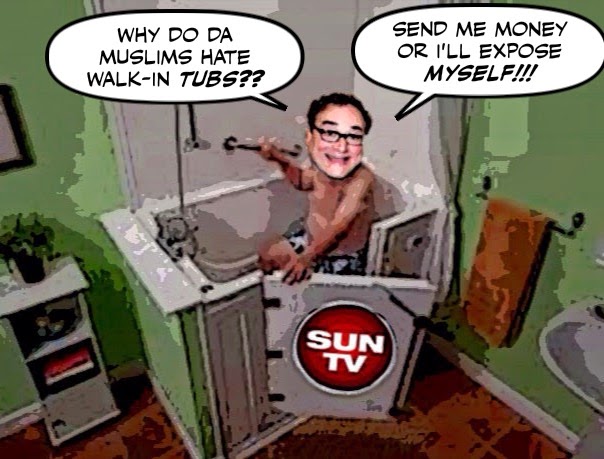 Because he will do ANYTHING for money eh?

And the moral of this ugly story?

The Con base has no future. Neither does Sun TV, and neither does Ezra Levant.

But until the day he is finally fired. 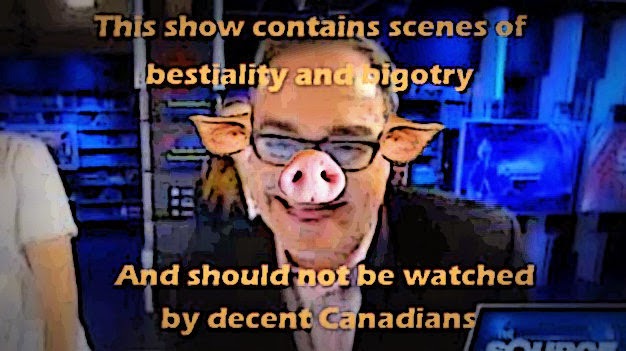 I already knew that Sunnews is watched by mostly hard-core cartoon enthusiasts and the ancient, as in very old and confused stuck in the 40s electorate...Also wondered in my mind..

Who the hell would pay to hear Brian Lillly or Ezra Levant?...Now keep this in mind...Sunnews had been advertising this free-speech tour featuring Brian and Ezra for about a month...


63 seats have been sold in Red Deer Alberta in a 300 seat facility, in the middle of Stephen Harper-land Sunnews and their star media personalities have less drawing power than a traveling carney midway show with stale 3 day old corn dogs...

Oh indeed...Been saying it for the last 3 years...Harper`s base is dying off in droves, everyday he delays calling an election he`s losing supporters..

Those white-haired voters are not on the internet, they rely solely on cable TV ....There is no future in that electorate..

This "white-haired voter" refuses to spend her pension money on cable TV........my laptop is sufficient.

Looks like Ezra may have to ask daddy for an increase in his allowance in the near future. And the Z-man may have to order up a crate of 'Miracle Spring Water' (it's free!) in order to get this baby off the ground. But he's probably just after the broadcast licence and government subsidies.

At the Dec.12 Penticton event:

"VIP Ticket – includes general admission, plus a private reception with Ezra & Brian, including a photo opportunity."

That any Canadian Legion would be a venue for the "Freedom Tour" boggles the mind, in view of:

Those white hairs could be dead any day. Those are the aging baby boomers and up. Not much future there. Zoomers, give me a break. most of the aging baby boomers are not spending. they are afraid for the future and that of their children. A lot of those "white hairs" at those types of meetings are wondering how Canada got to be such a mess and how are they going to get through next month. They seem to forget they helped get it there by supporting people like harper and Christy clark. The well to do "white hairs" have already left for Maui, Mexico, and Palm Springs. Levant is expecting people to pay for these "events". Good luck.

hi Hugh...yes they have been flogging that Freedom FriesTour for all it's worth. So it is gratifying to see what a poor response they're getting. I simply can't imagine how anybody could pay to see those two clowns. But the fewer the better....

hi kathleen....I too spend more time on the internet than I do watching TV. But I do enjoy watching some CBC and PBS documentaries so I must have cable. I also have been checking Sun TV to try to figure out how much the Cons are supporting it with their porky ads. So it does contribute to the struggle... ;)

hi anon....I actually admire Moses Znaimer. He was one of the most creative forces at one point in our TV history. He may be insufferable, and one of my friends claims he keeps a plaster cast of his penis on a shelf. But if he fires Levant he will do us all a great service. And if he turns it into a shopping channel I would be eternally grateful...

hi David...thanks for your info which helped me build this post. And yes what on earth is the Legion doing getting involved with those nutters? I'm afraid it's just more evidence that the Legion is out of it. And then they're surprised when younger soldiers don't bother to go there...

hi e.a,f... well let's hope that all the white haired people don't die soon, since some of them are among my best friends, and none of them would be seen dead at a Levant Lilley show. I think the ones who attend Legion events are in a class of their own, really grumpy and not too bright...

I miss Brian Lilley and Ezra Levant - when will they return to prime time?