What Would You Tell Stephen Harper If He Tried to Shake Your Hand? 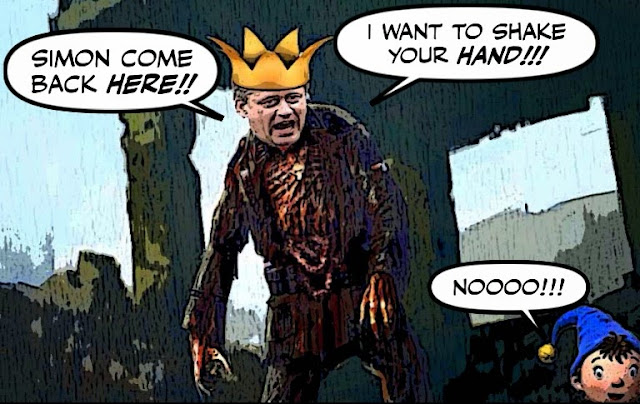 It's a horrible thought, and it could only happen in a nightmare.

But what if you were wandering through a deathly dreamscape, and suddenly there was Stephen Harper, offering to shake your hand?

What WOULD you say to him?

And while that could never happen to me, because I'd rather cut off my hand than shake his, or run in the opposite direction, or moon him.

I have to say I think Gerald Caplan has a list of very good suggestions.

You need to stop ignoring climate change. It’s real. It’s a crisis. How can you be unmoved? You call imposing regulations on the energy sector “crazy.” Most of the rest of the world finds Canada’s refusal to act on greenhouse gases crazy.

Starting with that one, because there is no more important issue than saving the planet we live on. And his behaviour is nothing less than criminal. 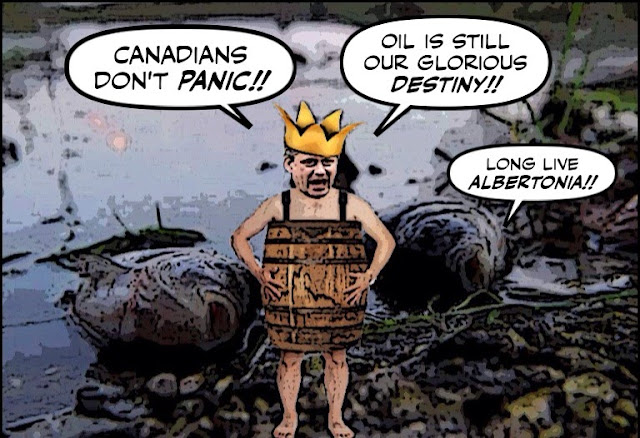 For there is no greater crime against humanity than destroying the future in the name of short term greed, or his precious Greater Alberta.

And when it comes to bestial behaviour this suggestion would be next:

You need to stop betraying our veterans. Instruct the Department of Veterans Affairs that they have one month to get their house in order – or else. Make yourself the minister of Veterans Affairs to signal your serious intent. Why have you allowed this scandal to fester for eight years?

Because I have never understood how he can use the military to try to make himself look like a Great Warrior Leader.

Only to betray those who have sacrificed so much for their country... 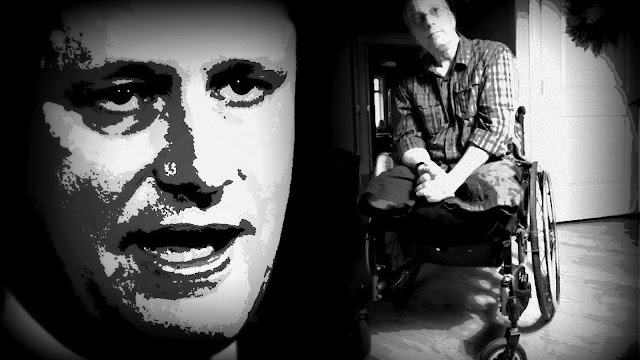 In such a cruel and un-Canadian manner.

And of course that could only lead to this suggestion:

You need to stop appointing buffoons as your Parliamentary Secretaries. With your obvious blessing, each has brought the House of Commons into greater disrepute. Del Mastro (now thankfully gone), Poilievre (now thankfully silent), Calandra (now drowning in crocodile tears) – each has made a mockery of Parliament. You should be ashamed, but you seem to know no shame. 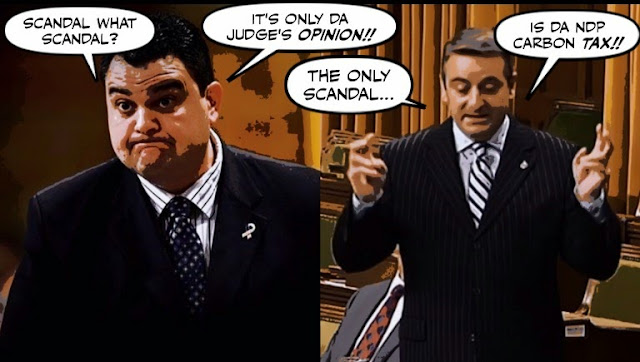 Because goodness knows he is shameless. The way he has used buffoons like Dean Del Mastro and Paul Calandra to make a mockery out of our democracy is simply unforgivable.

And the way he uses government agencies to go after his enemies is even worse.

You need to stop enabling the Canadian Revenue Agency to intimidate or silence your critics. Politically-motivated tax audits are a Watergate kind of tactic that has no place in a democratic nation. Tricky Dicky Nixon is no role model for Canada. 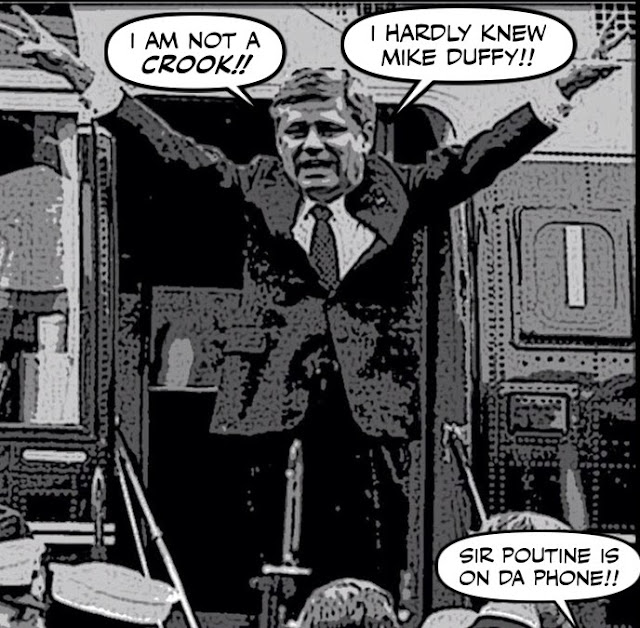 I mean who does he think he is? And doesn't he even know what happened to Nixon?

And then of course I'd have to say something about his foreign policy, and so appalling is his record I would not know where to start.

But this is as good as any:

You need to stop being an indiscriminate cheerleader for Israel. Stop treating the Palestinian people as if they didn’t exist and have no rights. Stop playing politics with anti-Semitism. Stop conflating anti-Semitism with legitimate criticism of the government of Israel. You clearly want to stifle all critics but you can’t. 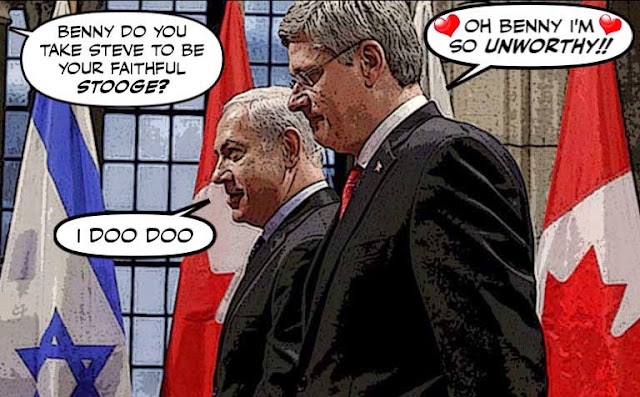 Because although I'm all in favour of heavy breathing man love, he really needs to understand that his boyfriend Benny is a MANIAC.

The Israeli prime minister, Binyamin Netanyahu, has said he will tell the US secretary of state, John Kerry, that Israel will rebuff any moves at the United Nations to set a timeframe for a withdrawal from territory Palestinians seek for their state.

A war criminal and a racist thug.

Which in turn leads naturally to this suggestion:

You need to make an urgent priority of the plight of aboriginal girls and women. That’s the real law-and-order agenda that Canada needs, not your pandering to your conservative base. Locking up unprecedented numbers of aboriginal women is not the way to provide them protection and security.

Because he also really needs to understand that his obvious obnoxious misogyny, and racist contempt for our precious First Nations is simply outrageous. 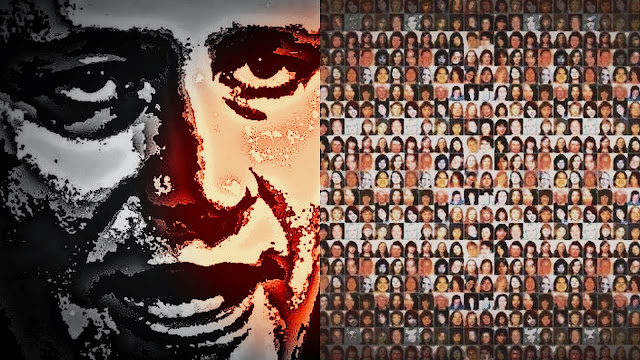 Aboriginal Affairs Minister Bernard Valcourt says some aboriginal men have a “lack of respect” toward women on reserves and that a national inquiry into missing and murdered indigenous women won’t accomplish anything.

Blaming victims makes him look like a dangerous psychopath.

And that trying to turn our country into a prison state where solitary confinement is used as punishment on an industrial scale, makes him no better than Dick Cheney... 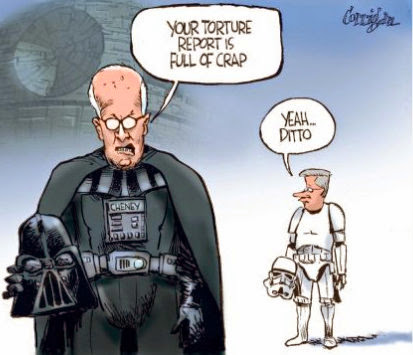 Because let's be clear, solitary confinement IS torture, it does kill, it is shameful.

The picture that emerges is of a prison service that is reflexively resistant to change, cheered on by a Conservative government that is intent on slapping more people behind bars, for longer terms, and damn the consequences. We are sinking very low.

And Caplan is right again:

In so many of these ways and more, the Harper government has made Canada an outlier among the community of nations. 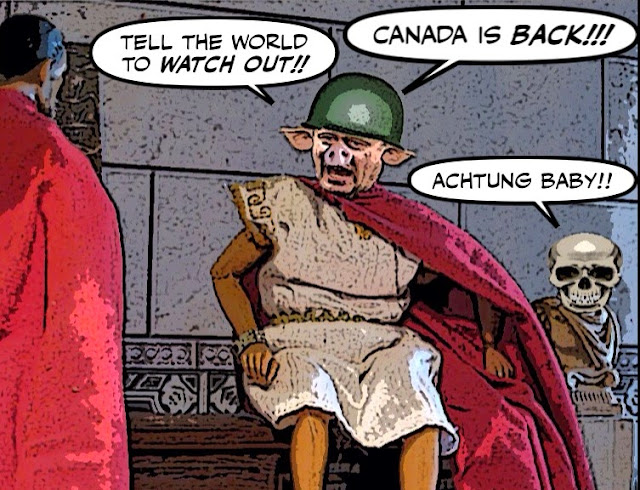 That monstrous leader and his foul regime have disgraced us in the eyes the world, and turned this once proud and decent country into a pariah nation.

But then I'm not Caplan, I wouldn't want to shake Great Ugly Leader's hand.

And if I ever came face to face with Harper in some nightmare, and I couldn't run away or moon him, I would probably be too horrified to think clearly, or come up with a list of suggestions as good as his.

But this is what I would say to him, as politely as I could:

Sir, you are the worst Prime Minister this country has ever known. And the most ghastly bully beast I have ever seen. Your filthy Harperland is not my Canada. I reject it absolutely.

And I just want you to know that I will not rest, no matter how tired I am, or how hard the struggle. Until the wonderful glorious day that you are finally defeated.

But that's just me eh? Think about it. In this broken complacent country.

What would YOU say?

If my memory serves me correctly(being a white-hair), wasn't there a wire fence of some sort erected somewhere in NL during one of Harper's "speeches" so only a chosen few could get close enough to hear what he had to say or was this a nightmare?

love your posts
but where are the pictures of Trudeau and Mulcair HUGGING him?
those are pictures i will carry in my head into the voting booth

During the last election campaign, CBC's Terry Milewski reported how Harper's team kept reporters more than 40 feet away behind steel fences at an airport, and at every campaign event limited questions to 5 (included one question in French)

How Do You Sleep (with apologies to John Lennon)

Only five questions, 'cause you are the king
Jump when reporters ask you anything
You keep them more than forty feet away
Behind steel fences, just another day
How do you sleep?
Ah, how do you sleep at night?

ah, to shake his hand or not to shake his hand, that is the question. na, I don't touch toxic waste, and he is it, a toxic waste dump. better to show him your back and walk away. he turned his back on Canada, its Veterans, its provinces, its First Nations People, turn our backs on harper and his herd.

Québéc supremacist and actor Trudeau, or, Québéc lawyer and French citoyen Mulcair ... which?!

I would not shake Harpo's hand ; I'd be like this Australian senior greeting his prime minister Tony Abbott - who is Harpo's best friend.
https://www.youtube.com/watch?v=cRMI4Z7ri8A

hi David....the hollow legacy indeed. Long after the Cons are defeated I will be reminding everyone of what a monster Harper was, and doing my best to bury that legacy...

hi Kev...that's a great story. I can only hope she's an NDP supporter and that there are no Cons in your family. ;) I actually saw Pierre Trudeau a couple of times, climbing the hill to his fabulous art deco house not far from the McGill biology building where I used to work. But I was too shy to approach him. I had mixed feelings about him because of the War Measures Act, but compared to Harper he was a real giant...

hi Kathleen...thee are always fences around Harper and every audience is carefully chosen for his never-ending photo ops. But while there are a few Canadians I might welcome the opportunity to greet he is definitely not one of them...

hi David...living in the downtown area not far from the convention centre I have seen Harper's motorcade roar through my neighbourhood several times. And quite frankly I would hesitate to approach him because I have never seen such a frightening collection of bodyguards. They look incredibly sinister and more like the bodyguards of a third world dictator than those of a Canadian Prime Minister. I have also seen Obama's motorcade and believe it or not it is much smaller and much tamer by comparison....

hi lungta...I haven't seen any pictures of Mulcair or Trudeau hugging Netanyahu, but I wouldn't be surprised. When it comes to Israel all crimes are dismissed or forgotten. Ever since the first Gaza war I have considered Netanyahu a war criminal so I can't imagine how anybody could hug him...

hi e.a.f....I was raised by my parents to be polite even to those I dislike intensely. And I do respect the office of the Prime Minister. But if I was ever in Harper's presence I would probably not say anything and just walk away. While restraining the very strong urge to moon him... ;)

hi anon...I don't know it's a difficult choice. But both of them are definitely more Canadian and would make better Prime Ministers than Stephen Harper...

hi anon...yes that would be the best course of action. I sometimes take a short cut through the convention centre but never when Harper is there. The place looks like an armed camp with police dogs everywhere, and as I told David, it looks more like something you would see in some backward dictatorship....

hi hinofan...thanks for that video. That old guy was great. And Abbott and his good buddy Steve are dick heads indeed...;)