The Journey to the End of the Con Regime 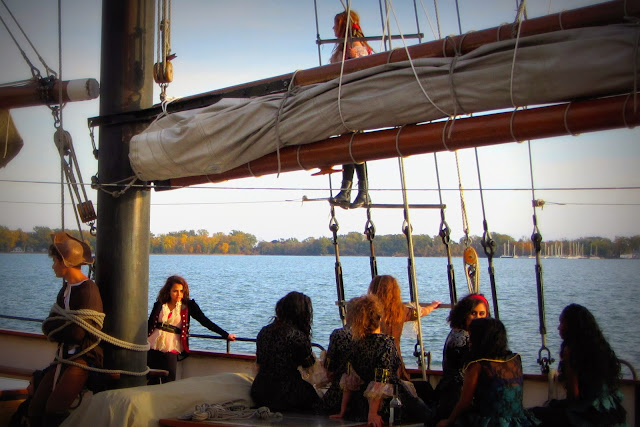 I was watching them make a music video on an old schooner in the harbour yesterday, when I suddenly realized that in exactly one year, if Stephen Harper doesn't break his own law, we'll be voting in a general election.

And then, like the cabin boy lashed to the mast on a ship of female pirates, I thought oh boy this could be a long and exhausting journey eh?

Because while just a few days ago I was almost sure that Harper was going to go for an early election, maybe even a late fall election. In a last desperate kamikaze move to seize the moment, by posing as a Great Warrior Leader, and catch his opponents off guard.

You know, his Tora Tora moment.... 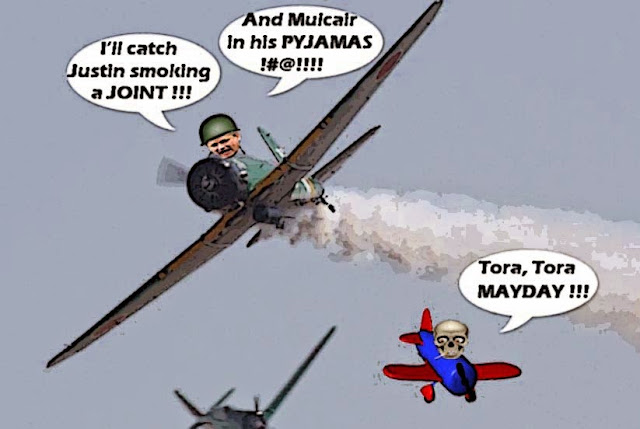 Now I'm thinking he won't, because if this poll is correct it really would be SUICIDAL.

Canada could have a minority Liberal government with an NDP official Opposition a year from now if current trends continue, according to a new EKOS poll conducted jointly for iPolitics and Radio-Canada. Prime Minister Stephen Harper’s Conservatives, who have ruled Canada since 2006, risk being relegated to the back corner of the House of Commons unless they can turn things around in the coming year, the poll conducted by EKOS Research indicates.a

Justin Trudeau’s Liberals are well out in front with 38.5 per cent of the vote. The Conservatives are at 26.4 per cent, with Thomas Mulcair’s NDP in a close third at 25 per cent. However, the NDP leader has the highest approval rating and the New Democrats have the most potential to grow, leading EKOS President Frank Graves to conclude the NDP could form the opposition, despite its current third place standing.

The Harper cult's political Jonestown. Where Great Ugly Leader and his ghastly Cons are both crushed and HUMILIATED.

“The next Parliament, if it were to be created based on the poll that we have, would see a strong minority Liberal government with a sizeable NDP opposition with Mr. Harper reduced to a third party, rump status,” said Graves.

That assessment was backed up by veteran poll analyst Paul Barber, who blogs under the name TC Norris. He said if these numbers were to hold up through a campaign, and based on the regional breakdowns, the Conservatives would finish a distant third, 70 behind the Liberals and 27 behind the NDP.

And we finally get to treat him like he's treated us... 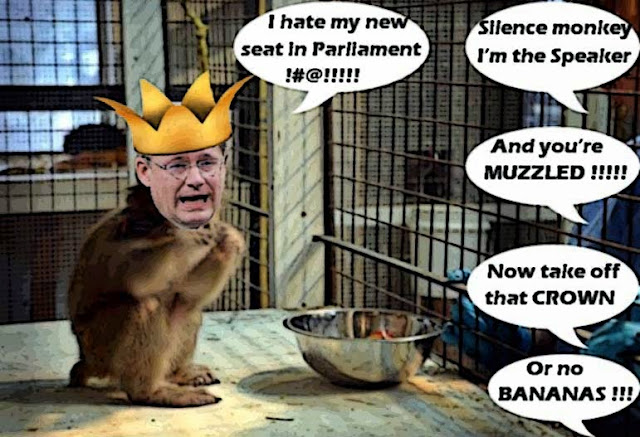 Which was such a great thought it made me wonder whether the three-day Great Victory Party I'm planning is too short, and whether I have saved up enough booze and fireworks to go for a whole week. Or whether I should start celebrating TOMORROW.

“Things can change but I fail to see how a government, a year out from reckoning with the public in the polls with these many challenges and so few obvious cards to play, is going to have much success,” said Graves.

Because although those numbers may make Stephen Harper hang in to the bitter end, hoping against hope that he can turn them around. And although as Tim Harper points out, a lot of things can happen in a year.

A year from now, we could be dealing with anything from upheaval in Hong Kong to a health epidemic which has spread to South Asia or to something no one can yet see.

What those numbers tell me is that there is an ENORMOUS desire for change in this country, an Anybody But Harper movement. And if we make the election all about him we can't lose.

If the opposition leaders can successfully make Harper the campaign issue, the dynamics will radically change. Either could win by not being Harper and either would look fresh and progressive when up against a man who, after a combative 10-year hold on power, asks for another four. If a collective Canadian yearning for change takes hold, then tax breaks, a strong economy or good grades on the world stage won’t matter.

That desire for change will trump everything, and will sweep all before it.

Of course, if Harper's numbers match the EKOS numbers, he may decide to quit before the election to avoid being humiliated.

Or before Jason Kenney makes his move... 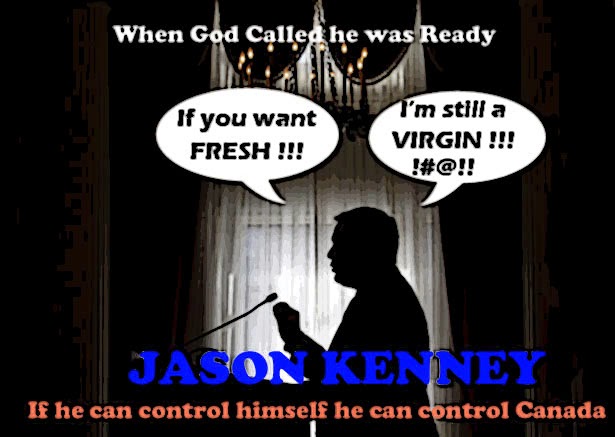 But one way or the other it won't save the Cons, and this is the bottom line:

By the time the leaves start falling next year, the most ghastly leader in Canadian history will be gone.

We will be living in our beautiful Canada again... 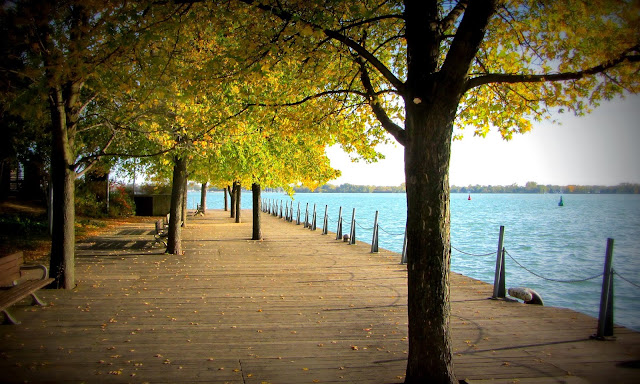 We will be free at last.

And although I now realize I definitely don't have enough fireworks eh?

Isn't that a happy thought to start the week?

Don't count your chickens yet! Without an electoral agreement HarperCon slithers through

A week? How about the rest of my life knowing my grandchildren won't have to suffer under a nasty dictatorship.

I couldn't for some reason continue writing on the last comment space. But if they should get in again maybe your mother does have something to worry about. We have to make sure. Two of my grandchildren go off to university and college out in BC next year. We have to make sure they get their votes in. One of them is aboriginal so recognizes harper is no friend of hers. One will vote liberals, she says, because she is a middle of the roader. The oldest one, who might be going away also, is a lefty like me. We MUST all vote.

Interesting news from Northumberland. The cons are reverting to the CRAP days and forming two factions in the race to replace Harper. Kenny on one side ( his ) and Muldoon pere et fils on the other. Isn't this where we were before the Potato Pete knife job?

I only have control over one vote and that is my own. When I hear people say that they don't know who to vote for..........this tells me that they aren't paying attention to what is happening to our once peaceful and great country. I'm sure citizens of other countries are saying the same thing about their own country.

Most of the World's problems are based on Man's Greed.......never satisfied.....always wanting more $$$$, power etc. We are born, then we die! What happens in between is called life and I would like to think that we are all Human! So, whichever candidate you plan to vote for in the next election, I am suggesting you think carefully and look at which person has displayed that he or she is looking out for the greater good of All Canadians!

We almost had P.M. "lets go to war and kill them" harper defeated this weekend. Had that Russian freighter crashed on the rocks, it would have been the end of harper, Premier "air miles" clark in B.C. ,and the oil companies. Speaking of oil companies, they must be feeling the heat from the polls. They are running ads out here in B.C. almost none stop about how good Canada is doing, how well the environment looks and all because of big oil. It has saved Canada from economic calamity, etc. blah, blah, blah. every time I see one of big oil's commercials I think we're in an election. Or perhaps they simply having an erection, who knows.

The B.C. lieberal's spin on the Russian freighter is to throw the federal conservatives under the bus. Premier "air miles" clark is in India, and so there is another blonde cabinet minister doing her thing, blah, blah, blah.

This is the federal government who closed coast guard stations, and now we have the Russian freighter. Next time the winds might not shift and there might not be an American tug capable of towing the freighter. The coast guard ships weren't capable of towing the Russian freighter, the rope kept breaking. This federal government, with the Tories in control, can't even ensure the ropes on coast guard ships don't break. If they can't keep ropes up to standard, lord and whomever else, help us if ebola comes to Canada.

The U.N. is better off asking China for help because if Canada can't keep ropes from breaking on coast guard ships how the hell can they possible get it together to provide anything to fight ebola with.

For that matter who believes anything the cons say about what they are doing. $800 M for bombs for outdated ships and still no decent ropes on coast guard ships. If this weren't so sad, it would make a great comedy. Yes, that's it, a new t.v. series, based on the old, "Yes, Minister" from England, except we just sub in the Cons. I do hope that is where they go, to jail and become the cons they truly ought to be.

hi Ben...I'm not quite sure what you mean by an "electoral agreement." Are you concerned that the Liberals and the NDP might split the vote, and allow the Cons to come up the middle. Or are you concerned that the two parties might not be able to form a minority government? Both are legitimate concerns, and the sooner we start thinking about them the better. But no, I'm not one to count chickens before they hatch. But I do like to cheer up progressives every now and then... :)

hi anon....OK that's fine. But I live my life one day at a time, so a week at a time works for me. But we will defeat the Cons so you can give your grandchildren a better Canada...

hi anonymous....as I have said many times there is NOTHING more important than getting out the progressive vote. If we do we win, if we don't we could still lose. In fact during the election campaign that's all I plan on doing. I'm going to concentrate on trying to encourage as many young voters as I can. It's the best way I can contribute to our campaign, and I only hope I am up to the challenge...

hi rumleyfips...that is interesting news, and could be very good for our side. People forget that one of the reasons Harper has run his party like a tyrant is that it still is a fragile coalition. Power has cemented it, but as their poll numbers tank, the cracks will become more visible. I wish I lived closer to Northumberland so I could go there and stir up both sides against each other... ;)

hi Kathleen...I share your philosophy, and I do want a kinder, gentler, and more just world. But I am going to be very practical in the next election. I will cheer on all the progressive parties, but I will vote for the one in my riding that has the best chance of defeating the Cons. For we will never be able to do anything until we defeat them...

hi e.a.f....you know I had the same thought about that Russian freighter. If it had crashed on the rocks it would have been the end of Harper's oily plans. But I'm glad it didn't because the coast of BC is too precious a price to pay for getting rid of the dictator. The lesson of that near miss is only too clear, and we can still use it to defeat him...