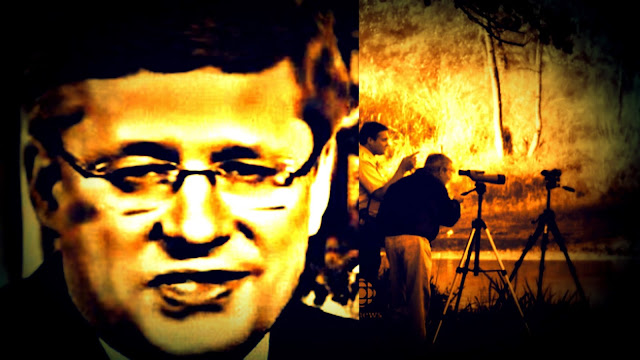 Then he came for those who fight poverty, and help the poor.

Now he's come for the birdwatchers.

A small group of nature lovers in southern Ontario enjoy spending weekends watching birds and other wildlife, but lately they're the ones under watch — by the Canada Revenue Agency.

The Kitchener-Waterloo Field Naturalists, a registered charity, is apparently at risk of breaking tax agency rules that limit so-called political or partisan activities.

Can you believe it? George Orwell would have been shocked.

And even Big Brother would have been impressed, or JEALOUS... 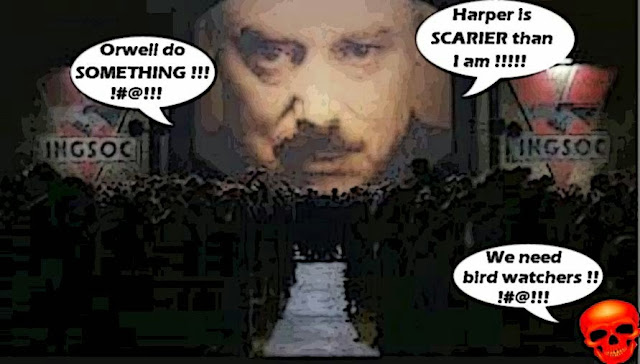 For what else can you say when a small group of gentle nature lovers are sent a threatening note by the sinister Charities Directorate of Revenue Canada?

Earlier this year, tax auditors sent a letter to the 300-member group, warning about political material on the group's website. The stern missive says the group must take appropriate action as necessary "including refraining from undertaking any partisan activities," with the ominous warning that "this letter does not preclude any future audits."

Threatened with an audit, and muzzled liked so many others in this country.

And for what CRIME?

For daring to write a letter to two Con ministers complaining about government-approved pesticides that are killing these precious little creatures... 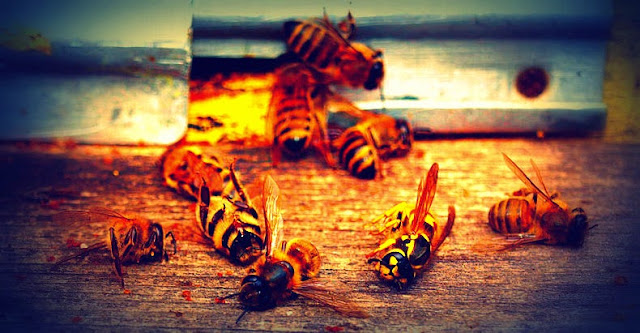 Who put food on our table. But are being wiped out in many places by crass human greed, while the Con regime does NOTHING.

For daring to speak out, in the most polite and quiet Canadian way, against the insane policies of that criminal regime.

The group, with annual revenues of just $16,000, has also had a guest speaker to talk about the oilsands, and has publicly defended the Endangered Species Act from being watered down.

And for daring to complain to the pathetic Big Oil stooge Leona Aglukkaq. Whose claim that Revenue Canada operates independently is as credible as her claim that climate change is debatable.

When only in a place like Orwell's Oceania would it not be clear that our Big Brother is using Revenue Canada like a blunt instrument, to punish and intimidate his enemies... 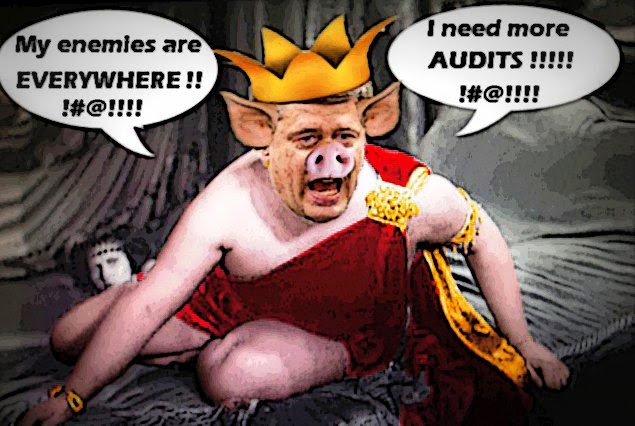 And by so doing, by any reasonable definition, is moving our broken democracy into the shadows of a police state, or a thug state. Where anything goes, and fear is used to try to scare Canadians into SILENCE.

And the good news? We are not afraid, we will NOT be silent. And this latest Harperland horror story will be used against him in the next election. And it will help damage him further.

Because it's the kind of story even the most complacent or dumbest Canadian can understand eh?

They might not understand democracy, but they do understand bees, birdwatchers, and AUDITS... 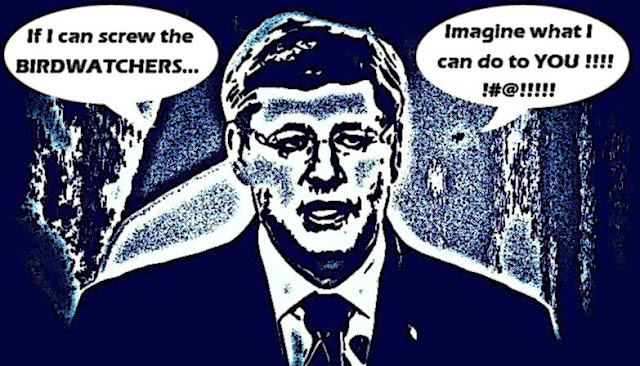 And after the situation is explained to them, and believe me we will, I'm sure they'll understand that they're NOT safer with Harper.

Because he is out of control, he is a vindictive maniac just like the first Harper to arrive in Canada.

And just like what happened in Christopher's case, NOBODY will be really safe until Steve is removed from office.

Which should make it easier to defeat him, and easier to rewrite this horror story.

But in this version Big Brother loses.

And it WILL have a happier ending... 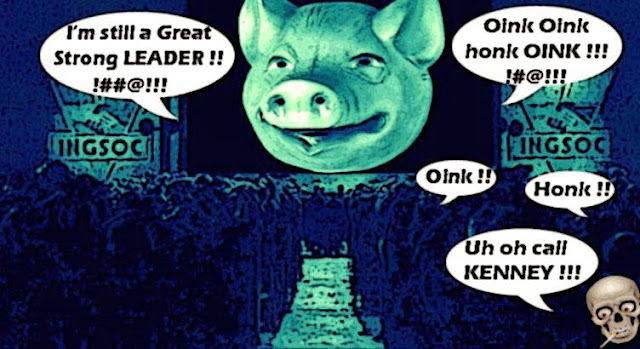 I
I'm sure that if you or I were a registered charity, Simon, we would already have been forced to walk the plank..I often wonder how long it will take before my Canada and Old Age pensions are threatened because of my 'partisan' activity..you know, exercising my democratic right to speak out, stuff like that..
I certainly hope that the birdwatchers are tweeting like crazy about this ridiculousness.... :)
A few years ago, I was making satirical comparisons to Nazis...now, not so funny....

RCMP sergeant Harry 'Snapper' Organs (Birdwatcher Division) commented to the press that, although the birdwatcher threat in Kitchener-Waterloo has been neutralized, "Canadians must remain vigilant against other 'sleeper cells' of birdwatchers spread across the country.". I. for one, am grateful to live in a country led by Stephen Harper (best Prime Minister ever!), who can protect us from the birdwatcher threat.

What about Harper's cat sanctuary? I certainly hope the CRA are harassing Laureen and Harper, regarding their cat sanctuary charity? We have all heard of cat burglars, have we not?

Harper has decided we don't need clean water nor food. Therefore, the birds and bees must pay CRA, for being alive.

yeah I could not believe how ridiculous it has gotten, and this makes the conservatives look even more corrupt. The problem harper has, is he wants control more then a benevolent leader image. He takes umbrage with everything and through that has passed down this ironfisted culture to his ministers, to his staff, to his attack dogs at various agencies, and its backfiring.
he should be going back to his little increments phase of taking over, but I guess he cant as he is desperately running out of time.

I hope harper and his minions read all of this, to see how funny we are all mocking his bs. Another term and he will have made us enemies of the state pay double the income tax and get zero benefits.

I've been sending this one to friends; wish I could turn up an article in French; all my google attemps have resulted in either official stuff or observation d'oiseaux sites. I may send it to Infoman, who does great satirical news stuff at Radio-Canada (he reads English).

A problem with this story is that it would be very difficult to satirise. Though perhaps Rick Mercer or Infoman could give it a go.

hi mizdarlin...you're right, if we were charities we would have been targeted like all the others. And yes, the big question Canadians should ask themselves is if the Cons are setting Revenue Canada upon groups, who is to say they won't sic them on individuals. And how will we they know or we know what's happening?
It is simply beyond belief that the Cons are using the power of government to punish their enemies, and for that alone they deserve to be removed from office, for no democracy can survive that kind of behaviour.
But as I said in my post, it will only helps portray the Cons in an even worse light, and in the end they will only hurt themselves...

hi anon....well if you put it like that, I must agree. This deadly birdwatcher threat must be neutralized !!!! I mean can they explain why they all carry binoculars, like ISIS? And isn't it true that birds can transmit Ebola ???? So how do we know that they are not training the birds to attack us???? Yes, I too am grateful that we have Great Leader and his captive kittens to protect us...;)

hi anon...well as I just told that other reader, that cat sanctuary may have a more sinister purpose than even I had imagined. And of course the Fraser Institute is a virtual hotbed of right-wing political activity, and strangely enough it hasn't been audited. The whole thing is a farce, and all I can say is when the Con regime is toppled, the CRA bosses are going to have some explaining to do...

hi deb...yes you've put your finger on Harper;'s dilemma, how to behave like a thug and still be loved by his grateful nation. And yes the more desperate he gets, the more the mask keeps falling off, and the real Harper is revealed. Which is something I welcome, because it's time more Canadians saw the real things, and understood how much of a threat he is to everything good in this country. We really have to thank the Cons for giving us so much ammunition to use against them. I certainly plan to use it ALL... ;)

oh I so hope rick mercer does a skit on this, it will be brilliant.

Speaking of Rick Mercer... his latest:

Simon, here: http://montrealsimon.blogspot.ca/2014/10/the-con-regimes-republican-assault-on.html you claimed that when you're wrong about something, you issue corrections and apologize.

You say, "And if I'm wrong about something I welcome those who challenge my facts, and will apologize if I'm mistaken."

With reference to the birdwatchers, I had suspected that what happened was that the government requested that the Canada Revenue Agency take a closer look at charities political activities. Personally, I think it reasonable to ask that registered charities do charitable work, and not political work. But regardless of my personal bent, your post suggests that this particular action has a vexatious motivation. Will you now attempt to argue that the CRA supposed to ignore the requests of the government which they're supposed to serve?

But returning to facts, the CBC indicates that this intiiative began in 2012: ttp://www.cbc.ca/news/politics/harper-rejects-charges-of-bias-in-cra-s-scrutiny-of-birdwatchers-1.2806620

"The Harper government ordered the Canada Revenue Agency in 2012 to launch a program to closely scrutinize the political activities of charitable groups, and some 52 audits have begun since."

Therefore, because I know how government works, the evidence seems to indicate that Stephen Harper did not, in fact, have direct knowledge that the CRA was going to send a bureaucratic nasty-gram to the birdwatchers. Therefore, your accusations are without merit, and your facts are at best, a collection of half-truths.

How can it possibly be vindictive is this was initiated well-before the present day? Unless you have documented evidence that the PMO sent an order to the CRA saying, "send them a threatening letter," your entire argument is hearsay, and not based in facts.

Will you now live up to your word and issue a correction and apology?

Team building activities helps you to realize the fact that your team succeeding is better than you doing so by yourself, because you are ensuring that you have the right kind of people working with you. Furthermore, these team building exercises also help build bonds within the company.