Stephen Harper, The Great Fear, and the Great War on Justin 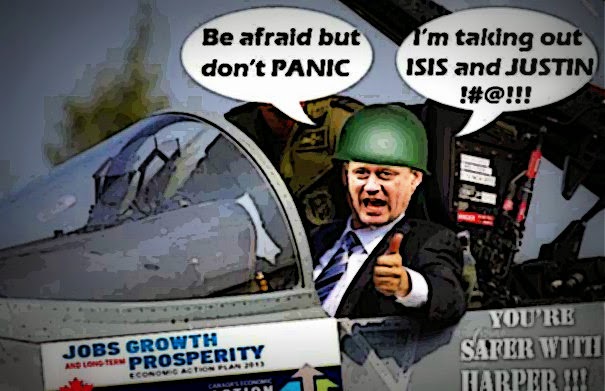 Uh oh. Now we really are at war again. The ominous signs are unmistakable.

The CF-18s are on the way to the Middle East.

To save us from the ISIS hordes that would behead us in our beds. Or mow us down in a Tim Horton's parking lot.

Because you're not safe anywhere eh? And even if you arrest them you can't stop them.

The dreaded Threat Level, which I didn't even know existed, is glowing yellow.

And in the Seventh Sign of the Apocalypse, Stephen Harper has just fired another missile out of his rear orifice, in the general direction of Justin Trudeau...


Which tells us all we need to know about what this exercise is all about. It's just a grotesque attempt to use fear to win votes. And use Justin Trudeau's CF-18 comment against him.

Even though the new attack ad couldn't be more misleading.

A quote from a Kelly McParland column in the National Post leaves out a part of a sentence that softens the criticism.

A headline taken from QMI declares "Opposition to Iraq mission bizarre." However, the column criticizes the NDP as well as the Liberals and does not mention Trudeau by name even once.

It not only twists Lawrence Martin's words, it leaves out some important information:

The Tories may also not want Canadians to look too closely at Martin's column. Though the writer is critical of Trudeau's stance on the Iraq mission, he also states that "Mr. Harper can be faulted for shamelessly trying to play the fear card in suggesting there is a direct threat to Canada from Islamic State." Not exactly unequivocal support for the prime minister.

And despite Harper's attempts to whip the CF-18 comment into a major issue... 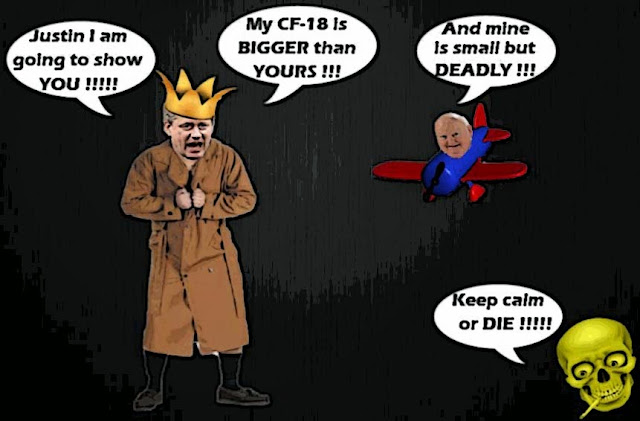 As only that depraved leader could.

According to a new Abacus poll most Canadians agree with Justin... 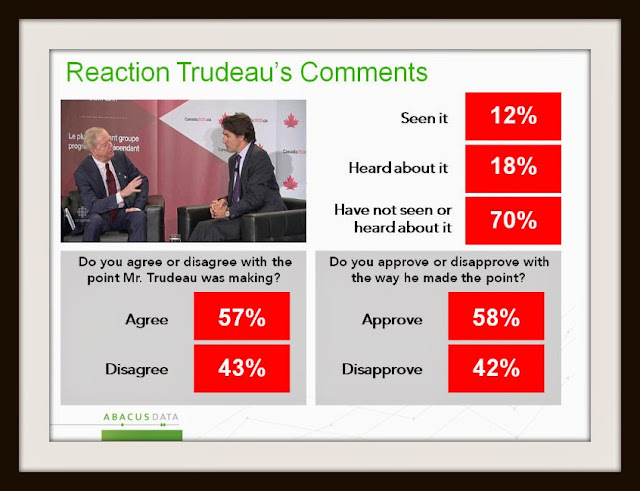 And in my humble opinion this is the real threat

Jenni Byrne, the deputy chief of staff to Prime Minister Stephen Harper, has been chosen to lead the Conservative party’s national campaign in next year’s federal election.

Because with that PMO attack dog hog running the Con campaign you know it's going to be FILTHY...

And that the election could still come sooner rather than later.

But what I found most interesting about this latest attack ad is that it stole the staircase scene from one the Cons ran FOUR years ago.

As well as the absurd notion that in a dangerous world we need Stephen Harper to protect us...

Which tells me that the young fanatics in the PMO are already out of ideas.

Or that they are too tired, too crazy, too desperate, to think about anything but saving their cult leader. Like bees in a hive guarding their queen.

Or that they find that image of Harper wearily climbing the steps deeply SYMBOLIC.

As well they might, considering how low they are in the polls... 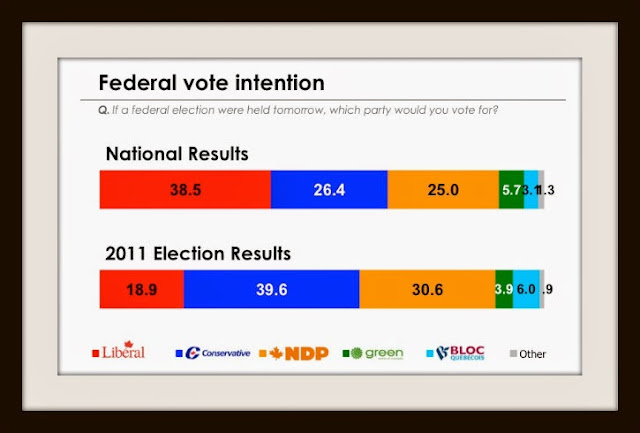 And the way the Anyone But Harper trend just keeps gaining momentum.

Support for the Conservatives has been off the party’s 2011 score by a significant margin for more than a year. Over that time the anybody-but-Harper trend has gained momentum. Until now it had been widely assumed that if and when the Liberals faltered, Conservative fortunes would recover. But when Trudeau tripped last month it was Mulcair and not Harper that got a bit of a hand up.

Or maybe it's just that subconsciously at least, they too realize that this horror movie is going to end badly.

Like it did for poor Martin Balsam in the movie Psycho. You know, the movie Harperland was modelled after.

When after climbing all those steps in that creepy mansion, he had a fatal encounter with Tony Perkins.

And went flying down the stairs backwards... 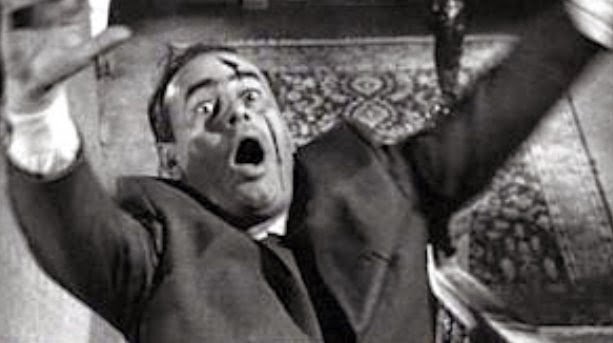 As Stephen Harper also will, after his painful encounter with the ugly TRUTH... 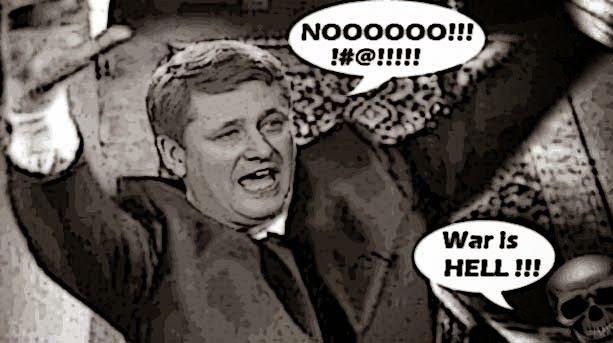 Which is, that NOTHING will save him now. Not even fear or his Big Lies.

He's just not up to the job eh?

His time is almost over.

My eyes and ears are OPEN, but, alas, my 65 year old brain can only muster so much info at a time! They say laughter is the best medicine and I've had a good laugh this morning.........
I refuse to let all this BS bring me down, so I've taken out my CF-18 and dare anyone to try their fear mongering around me!!! haha Does this sound like "panic"? Maybe I better tone this down a bit????????

Harper is going to spend over $100 million of our money on information I would call purely partisan and reefer madness.
IMHO every time you see advertising from a goverment it should be considered corruption.

hi anon...good, because that's exactly how I feel. I refuse to let the Cons try to scare me. And while I will take all the time necessary to expose their little machinations, I intend to keep on mocking this degenerate regime as much as I possibly can. I started of writing a deadly serious post, and then I thought no. At this crazy time we all need a laugh. At least I do.... ;)

I bet with the shooting the warning isn't yellow, but red now, abit more understandably.

And its good that Canadian are starting to see through Justin and seeing its Tom Mulcair who deserves to be PM, hopefully that only grows.

Simon, the terrible events, esp murder, at Ottawa today have handed Mr Harper the next election. Sad for the victim & his family. Sad for Canada. Sad for our pale blue dot.
-an older sister

Is it really Harper and his bumbling mob you want to lead us through danger? Not me. They have messed up everything they have done so why should I trust them with my security. They are not doing so well at it.

I do not agree with that statement. Far from handing Harper an ironclad election victory based on today's tragic events I believe Canadians will see this incident as something that has occurred on *his* watch and therefore supply voters with even more reason to show him the door. Harper can not escape the fact that his ideological hardening of our Canadian identity has contributed to today's events. The strong leader protecting citizens from the world's evils? LOL. There are maybe 30% of Canadians that agree with that fantasy. No, this might not be the proverbial final nail in this creep's electoral coffin, but it's a nail nonetheless. Take it to the bank.

The only thing which has made Canada "unsafe" is Harper and his big mouth. Today a reservist was shot and killed. Personally, I expected something like this to happen right after P.M. "lets go to war and kill them" harper volunteered to send Canadian jets to the middle east. Canada wasn't asked, harper and his big mouth volunteered. Now we have the result and harper has his election issue. He also has the means and motive to restrict our Canadian democracy. More listening, to catch the terrorists.

I still feel safe in Canada. You see I know there has been one driver who ran over two military personnel members and one died. I know one solider died because he was shot. I know 1,200 First Nations women have been murdered/disappeared over the last 30 yrs. I know what the rate of murder is as the result of domestic violence is. In the past yr we have had 81 deaths from distracted driving in B.C. We can all decide what is most dangerous for ourselves. Me I have a better chance of being killed by a distracted or drunk driver. Some will have a better chance of being killed because of big mouth harper's and his lust for going to war.

While P.M. "lets go to war and kill them" harper was flapping his gums about going to war and killing terrorists, he cut the military budget. He talks a lot but delivers little. If todays shootings were not the result of one mentally ill person, but rather the result of an organized group, they did it to Canada, because places like Australia, England, France, U.S.A. etc. are all better prepared. You see their P.M./presidents don't just flap their gums. They deliver.