Harper's War and the Delusions of Salvation 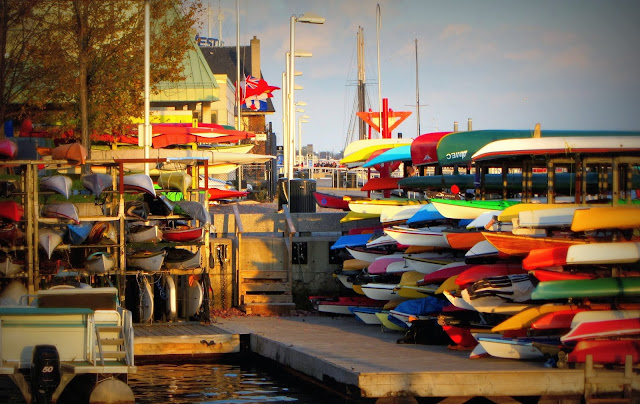 It was a balmy 17 degrees, and my little corner of Canada looked very much like it always does at this time of the year.

But the flags flying at half mast to honour our two murdered soldiers reminded me that this is no ordinary fall.

We're at the beginning of Harper's War, we've just suffered our first casualties, Great Strong Leader wants us to believe that we have been attacked by the Caliphate hordes, instead of by two mental patients.

And that only he can save us... 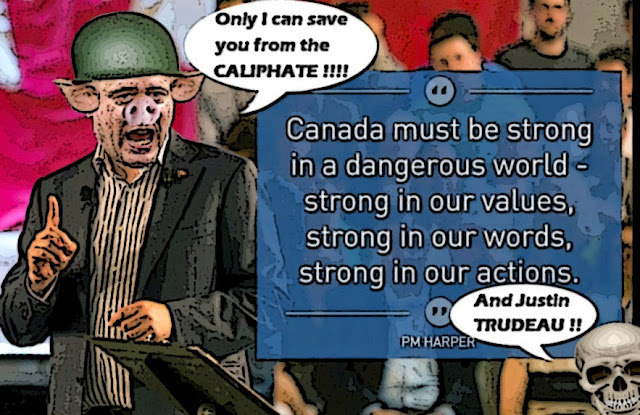 If we surrender our freedoms, and our privacy, and our e-mails, to him and his secret police.

And to make matters more even more alarming, Jeffrey Simpson has been trying to cause mass panic by practically screaming "Stephen Harper could STILL win the next election !!!!!!

A year from now, Stephen Harper could be rearranging his cabinet, planning what comes next and savouring yet another election victory, chants of “four more years” still ringing in his ears:

Mr. Harper might well be toast today. But toast tends to pop up at a fixed point in time. So what does he have up his sleeve? Plenty, and Harper-haters ain’t seen nothing yet.

By suggesting that Harper could pop up again, like a toast. 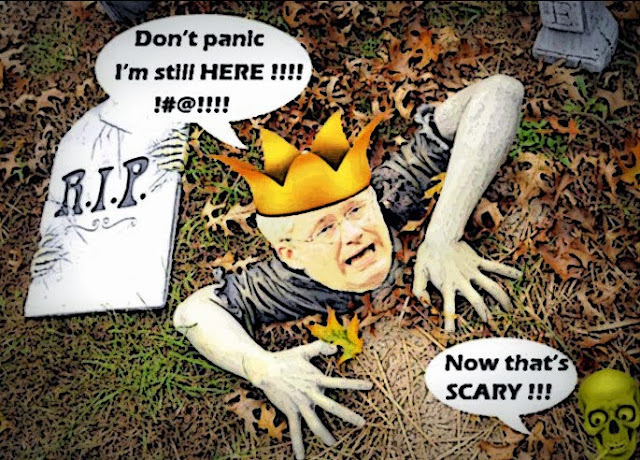 And by making the forces of the ISIS crazies sound puny by comparison.

But what's so striking is that Simpson, as Noah Richler points out, seems to have swallowed Great Strong Leader's warlike agenda hook, line, and sinker.

Even as sensible a columnist as Jeffrey Simpson stooped to describing Justin Trudeau’s past talk of “root causes” as “puerility” and the more cautionary attitudes of the NDP and Liberals towards a strictly military response in the Middle East — their job, after all, to be in opposition — as “blue-skied narratives of peace and progress.”

When in fact a humanitarian role in the conflict with ISIS would be just as legitimate, and definitely more Canadian, than joining in a symbolic bombing campaign.

And Simpson also seems to forget Harper's ghastly record which WILL pursue him all the way to the next election... 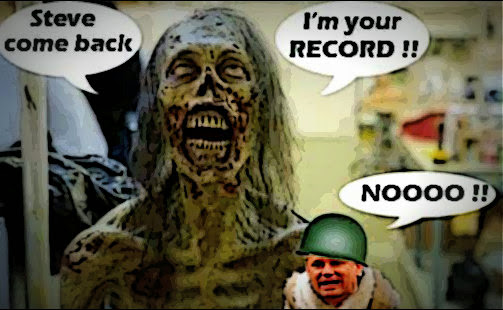 Or the fact that he has been around for so long that most Canadians are desperate for change.

Or for that matter, the fact that the Cons are always having to try to cover-up their mistakes.

The Conservative government appears to be quietly shelving its controversial “Common Sense” gun bill in light of Wednesday’s shooting.

Or trying to do dirty things when they think nobody is looking.

Buried in the Harper government’s latest massive, omnibus budget bill is legislation that could restrict the ability of refugee claimants to access social assistance.

It was tabled Thursday – while the attention of virtually the entire nation was focused on the wild shootout that had occurred a day earlier in Parliament’s Centre Block.

And of course, let's not forget this story... 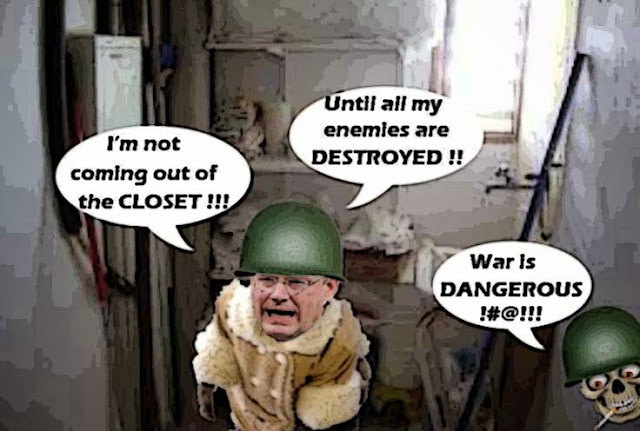 
And will make it hard for Harper to pose as a Great Strong Leader.

And if he was hoping to stir up hatred against Muslims, and use them as a wedge issue, well so far so bad.

Canadians will insist on being Canadians. 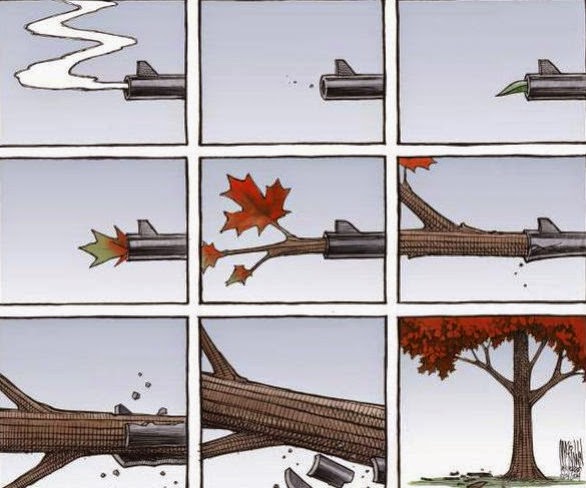 And yes, Canada is still Canada... 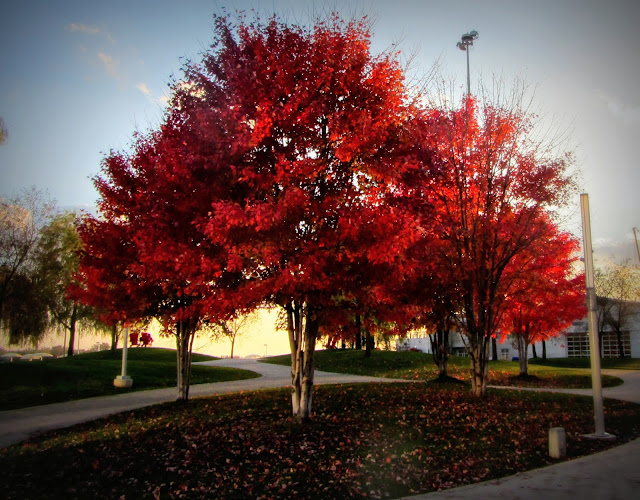 We don't have to change anything except the Con regime and its depraved leader.

Salvation is a delusion.

And NOTHING will save them...

Having faith in Canadians is best. Many are seeing this for what it is. Mentally unstable people killing.

As long as the other political parties continue to remind voters of harper and his herd's record, they will be tossed.

While we have harper and his herd "making hay" on this, we do not have harper and his herd doing anything to improve the lives of Veterans from the previous middle eastern wars. Now its nice to have all these accolades for the Armed Forces but I'm sure the Veterans are thinking/saying, show me the money. Talk is cheap. Your bank account is forever. Canada ought to be ensuring Veterans receive the income and benefits they are entitled to.

We have harper and his herd and citizens of all parties commending all the police who worked on this case. Now what happens when they need help for mental health issues this event brought on? Based on the country's track record? NOTHING.

Following Camamaroon is insanity. Harper would only do that if his goal is to create a permanent malleable enemy at home. Like introducing mosquito to Muskoka. An annoying source of unity amongst cottagers.

I just about threw my cookies when I saw that wannabe tough guy, screetching on a break in the hockey game on Saturday that our soldiers are wonderful (fine, I agree) and we, get this, we must support them with our, get this, our donations to help them get jobs and other help now that they are back from the front because he (the great Grape) is sending his money right now! What a creep! Why wasn't he hounding is very best friend, PM Harper, to make sure these soldiers who have been abandoned by our government once they return home from these awful non winnable wars?

"When the election is called, you’re going to see some large fallout, believe me,” veteran Ron Clarke told the Herald.
"As soon as the writ is dropped, we are in action."

hi e.a.f...yes the way the Cons treat the military is outrageous. They heap praise upon them when they need them, and ignore them when they don't. I've read quite a lot of some from veterans recently, and believe me they're not impressed...

hi Lulymay....yes I saw Don Cherry in his most sober suit ever banging his tin drum, or at least I read about it. I refuse to listen to anything he has to say about hockey because he has nothing useful to say, and his vision of the game is not mine. So should he pop up on my TV screen he's gone as soon as I can grab the remote control.
Cherry on hockey is unbearable, Cherry on war is intolerable...

hi David....yes I have practically memorized that quote. And I can't wait for the campaign to begin....

hi Steve...the entire Con regime is insane. Ther is no other word to describe them. And the fact that so many Canadians still support them is truly disturbing. You really can fool some people all the time...

Common Sense does Not prevail in Canada at the moment! However, we must have faith in our Canadian citizens that all will be well in the end. I haven't given up HOPE! IF I do, I might as well be dead!
So, let us march on and be PROUD of CANADA!