The Con Regime and the Outrageous Muzzling of Omar Khadr 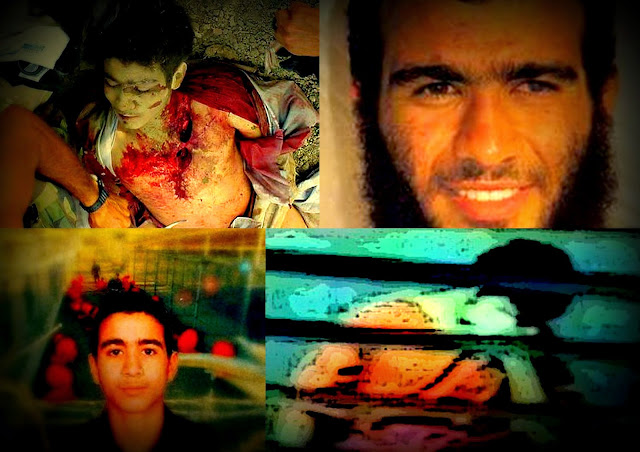 Omar Khadr is Canada's most famous prisoner. Thousands of stories have been written about him all over the world.

So we know how the former child soldier was victimized by his family, the American military, and even his own government.

We know he was horribly wounded, then tortured, and that he has spent almost half his life behind bars or barbed wire.

But in those thirteen years this is the only time we ever heard his voice...

But so great is Stephen Harper's hate for him that STILL he would muzzle him. 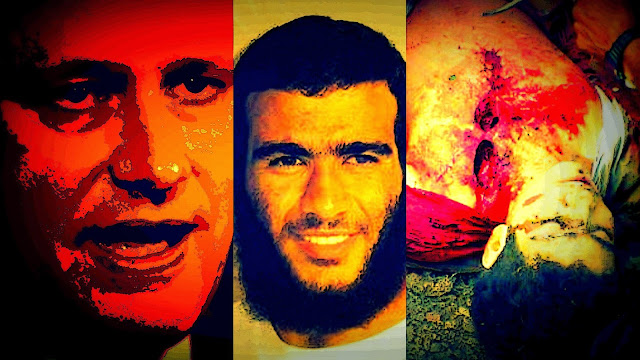 Corrections Canada claims an interview with Omar Khadr would require unprecedented security precautions, including a prison lockdown, despite the fact that the 28-year-old often receives visitors and has been described as a model prisoner.

By getting his flunkies at Corrections Canada to distort the regulations in the most outrageous manner.

“Omar has seen a reduction of his security level from maximum to medium in the last year, and yet the government is suggesting it will require extraordinary security measures to allow him to speak to the media? No other prisoner would be gagged in this way,” said lawyer Patric Senson, who is representing the Star and other parties.

You know, I've written a lot of posts about the case of Omar Khadr. I've compared it to the Dreyfus case in France. I've called it a travesty of justice, and a shameful episode in this country's history.

And I've written about how appalled I was to see that so few Canadians supported him, because so many hated his family. As if that should have anything to do with it.

And even though in the opinion of everybody who has met him, from his Guantanamo guards to his teachers, he is not like his family.

He is a pleasant, gentle, friendly person... 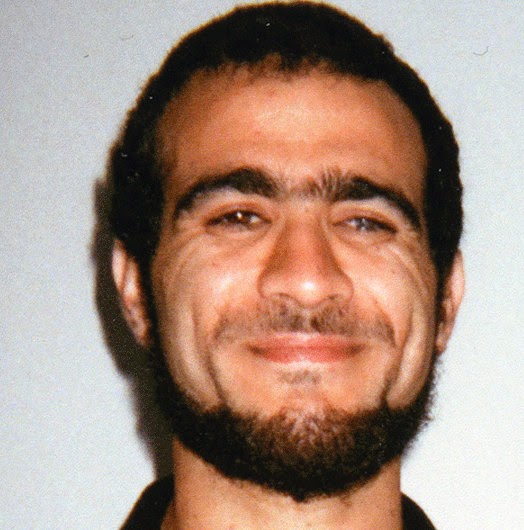 And even though he is still riddled with shrapnel and blind in one eye, hopeful about a better future.

But to those who felt that way about him I always said, if you allow your blind prejudice to distort the laws of the land, one day they could be bent to convict and punish YOU.

If you allow a sadistic control freak like Stephen Harper to muzzle a Canadian child soldier, after allowing him to be tortured, he will think he can get away with ANYTHING.

And YOUR turn will come.

As it has for so many Canadians. 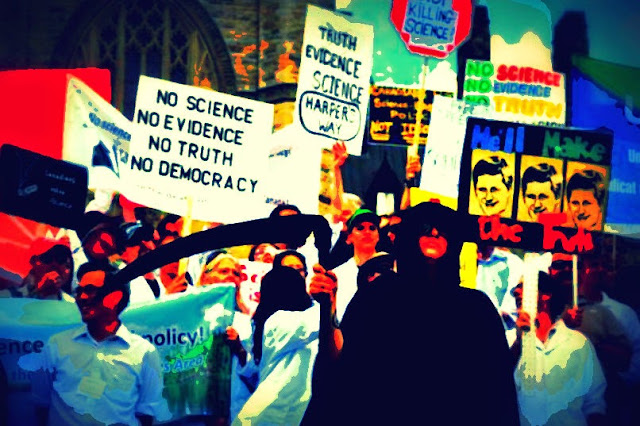 What was striking, when all the evidence was laid out, was how successful Prime Minister Stephen Harper has been in silencing individuals and agencies that challenge his ideology or track the impact of his decisions.

And what I would say now, is that when Corrections Canada makes political decisions to please their Harper Con masters, just so they can keep torturing a Canadian citizen on the altar of their rabid base, is that we're getting pretty close to living in a police state.

And of course, what I always say eh?

Deliver us from shame.

And before he jails us all. 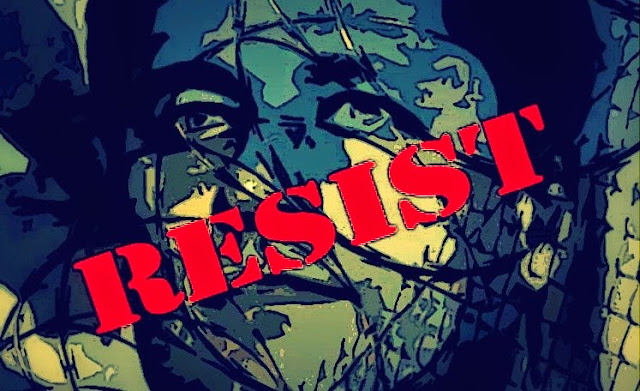 Thanks for your great article Simon. Omar's 13 years of illegal imprisonment, since age 15, is Canada's shame. Also don't underestimate the role of the Canadian media. Even the article that you mention is FULL of lies. The reporters probably have their own reason to further abuse and exploit Omar by writing the falsehoods about him. As a result, they influence the public opinion with their lies and they please Harper. On our Free Omar Khadr Now Campaign website you read how Gail Davidson of Lawyers Right Watch slams the Star article that you quoted: http://freeomarakhadr.com/2014/10/04/gail-davidson-of-lawyers-rights-watch-canada-slams-the-stars-coverage-of-omar-khadr/

A quote from the above site: “I went into Guantanamo Bay as a lawyer and I came out as a broken father.” – Dennis Edney.

I attended Dennis Edney's visit to Winnipeg on September 19, 2014. If only our politicians had half the courage and compassion of this man - we would most certainly live in a much more decent society.

During the Q&A, one man in the audience rose and spoke through tears of rage. He began by explaining that his wife was so overwhelmed by grief for Omar that she could not attend the event. It was uncomfortable but eye opening. My outrage is on an intellectual level as it is for the shootings of Michael Brown and Trayvon Martin before him. I guess for that man in the audience and his wife, and for the many people taking to the street in Ferguson, there is a visceral connection - "that could be my son".

hi there...I'm sorry to read that the Star article I quoted got its facts wrong, since its been one of the only MSM outlets to show any interest in Omar's case. To tell you the truth I didn't even notice the errors, since I don't recognize the kangaroo court Omar was forced to endure, and all its judgments are not worth the paper they're written on because he never should have been tried in the first place because he was a child soldier. But the good news is that Omar is looking very good, and he has the support of many, and hopefully his nightmare will end soon...

hi Beijing....You're absolutely Dennis Edney has been terrific, as have some of Khadr's other lawyers. They have upheld our country's values, in this great darkness. I am happy and proud to have supported Omar for so many years, especially since it was such an unpopular cause, and it greatly depressed me that my posts on Omar were almost without exception my least read posts. But as I told the other commenter, I am glad he is looking so well, and hopefully his day of freedom will come soon...

Canadians in general are just as abysmally ignorant as their Yank counterparts..they support Harper's little war plans, they think that Khadr should just rot in jail..more support for that than there was for Bernardo or Olsen to stay in forever...and I'm wishing that some other voices besides ours, someone with some actual media clout, would come forward and say this is tragic, this is wrong, and challenge our Fuerher on the subject and continued imprisonment of this man..Harper's legacy will be a nasty one, but this has to be right up near the top of the horrors he's foisted on us...

To vilify Omar Khadr, is simply to continue with harper's war on anything which isn't like him. We have people who murdered 1,200 First Nations women and nothing is being done. (well the murders aren't being solved) yet we have someone who got tossed into a 'prison' as a child and kept there for going where his family told him to.

The case of Omar Khadr is a stain on Canada's reputation. it puts us squarely into the camp of countries such as Saudi Arabis, Syria, Russia, China, the list goes on. harper and his herd are an embarrassment to Canada. Put the "majority" voted for him so the rest of us have to "live with it" and some of us will die because of it.

To deny the press access to Omar Khadr clearly violates our freedom of the press, speech, our Canadian values as they once were. We can only hope that one day harper and his herd are tried for treason.

Omar Khadr will soon be equated with the ISIS jihadi terrorist scourge in the ME... and soon to be active in Canada as homegrown terrorists. If Omar is released and speaks out against the Harper Conservative, you can bet that will help the Cons in the next election.... since Omar is suing the Canadian taxpayer for some $24 Million for his "torture in Guantanamo". Of course the SCOC will uphold giving Omar his well deserved Million$$$$$...!

I wanted to be careful about checking out the Free Omar website. If the reference is to .com and the site shows .ca, I'm going to check with other sources, which I did. From Rabble, which is about as trustworthy as you can on this subject, I found the Free Omar Now link. It leads to a .ca site, just so others know. The Rabble article is "What has happened to Canada?: Speaking with Omar Khadr from prison" by Aaf Post. (http://rabble.ca/news/2015/04/what-has-happened-to-canada-speaking-omar-khadr-prison)

I didn't like the Star's editorial recommending that Omar be left alone by the Canadian government rather than persecuted by it. I'm grateful that the message from the Star is 'not' the exact same message as from the fascists in power here, mind you. But the Star is a fake friend of the people, a few good journos there notwithstanding.