Testing the Tolerance of Canadians 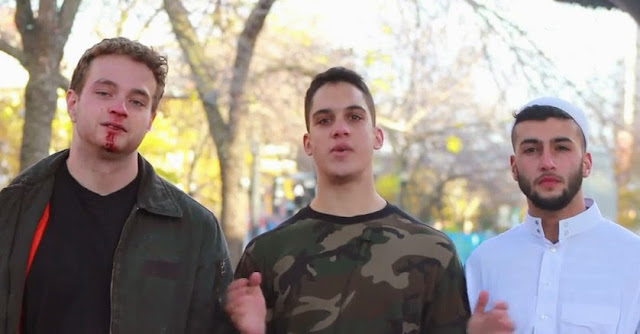 It was an interesting idea. Test the tolerance of Canadians at a bus stop in Hamilton, Ontario.

And although it was a little crude, and it did end bloodily, the results were encouraging...

It does show that some Canadians at least are not prepared to blame Muslims for what happened in Ottawa and Quebec.

And that some at least aren't buying Stephen Harper's claim that we are dealing with a real terrorist threat.

And since this social experiment took place in Cpl. Nathan Cirillo's home town, and the video now has more than 650,000 views.

I'm declaring it a big victory for Canada...

And of course we can all do our part. By making sure that we make every effort to reach out to our Muslim fellow citizens.

Or just give them an extra warm smile like I'm doing.

It's not a big thing eh?

But at a time like this one it can send a powerful message:

And we're all in this TOGETHER...

WE ARE ALL IN THIS TOGETHER! Do Not let POLITICS DIVIDE US!

In a small Alberta city, a Mosque was vandalized. The people in that town all got together, brought their scrub pails. They cleaned the hate literature off the walls and replaced all of the smashed windows.

There are many decent Muslim families, that just want to live in peace and have a safe place to bring up their children.

We are all very sorry to the heart, for the deaths of our soldiers.

However, Harper never cares about anyone other than Harper. His behavior is contrived and so is Kerry's. He said, the 3 Amigo's met in April and said, this was a step closer to the NAU. None of this passes the smell test.

Stevie slime looses! It is clear his politics of division will not work. He may push through his legislation, because the cons have a majority, but people aren't going to like it. with any luck, his cons will screw this up, attack some Canadians and get kicked out of office.

This "terrorists" threat, isn't a threat. Is just life, especially when you combine mentally ill people with today's society. add some drugs, shake well, viola, problem. Not terrorism, social problems that can and do turn violent.
In B.C. you are much more likely to die from distracted driving, 81 last yr. and drunk driving, 80, last yr. The response to distracted driving, larger fines and demerits, so you could loose your license. Not a thing about being monitored, having your passport taken away or your car, etc.

The real terrorists in Canada are the cons and their policies. Just like when harper said the murder of 1,200 First Nations women wasn't a societal problem, it was a criminal issue. Well that is terror for First Nations women. Guess they don't count in stevie and his con's world.

The first Mosque in North America was built in Edmonton, Alberta. Naheed Nenshi, the Mayor of Calgary is also a muslim. I think that most Canadians when it comes down to it are inclusive and respectful of other races and religions. We just need in 2015 to vote in a government that is the same as us.

hi Kathleen...yes I do like that slogan, all we need to do is change POLITICS for HARPER and it should be perfect... ;)

hi anon...yes, I mentioned the story of that Cold Lake mosque in a previous post, and it made me feel really good about my country. I have read some vicious comments about Muslim Canadians, and they totally disgust me. The Muslim community has held several vigils to show how they feel about that senseless violence, and that's MY Canada...

I was really happy to see that video, good for canadians! The one feisty older gentlemen was great, saying he used to blow up things, and he isnt muslim.lol

Society has run amuck.......amok(adv.) on the rampage in murderous frenzy, to run amok.......according to my Oxford dictionary.

An even better one: terrorism (noun).......use of violence and intimidation, especially for political purposes.

What exactly does it mean to be "educated" today?

hi e.a.f...Stephen Harper's ravings about the caliphate coming to Canada has already done quite enough damage. It has caused a rise in anti-Muslim feeling, and it's made the tea baggers in the U.S. look at us with alarm, think we're a terrorist base, and talk about tightening the border. Not bad for just a few weeks. The Cons are not only the real threat ,they're making it up as they go along...

hi Pamela...I like to think Canadians are more inclusive and sensible than the Americans. Although I deplore all religions, I will embrace all decent religious people. And since the Muslim community has been forced on the defensive because of the actions of those two mentally ill killers, we all need to support them...

hi deb...yes I too though the elderly gentleman was great, quick to intervene and say what needed to be said. I'd like to think that if I was ever in a situation like that I would react like he did. But unfortunately, with my fiery temper, I might be tempted throw a punch or two.... ;)

hi Kathleen...I don't know what it means to be educated today. But when i see the state of Canada and the U.S., especially the U.S., I wonder how so many people could be so ignorant. I think you asked me the other day what I feared the most. And I should have put ignorance at the top of the list...