When the Con Attack Machine Goes after the Media 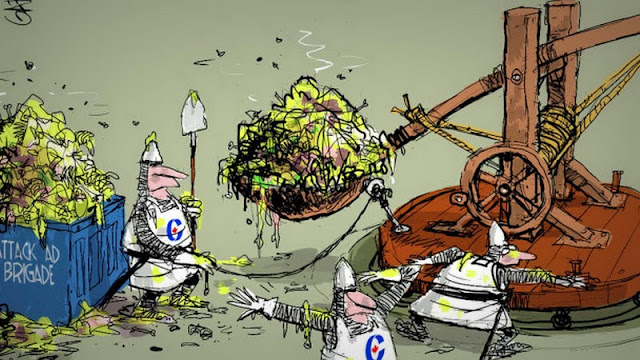 It may be hard to believe, but it looks as if the smear artists in the PMO are worried about running out of ammunition for their legendary attack machine.

So they're making plans to "borrow" some from the MSM, without their permission.

The Harper government is preparing to alter copyright law in Canada so politicians can use news footage and other journalistic content for attack ads and campaign spots without asking broadcasters or publishers for permission.

CTV News, citing a memo to cabinet, reported Wednesday night that the government has been working on a new “copyright exception for political advertising” that would be inserted into a budget implementation bill.

And what I take from this latest muscle job from the Con mob are four things:

(1) They are now so consumed with the election campaign, and so desperate, they are willing to pick a fight with the big media organizations, alter copyrights laws, and ram the needs of their porky propaganda machine into a budget bill.

(2) They are in such a hurry, and so desperate, they are making it up as they go along without even properly evaluating the consequences.

“Given its legal and political complexity, and the speed with which the exception was developed, there may be unforeseen circumstances that create unintended consequences,” it says, before advising “a strong communications plan will be required to manage vocal stakeholder reactions.”

The cabinet memo notes broadcasters would still be free to refuse advertising but, it added, during a political campaign the rules are different. “During an election, broadcasters must provide a certain amount of advertising time to political parties,” the memo says.

Not with Shelly Glover, the former police officer, leading the assault on the media... 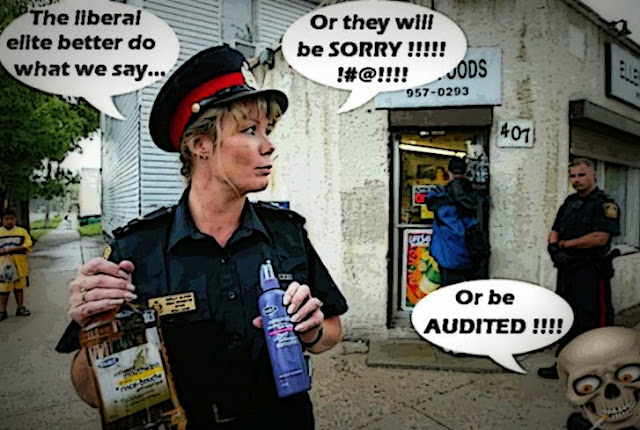 (4) The reason they want to be able to "borrow" those pictures is because their attack ads on Justin Trudeau in particular aren't working as well as they have against other leaders.

They're so phony and such obvious smears they are actually repelling viewers... 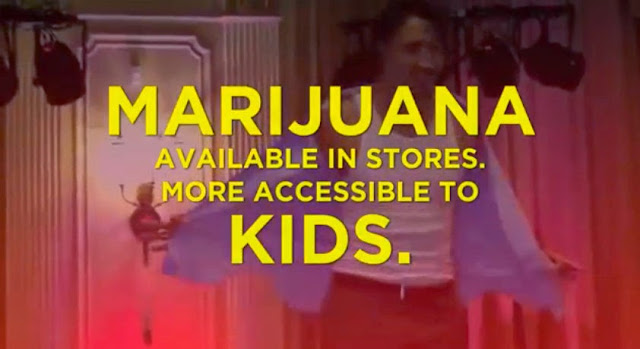 Because their attempt to create their very own news channel, with OUR money... 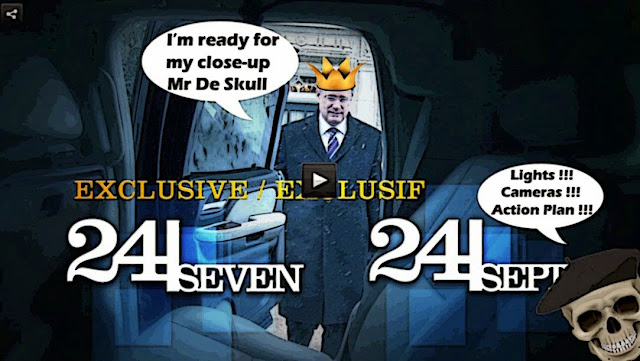 Has also been a dismal failure... 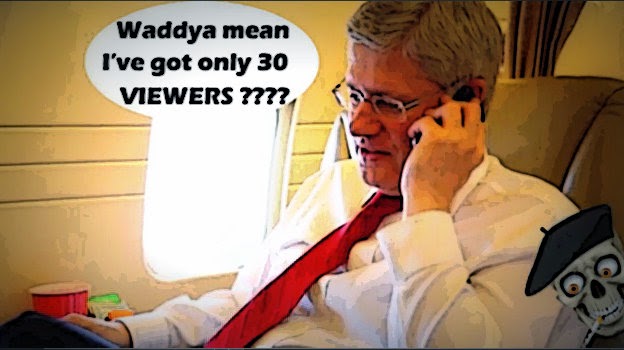 But of course, what all of the above really tells us is that we are about to be hit by the biggest and most savage attack ad campaign this country has ever seen.

They will go negative, and we better be ready.

And the good news? We've never been readier.

It will also be shaped by YouTube videos, since Canadians are huge consumers of online videos, and our side can make better ones than they can.

Even if we have to "borrow" their material to use their own words against them.

As I recently did, by taking Harper's voice from this absurd ad...

And giving it a different spin...

And that's just a crude example of what we have in store for them.

Some of the videos my more talented friends have already made are absolutely awesome. Or if you're a member of the sordid Harper cult absolutely BRUTAL.

And of course the possibilities are endless, since the Cons have given us soooo much material to play with.

Yup. The greatest attack ad battle in Canadian history is about to begin. 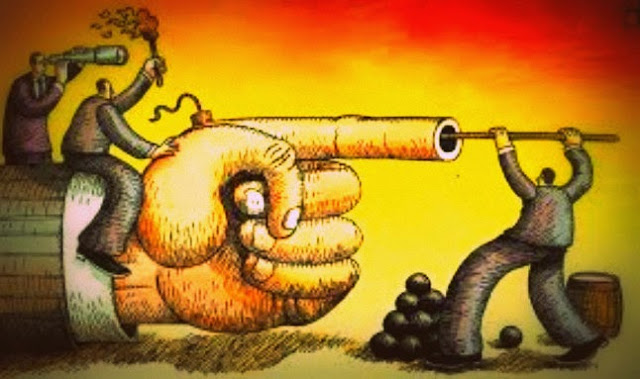 I read somewhere this morning that there will be a female president after Obama.......hmmmmmmmmmmmmmmmm.

Once this Con amendment is made, I propose that as a sign of protest, all Canadian media broadcasters, journalists, and reporters begin substituting "Harper regime" for "Harper government" in all news reports, articles, and on-air discussions (radio/TV).

harper told us we would not recognize this country when he was through with it and he wasn't kidding. Now he will start to alter our laws to assist him and his, in retaining power. It worked for Putin, why not him?

I am not a fan of big media. However, they have the right to protect their "work product". That is what it is, product of work. They paid for it, its their's. If they say you can't use it or you have to pay for it, that is capitalism. what we are hearing from the cons, they don't like capitalism. they want corporations to provide them with their work products for free. It is no different than if harper and his herd went a lumber company and said we like that wood, we want it for free. The company says no and the herd changes the law so they can legally steal the product.

harper and his herd's decision to change the law, is simply a way to steal some one's products. throw the bums in jail. If we can't jail them for treason, lets try theft over $5K.

Somebody leaked to CTV News the cabinet document (which would alter copyright law). So finally there is a small crack in the Con edifice. I look forward to reading more leaked documents!

(Or was a Con staffer told by the PMO to leak it?)

There is a crack, a crack in everything
That's how the light gets in.

And if the copyright change is crammed into a Con omnibus bill (with about a thousand other items!), then what's good for the goose is good for the gander.

As John Ivision said today on CBC's Power and Politics, there's probably more broadcast footage out there to embarrass the Cons than the other parties. I'd love to see an NDP or Liberal attack ad showing military spouse Jenifer Migneault and Veterans Minister Julian Fantino. Last May, Fantino ended a House committee meeting by fleeing from a crowd of reporters and Migneault, who was desperate to speak to him. Yelled Jenifer as Fantino fled: "We're nothing to you!"

hi Kathleen...well I am certainly in favour of that. We do need more women leaders to save us from the insanity of the men. However, while Hilary Clinton is definitely better than any Republican, she's also a bit of a hawk, so the improvement would only be minimal...

hi David...well I would certainly enjoy that, and it would be about time. I simply can't believe that after these years so many in Ottawa still treat it as just any Canadian government. When it is demonstrably different, and as Canadian as a three dollar bill...

hi e.a.f...as you know I am no fan of the MSM. But it's all we got, and I find the way Harper and his gang are treating those media organizations to be absolutely outrageous. They are the first to go on and on about property rights, but the first to ignore them. However the consolation is that the progressive parties would also be able to use that material and there is a lot more dirt on the Cons than they could use against us. And of course I intend to steal pictures from EVERYONE.... ;)

hi David...yes I saw that interview, and he's right. There is a lot more in that footage that would make the Cons look bad, than anything they could use against us. And yes Jenifer Migneault would be an excellent person to include in an attack ad. I've been in touch with her since I wrote the post about her encounter or non encounter with Fantino. And I've promised to help her and the veterans as much as I can...

The Harperites have learned that attack ads WORK! Their relentless ads against both Stephane Dion (2006) and Michael Ignatieff (2011) helped to get the Cons re-elected. Next year during the election campaign the Libs and the NDP have to fight fire with fire and produce attack ads.

Having said that, the Cons are so flushed with cash that their attack ad campaign will begin months before the writ is even dropped.

Don't forget the Con cabinet minister from B.C. who said it wasn't his job to feed the neighbours' kids when asked about child poverty. This could be interesting but it is doubtful the Greens, Liberals or NDP will resort to the types of ads the cons will and have.

I don't know how "flush" the cons are with money. yes they've collected from their "rabid base" but others perhaps not so much. People who work for the military and the feds are not going to be supporting them. Now that they've turned on the MSM you can bet they won't be supporting them either. Watch for a "change' in how the news is presented, watch the change in the words, etc. this ought to be fun. I think "big daddy" thought they'd just leap all over the chance to provide the cons with material. But the media knows they will have to survive another day and the population isn't that keen on the media right now anyhow.

hi e.a.f...I am hoping that the progressive parties come up with some good ads, but I'm almost willing to bet that the ones produced by Canadian artists, and spread all over the country on social media, will be better and more hard hitting. Now is the time for everybody to join in the fun, and let the Cons have it...

The CBC will be decimated by another Harper majority government after the 2015 election. They will chop the $1+Billion government subsidy to the CBC in half and then watch the CBC go through a painful death to the chagrin of CBC-lovers. 2019 will be a Trudeau majority government because of the killing of the CBC.