Harper's War: The Blood Moon and the Con Insanity 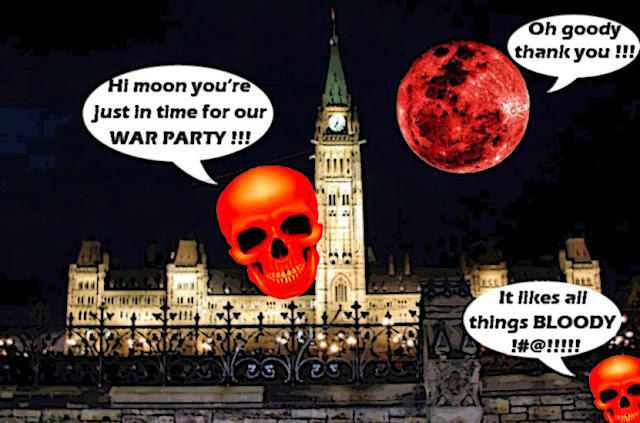 It's raining where I live tonight so I can't see the blood moon. But I'm sure if I was in Ottawa I would get a great view of it.

Hanging low and bloody over the House of Commons.

Because this was the day Stephen Harper finally got his War in Iraq.

And it couldn't have been a crazier show.

A divided House of Commons voted Tuesday in favour of sending Canadian aircraft and personnel to join coalition airstrikes in Iraq against Islamic State of Iraq and Syria targets.

"We do not take this step lightly. The threat posed by [ISIS] is real," said Prime Minister Stephen Harper in a statement released shortly after the motion passed by 157 votes to 134.

For there was Boss Harper, claiming that he was a reluctant warrior. That he only mounted the bloody beast of war to save us from being beheaded in our beds... 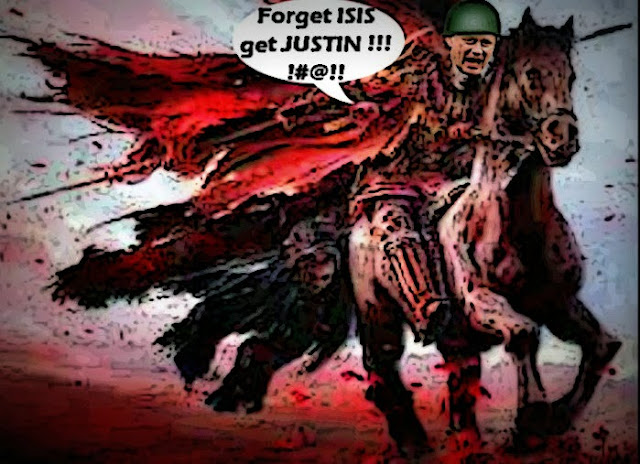 And that a bombing campaign, with a handful of planes, is the only way to shrink the ISIS monster.

"If left unchecked this terrorist organization will grow and grow quickly. They have already voiced their local and international terrorist intentions and identified Canada as a potential target."

When everybody knows that bombing alone will not stop ISIS, and that far from shrinking the monster, it's actually making it bigger.

The Islamic State jihadist organization has recruited more than 6,000 new fighters since America began targeting the group with air strikes last month, according to the U.K.-based Syrian Observatory for Human Rights.

A number of rebel commanders who oppose IS while continuing to fight the regime of Syrian president Bashar Assad have warned that the strikes are increasing local support for the jihadists.

Just like everybody knows that Stephen Harper was no reluctant warrior. He chased after the beast of war, mounted it with indecent glee, and proceeded to hump it for all it was worth.

So he can pose as a Great Strong Leader, who would keep us safe in our beds... 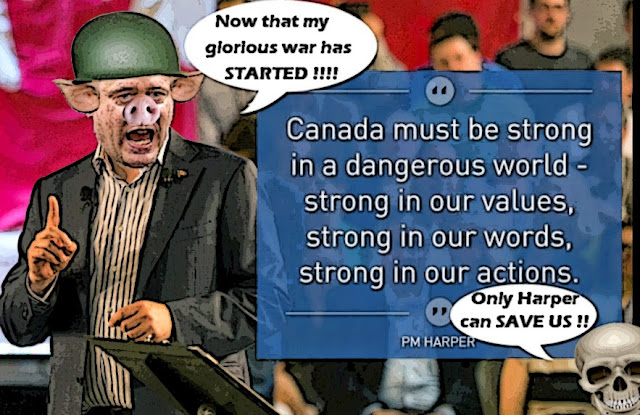 When in fact his obscene politically motivated posturing is making it MORE not less likely that terrorists will attack Canada.

His whole plan is more American than Canadian.

The vote in support of Stephen Harper’s decision to join allied air strikes in northern Iraq — and possibly Syria — was never in doubt. But Conservatives imported two distinctly American arguments in selling their plan to a divided House of Commons. In essence, they sold patriotism and fear.

And where did he ever get the idea that other nations are less patriotic than we are?

Not all allies have decided that international cachet means flying combat jets. Many are contributing humanitarian aid, an option often derided by Harper’s Conservatives as sending over some blankets. Germany’s Angela Merkel is one who has chosen blankets over bombs and no one is suggesting that Germany’s global voice will be diminished.

Still, it will be recorded that on this sad day, Tom Mulcair did his best to try to inject some reason into this insanity.

Mulcair's New Democrats had proposed an amendment to overhaul the motion entirely and switch the focus to supplying arms to local fighters battling ISIS and increasing humanitarian support.

By suggesting that we supply weapons to those who are actually fighting ISIS on the ground. Like the heroic Kurdish defenders of Kobane.

Islamic State (IS) militants have entered the key Syria-Turkey border town of Kobane and taken control of three districts after street-to-street fighting with Syrian Kurd defenders.

"They have surrounded us almost from every side with their tanks. They have been shelling the city with heavy weapons. Kurdish fighters are resisting as much as they can with the limited weapons they have."

Or by sending in the troops to help save tens of thousands of desperate refugees from the horror of the coming winter. 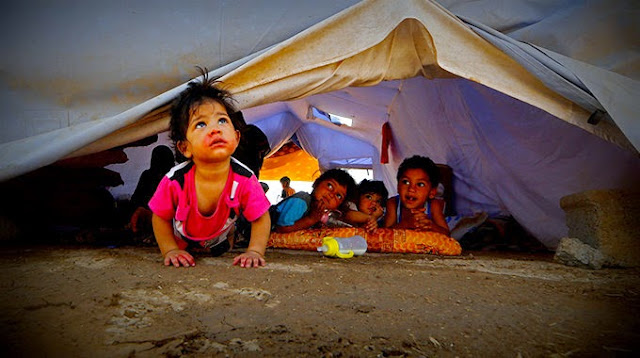 Thanks to the Kurdish Peshmerga forces that have secured the refugee camps, it is not ISIL that threatens the lives of the refugees I met in Erbil — it is the harsh winter conditions that will take over these camps in a few short weeks.

Because that's something we can do well. It's more consistent with our Canadian values. Or at least the ones we used to have, back when we believed that you didn't have to bomb your way to greatness.

And it would have given us a far bigger and more valuable role in the Great War Against ISIS.

Than our tiny role in the American coalition bombing campaign... 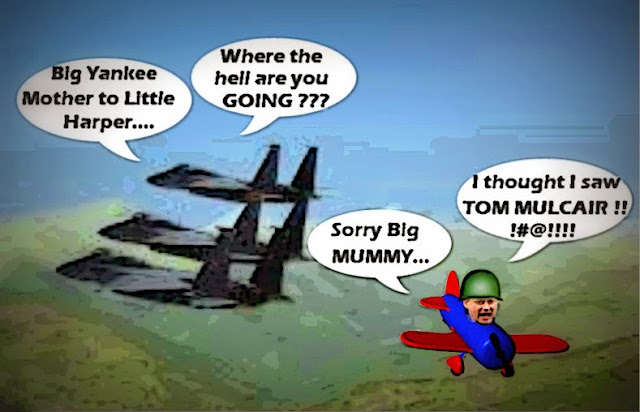 But reason never stood a chance.

The rush to Harper's War could not be stopped.

War fever was sweeping the land. The blood moon was in the sky.

You know, I hate to compare war to a farce, since I realize it's no joke for the pilots who must execute Harper's orders. And for whose safe return I will be praying.

But I know of no other way to describe this one.

It's Harper's War, intended only to improve his chances of winning the next election.

And I will mock him with both barrels.

Until the glorious day he is defeated...

Justin Trudeau and the Liberals are trying to play to both sides and flip flopping all over. The Liberals have changed thier position on this issue no less then 5 times, I mean its ridulucus. Support it or not, but you can't do both, it makes them look like tools out of thier depth.

Look at Harper's hand in the 'Canada must be strong' propaganda.

He's using a Muslim hand sign that means "There is only one God."

Another great post Simon. I believe you are spot-on with the 'patriotism and fear' battle cry and justification argument. It's quite unnerving how many people are willing to follow this blindly.

There is also an argument to be made that for Harper, this war is as much (or more) about his religious righteousness than a humanitarian righteousness.

I wonder which western countries will be putting boots on the ground?

Deja Vu (All Over Again)
http://www.azlyrics.com/lyrics/johnfogerty/dejavualloveragain.html

hi Gyor...it's true that Justin Trudeau hasn't been as clear as Tom Mulcair but then Tom doesn't have to deal with all the war horses like Lloyd Axworthy who have been running around fanning the flames, and playing into Harper's hands. Also, the fact is the debate was a farce, this little warlet is a farce, so it doesn't really matter what the opposition parties say. At a time when war fever is running high IO suggest that less is better...

hi Morlock....well that's true it is a sign Muslims use, but in Harper's case it's The Finger of Death, before which all terrorists AND all Canadians must cower. But will eventually end up you know where... :)

hi TheBlueGrit...thanks a lot I'm glad you liked the post. I'm a bit of a patriot myself, but only in defence of our true Canadian values, and when I see how the Cons are using it and naked fear to get people to back this half assed mission it really annoys me. And yes, I too wonder about Harper's other motives. Terms like the caliphate are like a dog whistle for his rabid religious base, and the way he is trying to extract every possible political advantage out of this crisis is absolutely shameful...

hi David...I think it will be, in descending order of desperation, first Tony Abbot, and then David Cameron.With Harper waiting to see if a Canadian gets beheaded, before making his move. And yes deja vu indeed...