Stephen Harper and the Great War on the Internet 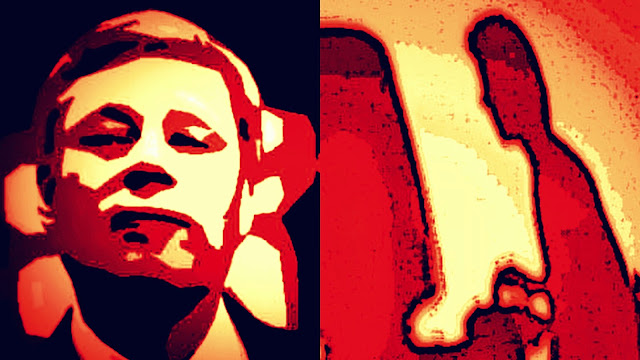 Well he may have had some anxious moments, cowering in a broom closet, while his faithful cult members prepared to defend him with home made spears.

And a mentally ill gunman was being gunned down by the heroic Kevin Vickers, and...um... others.

And it certainly wasn't his finest hour.

But I see not so Great Warrior Leader did manage to salvage some advantage out of the situation by declaring war on the internet.

Whose passage, due to the prevailing national emergency, was not recorded by any in the MSM.

Even though it's an Orwellian cyber-snooping bill that will allow internet service providers to hand over any information about anyone to the police, without ever running the risk of being sued.

And by announcing his intention to further suppress internet freedom. 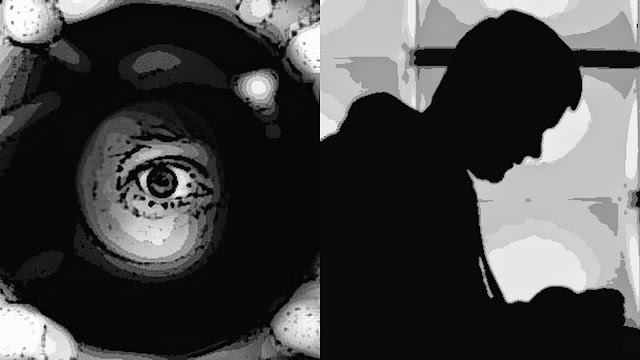 In the wake of this week's attacks in Saint-Jean-sur-Richelieu, Que., and Ottawa, the Conservative government is looking at bringing in new laws to crack down on pro-ISIS sentiments like those posted to Quebec assailant Martin Couture-Rouleau's Facebook page, CBC News has learned.

Because while he may claim those new laws are aimed at the ISIS wannabes in our midst, and at hate speech, they could also be used against the rest of us, as the Con rebel Brent Rathgeber points out:

"If one is opposed to the Israeli actions in Gaza, does that make her an anti-Semite? If one is against Operation Impact, is that a 'pro-ISIS sentiment'?" he wondered, referring to the U.S.-led military mission targeting ISIS in Syria and Iraq.

Especially since the Con regime's definition of who is a terrorist is as we know highly subjective.

In the wake of this week's shooting at the National War Memorial and on Parliament Hill, the "Conservatives are understood to be considering new legislation that would make it an offence to condone terrorist acts online," the National Post's John Ivison wrote Friday.

But the intent appears to be similar to an amendment to the Anti-Terrorism Act proposed in 2011 that was aimed at outlawing the glorification of terrorism, modeled after a similar law in the United Kingdom.

And can include just about ANYBODY... 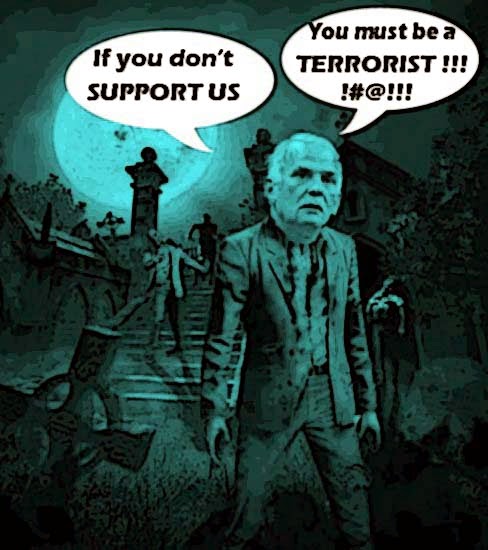 In 2012, Public Safety Minister Vic Toews at the time, listed "eco-terrorists" as threats in a new anti-terrorism strategy. "The minister said that, in addition to foreign threats, the government would be vigilant against domestic extremism that is 'based on grievances – real or perceived – revolving around the promotion of various causes such as animal rights, white supremacy, environmentalism and anti-capitalism,'" the Globe and Mail reported at the time.

Especially those who oppose Harper's planet burning policies, or dare to criticize our corrupted economic system.

And if you want to know how all of this is working out in the United Kingdom, all you have to do is read this.

A man who posted a Facebook message following the deaths of six British soldiers which said: "All soldiers should die and go to hell" has been sentenced to a community order and told to pay costs of £300 by magistrates.

And then imagine what a similar law here could do to the internet as we know it.

But then this is Canada, and Stephen Harper knows he can get away with just about anything, by invoking the terrorist menace.

And whipping up the growing cult of militarism... 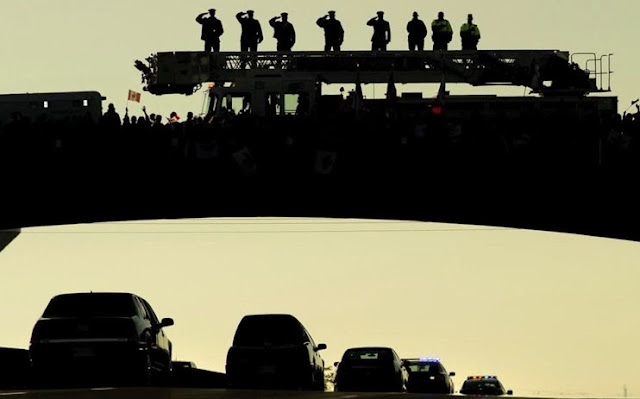 Just like Pierre Trudeau got away with arresting more than 400 innocent people during the October Crisis by invoking the separatist menace... 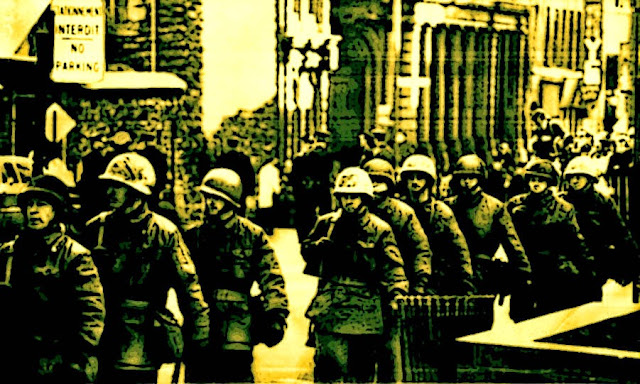 While most Canadians cheered wildly.

Just like so many are cheering on Harper now.

"He gazed up at the enormous face. Forty years it had taken him to learn what kind of smile was hidden beneath the dark moustache. O cruel, needless misunderstanding! O stubborn, self-willed exile from the loving breast! Two gin-scented tears trickled down the sides of his nose. But it was all right, everything was all right, the struggle was finished. He had won the victory over himself. He loved Big Brother."

Oh yeah, I remember. With a total surrender to fear. 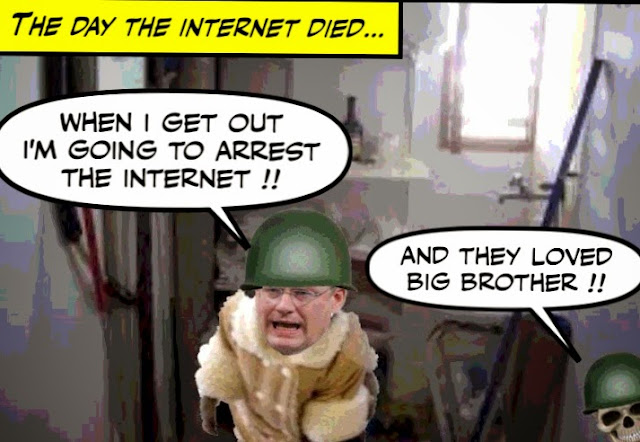 First and foremost, I do NOT believe everything I read on the Internet or otherwise. I consider it to be a source of information same as a newspaper or TV etc. If I find something which strikes me as offensive, I press my delete button. I do not "jump" on it and start maligning the source.

Simon, you are talking about "THE GREAT WAR ON THE INTERNET" and I ask myself why there isn't a war on TV news shows, newspapers(papers which print the news), magazine articles etc. ?

I have freewill and hopefully can separate the "corn from the chaff". I am quite capable of voicing my opinion and I will not be a happy camper if I lose my rights and freedoms ...........We need to bring back our Canadian Democracy at the polls........one vote at a time!

Typical Harper exploiting this tragedy for political gain. And what is that political gain? Harper does not have this legislation created out of principle or even out of need. The purpose of this anti-terrorist legislation and practically all of his previous legislation is to expand his powers. Legislation is just another tool in his arsenal of tools used to pursue power. Canadians are witnessing how a dictator in progress acquires power. Power of course is about control. In Harpers case it is about the control of Canada. This is being done before our very eyes. How easy are we making it for Harper to succeed?

Well, the opposition can also see what is going on in front of their eyes too. Jason Kenny and Harper hauling thousands and thousands of foreigners, to take our Canadian resource jobs. They just added Bulgaria and Romania to their list of cheap foreign labor. Harper selling Canada to Communist China? Why isn't Harper tried as a traitor doing acts of treason, for selling Canada to that vile country?

However, the opposition is selling us out as well. The same thing is going on in Britain. Their people say, foreigners are brought in to take their jobs too.

How did Hitler gain control? He lied, deceived, thieved, was corrupt, dirty politics, dirty tactics, propaganda and he cheated to win. Sound familiar? It should.

The jails could be getting a tad crowded when harper and his herd put all of this into practice. What if those dangerous bird watchers in Ontario don't stop writing letters to cabinet ministers? Will they too be audited and then sent to jail some day?

O.K. we are going to need a lot of jails because a lot of people simply aren't going to understand the laws or what has happened to our democracy. /What harper is doing is bringing Canadian law into line with Chinese law. Do remember, that agreement came into effect 1 Oct. harper is just so putin.

Well you cannot believe much from the controlled mockingbird news . Those who know their way around the net know who is credible and who is not .

hi Kathleen....of course you shouldn't believe everything you read on the internet. But the reason Harper and his gang want to strangle it is because it is the people's media, and the only thing they can't control. Social media is going to play a huge role in the next election campaign, so he would very much like to at the very least intimidate us before that campaign begins. Needless to say, the internet is strong, and we won't be intimidated...

hi Pamela...you're right, police have all the laws and the power they need to protect us from any would be terrorists in our midst. They may have to be tweaked in one or two places, but that's all. And the only reason Harper is pushing for more police powers is because he is a pathological control freak, and no amount of power will satisfy him. He never did know where to draw the line, and now he's out of control....

hi e.a.f...you know when I think of what this country has become I sometimes still find it hard to believe that it's actually happening. I feel like I've been numbed by the weight of all those Con crimes against democracy and decency. Sometimes they make me feel so exhausted I can't imagine how I'm going to make all the way to the next election. But most of the time they simply enrage me, and make me even more determined to defeat them...