Will Stephen Harper Go For a Late Fall Election? 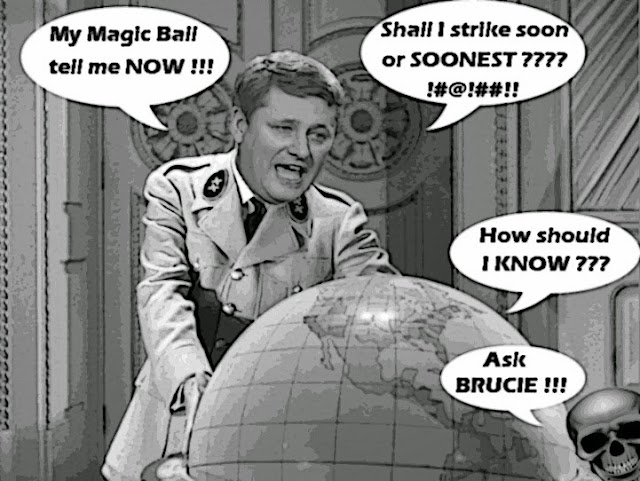 It's been the subject of much fevered speculation. Will Stephen Harper call an early election? And if so how early?

And no doubt Great Desperate Leader is consulting his crystal ball, and the fevered voices in his head.

And in his brief moments of lucidity, probably wondering if he DID go early what would be his excuse?

But now some Cons are apparently saying that he already has two good excuses, and he should pull the plug immediately.

If Prime Minister Stephen Harper chose to pull the plug early for the next election, he would have no difficulty in making the case for one as the opposition parties have already voted against the Conservatives on Canada’s combat mission in Iraq and the need for a fresh mandate on how to spend billions of dollars in the expected surplus in the next federal budget, say Conservatives.

Even if it's only his old buddy Bruce Carson come back to haunt AND tempt him like the Ghost of Christmas past... 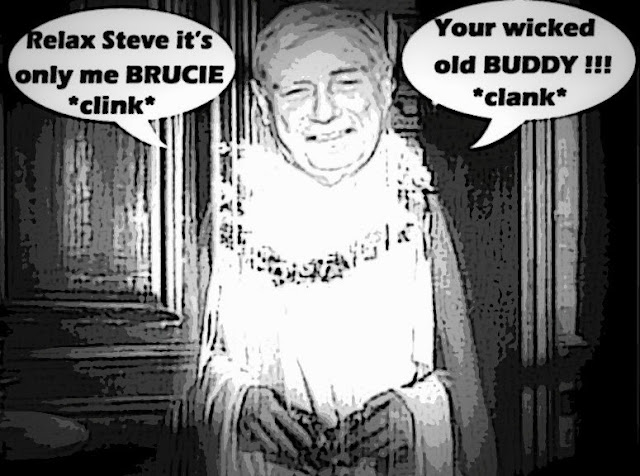 Because as Ol' Brucie reminds us he has done it before...

Although the 2008 election was called in September, Mr. Harper had made up his mind in early summer that he wanted to go to the polls in the fall because of the country’s poor economic outlook at that point and the prospect that then-opposition leader Stéphane Dion (Saint-Laurent-Cartierville, Que.) would grill him day after day on the economy.

This WOULD be a bummer... 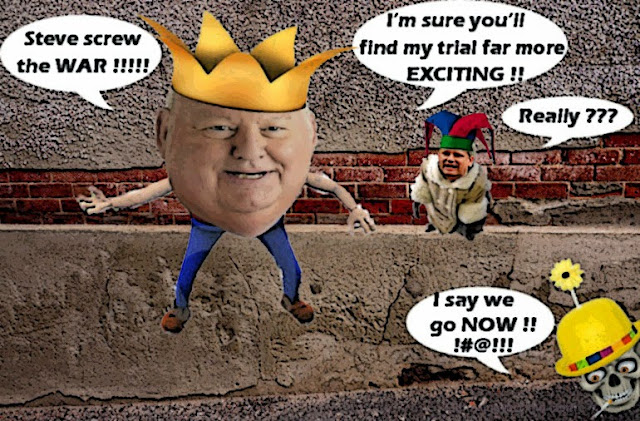 And as Harper's former Chief of Staff Keith Beardsley says, who cares about the Election Law?

Great Principled Leader should just grab the $7 billion surplus, wrap himself in the flag, and pull the plug whenever he wants.

“Your opponents get stronger every day. There’s a point where you either try and take down your opponent before they become too strong. [Otherwise] You basically set yourself up for failure. I don’t think they’re [Conservatives] going to do that. They’ll move when they feel the time is right,” Mr. Beardsley said.

And all I can say is how low have we fallen, when laws are made to be broken, by those who made them? And if it isn't dementia, it must be DELUSION.

For the Harperite cult doesn't seem to have noticed that the Con ship, or the Con Ark, has just hit an iceberg. 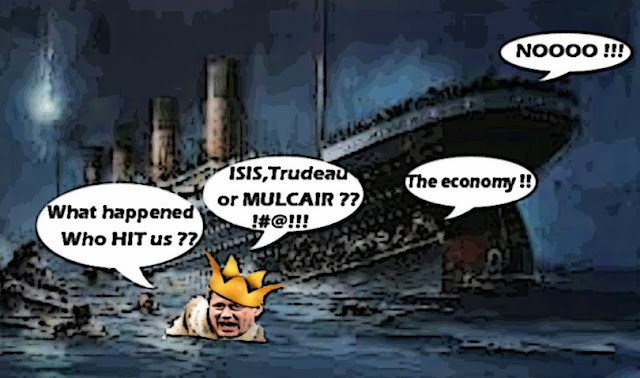 Canadian stocks hit a record high six weeks ago, but have been on a downhill run ever since as nervous investors act on growing worries about deteriorating global conditions and their debilitating effect on demand for Canada’s energy and other resources.

It's going to be really hard to explain why they are handing out tax breaks to some Canadians, at a time when the deficit will be taking on water, and the rest of us will be getting poorer.

This is a troubling milestone, because if stocks continue their slide, it will put a severe dent in the value of individual investments as well as the mutual and pension funds that Canadians count on for retirement.

As we sink into the depths of a new recession.

The list of global stresses is long, including a slowdown in China , a dramatic weakening of the once strong German economy, deepening woes elsewhere in Europe, increased strife in the Middle East, and the spreading Ebola scare.

Or for that matter really hard for Stephen Harper to explain why he insists on claiming he's a Great Economist Leader, when he put all our eggs in one oily basket. 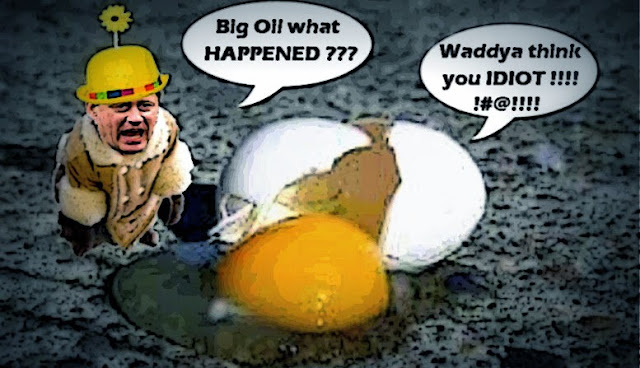 And of course his reputation as a Great Warrior Leader will also suffer serious damage, as support for the war fades as it always does, and Canadians discover the true cost of that quagmire.

Even as the Harper Conservatives have deployed CF-18 fighter jets to Eastern Europe, and now to Kuwait to join the air war against Islamic State, the Canadian Forces have seen their funding slashed. But that may be about to change, as the government considers adding back part or all of the $3.1-billion removed from the military’s piggy bank in last February’s budget.

All of which leads me to TWO conclusions:

One, he probably is crazy desperate enough to go for a late fall election. Before the economy completely collapses, and before enthusiasm for the war wears off.

Where there's smoke there's fire, so we should be ready.

And two, even if he does it won't make any difference.

Anything less than a golden economy will fatally wound him.

He will sooner rather than later wear the war as a shroud.

He may desperately try to change his image again.

But nothing will save him, and he is going down.... 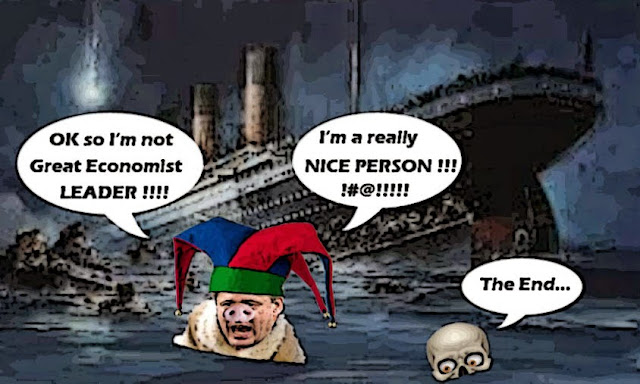 You can beat us you can whip us but you can not make us come to any conclusion that a early election is justified. Harper himself has salted the battlefield on this point. I hope the cons are back to two seats, if there is an early election it will speed this process.

"Whether it’s going to stick or not,"

Whether what is going to stick?

Harper blatantly lied regarding, playing a bigger role in the ISIS war. The US said, they did no such thing. Everything that could be bombed, already was. What is Harper going to bomb, rubble into pebbles? Harper was an abject failure in Wales. Harper is a pariah and no-one wants him. Harper's fail in Wales? He is in a panic to redeem himself on the global scene. Harper forced his way into this war. Obama thanked all of the other countries for their support. Harper didn't even get, a honorable mention.

Harper and Jason Kenny added Bulgaria and Romania to their list of, cheap foreign labor. A shortage of labor in Canada, my @$$. An Engineer applied for several resource jobs. He was told, there were over 4,000 for just that one job.

Harper has been buying thousands and thousands of ethnic votes. Harper sold Canada to Communist China and there will be more Chinese in Canada than Canadians. There is also, the Jewish votes, Ukrainians, Philippine people, Bulgarians, Romanians, Irish, East Indians and Poland was given the ship building contract. Those are only some of the foreigners being given our jobs.

How much money did Communist China pay Harper to buy Canada? Harper is a traitor doing acts of treason against our country and the people. He belongs in prison and the opposition is doing what?

Canada’s Housing Bubble – can’t wait for our fraudulent Prime Minister Stephen Harper and his Economouse (the four-foot F**K all) Jim Flaherty and Mark Carney to rightfully take the blame for it. Why the heck did they secretly introduce sub-prime mortgages into Canada?

It's all HERE, all the truth re Canada’s financial status (mostly Real Estate news) – yes, all the TRUTH you can stand… you’ll RARELY read any of this in the corporate owned MSM for obvious reasons (i.e. real estate companies buy loads of ads from newspapers in exchange for favourable happy spinned articles).

No matter what the polls say now (Libs far out in front of the Cons--decided voters) Harper will not be defeated in the next election unless a greater percentage of Canadians get off their butts and vote--particularly youth.

Harper loves low voter turnout. Certainly his base comes out to vote, and other votes are split between mostly the NDP and Libs, and the Con candidate comes up the middle.

If he calls the election now he will have out "maneuvered" Duffy. that is the one thing he doesn't want hanging over his head, Duffy's trial. By calling an election now, he can say either, it going before the courts or nothing has been proven. Duffy wasn't smart enough to get a book out for Christmas and so its a perfect time for harper and his herd to go back to the electorate. He might even win again.

If he call an election we can only hope the Veterans make good on their threat they will work against him. All they have to do is show up every where the Cons are. The other group which needs to "dog" him during an election are the families of the 1,200 murdered and missing First Nations women. those two groups could do him in.

hi Steve...I personally would welcome an early election. As I said in my post I don't think it would help Harper. But as I also said, the progressive parties better be ready, because it will be a brutal contest, and failure is not an option...

hi Hugh...well as you know Ol' Brucie, has his own troubles with the law. So no doubt he's hoping no charges will stick to him, and knowing Harper like he does I'm sure he thinks he's guilty. But didn't you love the word "mucilage"? It's another word for slime, and it couldn't be more appropriate....

hi anon...well our jets haven't started their bombing runs, and already other crews are running out of targets, and in the case of the Australians had to suspend a bombing run the other day because the ISIS gang was in a populated area, and they were afraid they could kill civilians. Which of course was predictable. If they could form a capable fighting force on the ground to fight ISIS where it must be fought I might even think of joining it. But this bombing campaign is just a show and a farce...

hi anon...yes I haven't mentioned the housing bubble, because it deserves a post of its own. After it bursts I'm sure a lot of Canadians will wonder what happened? But I will wonder why they didn't see it coming, and were they blind or what?

hi David...I couldn't agree with you more. There is nothing more important than getting out the vote in a country as complacent as ours. And getting the youth vote out is my most important priority. But the parties are going to have to do their share. I would suggest that at least 25 per cent of their ads should be dedicated to getting out the vote, and reminding Canadians what could happen if they don't....

hi e.a.f....having studied Harper for so many years, I know he must be at least considering a very early election. However, balanced against that is the fact that he definitely wants to remain in power until December, when he will become the sixth longest Prime Minister in Canadian history. So it must be a difficult choice and it must be driving him crazy....

hi Kathleen....OK you carry the flag and I'll beat my drum and off to we got to get them !!!! I've been waiting for years for that moment, and it can't come soon enough...