Stephen Harper and the Buying of the Next Election 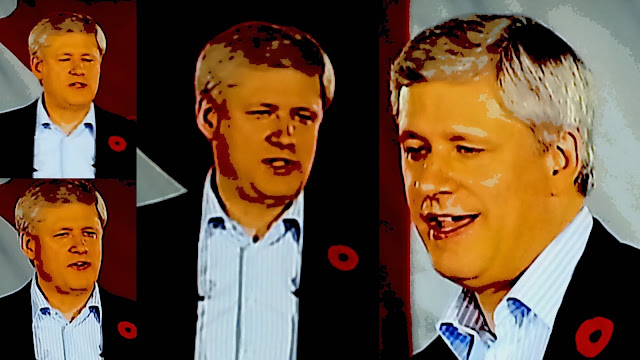 It looked like a remake of the 1950s TV show Dialling for Dollars. Or one of those Christian TV programs where the lame are made to walk.

But it was only Stephen Harper strutting around a stage in a Jewish school in Julian Fantino's riding.

Announcing plans to buy the next election.


And really all anyone needs to know is that income splitting won't help those who really need a tax break.

The Harper government’s parental income splitting plan is designed in such a way that guarantees it will only make a difference to the richest Canadians. By design, it cannot help those who need assistance with child care the most.

The federal government seems to expect single parents to live in poverty to raise children and to support them in that impoverished condition.

And that the increase in the so-called Universal Child Care Benefit will arrive in the form of a lump sum payment, just three months before the scheduled date of the next election.

And since the Cons will put all their new tax measures and benefits in the same bill, the opposition will not be able to oppose the taxation proposals without voting against those big juicy cheques.

Which may gave Stephen Harper the excuse he is looking for to call an early election.

Stephen Harper is about to get a bump in public approval. It comes with the turf for a leader after a period of national trauma, which then manifests itself in flag-waving, resolve and defiance.

Before the wave of patriotic feeling triggered by the murder of those two soldiers subsides.

Before Justin Trudeau and the Liberals are ready.

Harper would catch Liberal Leader Justin Trudeau flat-footed with an empty policy book. Liberal protestations to the contrary, Trudeau is not ready for a national campaign, particularly if he is being scrutinized as a potential prime minister while Conservatives are carpet bombing the airwaves with attack ads highlighting many of his ill-considered public musings.

And of course before the Duffy trial... 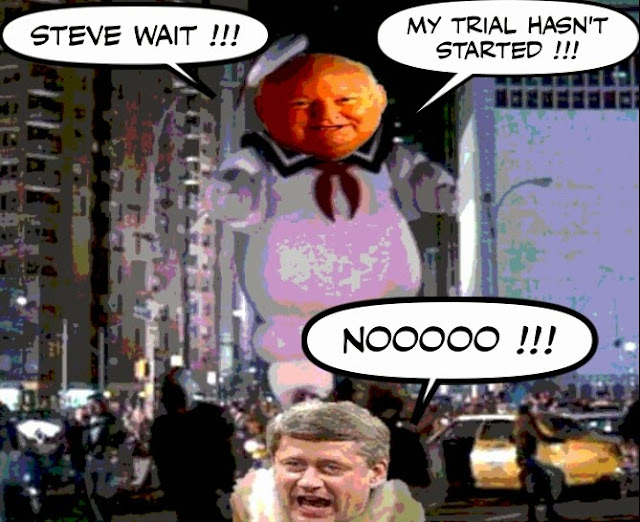 If he goes in the winter, Harper will be able to escape the drip, drip, drip of Mike Duffy’s trial set to begin in early April.

This prime minister is facing an uphill climb to re-election, but if he and his strategists believe this is as good as it gets, we will be campaigning with the sound of snow crunching beneath candidates’ boots.

But beyond all that there is another problem. And that is the fact that if they are to counter the Cons effectively, the opposition will have to make the case for taxes.

And that won't be easy in a country like this one... 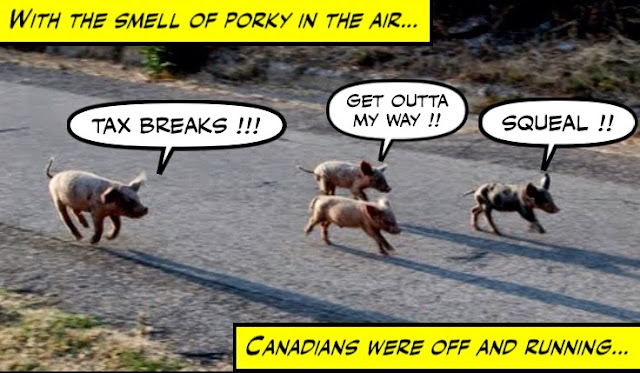 And the good news? That case can be made if the Liberals and the NDP can focus on the big picture. Properly explain where this tax cutting mania is leading us.

To the end of government as we know it, and a Canada we don't recognize.

If they can also portray the Cons as dangerously irresponsible for vaporizing the surplus even as the economy could be heading for rough waters.

There are worrying signs of a new recession in Europe, while falling oil prices and growing geopolitical strife in the Mideast, Eastern Europe, Africa and elsewhere are negative indicators for future growth.

The International Monetary Fund warned in its latest report advanced economies need structural reform to support long-term growth. It also said some countries may have to consider yet another stimulus plan. Canada is on track for modest economic growth, but that could easily change.

And of course, if they can portray the Cons as sleazy scumbags trying to buy an election... 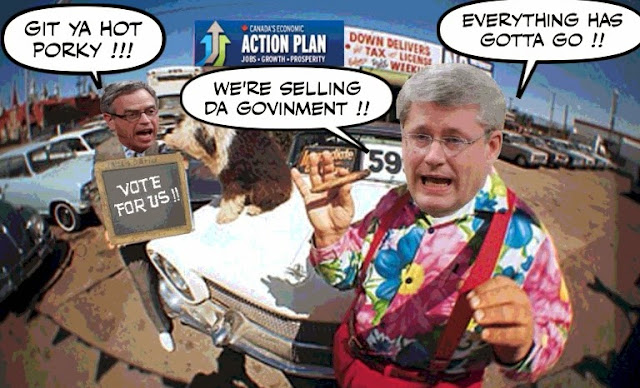 Because that is what they are trying to do and it couldn't be more shameful.

But then that's who they are, and we know what must must do.

Fight them harder than ever in the next two months.

Before their vote buying scheme pays any dividends.

And before their monstrous corruption destroys this country...

I trust in Canadians. This stain will be erased. No matter what the cost in the old pocketbook.

Wonderful. Harper cheated to win the last election, with all kinds of fraud, robo-calls for one. Sona and Del Mastro, hopefully on their way to prison. Harper has a list of degenerates as long as his arm, some of them off to prison as well. Then there was ex BC Liberal Premier Gordon Campbell and Harper's dirty little game. Nigel Wright was also sent to the UK, to keep Campbell company.

Harper and Jason Kenny are bringing over thousands of foreigners, to take Canadian jobs with their cheap labor.
They added Romania and Bulgaria, to their list of cheap foreign labor. So, we know there are still foreigners being brought over, to take Canadian resource jobs.

Harper has bought up, thousands of ethnic votes. The Chinese threatened to sue Harper if, they didn't get into BC. There will be more Chinese in Canada than Canadians. Harper said if, anyone tries to block China's takeover of Canada? The Canadian tax payers will have to pay for China's lawsuits.

Then Harper the ever fool, sticks his fat face into the war with ISIS. The US didn't need Harper and they said so. Harper is rabid to play the big shot on the International scene and all Harper looks is a fool. Harper forced his way into this war.

That is only a drop in the ocean, of Harper's treachery towards Canada and the people.

From Chapter X of "Animal Farm" by George Orwell...

Clover, whose eyes are failing in her old age, asks Benjamin to read the writing on the barn wall where the Seven Commandments were originally inscribed. Only the last commandment remains: “all animals are equal.” However, it now carries an addition: “but some animals are more equal than others.” In the days that follow, Napoleon openly begins smoking a pipe, and the other pigs subscribe to human magazines, listen to the radio, and begin to install a telephone, also wearing human clothes that they have salvaged from Mr. Jones’s wardrobe.

*
What Stephen Harper really meant to say in his Oct. 30 announcement: "All families are equal, but some families are more equal than others. That's why today I am pleased to announce income splitting for Canada's richest families."

income splitting, well my definition is we split some of the income off of profitable corporations, by way of income tax and then send the split over to kids who need day care.

Income splitting is only for those who have a fairly decent income. If you are two parents, one income, with kids but that one income is only $45K, then splitting it isn't going to do anything for your family. You have to make more to split income and get a cheque from the income tax dept. or the harper silver shower dept.

Income splitting is grossly unfair to single parent families. I do hope one of them files a human rights complaint. You see if one spouse is making i.e. $75K and they split the income, they get a silver shower from the cons. If its one parent, and they are making $75K they have kids, but they don't have anyone to split the income with, they still pay taxes at the higher rate, and they have a shit load of money to put out for day care, if you can find it.

Out here in B.C., quality day care is as rare as an ethical Cons senator. There are R.N.s, firefighters, cops who are single parents who do make $75K and teachers, but if they have no spouse, they don't get to split it with anyone and hence no rebate. it isn't fair, sometime spouses up and DIE, so there you are a dead spouse, a house full of kids and no tax break. thanks there harper. he must belong to the same club as Premier Christy Clark out here in B.C. with her line about families first. of couse then we had the line about, job, jobs, jobs, and then we're going to grow the economy. Sounds like she and harper must have the same play book.