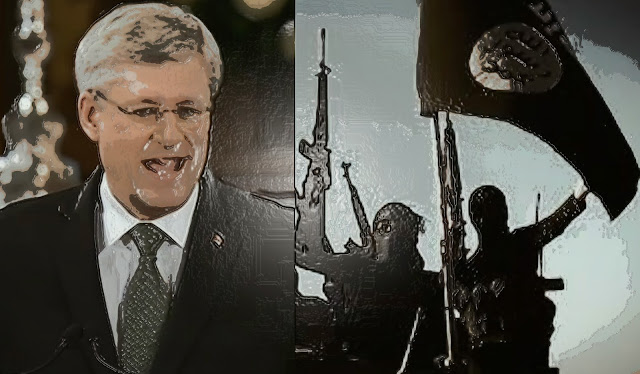 So great is Stephen Harper's contempt for Parliament, that even on the day when it debated his plan to take us to war, he didn't even bother to show up.

No doubt preferring to stay at home, and prepare himself psychologically so he can control himself, and his bowels, when the special moment arrives.

And after eleven years he FINALLY gets his War in Iraq.

So in his place in the Commons today we got John Baird, and this special moment.

“Just think for a moment what could happen if we do not act. When I sing ‘We stand on guard for thee,’ and maybe I do not sing it very well, but I mean it well enough. I mean it as a citizen, and I mean it as a member of Parliament who sees this as the highest responsibility we have to our constituents,” Mr. Baird explained.

“If we do not deal with ISIL and its ilk, they will deal with us. Anyone who accepts the premise that ISIL is a threat to our security while leaving the fight against ISIL to others is abrogating their role of responsibility and their duty of care.”

Just another stirring message from our inspiring Foreign Minister... 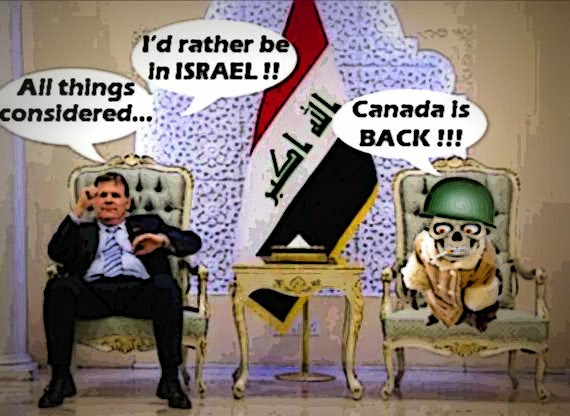 “Let us debate what needs to be done but let us be Parliament at its best,” the minister said. “Let us be Canada at its best.”

Can you believe that eh? From the Cons who have taken our Parliament and our country into the toilet.

But that's how low we've fallen.

This isn't even hideous Harperland anymore, this is Animal Farm... 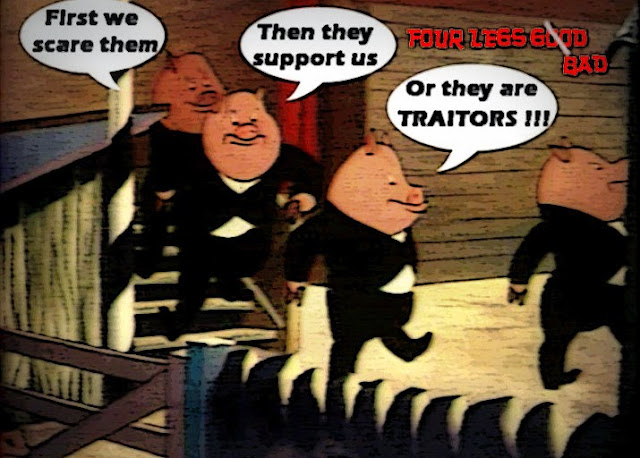 But of course, the reason the Cons are strutting around on their hind legs is because they know that right now most Canadians support a military campaign.

While MPs debate what kind of role Canada should play in the fight against ISIS, polls suggests a majority of Canadians are supportive of the country joining the United States and its coalition partners in a combat mission against the Islamic militants.

The polls also suggest a majority consider the fighters known as ISIS to be a direct or serious threat to Canada's interests.

And as I pointed out the other day, that's not hard to understand when you read the story of the gentle taxi driver Alan Henning.

Prior to travelling to Syria for the fourth time, he told BBC News he was not a Muslim himself, but that visiting a refugee camp had changed his life and he had felt compelled to return.

And you know what the sadistic ISIS murderers did to him... 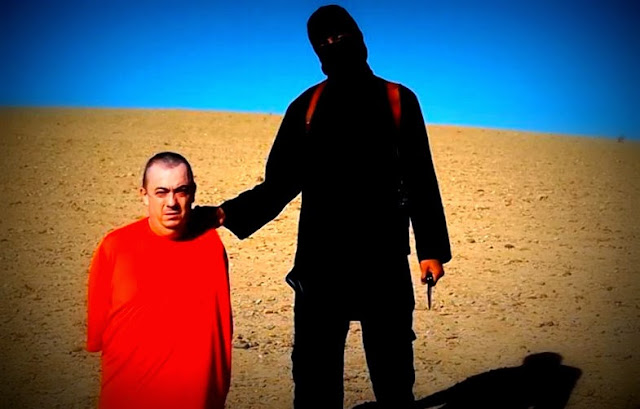 It makes the blood boil, it makes you want to kill them ALL. So bestial are those cowardly bullies.

But that is precisely why it's absolutely ESSENTIAL that the opposition hammer home these points:

The bombing may make people feel good, it's a natural reaction, but it will not stop ISIS. It might actually make the situation worse. And the more fearful, angry, or hysterical some Canadians become, the more they will play into the hands of those maniacs.

It gets to you, Isis – it’s running what must be one of the most sophisticated programmes of psychological warfare mounted by a terrorist group in history. Partly through a social media campaign that is more advanced than those run by many corporations, it is transforming us into its recruiting sergeants.

We grow more terrified of it; we express our terror, and so help to spread it. Western media compete over inflammatory language to express the evil of Isis, and add to its almost otherworldly, terrifying mystique – a mystique Isis has depended on to conquer large swaths of Iraq and Syria, because its opponents are left too frightened to resist.

And do exactly what THEY want us to do.

As General Jonathan Shaw – the former assistant chief of the defence staff – says: “What possible advantage is there to Isil [Isis] of bringing us into the campaign? Answer: to unite the Muslim world against the Christian world. We played into their hands. We’ve done what they wanted us to do.”

When we could have taken a taken a different and far more Canadian approach, and gone to the rescue of the army of desperate refugees ISIS has created.

And for which he was remembered yesterday by some of the Syrian children he tried to help... 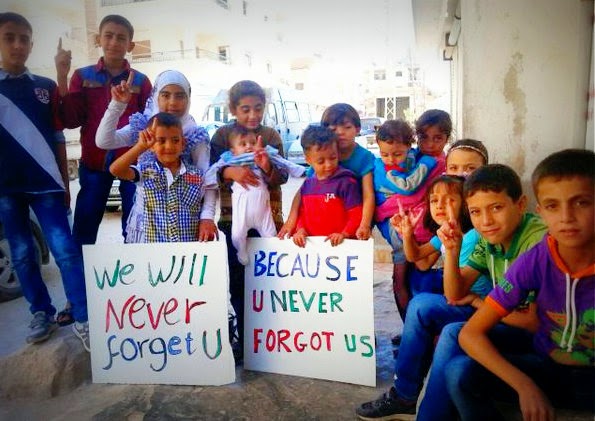 For they are so grateful for even the little he was able to bring them, they are so many, and they are the forgotten.

So imagine what we could have done to help them and all the others, if we weren't spending all our money on bombs.

But of course Stephen Harper isn't interested in them. He just wants to scare Canadians into voting for him.

And for that he needs ISIS even more than they need him.

For whatever he says or does, he's no Great Leader.

He is betraying the real interests of Canada.

This is nothing less than a sordid marriage of convenience... 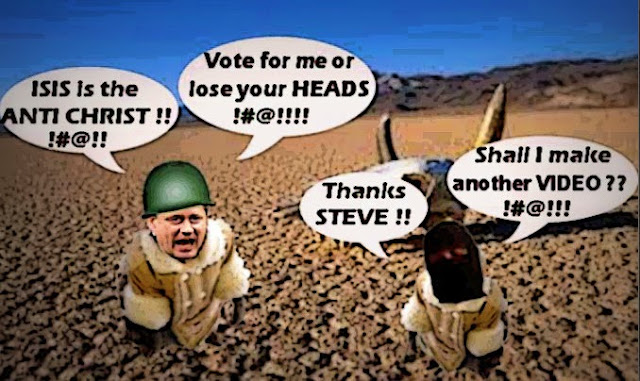 And the sooner we can hammer that message home.

The sooner the Cons will bite the bullet.

And the sooner his war will destroy him....

Herr Steve is the Antichrist and John Baird is his False Prophet.

Go read Revelations, it even talks about beheadings.

The war mongering propaganda of the Harperites is such a travesty. Any conscientious critical thinking Canadian surely must understand they are being CONned. It is also shameful that the chief antagonist cannot even show up in Parliament to support his manipulations. Yes indeed Harper is acting like many other historical military elite who never showed up anywhere near the battlefield to support their troops. They only send them out for slaughtering.

As if Harper gives a damn about any people in this world. Harper loves Harper and never does anything, that doesn't benefit him. Harper is nothing other than an evil dictator and has been, right from day one. What kind of an idiot, sells their country to Communist China.

Then the monster says, he will keep his objective on climate change. The only true words Harper has ever uttered? I AM the law. I MAKE the rules. And, by the time I get Though with this country, you won't recognize it. That's for damned sure. Canada has never been occupied, by a Communist country before.

Harper is by far the worst terrorist, Canadians have ever been subjected to.

May hit the nail on the head. ISIL formerly ISIS will now be known as Tangled Up and Blue.

Here is something to add to the perspective on ISIS. Back in 2007, General Wesley Clark, former Supreme Commander of NATO, spoke of them. http://www.youtube.com/watch?v=bSL3JqorkdU

Why would Canada have any thing to do with the war on ISIS/ISI? We are a long way away. Turkey, who sits next door, is simply sitting the whole thing out. ISIS was about to take a town, right on Turkey's border and Turkey wasn't doing anything. NOTHING. So if Turkey isn't that concerned about ISIS, why the hell are we, some several thousand miles and an ocean away.

of course Turkey maybe staying out of it because ISIS is a pain in the butt to Assayd/Syria and the Pres. of Turkey doesn't like the president of Syria and the more Kurds who are killed fighting ISIS, the fewer to bother Turkey. Canada needs to stay out of this mess. it is one of those middle eastern things which has been going on for a very long time and will continue to do so.

Harper and his herd have enough money to play "lets go to war in the middle east" but Canadians have to work to age 67 now to get their pensions. Remember that when you go to vote next time. You are working 2 extra years so harper and his herd can play warrior, oh and get your kid killed if they are in the military.

I'm not worried about ISIS/IL. I am getting a tad concerned about that "flu" kids are getting here in North American which is leaving some of them with partial paralysis and Ebola in Africa is truly terrible. ISIS, who cares. A bunch of little boys with big trucks. Then there is harper and his herd with little .....

hi Morlock....yes there is something Biblical about Harper's approach to this war. I can definitely see Harper as the Antichrist, but John Baird as his False Prophet is almost too much to endure... ;)

hi anon...yes Stephen Harper has always been a hopeless chicken hawk, always ordering others to go out and fight, while he stays safely at home. Our shameless warmonger, our little Napoleon...

hi anon....yes Harper is trying to terrorize us into going along with his half baked plan. But as I always say these days he is desperate, he will try anything, and nothing will save him from being defeated in the next election...

hi Steve....it's distressing to see that of the thousands of ISIS fighters who have signed up since the bombing began most are between 15 and 20 years old. Which suggests to me what I've told you before, this is the first war to be born in a video game...

hi anon...thanks for that link. It is pretty disturbing stuff to hear a general like Wesley Clark describe a plan to take out seven countries in five years. It always was a bigger plan than most sane people could ever imagine. And I can never forget how so many cheered as the Bush Cheney gang began their shock and awe assault. And then we wonder from what hell did ISIS spring from?

hi e.a.f....once upon a time, when we had real Canadian governments we never would have got involved in a war like this one. But unfortunately we have the most American government we have ever had, and far too many Canadians now think like them. As you know, my idea of Canada is a peacemaking nation, that fights when it has to fight, it at all possible tries to use brains and and our genius for compromise to try to make things better not worse. I don't know if that Canada will ever be back, but I will fight for it as long as I live...