Stephen Harper and the Catastrophic Collapse of the Con Regime 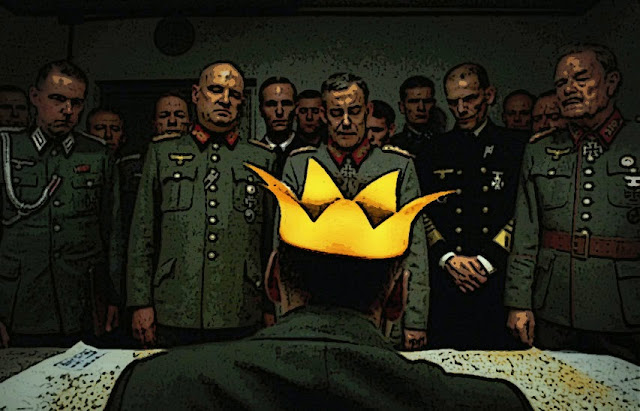 We'll have to wait until tomorrow to hear how Stephen plans to take us to war.

And how many planes and soldiers he will send to join the heroic twenty-six he sent to stop the ISIS hordes.

Canada has only 26 soldiers in Iraq serving as military advisers, rather than the 69 troops the government had said it was sending, Prime Minister Stephen Harper told the House of Commons on Wednesday.

And save us from being beheaded in our bedrooms.

In what judging from the latest polls, is looking more and more like a last desperate attempt to save himself.

In a major new survey of public attitudes and values, we find a pretty stable political landscape which is increasingly unreceptive to another Stephen Harper government. Not only would the government be in no position to aspire to repeat its 2011 success, it may not even achieve leader of the opposition with these numbers.

Indeed, Stephen Harper’s regal air coach may be about to turn into a pumpkin. 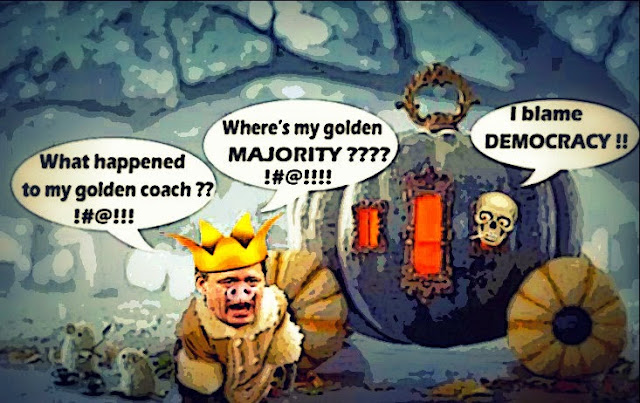 Because it turns out all those gazillion of dollars of photo-ops and propaganda haven't stopped him from hitting rock bottom.

The Conservative decline is no ephemeral blip caused by some controversy or wobble. It is a steady and grim decline along a straight line of descent. If this were an ECG, the prognosis would be pretty bleak.

And to make matters worse, contrary to what he told the Wall Street Journal last week, Canada isn't moving to the right.

Mr. Harper was asked by Mr. Baker whether he has made Canada a more conservative country. Mr. Harper pointed to policies on crime and economics as signs that he had.

"I think that we’ve moved and I think the country has moved with us."

It's moving in the opposite direction.

On a range of issues – law enforcement, legalization of marijuana, foreign policy, and the appropriate role and size of government – a majority of Canadians are offside with the government, the survey suggests.

And leaving him and his Reform Cons behind in the dust of history.

Because let's be clear, that's what that means. He's the leader of an old and tired party.

And most Canadians are now so sick of him and his right-wing policies.... 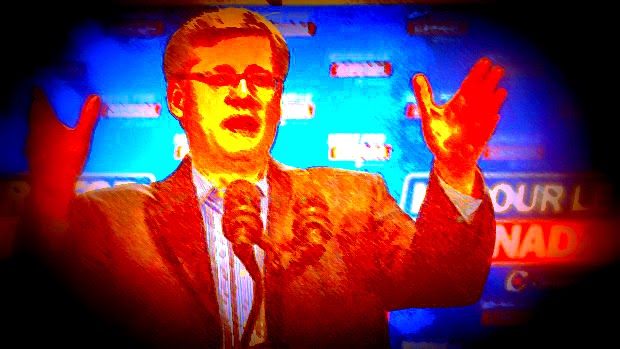 “Values are pretty glacial things,” said Graves. “They don’t typically shift that much but they seem to be moving as a response to, I think, being governed from the right.”

“They were OK with it for a while,” he said of Canadians, “but it seems now they are going, ‘No, that’s enough.’ ”

They're moving to the left to try and put as much distance as they can between them and the Harper gang.

And if that trend continues, as it should, the Con regime won't just be defeated in the next election it will be CRUSHED.

Oh sure, he will desperately try to save himself, by taking us to war in Iraq.

To try to make himself look like Great Strong Leader... 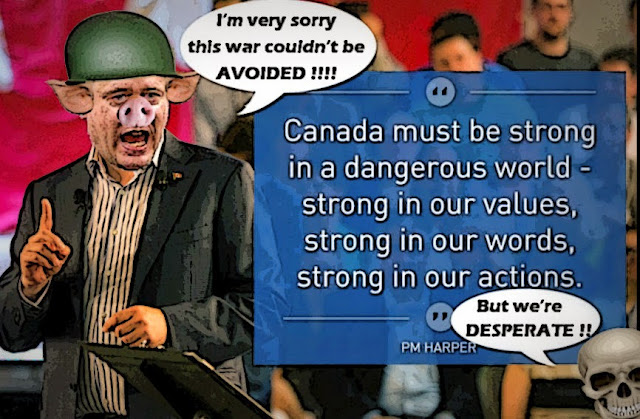 Without ever understanding, that people don't like Great Strong Leaders whose values they reject. They fear them and loathe them. And want them to GO.

But can you believe it? Stephen Harper, the right-wing monster who set out to change Canada beyond recognition. Only to cause a progressive RENAISSANCE, because so many people hated him.

It must be killing him. No wonder he's looking so desperate.

He can drop all the bombs he wants.

But his time is almost over.

And he's going down with them... 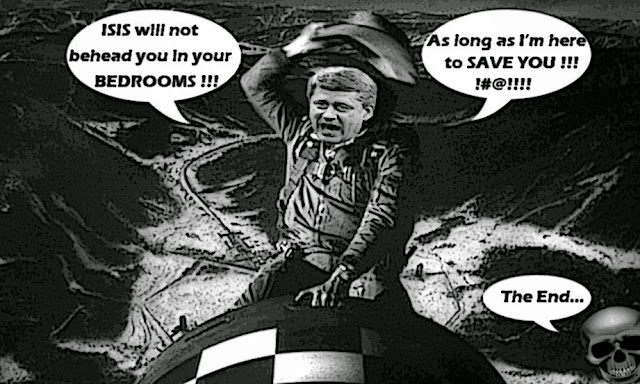 .. ergh.. 'progressive values' .. I cringe at times, when reading such terminology, Simon..

It often gets thrown in the word/term blender with 'Tories' 'Grits' Policy, Values, Election Promises.
'liberal' now means what? 'conservative now means what? Reform Madness & Bitumen Uber Alles ?
Can anyone explain what the BC Government is/was.. may be?

Certainly nobody can explain what the Harper Government is.. or who it represents/speaks for
.. No wonder the people are bewildered by Paul Calandra - Conservative crybaby
or Peter Kent - former Minister of Environment - poisoning boreal wolves to save caribou
or Stephen Harper - Prime Minister of Standing for Israel bombing Gaza
and who elected Ray Novak ? Or Nigel Wright - now managing Canada Pension Plan investment ?
And where did Arthur Hamilton, Jenni Byrne, Stephen Lecce get disappeared to ?
For sure we don't hear from Meier, Morgan or other Robo Wanks n Cranks

Hmm .. Harper will plant his Royal Colonial flag on Erebus.. the Franklin flagship
& proclaim his queenly ascendancy.. & how apropos .. (its submerged dude)
Cannibalism, failure, lost in the Canadian wilderness
unable to connect to The People.. Inuit.. the People of the Deer ..
locked and then buried by ice.. driven under
'Just over there.. by the rocky point' sez generations of Inuit, in 20 feet of water
but a flotilla of royal, loyal, Harper sponsors, ships and sideways radar 'discovered' Oh calloo calley !

Harper is gone Baby gone .. old, tired.. creepy, untrustworthy.. weak, shrill.. whiny
and everyone aligned with him reflects the same toxic & undeniable reality
Good gawd.. should this ludicrous pantomime be allowed to extend ?
Worse than living with fleas ..
its pretending to be living .. ... with rabies ..

Cringe if you want but I have progressive values. Everything else I agree with in spades.

hi salamander...look I get what you're saying in your usual eloquent way. But what I would say to you is that we've got to keep it simple. Only simple powerful political messages can make it through the clutter these days. Firstly because if it all sounds too difficult, like the constitution or the Middle East peace process, the people we need to get to vote, will be discouraged from doing that, and that only helps the Cons. And secondly, while it's true that none of the progressive parties are offering the kind of real solutions to the problems we face, they are both better than the Cons. And we can put pressure on them when they are in power to be better than they are now. But first we must defeat the Harperites, for the damage must be stopped, and nothing is possible until they are gone...

hi anon...as that latest EKOS poll suggests, by polarizing the vote in Canada, Harper has succeeded in creating a well defined majority of Canadians who define themselves as liberals or progressives. When once they wouldn't have done that, because they took our softer Canadian values for granted. In that way he has helped us by screwing himself. So much for that so-called political genius...

We bomb at dawn, and I am onside reluctantly. Outfoxed, outfought and really no one put up any defense.

bombing, they have got to be kidding. that is so yesterday and so expensive and so unnecessary. As to being killed by ISIS in my bed, who cares. They have to get past my dog. What does worry the hell out of me is Ebola. It comes in one jets with law bidding people, who don't even know they have it. it might be best if Canada focused its real energy on helping fight Ebola. Leave the war stuff to those in the middle east.