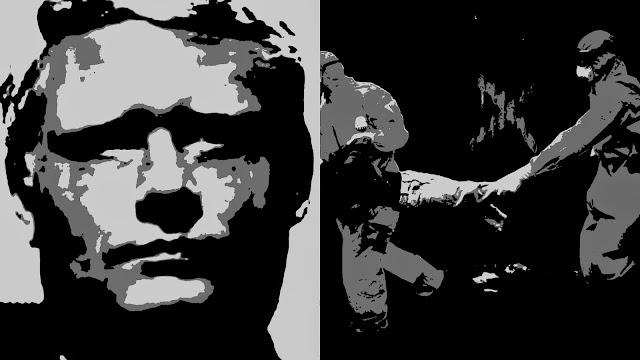 A few days ago I pointed out that Stephen Harper was trying to fan the flames of an Ebola panic.

Even though his response to the epidemic has been lethally inadequate.

And far from making us safer he has been decimating the ranks of those who would protect us from dangerous diseases.

But this is simply obscene.

Ottawa continued to auction off stockpiled medical supplies to the public, even after the World Health Organization requested the protective gear amid an Ebola outbreak raging in West Africa. Sales of so-called Personal Protective Equipment (PPE), which includes surgical masks and isolation gowns, also apparently took place despite requests that are said to have been made this summer via both Sierra Leone’s ambassador to the U.S. and a Canadian aid organization for donations to equip front-line health-care workers.

And some of the low-priced auctioned gear landed in the hands of entrepreneurs who then tried to hawk the items for a profit. 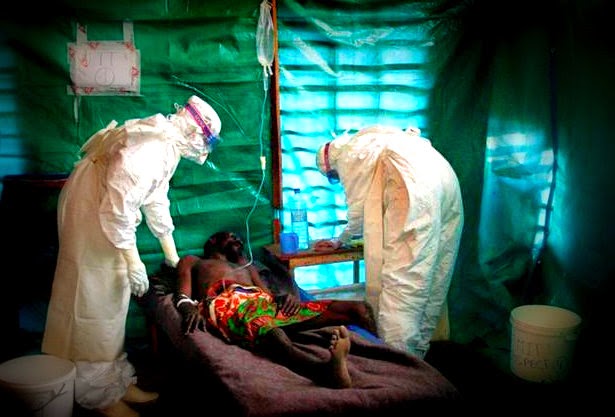 And what makes this scandal even worse, if that's possible, is that it also raises doubts about the true value of Canada's contribution to the global war on Ebola.

On Sept. 15, Health Minister Rona Ambrose announced Canada was donating “over $2.5-million” in protective gear to the WHO.

Whether those respirator masks, gloves, face shields and gowns are truly worth the price the government has quoted is questionable: According to an analysis of publicly listed data conducted by GlobalMedic, a Canadian charity that responds to international disasters, PHAC auctioned off an estimated $1.5-million worth of protective gear between February and August for a total of just over $30,000.

But then of course you know what I think about Rona Ambrose...

And she never disappoints.

The federal government won't send more experts to help contain the Ebola outbreak in West Africa without a guarantee they can be medically evacuated if they get sick, Canada’s health minister says. The United Nations is appealing for more money and medical staff on the ground in the affected countries of Guinea, Liberia and Sierra Leone, where the Ebola virus has killed more than 4,700 people.

They will send 600 soldiers to fight ISIS but they can't send any to help the desperate people of Africa.

And what did her deputy, the hapless Eve Adams have to say about this on Power and Politics today? 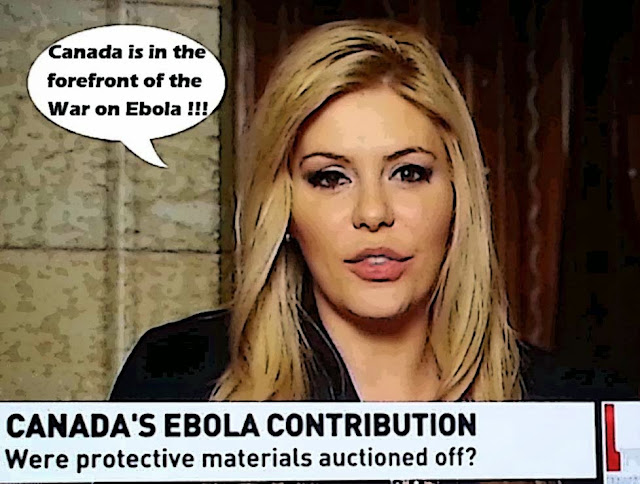 Yes, believe it or not, they are that SHAMELESS.

But then why are we surprised when our grotesque Cons are just following the Republican playbook again.

Which involves cranking up the fear factor.

The arrival of the virus in America has crystallised a range of Conservative anxieties: immigration, race, terrorism, science, big government, Barack Obama – you name it. For the right, Ebola is not just a disease, it is a metaphor for some of the things they don’t understand and many of the things they loathe.

While avoiding the implications of this public health emergency like the plague.

Ebola makes the case for government: an institution Conservatives have no love for. It is an issue of public health to which no individual or privatised response can make any substantial, meaningful contribution. To fight an epidemic like Ebola you need a well-resourced public sector, well-trained government employees, central planning and coordination and a respect for science.

And refusing to accept that on this tiny planet we are all in this together... 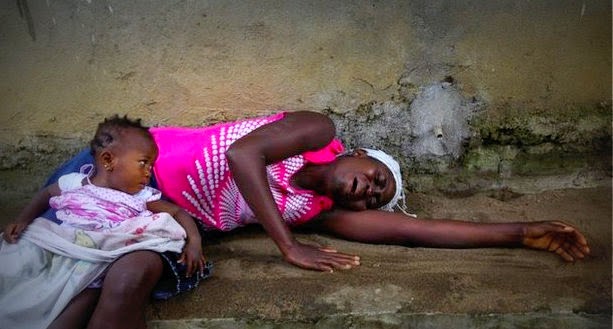 From the point of view of this leftist, what really terrifies the right about Ebola is that it shows – albeit in a deadly, scary, tragic way – that we are all connected. It shows that no matter how strong the gates around your community, how high the wall on your border, how sophisticated the alarm on your house; no matter how much you avoid state schools, public transport and public libraries; no matter how much you pay the premium to retreat from the public sphere – you cannot escape both your own humanity and the humanity of others, and the fact that our fates are tied.

If you want to feel secure in Texas, regardless of your race, income or religion, it’s in your interests that people have healthcare in Monrovia.

Which explains why our RepubliCons are doing almost nothing to fight Ebola in Africa. Even though if we don't help stamp it out at its source it will threaten us FOREVER.

And really what more can I say that I haven't said before?

A thousand times before.

Stephen Harper and his Cons are not just dangerous they're EVIL.

And we will not be safe or decent in this country.

Until the day this dangerous monster is defeated... 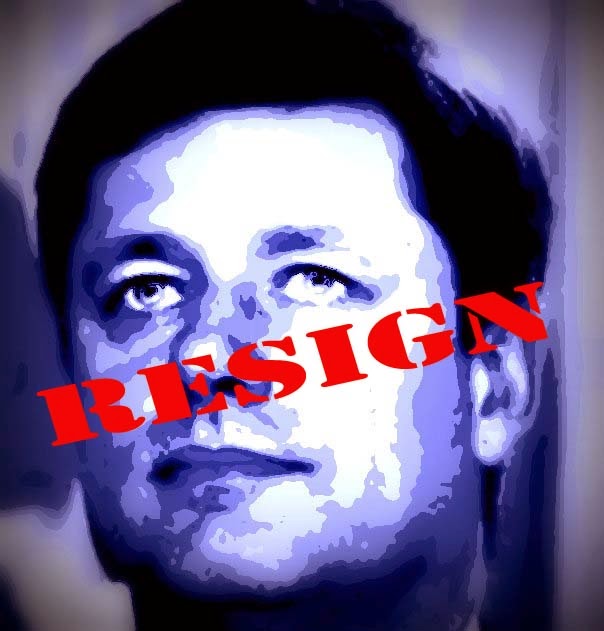 its like P.M. "lets go to war and kill them" harper saying we're on the forefront of the war on ISIS with 6 jets. Like who is he kidding.

its like P.M. "lets go to war and kill them" harper saying we're doing a lot for world hunger and people in Canada having to line up at food banks and soup kitchens, while his gut just keeps expanding.

but the NDP critic Libby Davies pointed out that only 10% of the funds have actually been spent!!! Another guest mentioned his Sierra Leone government has been asking Canada for help for several months, and Canada (and incompetent WHO officials) have been very slow to respond. He said if aid and supplies had arrived months ago, the Ebola virus would have been contained to only one region of the country, and much easier to get under control and eliminated. Host Peter Van Dusen asked him if he thought the response time would have been this slow if there had been an outbreak in Europe. He just said, "You know the answer to that question."

Maybe in a way the finding of Ebola in the U.S. has been a blessing in disguise, because it forced the U.S. and Canada to get off their butts and actually do more to help the West African countries that so desperately need help. But so far Canada looks like a chump--being late to the party.

"They asked Harper for humanitarian help..." ...without realizing he's not a humanitarian and his genetic makeup appears to be more reptilian.

"I can't even get my friends to like me" said Steve. Well who could like this man. He isn't likeable. He's a scumbag.

And while we're on the topic of medical research, why is Harper putting all of us at risk by cutting back clinical drug trials?
http://globalnews.ca/news/1513646/exclusive-doctors-scientists-warn-feds-quietly-planning-to-cut-funding-for-drug-trials/

Harper won't do anything usefull, but Cuba is sending a bunch of doctors to fight Ebola. Good global citizens those Cubans; Canada not so much.

hi e.a.f....I lost my respect for Ambrose a long time ago. I made that button many years ago. But her behaviour as Health Minister has discredited her even further in my eyes. Her decision to scrap a last ditch treatment for a small group of heroin addicts who resist conventional treatment was the last straw. A Health Minister who puts ideology before harm reduction, is a rotten Minister and a rotten human being...

hi David....yes having Eve Adams in the frontlines of the battle to keep us safe from dangerous diseases is the stuff of nightmares. And yes our record in this latest battle is simply appalling. Because of time constraints I wasn't able to point out that although the Cons are trying to use that experimental vaccine to make themselves look good, it was produced by scientists who they despise, not them. And the Cons have apparently botched the whole process by giving the rights to a small American company that has no production facilities, and in the opinion of many scientists is not suited to push the vaccine through. More criminally irresponsible than that is hard to imagine. Or as we say in Quebec, more con than that and you die...

hi anon...yes as I mentioned above the Con handling of that experimental vaccine has been totally incompetent. And in my mind betrays their complete lack of interest in what that virus is doing in Africa.
But since people are worried, and fear is their favourite weapon these days. You can be sure that the Cons will strut around on their hind legs, and try to make it appear that only they can protect us. When the truth is they are greatest threat this country faces, and we will not be safe until we are rid of them....

Had a really good laugh yesterday. A PostMedia paper, The Comox Valley Echo wrote an article about Ebola coming to the Comox Valley, Right, the Comox Valley, the east coast of Vancouver Island. Waxed not so eloquently about our local hospital St. Josephs and ebola. Wrote the editor and suggested if it really came to Comox Valley, we simply ought to find a priest and pray because we were not medically prepared.

Its flu season, that is a lot more worrying, not to mention the chances of being killed by a drunk or distracted driver. We had around 160 of those last yr. combined.

If harper and his herd want to do anything about protecting Canadians from ebola the first thing to do is stop it in Africa. I know that won't get him any votes and his "supporters" won't make any money, but hell, it might be the right thing to do.