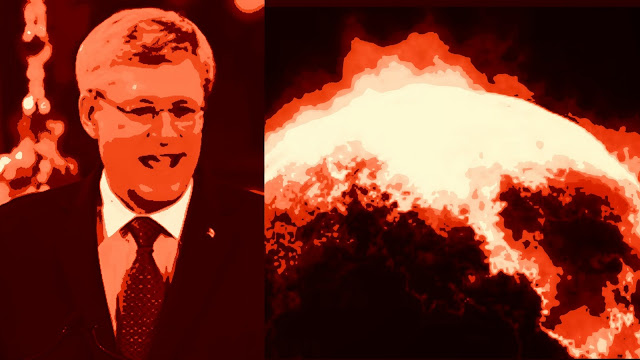 He would have us believe that terrorism is a greater threat than climate change. But with every day that passes the burning planet proves Stephen Harper wrong.

For imagine what might happen if a city of 20 million people runs out of water.

South America’s biggest and wealthiest city may run out of water by mid-November if it doesn’t rain soon. São Paulo, a Brazilian megacity of 20 million people, is suffering its worst drought in at least 80 years, with key reservoirs that supply the city dried up after an unusually dry year.

Because of the effects of deforestation and climate change.

Imagine the catastrophe in a megalopolis as big as São Paulo... 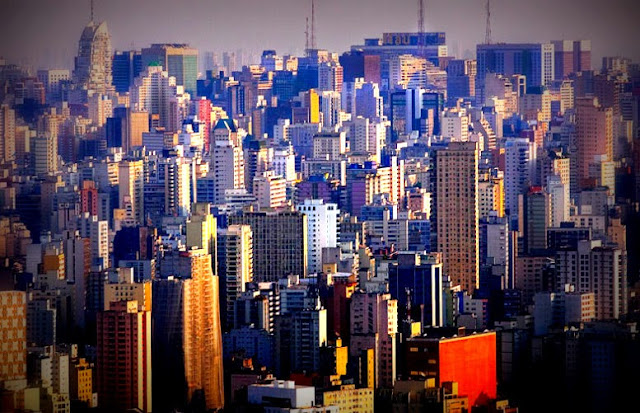 São Paulo residents should brace for a “collapse like we’ve never seen before” if the drought continues, warned Vicente Andreu, president of Brazil’s Water Regulatory Agency.

Where these pictures tell the story. 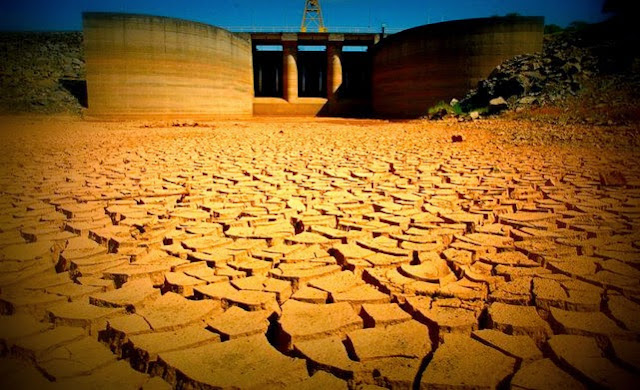 Or imagine what it must feel like in Australia where a spring heat wave is breaking records and the country just keeps getting hotter and hotter.

Australia’s summer doesn’t start until December, but the country is still baking in a record-breaking spring heat wave. On Saturday, Australia’s average high temperature of 97.5°F broke the record for the hottest October day since record-keeping began in 1910.

According to the Sydney Morning Herald, this weekend’s heat wave set records for daily high temperatures at 20 stations throughout the country. The town of St. George reached a high of 108.6°F on Sunday, and the suburbs surrounding Ipswich and Brisbane hit 106°F. 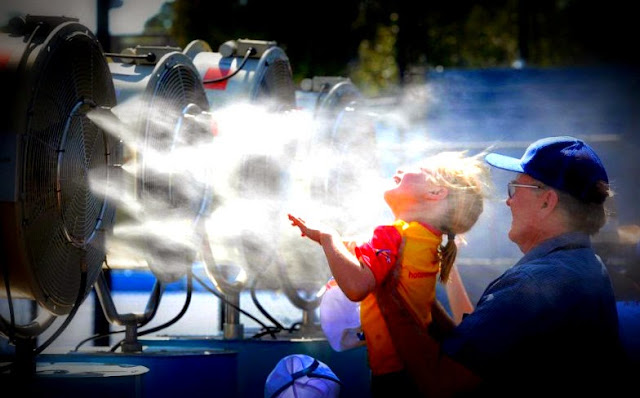 But even though his people are broiling like chickens, or chooks as they call them there, the country's climate change denying Prime Minister is doing nothing to fight the problem.

Despite this extreme heat, however, Australia’s federal leadership has done little to address the threat of climate change. Instead, the country has cut funding for key climate groups and initiatives since Prime Minister Tony Abbott took office in 2013.

Abbott’s administration eliminated Australia’s Climate Commission, an independent panel of experts which used to receive government funding to study the impacts of climate change (the group got enough private funding to come back as the Climate Council, and continues to publish).

And once called Canada CANADIA...

Now imagine what Harper tells Abbott when the two men get together for a sweaty session of mutual admiration.

Canada is dead last among industrialized nations in a new climate change performance index. "Canada still shows no intention on moving forward with climate policy and therefore remains the worst performer of all industrialized countries," says the report released by Germanwatch, a sustainable development advocacy group.

Now imagine the forests of British Columbia burning like hell fire, or Alberta slowly becoming a desert, or the lush fields of Saskatchewan turning to dust, or the East locked in the icy chill of another polar vortex... 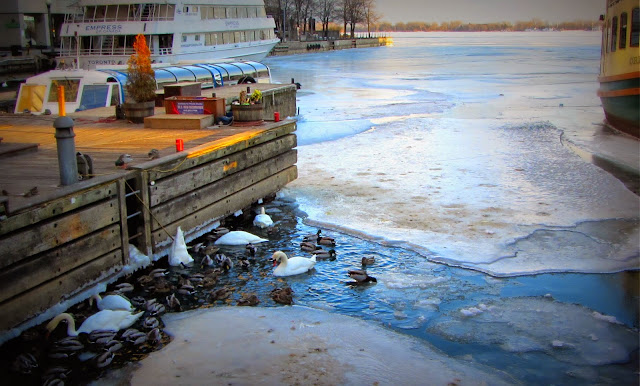 Like the one last year that reduced the mighty Great Lake where I live to this little patch of open water filled with dying birds.

And then ask yourself will climate change be a major issue in the next election? And the answer to that one is you better believe it.

If only for the sake of the children. Who will cry out one day:

"What have you done? What were you thinking? How greedy could you be?"

Climate change is coming at us faster than anyone imagined. And it's really this simple:

We must do what we must to defeat that criminal Con climate change denier.

Who would fiddle as the planet burns.

Before his madness consumes us all... 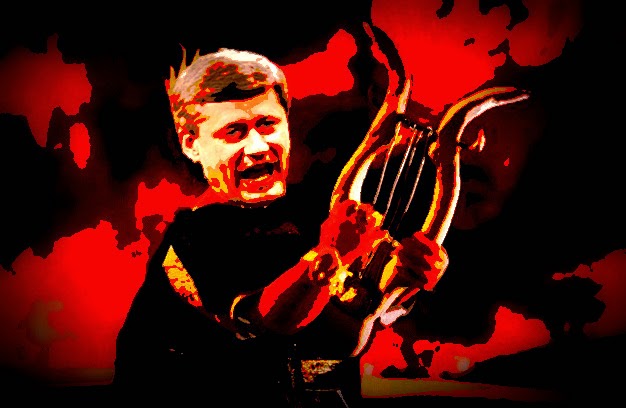 Alberta already is the driest and most water-poor of the provinces. One would think Harper would at least grow a brain and acknowledge that.....oh wait, I'm hoping for too much here.

Have only read the first two sentences of today's post and that in a nut shell says it all. Sums up the terror road Harper wants to take Canadians down for his power, his god and the benefit of his corporate friends. I hope that this will be his downfall - the veneer is wearing thin.

"Reason has no power over the delusions of an unsound mind", Lucy Maud Montgomery.

I remember reading this years ago and for some strange reason it has stuck in my mind........very appropriate these days, eh?

Another quote: "I'm not responsible for your behaviour, so please don't take credit for mine".........don't know who gets the credit for this one!

Words can be twisted and turned to mean whatever you wish them to mean........all in the interpretation of the reader/listener. It has been said that "silence is golden"! I will be breaking my silence at the polls......a lot of people in Toronto had the same idea!!!!!!!!!

WE as a race deserve every horrible, rotten thing that is happening and will happen to us as a result of our own unchecked, insane greed. Our children are far worse than we are because we raised them to be selfish, mindless barbie/ken-worshipping idiots the like of which no generation has ever been seen before. They had a choice but not anywhere near the options the older generation had and so we, the older generation of this world, are the authors of the catastrophies that are only just beginning to affect this whole planet. I pity our grandchildren because they are inheriting the table scraps of what was a once amazing and truly admirable country. harper is a symptom of our own societal sickness, Simon, not the author. No fucking idiot like harper can ever get into office unless the society he/they live in give their permission/approbation to such miscreants being put into power to "represent" the people. You can't get your clothes dirty unless you're rolling in the mud and we are rolling in the shittiest manure pile in the civilized world. Brazil couldn't ruin their ecological system for the sake of the almighty dollar fast enough (they're still doing it, by the way) and oilberta deserves any lousy thing that can happen to them because of the fucking tar sands. Face it . . . we're fucked and we deserve it.

A. 6:48, yes we deserve it. However, the children of tomorrow don't. They haven't been born yet. The poor in second and third world countries who never got to vote, who never used anything new or electronic don't deserve this. This all came about because people were greedy. It started with corporations and "trickled down" to the average voter, who thought their pay cheques would get larger.

Australia Tony isn't even smart enough to recognize they are running out of water, and need to get with desalination of ocean water. oh, right that might be radioactive after the earth quake in Japan.

Even if the drier, colder, hotter weather is not caused by industrialization, you can't deny climate change, is happening. People with any foresight might simply want to ensure water remains clean, fertile land is not paved over. In B.C. the provincial lieberals have decided they want to destroy more farm land so they can build Site C dam. Do we need it? No, but it will give fracking operations a huge wager supply. The fact it floods huge parts of the province, not a problem for the B.C. lieberals. Should the dam ever fail in the event of an earthquake, well parts of B.C. will be in Alberta.

hi Way Way Up....how nice to hear from you again. I hope everything is good with you. And yes you're right, because of the mountain barrier Alberta is a dry place and is prone to desertification. We know what has happened before in the prairies. And of course no place is warming up faster than the Arctic. So you would think that we would try to develop our resources with that in mind. But I guess the government like a lot of Canadians figured that a future threat shouldn't be allowed to get in the way of economic development. The problem is that climate change seems to be coming at us faster than expected, so we will not have the luxury of burying our head in the sand for much longer. I also realize that it's not just our problem. But if we continue to claim that we can't clean-up our problem until others do the same we will never get anywhere...

hi anon...I know it's hard to believe from the length of some of my posts, but I do try to get across my message as simply as possible. Because if it isn't as simple and as clear as possible it will not penetrate the distracted world we live in, where demagogues can confuse people and get away with murder. Harper and his gang have made an art out of confusing people, and they cannot be allowed to get away with it any longer....

hi Kathleen...you're right, that quote couldn't be more appropriate for the times we live in. The world really is turning into a mad house. The 24/7 news cycle has only made matters worse. Never have we had so much information at our disposal, and yet never have so many been so confused. We need to focus on what is important. And nothing is more important than protecting our precious earth without which we are nothing...

hi anon...the situation is indeed dire, and we have made a mess of the world. But for the sake of the generations that will follow us, we cannot give up. As a monumental procrastinator, who can always find an excuse to put off something until tomorrow, I can understand how easy it is to avoid doing what we must do to preserve our precious planet. But it's pretty clear that we cannot procrastinate any longer. Climate change is coming at us like an express train out of hell, and threatening the survival of humanity is the greatest crime possible. It may have to get worse before it gets better, but we must create a mighty global movement that will sweep all before it. For only that can save us. And although the so-called one percent have never been richer or more powerful, I note that even some of them are worried, and I'm still optimistic that disaster can be averted...

Alberta is the home of Canada's dirtiest oil--the Tar Sands, and uses large amount of water in the extraction of it. Imagine if Alberta has drought conditions for even 3 consecutive summers. Water would become so scare that folks in Fort MacMoney and environs would then be spending two or three dollars every time they flushed their toilet! But hey! folks make BIG BUCKS up there so they can afford it.