Stephen Harper and the Road to War 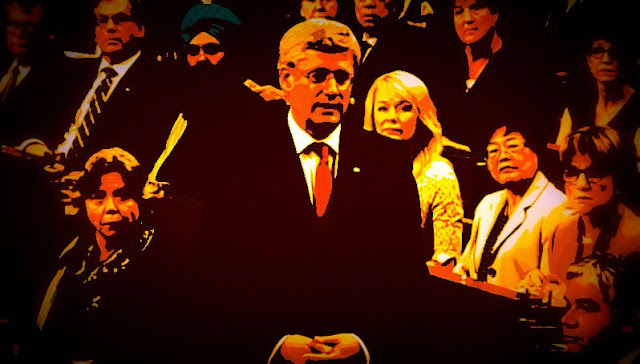 I have no idea which voice in his head was commanding him, but it was a very different Stephen Harper who turned up in the House of Commons today.  An unusually subdued version.

He reached out to the opposition, answered their questions politely, instead of mocking them, or setting his howling Con jackals on them.

But the essential message remained the same: He will lead us into a war he calls both noble and necessary.

Canada is preparing to dispatch fighter jets to Iraq on a military mission against Islamic extremists that Prime Minister Stephen Harper hails as “noble and necessary.”

“The government will act. We will act with our allies to make sure those capacities are degraded in a way that they will not continue to be a threat to this country,” he said.

And while it may not be hard to portray this mission as noble, with an enemy like ISIS, and with most Canadians supporting a military intervention, at least right now.

Portraying it as necessary will be considerably harder.

Because firstly, the kind of bombing campaign Canada will be asked to carry out is notoriously ineffective. 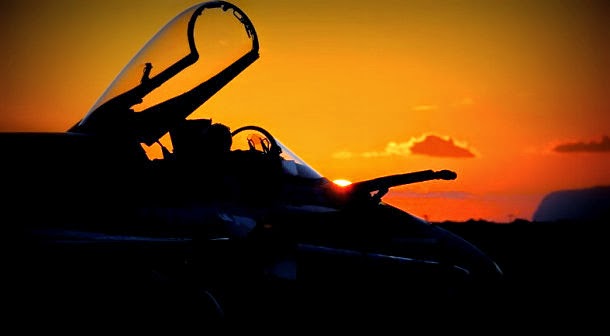 Bombing has not been decisive in any recent conflict. Far from it. It has been counterproductive and an expensive waste. In the past, pilots have quickly run out of targets.

Even in the first Gulf war, in 1991, when the enemy consisted of units of Saddam Hussein’s army, the US-led coalition soon ran out of targets. “We were bouncing rubble with billion-dollar missiles,” Colin Powell, American’s most senior military official at the time, observed after the war.

But VERY expensive, which should give Harper a real pain in the wallet.

Secondly, as George Monbiot points out, if we were going to bomb our way to victory in the Great War on Terror we'd have to flatten the entire Middle East.

How about blasting the Shia militias in Iraq? One of them selected 40 people from the streets of Baghdad in June and murdered them for being Sunnis. Another massacred 68 people at a mosque in August. They now talk openly of “cleansing” and “erasure” once Isis has been defeated.

In Gaza this year, 2,100 Palestinians were massacred: including people taking shelter in schools and hospitals. Surely these atrocities demand an air war against Israel? And what’s the moral basis for refusing to liquidate Iran?

Is there not an urgent duty to blow up Saudi Arabia? It has beheaded 59 people so far this year, for offences that include adultery, sorcery and witchcraft. It has long presented a far greater threat to the west than Isis now poses.

When the lessons of history couldn't be more obvious... 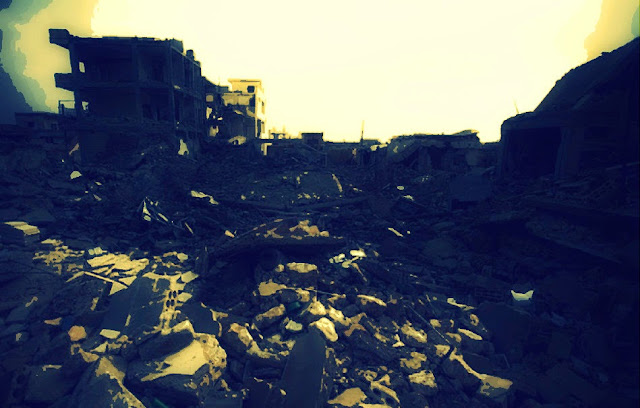 Whenever our armed forces have bombed or invaded Muslim nations, they have made life worse for those who live there. The regions in which our governments have intervened most are those that suffer most from terrorism and war. That is neither coincidental nor surprising. Yet our politicians affect to learn nothing. Insisting that more killing will magically resolve deep-rooted conflicts, they scatter bombs like fairy dust.

And Harper should know, since he could soon find himself bombing the same people he supported in Libya.

The Islamic State of Iraq and the Levant, or ISIL, which has seized parts of Syria and Iraq, includes a large number of volunteers from Libya who fought in the 2011 uprising that overthrew dictator Col. Moammar Gadhafi.

You know, that other bloody debacle along with the one in Afghanistan.

Thirdly, bombing ISIS with eight planes, will NOT eliminate the terrorist threat to  Canada as Stephen Harper claims. It will only increase the chance that we could be a targeted by some homegrown crazy.

Especially if Harper keeps mouthing off like a maniac, to impress his rabid base.

When the case for war has not been made, there are other ways we could contribute.

The first thing to remember is that sending our forces into combat is not the only alternative to standing on the sidelines and watching. The Harper government is among the world’s most vocal supporters of Ukraine and Israel – but no Canadian troops or planes have ever been involved in the fighting in those countries.

Opposition to the IS does not necessarily mean a direct combat role. Humanitarian aid, technical support, financial support, weapons, training – there are ways Canada can participate usefully in Iraq and Syria without intervening directly.

And if Harper thinks he can dip his toe into this war, and then get out quickly, just in time to win the next election by posing as a Great Strong Leader... 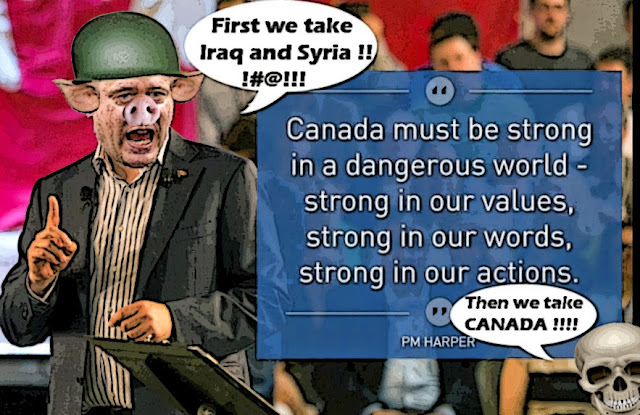 He must be deluded.

What is clear is that Mr. Harper wants to respond forcefully, as is his nature. He may yet make his case. But no one should believe that this is a battle that will begin and end with a few fighter-jet sorties.

Which is why I thought he looked a little nervous in Question Period today... 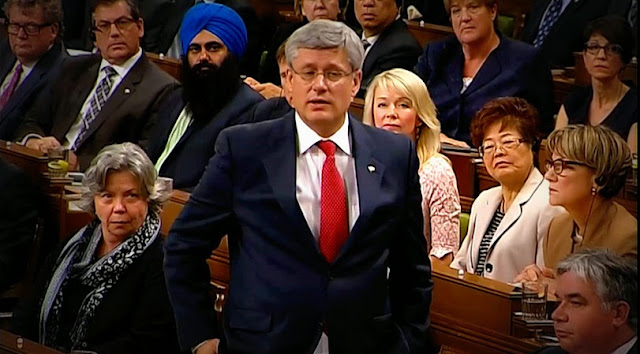 As if the implications littered like land mines across his road to war are finally sinking in.

For while he must be hoping this latest war will give him a short term boost, and maybe even dreaming it will give him an excuse to call an early election.

He must also know that he will be setting in motion forces he can't control.

And that they could help destroy him...

Everything about stephen herpes is manufactured. Even the image of him in parliament, has been crafted so the public sees him surrounded by women and minorities when in fact he only caters to rich white males. Ugh, its so repulsive to see people fall for his bullshit.

Harper lost in Space. Which character Dr Smith would he be?
http://thinkingaboot.blogspot.ca/2014/09/harper-lost-in-space.html

Do you notice that except for Harper's appearances in the House of Commons, there are usually lots of Canadian flags in the background for his photo-ops? Ronald Reagan used to wrap himself in stars and stripes ("If Dirt Were Dollars" by Don Henley) and Harper wraps himself in maple leaves.

No war since WW II has been noble or necessary. O.K. let me take that back. It was noble and necessary, if you were an arms dealer. All this war has been very good business for the biggest business in the world, the arms business. By going ahead with this "war" harper and his herd will shortly put in an order for some very expensive new jets. They are already talking about "maintaining" the current ones, at how many tens of millions did you say. Ya, and they don't have the money for health, education, or a national enquiry into the 1,200 murdered/missing First Nations women.

Stevie must be up to something, he is talking about new regulations to address the "short comings" of the current regs because they impact so negatively on Veterans. He must be getting ready to send more Canadians into the "hopper" of war.

While harper is standing around trying to look "normal" he is participating in another war which will kill a lot of people and not bring an end to anything except life.

Now did we hear stevie say anything about what is happening in Hong Kong? Not so much. Ah, yes ! oct. the day the trade agreement with China starts and their version of the national holiday. It is amusing that Canada's sovereignty went down the toilet on China's "national day". That's why stevie was up on his pins today making nice.