Stephen Harper and the Propaganda War on Canadians 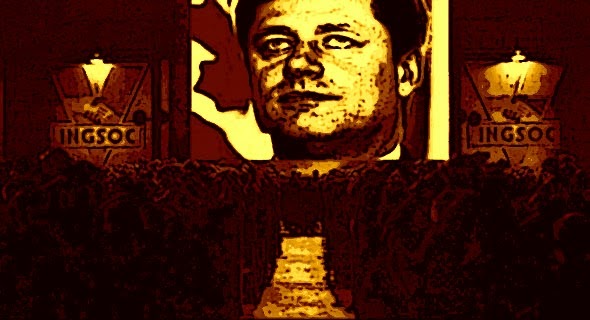 Ever since he came to power Stephen Harper has been trying to brainwash Canadians with the greatest barrage of propaganda this country has ever seen.

A barrage of lies and half truths worthy of Big Brother, and almost impossible to avoid.

They're on TV, and on the radio, they jump out at you in newspapers and magazines.

And now you can't even get away from them when you check out the weather.

For all you have to do is scroll down to the bottom of the newly redesigned Environment Canada site to see what I mean. 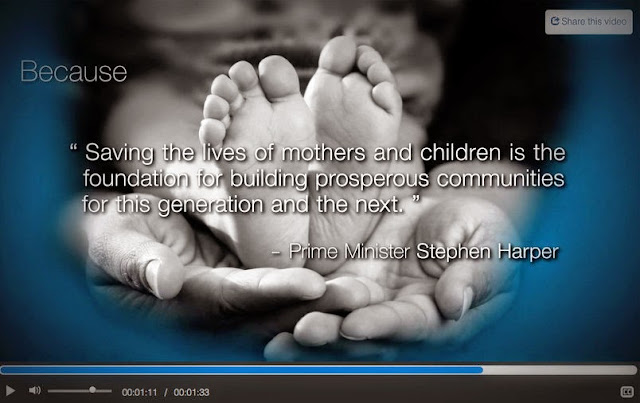 Videos with quotes from Chairman Harper, all designed to make him look good. And as a bonus, a link to his very own website.

Presumably so you can ask him whether it's going to rain or snow tomorrow.

And of course all paid for with OUR money.

But wait there's more. Hang on to your wallets because here they go again.

The Harper government has launched a $4-million national ad campaign celebrating the Fathers of Confederation and a country that has become “strong, proud and free” more than two years in advance of Canada’s 150th birthday in 2017.

Spending a fortune on ads to celebrate Canada's birthday, like they did with the War of 1812, to promote Great Leader's martial view of our history.

And of course promote HIM...

NDP critic Mathieu Ravignat said the size of the Canada 150 ad budget — this far in advance of the 2017 anniversary — raises suspicions the campaign is more pre-election positioning by a Conservative government that he says has a history of using public ad funds for partisan purposes.

Making it look like nobody loves Canada as much as he does and declaring in true Big Brother fashion that under his glorious rule we are "strong, proud, and free."

The Canada 150 ads include 30-second and one-minute spots in English and French that both conclude with the tag line “Strong Proud Free” printed across the television screen.

Which just happens to fit the theme of his latest propaganda effort... 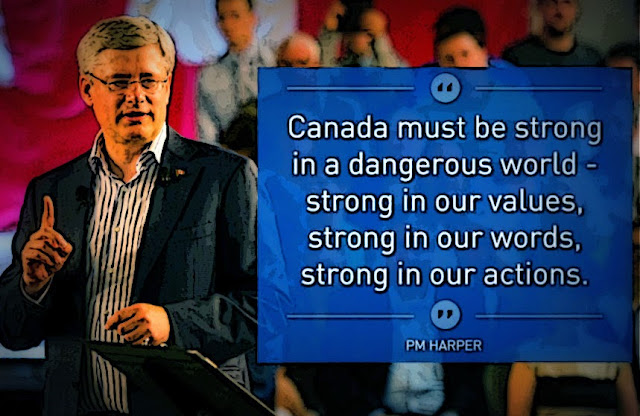 And is clearly designed to reinforce, or worse IMPRINT the message that only a strong leader like him can keep us free from the ISIS terrorists who would behead us in our beds. And make us proud to be Canadians.

When in fact we have never been weaker, more divided, less proud, and more oppressed. Nobody has done more to destroy Canada and its values than Stephen Harper.

And it's just more ghastly partisan propaganda, of the kind that wafts out out of this porky place.

Which also just happens to star Great Leader, posing as an economist. And features these videos at the bottom of the page... 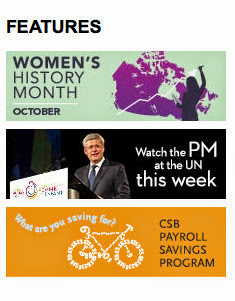 Because that's just what you need when you're looking for a job eh?

It's absolutely outrageous. It couldn't be more Orwellian. Or more INSANE.

But it does remind me of the time when the Cons also jumped the gun with this porky video.

With the new Canada Job Grant, the Government of Canada will partner with businesses, provinces and territories to help Canadians get the right skills for available jobs.

Which had to pulled off the air, and disabled on their site, after its claims were found to be FRAUDULENT... 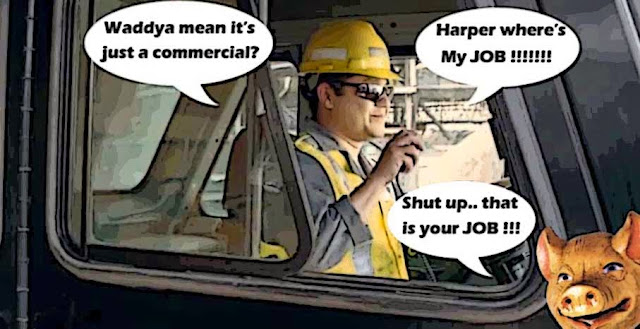 But fortunately I had managed to grab a copy of the video before the Con mob buried the evidence, so I was able to make my own video.

Which expressed how I felt about them then.

And still makes clear how I feel about them NOW...

They are the grubbiest, grunting, gang of Con hogs this country has ever seen.

Their depraved leader would be our Big Brother.

They are actually trying to brainwash us with OUR money.

We will not be safe until we defeat them.

And we will not be clean, until we get rid of HIM... 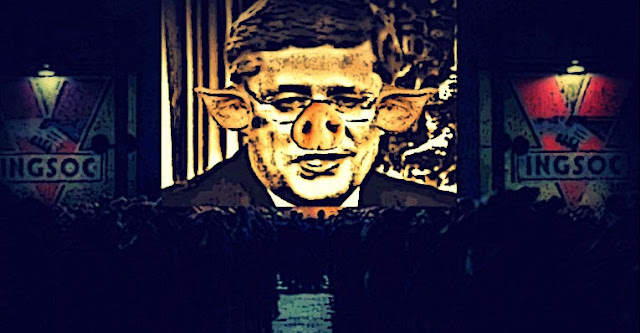 .. Yes.. PM Harper, his PMO and those quisling MP's Ministers & the Government Minders are folding together the function of our Government ministries. Thus Environment is falling into the realm of Resources as is DFO - Department of Fisheries & Oceans & Coast Guard. The pet affectation of Harper is Norwegian owned farmed salmon farms under Dept of Agriculture. We really don't understand the true role of Gail Shea at DFO in her 2nd stint there, following the failures of Keith Ashfield, nor do we truly understand the bizarre actions of Peter Kent when he signed for the gutting of Environmental Legislation along with saint Jim Flaherty and robo Joe Oliver.. Screw the caribou & the boreal, Harper = Paramountcy

It all kind of blended together.. with Nigel Wright riding tall in the saddle with Ray Novak & Jenni Byrne, legal beagle Arthur Hamilton.. and suddenly Canada was blasted by prorogues, omnibus budgets, extreme secrecy, denials and obstruction from Tony Clement and there was John Baird flitting about shrieking his famous prorogue call to arms 'we'll go over the heads of Parliament, the people, the Governor General.. we'll go to The Queen !'

Yes.. one Harper/Baird legacy shall be 'over their heads' .. they invented that one
but it has nothing to do with J Trudeau.. it was an insult hurled at all Canadians.. no mistaking that.

Massive election fraud followed, more secrecy, more revelations of what was buried in those time bomb Flaherty omnibus budget bills, more denials, more scandals.. lie lie lie about the F-35 boondoggles. Responsible Government is a euphemism for Secret Squirrel Economic Experiments Inc with spying on ordinary concerned Canadians part of the package.. The weather is simply what Stephen Harper tells us it is.. and The Environment can go stuff itself.. the PMO assures.

THE thing that makes most politicians vile disgusting creatures is they lie. The left, center and right wing political parties are full of masters of deception, fraud, manipulation and lying. It is up to the electorate to sort through all the rhetoric and determine what is the truth and which politicians are honest and deserving of our vote. Here in the U.S. the republican / tea-bagger cabal is poised to take control of congress because so many Americans have decided to be voluntarily ignorant about the policies of the right wing fanatics and the harm they will do to our national society and the basic foundations of our Republic. Canada is facing the same sort of propaganda campaign by the ruling party, the Cons, who are positioning themselves to win re-election once the polls show them with a commanding lead by calling for early national elections. I do what I can here in the U.S. to stem the right wing tide that may engulf us, and I am watching the political situation in Canada and hoping the people of that great nation will realize America is on the precipice of turning into a plutocracy and will reject that political path for their nation.

Not all politicians lie. Some in Canada are still honourable. Vote for those.

Canadians are not stupid.

LOL. Yes they are. Painfully so.

hi salamander....I remember the prorogation crisis well. I remember demonstrating in the street with progressives of all stripes, and thinking that this was the beginning of the end of the Con regime. But of course it wasn't, and before long it was business as usual. Still I do remember how desperate the Harper regime was, and I'm still hopeful that we can create some kind of movement in the next election campaign to help drive the Cons from power. If only we had managed to do it back then, think how much pain we would have avoided...

Hi Craig....I was stunned when I realized that the Republican tea baggers were about to seize control of Congress. I too thought that people would have realized what a danger they are to the U.S. and the world. However I see that some independent candidate may yet thwart them, so needless to say I'm keeping my fingers crossed. And of course my heart is with all the great progressives in the U.S. Wouldn't it be wonderful if one day we could create a big movement in North America so we could reach across the border and set an example for the world. It will happen one day I'm sure of that, but all we can do now is fight the right-wingers as hard as we can, and try to get the message out to those too ignorant or apathetic to vote. I saw a lot of amazing political activism in Scotland this summer, and it was truly an inspiring sight...

I am a Canadian.......I am Not STUPID! I only have ONE vote........and do so every chance I get, whether it be municipal, provincial or federal!