Stephen Harper and the Great Failing Con War on Terror 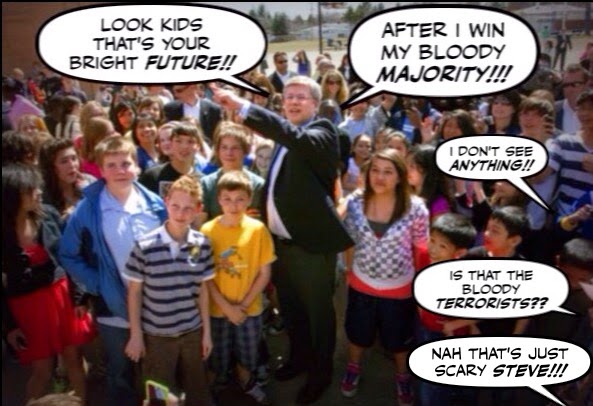 I don't know if you've noticed, but Stephen Harper has suddenly stopped talking about the Great War on Terror, and the Great Terrorist Menace.

These days he wants to project a  kinder gentler image as a Great Friend of Children Leader.

So now almost every photo-op features a group of bored kids in the background... 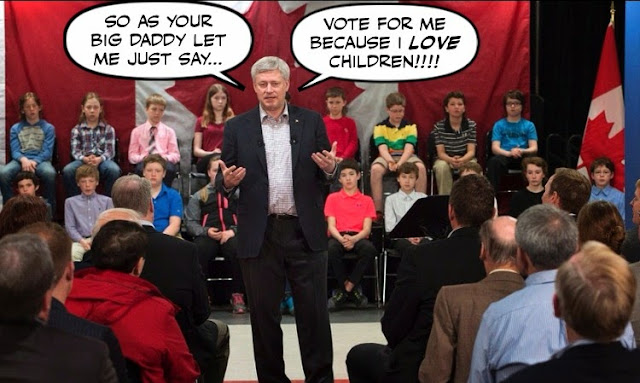 But of course, there's a good reason for that. He is desperate.

And The Great War on Terror is going badly disastrously.

ISIS seized control of the city of Ramadi on Sunday, sending Iraqi forces racing out of the city in a major loss despite the support of U.S.-led airstrikes targeting the extremists. 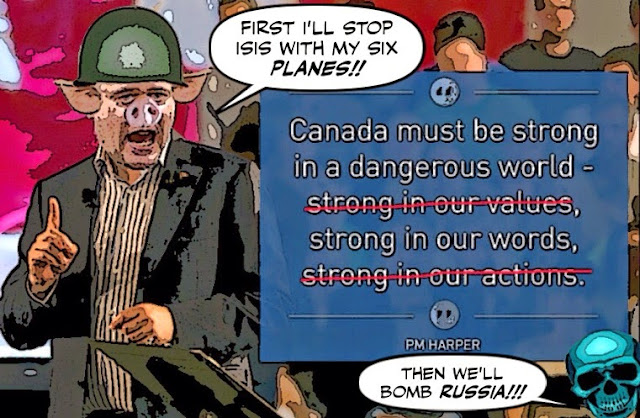 So he'd rather celebrate other smaller victories...

And have his pathetic stooge Chris Alexander claim it's just another victory on the road to Moscow....

Or another victory in the never-ending Con campaign to pander to the ethnic vote.

And as for the Great Terrorist Menace, it's not doing too well either. The Fear Factor is fading.

And even the MSM is starting to figure out, that Harper has been hyping the terrorist threat.

Prime Minister Stephen Harper never tires of playing up the dire threat the Islamic State poses to this country. On a recent morale-boosting visit with Canadian troops in Kuwait, he spared no rhetoric developing that theme.

But basically, a lot of it is hype. As a new report from the Canadian Defence and Foreign Affairs Institute makes clear, the threat Canada truly faces falls well below the global scourge Harper is fond of invoking.


And trying to scare Canadians in a deranged manner that must surely have some Canadians wondering whether he's losing the war AND his marbles.

As well his courage... 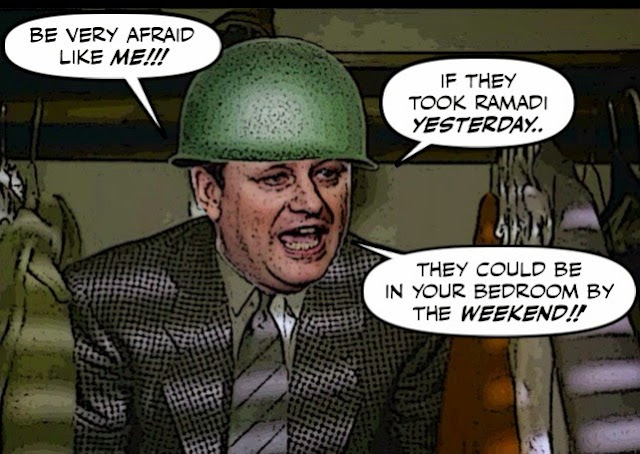 Or wondering why he's trying to terrorize us for crass political purposes. And how low can he go?

But sadly, Stephen Harper does have one consolation. He used the Great Terrorist Menace to ram through his sinister Bill C-51.

And if this is true, and I have no reason to doubt it, we're already living in the shadow of a police state...

So much for Great Friend of Children Leader.

And isn't it time Canadians started asking themselves where he would take this country? 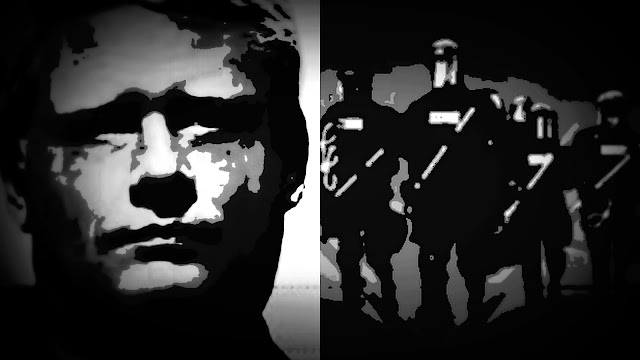 For a man who would play politics with war, and try to terrorize his own people, really is capable of anything.

And the truth is we will not live in a safe or sane country.

Three strikes on lil stevie today :and its not even noon. Scientists speak about Harpers fear of the facts. Canada's "new" climate policy regarded as failure by rest of world WERE NUMBER LAST . Harper too scared to answer questions even when he attends ( 1/3 of the time ) question period.

With the hell fire and brimstone crowd firmly in his camp a kinder more gentle Steve has to go out and pander to the traditional conservative base for his majority. This is a much less daunting task than for the other leaders who have to pull all of their support from the same rational but perhaps not politically informed pool of Canadians. Too bad there isn't another party consisting of moderate conservatives or a far far right wing nut party to steal some of Steves power base. As an alternative perhaps we could empower Duffy through crowd funding to spread the word about his former boss, It is possible he still resonates with the moderate conservatives. It shouldn't be that hard to transform his image from crook to victim ... he is more than half way there in my mind. He was just effectively doing his job in an environment that was promoted by his boss. He should haave known right from wrong but when you get caught up in that type of environment the yard stick gets terribly distorted and that a human frailty that many Canadians will forgive.

yes, the news showed the Iraq army leaving the city behind, but they forgot to take the weapons the Americans supplied them with. I.S.I.S. now has them. They have had to call upon the Iranian militia to deal with I.S.I.S.

Canada has spent a lot of our tax dollars propping up an Iraqi government which just couldn't cut it. it would have been better if we had stayed out of it and left Saddem Hussain in power. Look what we did to IRAQ.

Its about time Steve deal with the Canadian corporations who have $199 billion IN OFF shore accounts to avoid paying Canadian taxes. Yes, how about a war on tax evaders, the big ones. Then perhaps old Steve won't cut $30 Billion from our health care system in 2017. That would really help the children of Canada.

who are those children sitting in the back ground. did their parents approve their participation, or where they just bused in?

Simon Bill C-51 is no more than Martial Law all Canadians have to realize this. They can now break into our homes and drag us off never to be seen again. That is Martial Law. Slime-ball Steve rammed it through despite massive protests from all angles of Canadians. He believes he is a Military Dictator. I can't wait until they drag him off to the nut-house or loonie bin which ever.

Sadly, Harper is too dense to realize that every time a war has been declared on a noun (war on terror, war on drugs etc), it's gone badly....very badly.

Slimeball Steve is suddenly all that is good to all people. Seeing him amongst the children is so nauseating and atrocious as their future means nothing to him. Any prop to win the election is fair game to this THING we call PM. What next Stevie? Changing diapers at a long term care facility?
JD

That photo of Steve and the kids makes me think he will soon unveil plans for "Harper Youth" (Harperjugend)-- a youth organization of the Conservative Party. 8-)

hi rumleyfips...yes if only it was three strikes and you're out. But the good news, as I tried to point out in my post, is that the Con campaign is mutating like a virus. It's swinging from one extreme to the other, and that tells me that they are desperate....

hi anon....the Duffy trial resumes in just over a week, and it will soon force him on the defensive again. The Cons are so desperate that they are flying Laureen Harper in for another fundraiser in Bill Casey's riding. And when you see that and all the kids he's using as props, you know that the Cons are desperately trying to soften his image. And yeah, good luck with that one... ;)

hi e.a.f...yes Iraq is a real disaster. The Shia oppressed the Sunnis so much after they finally took power, that even though Muslims in Iraq are among the most secular in the regions, some of them at least trust the ISIS crazies more than they trust the Shia militia. The good news is that the new Sunni prime minister is at least reaching out to them, but the bad news is that Iran is the country best equipped to fight ISIS, but the Americans and our hapless Israeli stooges would rather see ISIS win, than allow the Iranians to fight them.
But yes, it is all a show, and Harper should be dealing with some of the bigger problems facing this country...

hi anon...if he does that he'll only make himself look bad. Notley is still enjoying her honeymoon, and if Harper tries to screw things up he'll only look like a bully. Which for some of the reasons I listed above is the last thing he needs...

hi Mogs....well luckily we still have the courts. All it would take is one or two cases, and the whole bill will be stuck there for ages. Or at least until after the election. Which is why we must concentrate all our efforts on defeating the Cons, because it is the only way we can scrap the bill....

hi Way Way Up....you're right, it's like they spin a bottle in the PMO every morning to see what war they will fight today. But of course it's a reflection of how Harper thinks. He has no opponents only enemies, real or imagined, who he must destroy. When I heard years ago that Harper was a student of Stalin I had a hard time believing it. But not anymore...

hi JD...I suspect that in addition to softening his image he is also trying to get some senior votes back. For as recent polls have suggested, some of the seniors who joined him after the terrorist incidents, have abandoned him again. But yes, using children as a backdrop really is appalling...

hi David...I had the same reaction. The only consolation is that a lot of the kids couldn't look more bored...;)

I think the best thing which could happen to Iraq right now is actually to be taken over by Iran. At least Iran is capable of securing the Iraqi borders. Yes, the Iranian government is a little to committed to their version of right wing religion, I can't say who is worse them or Steve. I do know Iraq needs something and its not what the Canadian/American, etc. armed forces are providing. There is too much loss of life right now.