Stephen Harper and the Great War on Dissent 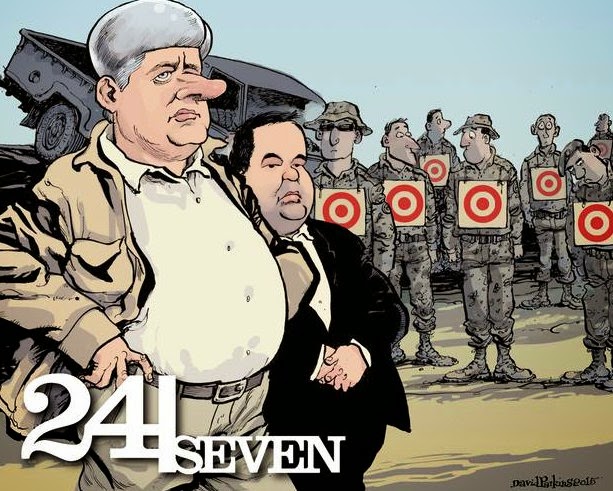 Well his Great War on Terror may have suffered a serious setback, after him and Jason Kenney were caught helping the terrorists.

By painting targets on our troops for the sake of a cheap photo-op.

And the bodies keep piling up. 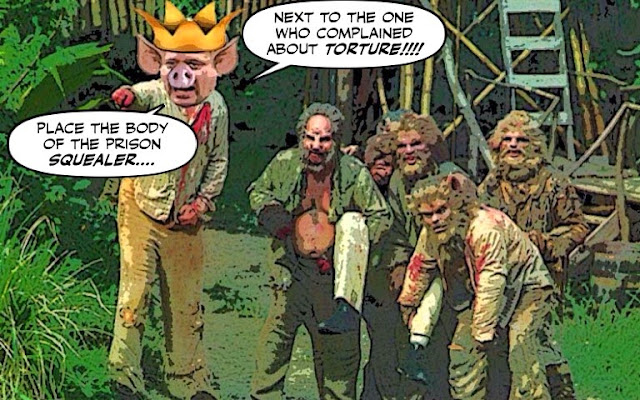 Forthright government watchdogs have a way of disappearing in Ottawa. They are quietly replaced. Their mandates are terminated or not renewed. They are suddenly found to be unqualified.

With the latest victim being Howard Sapers the correctional investigator. Relieved of his duties despite his excellent record.

He was a strong advocate for mistreated inmates. He highlighted the disproportionate number of aboriginal prisoners in the system. He asked why so many people with mental disorders were behind bars and why so many prisoners were released without adequate supervision. He warned that federal prisons were overcrowded and underfunded.

Public Safety Minister Stephen Blaney provided no explanation, other than noting the fact he had served for more than a decade. Canada’s last corrections investigator, Ron Stewart, served for 26 years.

For simply telling the truth the Con regime didn't want to hear.

And when you look at the list of all the others it reads like a Book of the Dead.

And you really have to wonder where this maniac is taking us... 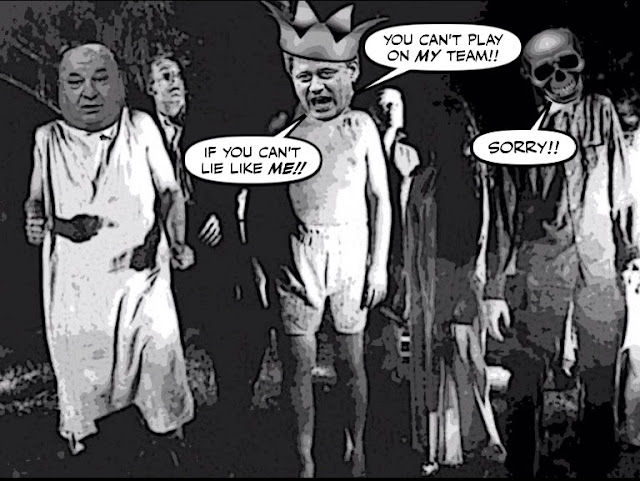 And hope that all those victims, and his own words, will come back to haunt him.

Nothing of these public officials was looking for a fight. They simply reported what they found and refused to back down, leaving Prime Minister to Stephen Harper to reconcile their departures with what he said back 2005, while opposition leader: “When a government starts trying to cancel dissent or avoid dissent is frankly when it’s rapidly losing its moral authority to govern.”

For let's be clear, Stephen Harper's Great War on Dissent is an all out assault on the truth AND our democracy.

He has lost the moral authority to govern.

He's trying to turn us into a police state.

And if we are to save this country we can't defeat jail him soon enough... 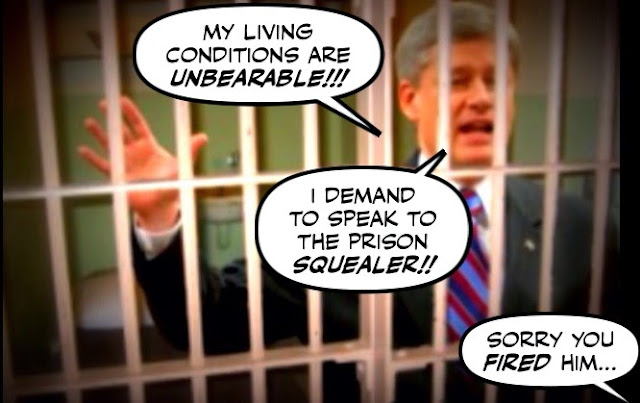 Well Simon his lies are starting to catch him in his own web of deceit. Now they are going to make it a wait for it a "hate crime" to boycott Israel or any goods or services originating from there. Why because Benji ordered them too that is why.

Look at those two grinning fools. It is getting so surreal I feel like I'm being forced into "The Twilight Zone." That story from the CBC should send chills down the spines of everyone who votes.

By Harper's own words he is completely unfit to govern. Why doesn't anybody ever take him to task for this? Why doesn't the opposition quote Harper and point to his doing the very things he condemned as opposition leader? I don't get it at all.

This one quote of his on lacking the moral authority to govern needs to go up everywhere.

Guess I'm going to be 'locked up'!

Howard Sapers was my Provincial MLA ( an opposition Alberta Liberal ) for a few years and a more decent man you could not have for a political representative. As an prison ombudsman he has been as good. My view of prisons is that " there but for the grace of god go I" and looking at the raft of miscarriages of justice cases in Canada I am proud to have Mr Sapers as Ombudsman - a quintessential Canadian whose values I aspire to . That the Harper government would not honour his compassion and decency toward the Canadians, deprived of their liberty - which should be sufficient punishment for anyone - not subjected to cruel and unusual punishments like overcrowding and lack of rehabilitative services which is what Mr Sapers advocates for, and want to replace him by not renewing his contract is testimony to the vindictive nature of the Harperites.
My current Federal representative , a Conservative, an ex fighter pilot and a possible future candidate for the Lougheed Martin board of directors, and probable , accessory after the fact for war crimes , from the Afghan detainee document scandal that ended, unresolved, with the prorogation of Parliament might one day welcome the intervention of a noble Canadian like the honourable Howard Sapers.

Steve wanted him gone so he could bring in the American private prison corporations. they are a disaster and you don't want an ombudsman around. It might alert Canadians to the terrible conditions.

Of course we can see more of us are going to jail now that Steve, the religious nut bar of the west, has decided to criticise Israel is now a "hate crime". this ought to work well. How is he going to deal with all the Israeli's who don't like Benni and Steve. This ought to be fun, if it weren't such an attack on our democracy and freedom of speech.

Steve has decided the new "not so common sense gun act" will now vest more powers in the cabinet. this is starting too look a tad to fascist for my liking. I don't think there is a law yet which makes it illegal to express less than positive opinions about Steve. Then he really will be on par with Putin, except Putin's smarter.

Yes, question: what is the difference between Putin and Harper?

Yes sir Noah he is definitively a liar and a cheat and quite well mentally unbalanced. Take comfort in the fact that the majority of his so-called 'Bills' will not pass muster in the Supreme Court of Canada. Better yet throw him out in the upcoming election and cancel all of his bills. Then try him and jail him throw away the key to his cell he can share with all the other trained Harper-con seals.

Putin knows Geo-politics Harper does not Putin is shrewd Harper is nuts Putin has a bigger arsenal of weapons than Harper. It will take Putin a very few minutes to fly across the Arctic Ocean under the radar and bomb Ottawa out of existence with their 'stealth jets' Harper can not do that to Moscow. Putin plays piano and sings better than Harper: