Stephen Harper and the Revolt of the Scientists

In his almost ten years in power Stephen Harper has done so much to diminish our once proud country and shame it in the eyes of the world.

And few things are more deeply disturbing and more disgusting than his Great War on Science.

For without truth there can be no democracy. Just a broken country stumbling blindly into the future.

But now at last I'm glad to report, the scientists are revolting.

Public-service unions are asking the federal government for the first time to enshrine scientific integrity language into their collective agreements. The language is intended to ensure that researchers employed by the government can speak openly about their work, publish results without fear of censorship and collaborate with peers.

Having finally decided that enough is ENOUGH. 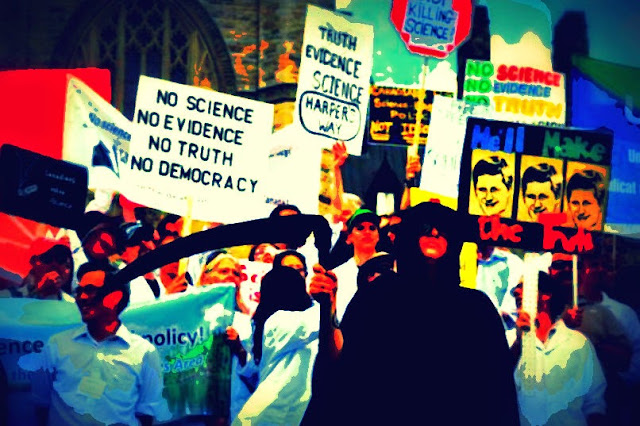 “Our science members said to us: What’s more important than anything else is our ability to do our jobs as professionals,” said Peter Bleyer, an adviser with the Professional Institute of the Public Service of Canada, whose membership includes some 15,000 scientists and engineers.

And the timing of this revolt couldn't better. With an election just a few months away. And the Information Commissioner preparing what will almost certainly be a damning report.

Federal Information Commissioner Suzanne Legault is currently conducting an investigation into complaints that scientists have been muzzled by the Conservative government.

We will be able to use all of the above to diminish him, and portray him as even more of a monster... 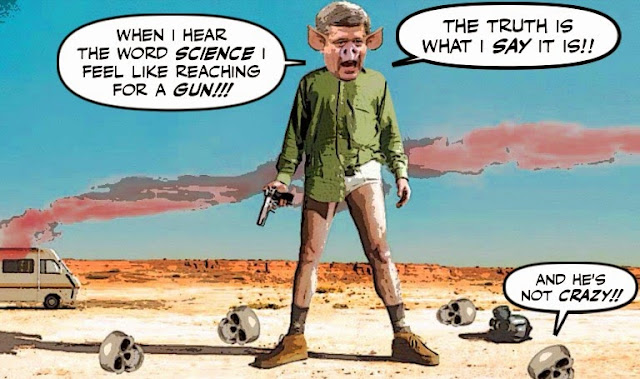 And in the process give ourselves one more issue, and one more slogan to use against him.

The monster is good to go.

They use lack of statistics now as excuses for not getting things done.

At first this may not resonate with the average Canadian as public sector unions are often viewed as holding the public hostage to demands for salaries and benefits that outpace those of the tax payers working in the private sectors. This however is an excellent example of how unions can protect the rights of their workers against tyranny and benefit the public at the same time. It may take a while to get the issue on center stage but he average Canadian will get it big time if they persevere..

All those scientists and their union out in an election campaign will be a nice touch. Of course Steve trying to arrest them for violating Bill C-51 might be even better.

Steve and his Cons will try to silence the federal scientist, but he can do nothing about their Union. They are entitled to speak as long and as loud as they can under the law. Who says we don't need Unions? It may help save Canadian scientists' work and our country's reputation.

A little off topic but here goes:

This was a preplanned execution of mentally ill man how could he walk by so many RCMP squad cars with a rifle in plain view in a car that belonged to somebody working in Parliament I guess they forgot they left the keys in the ignition at the Unnamed Soldiers Memorial and walked to Parliament instead of driving their car.

We need a serious investigation into this as it sits the emperor Harper is naked he has no clothes said the little boy in BC.

Just days before security goes from low to medium? Yet they could not stop him? The Harper government can bomb at will in other countries.

Federal scientists are primarily responsible for approval of new or modified materials and processes that could impact public safety, why would anyone want to muzzle them? The answer is that the the approval process often does not go directly from A to B with no uncertainty or questions. Scientist can start by applying the old standards, sometimes the material /process will pass with flying colours ,sometimes only marginally, sometimes new questions are raised.with no immediate answers. Following this typically the scientists publish their work, invite criticism/support/recommendations for future work from their peers. Unfortunately the public is most comforted to think that everything is black and white, questions or even the hint of uncertainty could drive them squirrely as in Duffy type squirrley causing delays and debates that could take an political eternity to resolve especially when political promises have been made. It is politically more expedient to muzzle, you can always find some hapless worker who broke a rule or if necessary a corporation to punish if things come off the rails.
Think about the impact climate change, pollution, pesticides, genetically modified seeds and food,nuclear, mining and transport of oil products has had on public safety versus terrorism to date. Are we balanced, what about the future? Could there be a con game going on?

hi anon...the gutting of the long form census was the first criminal act, and once they got away with that they thought they could get away with anything....

hi anon...yes what you say is true, there is a lot of unfounded resentment about unions in this country, and this could help people understand why unions are so important. There couldn't be a better cause and it could help bring both unions and scientists justice, and make the Cons pay for their for the crimes against the truth...

hi e.a.f... I think it would be great to have scientists out campaigning, just as great as having vets out there also taking on the Cons. People will listen to both groups and it will definitely strengthen our cause...

hi Mogs...yes that horrible incident was very strange, and although I mourn the death of that poor soldier above all things. I also find the suicide charge of that obviously mentally ill man truly tragic. And I can't help feeling that if his mental illness had been recognized earlier the whole horrible incident could have have been avoided...

hi anon...I believe the main reasons the Cons muzzle scientists is to suppress evidence about the impact of climate change, and satisfy Stephen Harper's need for total control. Their priorities are skewed, and if it's good for business it's good enough for them...

Harper would just have found another patsy. Why do you think he is withdrawing Medicare that would treat the mentally unbalanced? He wants more of these incidents.

You have no idea how frustrating it is when you get injured and are refused help on technicalities. I understand why this happened but I do not condone that misbehavior. I feel for the families of the two dead soldiers one in Quebec and one in Ottawa sad.

When I got injured through no fault of my own I was denied a PWD status [Persons With Disability] by the BC government three times even though I had an Orthopedic Surgeons Legal Medical Report on the condition of my shattered knee. As well as my legal medical report from my family physician.

The fourth time I found an advocate and voila I followed her advice I got the status. I can imagine the fellow who ran over two soldiers and the one who shot one where extremely upset with their lack of support. Harper is doing this on purpose his mind is twisted he got the bends.

They turn down everyone that needs medical care and attention to save their precious budget. They know 50% will give up after being turned down once. Then they cull another 25% who try twice. By the third time only the strong survive the weak are MIA. The fourth time they finally give it to you because they realize they could face a lawsuit next. So how is a mentally challenged person enabled to navigate these cruel waters?

I worked at Kinsman Camp Horizon and I met the kids who were mentally challenged physically challenged Diabetes you name it all kinds of PWD's. I was 14 and at first I was challenged because I had never faced that before. But I swiftly learned that if you give them warmth and love from your human heart they love you back from their heart and appreciate that you appreciate them in spite of their affliction. I remember one little 10 year old who had autism and in a wheel chair. I used to take time out of my day to talk to him. He was incredibly a brilliant young man he said to me one day at that summer camp near the Rockies [Beautiful environment] you are really smart. I said no no buddy you have way more smarts than I. It came from my heart because I could hold a conversation with the kid about anything under the Sun and he could keep pace with me and at times accelerate past me. It was a wonderful eye opening experience.

I am no longer afraid of afflicted people they just require more care and attention and above all the warmth of human love straight from the heart.

Gagging scientists from speaking freely about their research. Numerous scientists have been prevented from speaking to the media, especially those researching the environment. The government has also been accused of sending “minders” when some scientists have attended international conferences, along with speaking points, to ensure they stay on message.

In 2013, the Professional Institute of the Public Service of Canada (PIPSC), which represents 20,000 federal scientists, found that hundreds of their members said they had been asked to exclude or alter technical information in government documents for non-scientific reasons, and thousands said they had been prevented from responding to the media or the public.

Thats sad David but did you not realize the Christian Alliance Church trumps science? The bible is the only science you need? There are 60 members of the Harper-cons that attend that same church if you can call it that. So on Sunday they attend come Monday they are planning bombing that target innocents among other things. Like factories waterworks trains airports schools hospitals universities dams hydro the list is longer than my arms. Oh goody two shoes Christians ya right the religious far far right. A very dangerous combination.