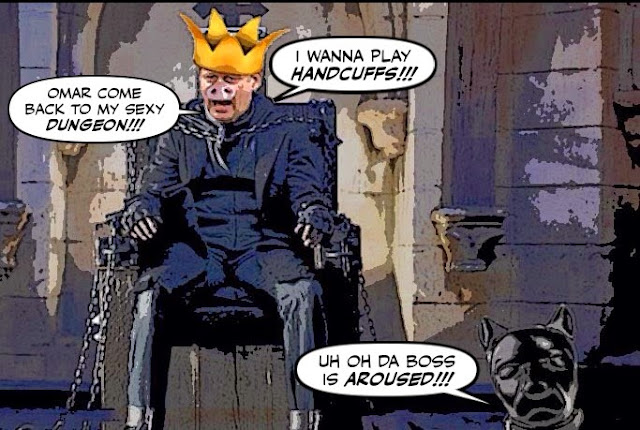 Oh dear. It looks like Stephen Harper is not too happy to see Omar Khadr go free.

He wants him back in his dark dungeon so he can torture him some more.

And his barely repressed desire to inflict pain on others, or jail them, is making him sound like a crazy man.

Prime Minister Stephen Harper is unapologetic about his government’s efforts to keep Omar Khadr in prison, saying on Friday that his thoughts would remain focused on the family of the U.S. soldier who was killed.

“Mr. Khadr, as we all know, pled guilty to very grave crimes including murder,” Mr. Harper said during a press conference on Friday. “At this time our thoughts and prayers are with the family of Sergeant Christopher Speer.”

Because you really have to wonder which voice in his head is making him believe he's a Christian, and which one is calling war murder.

When as David Glazier, an expert on military law points out, it's no such thing.

"The law of war does not criminalize throwing a hand grenade or shooting at soldiers; that is, in fact, what militaries around the world are called upon to do."

So Khadr committed no "grave crimes," the kangaroo military commission that tried him had no right to sentence him.

"There's no plausible reason for the government to be using these military commissions, they're really just a complete failure on every level," Glazier says.

And of course he never should have been jailed, let alone tortured, because he was a child soldier... 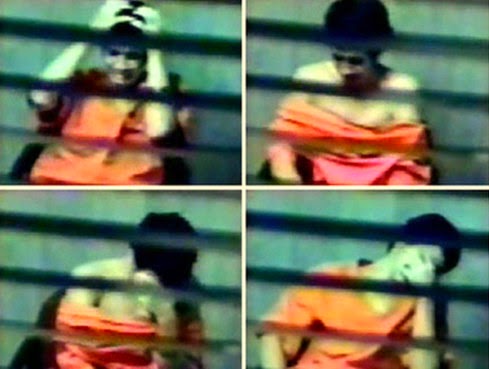 But then of course Harper is desperate, because his cannibal base is demanding a piece of Khadr.

And this absurd excuse for keeping Omar in jail just isn't working anymore:

“Our government’s priority in these matters is always to make sure – first and foremost – to keep in mind the protection and security of the Canadian population,” Mr. Harper said.

Not when Canadians have finally had a chance to see and hear from Omar, and it's clear that despite what Great Ugly Leader says, he's no threat or no monster. 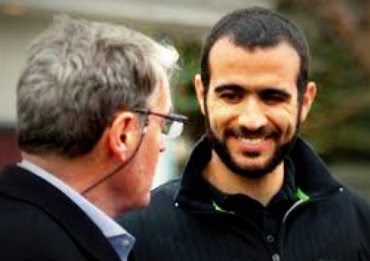 A University of Alberta professor, one of a group who tutored Omar Khadr over the last few years, rejects the federal government's continuing characterization of him as a terrorist.

"Our government, it seems very clear to me, decided a long time ago that Omar Khadr would become the poster boy for terrorism — a 13 year old boy," religious studies professor David Goa told Edmonton AM host Mark Connolly Friday.

Goa said Khadr's relationship to others, even in prison, indicates he will succeed as a free person. "He is completely centred a deeply contemplative spirit, quite humorous and a very good soccer player. "I have every confidence in him."

And Harper's continuing sadistic persecution of Khadr risks making HIM look like a monster... 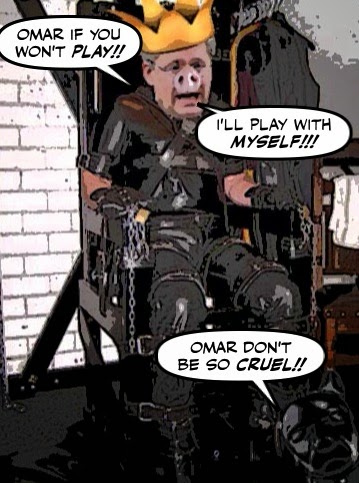 Or a depraved maniac.

So the Cons can't use Khadr to raise funds from their rabid bloodthirsty base anymore.

And that's why they're panicking... 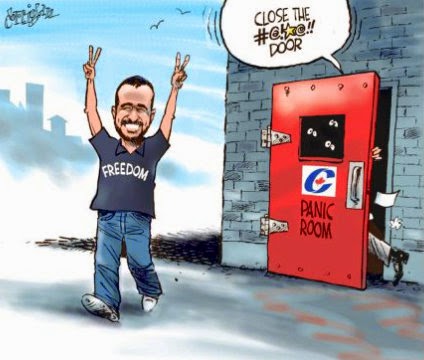 And don't worry about Kinky Harper.

He's been torturing us for years.

But we've got plans for him... 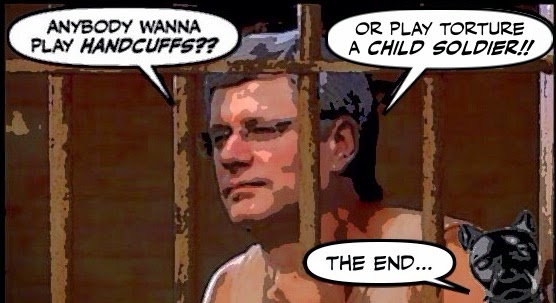 poor deluded Steve. Thinks his thoughts should be with the soldier's family. Well, if you are a soldier and you go to war, you can expect to get killed by other soldiers. Yes, its sad the other man is dead, but no one asked the U.S.A. and Canadians to get into this war except perhaps oil companies and companies which supply countries at war.

Steve just doesn't get the rule of law. He has his own deluded sense of law and religion. Yes, the Christian and Missionary Alliance Church, which believes the bible is inerrant" and the second coming is "imminent". Guess Steve didn't read the section about turning the other cheek or the part about forgiveness. Looks like Steve is stuck some where in the old testament. As to the second coming, he really must be nuts. Taliban north is more like it.

Harper needs to understand Omar Khadr is no danger to anyone in this country, which is more than can be said about Steve and his Cons. Like his Cons, who have continually broken the law in this country. Shall we once again list them:

Face it the Cons have more charges against them than the average Hell's Angel's chapter.

Steve might want to remember, Omar Khadr still has appeals pending in the U.S.A. and even Osama Bin Laden's chauffeur was acquitted on some charges on appeal. So what is steve and his Cons going to do when Khadr is aquitted of charges on appeal? He is going to look some stupid.

A CBC poll reflected approx. 74% of the respondents had changed their mind about Omar Khadr since seeing the interview. Khadr may be 28 but he really looks like a kid. He doesn't scare me. He can visit, stay, live next door, etc. Harper and his cons, well I'm as usually voting for them as terrorists of the decade. They want to cut $30 billion from our health care programs in 2017 and then of course there is the way they treated the Veterans, their refusal to deal with the issue of 1,200 murdered/missing First Nations women, the lack of health care in the North. Like what is with that guy. Is he so sick or just crazed. Steve Harper is the danger to this country and its citizens. Passing 10 bills which all got rejected by the Supreme Court of Canada, doesn't sound like a guy who has all his marbles.

Do all people who throw grenades in war get charged and thrown in jail. Just wondering. Or isn't the other side allowed to fight in the wars we are in? This has always been crazy beyond belief.

"Face it the Cons have more charges against them than the average Hell's Angel's chapter."

If your statement was not true it would be funny but because it is so true it is a sad reflection.

how about all the american murderers who slaughtered over 1,000,000 Iraquis for no good reason? Who the fuck is putting them in jail? what about all the people the americans needlessly slaughtered FOR NO REASON AT ALL AS HISTORY HAS NOW POINTED OUT in Vietnam? Look at what they're doing to people in Guantanemo Bay or what they did in Abu Ghraib. who the fuck is prosecuting those sick fucks? who the fuck is prosecuting the american gestapo cops who have murdered over 400 american citizens this year (2015) alone?
Why isn't harpie pissing his pants living next door to a country that considers wholesale slaughter "patriotic"?
Of all the cowards in all the world, we get stuck with the biggest sissy in our history for prime minister.
WHAT THE FUCK?!?!?!

Who knows, perhaps one day Khadr will enter provincial or federal politics and be elected the new MLA / MP for Harper's riding. Wouldn't that be something!

Harpers continued attempt to put Omar back in Jail is completely neurotic,.also his hatred of Omar is palpable.
Look closely though, because this is the real Harper.

Omar Khadr out on bail
MPs Paul Calandra, Charlie Angus and Sean Casey react to the release of Omar Khadr on bail

Who ARE all the people who work in the PMO (Prime Minister's Office)?

Is there a current list somewhere on the Internet? I read somewhere that there's about 100 people who work in the PMO.

http://en.wikipedia.org/wiki/Omar_Khadr
If the opposition parties make a real effort to go after the youth vote, the federal Tories will be decimated in the election, as in Alberta.

Face it the Cons have more charges against them than the average Hell's Angel's chapter.

The Cons really are a criminal organization, without morals and totally incompetent.

hi anon...you know there are many aspects of the Khadr case that not only make no sense, they are totally insane. There is a reason this case has bothered me so much. For not only does it disregard the law as we know it, it replaces justice with vengeance. And if that is allowed to become the norm as the Cons are trying to do, it will lead us straight to the rule of the mob, and outright fascism...

hi anon...exactly. How anyone could declare Omar Khadr to be the only war criminal of the Afghan war is absolute madness. I simply can't understand how anyone could think that. It's a fabrication worthy of a show trial. And the fact that Omar was a child soldier makes it even more obscene...

hi David...yes he is an impressive young Canadian isn't he? I would have defended him even if he was a real bastard, because he WAS a child soldier. But seeing what a nice guy he appears to be, was a real bonus. I wish those bastards would just leave him alone and let him live his life. But let's not forget he has already done us a great favour. For not being able to demonize him has undermined the Islamophobia behind his whole campaign. Wouldn't it be great if Omar was able to contribute just by being himself, to the defeat of the Con regime. Now that would be special...

hi Pamela....yes it is an act of vindictiveness of the foulest kind. And only a psychopathic bully like Harper could pick on somebody who has already suffered more than enough. I find every aspect of this case, and the blind hatred so many Canadians have for him, deeply deeply disturbing...

hi David....I have never been able to find a complete list of those who work in the PMO. But needless to say I would love to have one, so I can see how many are products of the many right-wing schools out there. Are they coming from the Manning Death Star or are they graduates of right-wing training centres in the U.S.? Oh well, we'll see a lot of them at the Duffy trial, and ALL of them at their trial for Crimes against Canada...

You can get the info from GEDS http://geds-sage.gc.ca/en/GEDS?pgid=014&dn=ou%3DPMO-CPM%2C+o%3DGC%2C+c%3DCA . Each unit of the PMO has their people's numbers there. It is not one single list but you probably could get all the info in 10-15 minutes.

hi jrkrideau...thanks for that. I love the way this blog's readers help out each other. I'm proud of that and proud of you...

hi anon...I do hope the progressive parties make a real effort to go after the youth vote, instead of writing them off. Because it is a vicious circle. Because the youth don't vote in great enough numbers, the parties all but ignore then, so the youth can't see why they should vote. Let's break that circle all of us in our own way, and see how many younger Canadians we can get to the polls. For if we are successful they will help crush the Cons....

It would be just dessert if Omar ran as an independent federal MP in Calgary Southwest won and defeated Harper. Don't forget he is staying with his attorney Dennis Edney and his wife so he is going to get the education he was denied. It seems to me he is very intelligent.

Check out that CTV video feed in the last link Ya hey I love it Harper's ship is sinking fast ;) While Omar's is sailing steadily forward to greener pastures.

We have already entered fascism in Canada in the year 2011 when Harper got his so-called majority.

It is a no brainier that something like bill C-51 was a next step. Harper makes Mussolini look like an angel.