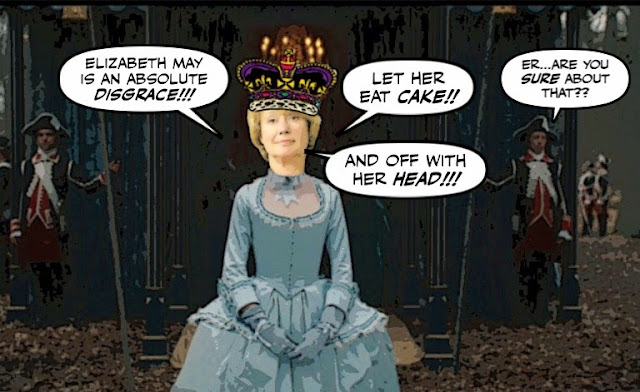 Oh boy. I knew it was just a matter of time before Margaret Wente, our Marie Antoinette, would look down from her high throne.

Or her high horse in the Con media.

And condemn Elizabeth May in the most contemptuous manner possible.

Elizabeth May, however, loves the media, and they treat her well. The fact that she’s a little wacky is considered part of her charm. She is a sort of parliamentary mascot. Nobody takes her seriously, but she gets respectful coverage because her cause is thought to be high-minded.

When in fact more people take May seriously than they do Wente. She is high-minded unlike that Con hack.

She is right on most issues, including this one.

Which is more than we can say for our Marie Antoinette.

And as for this piece of soggy cake...

It couldn't be more hypocritical.

And the fact that she gets away with stuff no other writer would.

And if she didn't work for the right-wing Globe, would have been judged unfit for her position long ago, and relegated to the nether regions of the classified ads section for the rest of her shabby career. 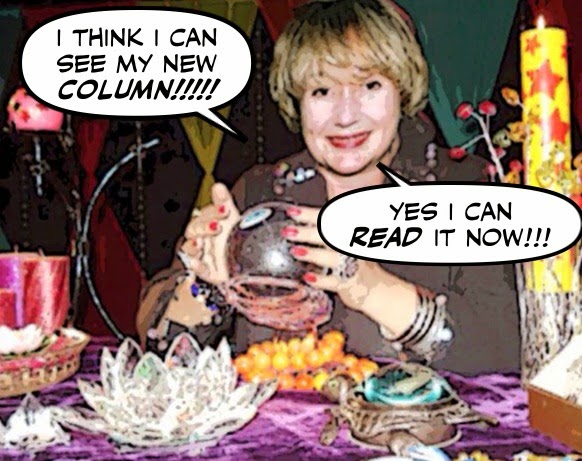 And a disgrace to her profession...

Wente is simply a windy bag passed her prime, if she ever had one.

"parliamentary mascot" where has Wente been lately? Under a rock? Elizabeth May is an M.P. and no one's mascot. Referring to May as a mascot is like when that Con minister back in the day referred to Sheila Cops as "baby". As Copps said then, I'm no body's baby. and May isn't anyone's mascot. She is the leader of a Canadian Political party and ought to be treated with some respect. I have no problem with what May said at the dinner. She was bang on. She had nothing to apologize for. In my opinion, the Cabinet are a bunch of idiots and are all about themselves, not the people of Canada. Lets remember the Cons have about as many in jail, being investigated, and awaiting sentencing as any self respecting Hell's Angels chapter. So they ought not to complain about what Ms. May says. She isn't in jail, hasn't committed fraud, etc.

Um I feel compelled to comment here because the word 'fuck' is the most versatile word in the English language it is not necessarily a cuss word depending on how you use it. It can be a noun or a verb or an adjective and a pronoun and many other English literature features. So who gives a fuck eh?

Marg is a hypocritical Christian Alliance weirdo who worships Harper at the alter. I remember when I was young my father wanted to take us to the Roman Catholic Church every Sunday. As a child I had to get dressed up in a suit and tie. My two older sisters had to get dressed up too. Then my dad was always late we lived in the country and he would speed to the city to go to the nearest Roman Catholic Church. I remember clutching the seat as this was pre-seatbelt safety time and hoping we would make it alive.

Hypocritical all of them including my dad and the priests that rape little boys and girls. When I was in New Mexico USA archeologists dug up in a walled compound inside the Jesuit compound and church and found the remains of many children that 'disappeared' in the period of 1600 to 1700 ugh.

Things have not changed much in the last thousand years Harper is just another juggernaut the imperial 1% is throwing our way.