The Madness of Stephen Harper and the Insane War on Science 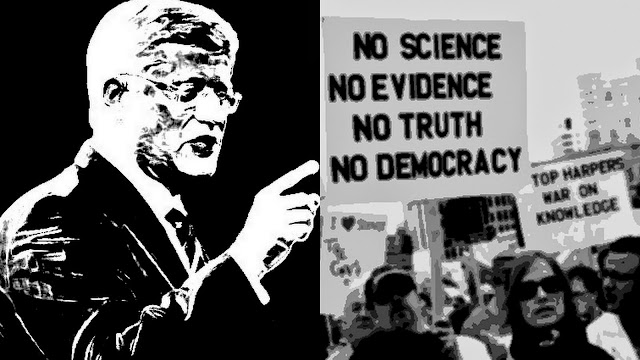 In my last post I looked at Stephen Harper's Great War on Canada.

And because it's such a vast subject and such a long nightmare, it raised a lot of disturbing questions.

Like is he the Axis or the Essence of Evil? Or is he just CRAZY?

So I'm really grateful that when it comes to his Great War on Science, it's a lot simpler.

It is totally insane.

Casting an eye over the latest contract demands by Canada’s federally employed scientists and researchers, it’s tempting to check the calendar. Is this 2015 – or 1615?

The 55,000 members of the Professional Institute of the Public Service of Canada are demanding provisions that would allow scientists to — wait for it! — speak openly about their work, publish results without fear of censorship and travel abroad to collaborate with peers.

And since he has been muzzling scientists, or terrorizing them, he is without a doubt monstrously evil... 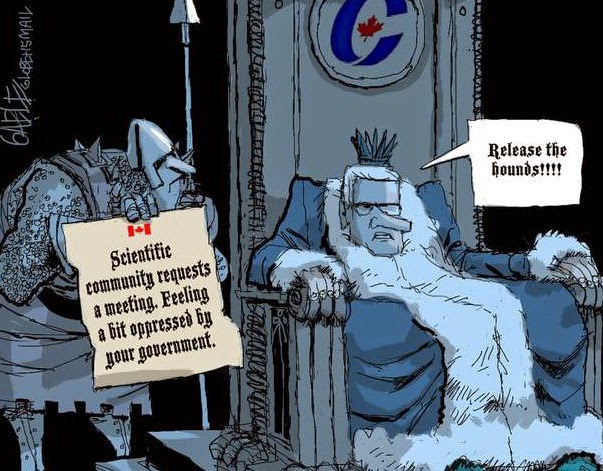 A survey from Environics Research last year found that 91 per cent of government scientists feel they cannot share their expertise with the media without facing censure from their bosses. 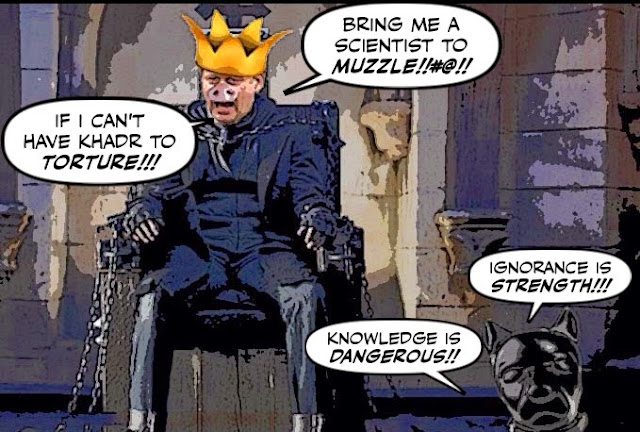 And since he's threatening our lives.

As Katie Gibbs of Evidence for Democracy said: “Current media policies could prevent taxpayer-funded scientists from sharing their expertise with the public on important issues from drug safety to climate change.”

Threatening to demolish our temples of knowledge.

The researchers’ union points out that under current plans, more than $2.6 billion and 7,500 positions will be eliminated by 2017 from the top 10 science-based departments and agencies. Meanwhile, some departmental science libraries have been shuttered, with their contents sometimes ending up in dumpsters.

And offending our democracy, in a never-ending  and deranged manner. 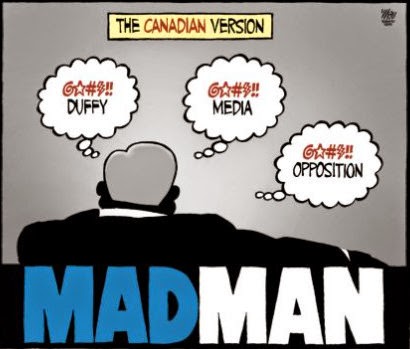 And the only real question is how soon can we defeat him?

And make all all our lives safer and more Canadian.

By sending him at last to the place he belongs... 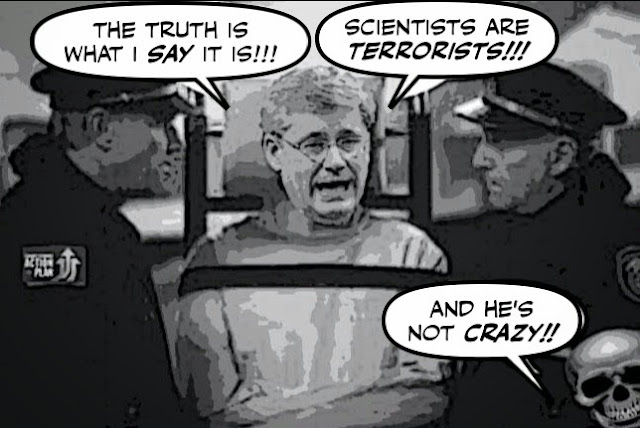 As I said before I'll say it again this 'Christian Alliance' group are terrorists all 'in the name of god' they are a foul despicable lot. They go to church [or is it a satanic lair] on Sunday's then come Monday they bomb other countries we are not at war with. What bible are they reading? I think this one:

Hi Simon You have to watch this on how badly Omar Khadar was treated by the Americans and approved by the Harper regime of stupids fools.

BTW, my name is Irene and I follow your blog daily. I also support Justin T.. The NDP do not fit my views and to be honest, it's mostly seeing them ruin the provinces that they were premiers in.

Harper is a danger to all Canadian's even those who blindly support him.

He needs to go to jail or sent packing to his beloved Republican party who according to Party of one created this monster. I do not feel sorry for Harper or his wife Laureen but I do for his two children who will bear the brunt of his shenanigan's when Harper is long gone which hopefully is Oct 19 of this year.

You are going to enjoy this little clip:

Pay close attention to the bleating sheep in Parliament worshiping a 'cold blooded murderer' as a 'hero' @ 4:05 minutes in. Bout sums up the fools on the hill not only did Kevin empty his 14 bullet clip automatic pistol into Bibeau then parliamentary security came over to continue to riddle the corpse of Bibeau with bullets is that not a hate crime? They wanted to make sure he did not live to tell his side of the story how his majesty Harper the PMO and the RCMP were all complicit in this well staged event. Otherwise how is it possible to have a camera man stationed to film the event?

I thought the scientific comunitity was quite self regulating and supposed to be evidence based. If one of them passes some bull shit as science their colleagues hammer them and they lose all credibility.

Following up on my other comment. You would think meddling in a perfect system would be anathemic to conservative doctrine (doesn't exist) but infact out spoken scientists are the anathema to moneyed intrests.

Those who create reality hate science. Its the only thing stopping them from having Wyle E Coyote moments.

hi Mogs...as you know I am an atheist, but even I can't blame any religious group for Stephen Harper's behaviour, because I simply don't believe he is a Christian. Like everything else about him that's also fraudulent...

hi anon...I've seen that doc and it both moved me and infuriated me. I've said I consider the Khadr case to be one of the most shameful episodes in modern Canadian history. And nothing will ever make me change my mind. He was a child soldier, and his treatment was abominable...

hi anon...I would love to see him locked up in a place where he can do no more harm. Buy I'm confident that even if he avoids a prison sentence, he will be send into exile in his own country, and will quickly be forgotten. For he has contributed nothing but evil , and we can't get rid of him soon enough...

hi Irene...I try to stay away from taking a partisan position, and welcome progressives from all parties. That sometimes means that I get attacked by all sides. But the way I see it somebody has to try to bring us all together. And the only thing I really care about is that the Cons be defeated before they wreck this country even more than they already have. So please feel free to call me Saint Simon.... ;)

hi anon...yes that's a position I hold too. Not just bad for progressives, but also bad for conservatives. Unfortunately some Cons who should be on our side are blinded by ideology, or easily fooled, and his demonic hold on them continues....

hi Mogs...that is a pretty creative video, I'm going to have to learn how to do that. One of these days I'm going to have to read my video editor's book of instructions, instead of just winging it, or making it up as i go along. But as for our "hero" I don't consider shooting a man who he already dying and had I believe one more bullet in his gun, if any, to be a heroic act...

hi anon...yes I have a scientific background myself, so I am particularly offended by Stephen Harper's insane war on scientists. But he is a rabid ideologue, and thinks he can create his own reality. When in fact the truth will set us free and he should be confined in a mental institution for the way he has behaved...

hi anon...you know Harper isn't even a real conservative. Certainly not a real Canadian conservative, like the decent Joe Clark and others. He has corrupted everything even his own party...

hi Simon you already do that with pictures I am positive you will not have trouble doing that in video. Your are a creative young man.Go for it you will probably hold water with Stephen Colbert and Rick Mercer. I wish you all the luck in the world man! Shoot for the top of shuttle sarcastic informative entertainment. Now I am bleating like a sheep but I mean what I say It try to think it out.

Ah Simon sometimes you make me cry not because of race religion gender or just being you it is the people that are inhumane to others and you point it out. Um I don't like it either. When will it stop I've 90% given up hope. I concentrate 100% on my family.

What else can one do?