The Duffy Trial: The PMO Cover-Up Begins to Unravel 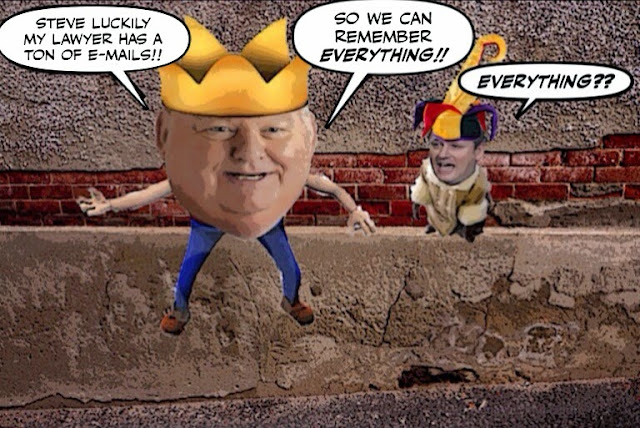 We've waited a long time to find out what role Stephen Harper's PMO played in the Mike Duffy scandal.

And now we're finally starting to find out.

They arranged for an outside audit to try to keep Ol' Duff quiet.

And then proceeded to whitewash it.

The newly released documents reinforce the notion the PMO and the Conservative Party initially went to great lengths to contain the political damage flowing from expenses claimed by Mr. Duffy after his 2008 appointment to the Senate.

This will be hard to explain:

According to the RCMP, a number of Conservative senators and PMO officials secretly discussed the confidential Deloitte audit when it was nearing completion on May 7, 2013. The following day, Mr. Tkachuk and his Conservative colleague, Carolyn Stewart Olsen, managed to delete key passages of the report by bypassing the normal Senate committee process.

And when those PMO officials are asked under oath to describe what what was going on at that time, I suspect it be even harder to claim that Stephen Harper knew NOTHING.

Gosh.This story is getting more interesting by the day. 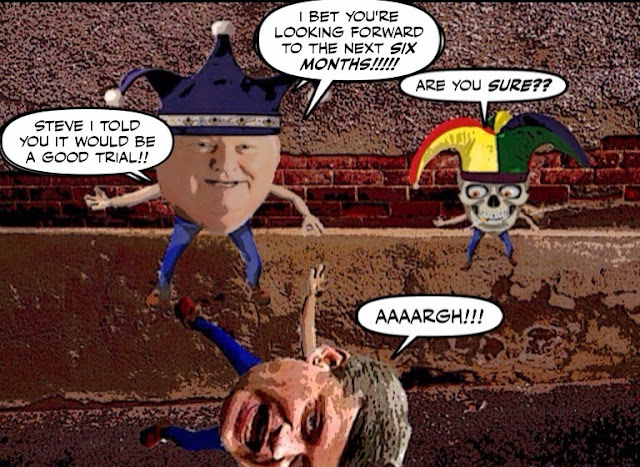 the news last night seemed to indicate there was some sort of "secret" and the cons didn't want the trial or anyone else to know what that was about. Now for a party which came to office declaring they were all about openness, you'd think they would be more than happy to share. They kept harping about the Liberals and secrecy, now we have the Cons and a whole lot more secrecy. Its time for Steve and open the books in audits so all Canadians can decide for themselves whether Steve and his cons ran an honest government or just the same old cover up, insider deals, etc. WHAT IS STEVE HIDDING?

Ralph Goodale: "The prime minister claims he knew nothing, saw nothing, was told nothing, asked nothing and did nothing as a grotesque 'deception' (as he called it) was pulled off right under his nose by his most trusted confidantes."

With the Rachel Notley landslide in Albertastan;
The release on bail of Omar Khadr,
And the Duffygate revalations;
Stephen Harper must be sucking on his security blanket after taking his anti depressants - all the while worrying if IMPEACHMENT figures in his precedent breaking parliamentary career.
I see light at the end of the dark con tunnel Simon - a faint glimmer of hope for Canada after "The Dark Harper Years".
Someone said Canada had to have conservatives in power every now and then to build up an immunity to them.
Just like the mumps!
This bout has been really bad.
I think we are going to pull through, Simon.
I am starting to feel better about being Canadian.
Now if we can only stop the bombing which is definately not Canadian.

I'm not so sure Steve is hiding with his blanket. Remember Steve is a member of the Christian and Missionary alliance church which believes the bible is "inerrant" and the second coming is "imminent". he's just praying and thinking god will deliver him once again. who knows she might because, we know Canadians have voted for him more than one time.

Gawdamn I love it Simon! Surely one of Harpo's "close confidantes" will crack under Bayne's relentless questioning and Harper will have to resign in disgrace, his legacy cemented forever. Besides, there is just no more room left under Harpo's bus of shame and misfortune.
JD

That's a possibility. But harper is a vapid man, with little depth, and therefore little faith. It's possible he's so full of fear and spite that he can hardly remember the words to his prayers! (Tee-hee.)

hi e.a.f...it was inevitable once the e-mails were sequestered that the truth would emerge. Nobody who knows how the PMO runs things could ever imagine that they didn't orchestrate the whole scandal. Or that considering the mobster-like way that Harper bosses them around that he knew nothing. Whether that can be proved I don't know, but every move that brings that scandal closer to him can only do him more damage. And remember the best is still to come...

hi ninofan.... it is a perfect storm isn't it? And like you I'm feeling a lot better about our chances of defeating him. He has been on a lucky streak for a while, but I think his luck just ran out. And he is providing us with more ammunition for attack ads than we can possibly handle. He is fighting the desire for change that has brought down one Prime Minister after the other. It was always going to be hard to hard to freshen up his act, and now events are conspiring. That rotten apple is just about ready to fall of the tree...

hi e.a.f... I'm not sure Harper is a real Christian fanatic. He has a fundamentalist mindset but the man is too much of a blatant liar, and a man of low morality, to be considered a real Christian. I ascribe most of his problems to a severe personality disorder, combined with the instincts of a natural born bully...

hi JD...yes I'm enjoying it too, and I am extremely impressed with Bayne. Duffy may be a loser but he sure chose the right lawyer. By the time this trial is over the Cons are going to be running around like ants, diminished and ready to be squished... ;)

WHAT IS STEVE HIDDING?
Well have a look in his closet. Other than himself (way at the back) , there is probably a herd of elephants, thousands of suppressed climate science reports, possibly a few gagged climate scientists, the real reason the budget is balanced (on a knife edge) and the secret of his hairspray/cement mix.

And that's only the first level. One would need an archeologist to find everything.