Will the Con's Porky Behaviour Cost Them the Next Election? 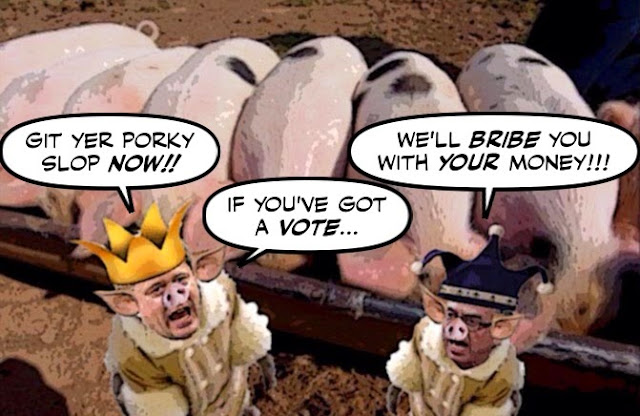 As you probably know Stephen Harper's Cons have been in a feverish, grunting frenzy recently.

Running wildly all over the country,  spewing our tax dollars out of every orifice, in a blatant attempt to bribe voters, and try to buy the next election.

But although Canadians have seen this disgusting spectacle before, in the lead-up to an election it looks even worse.

And as John Ivison points out, this porky act just might cost Stephen Harper the next election.

If hogs could vote, the man with the slop bucket would be elected swineherd every time, no matter how much slaughtering he did on the side, quipped American novelist, Orson Scott Card.

I’m not so sure. Voters are not pigs, and at some point they abandon politicians they feel are in it for themselves, no matter how much slop comes their way.

My sense is the Harper Conservatives are getting perilously close to irritating people who have been prepared to overlook previous excesses.

Because it is such an obvious scam.

And such a massive one... 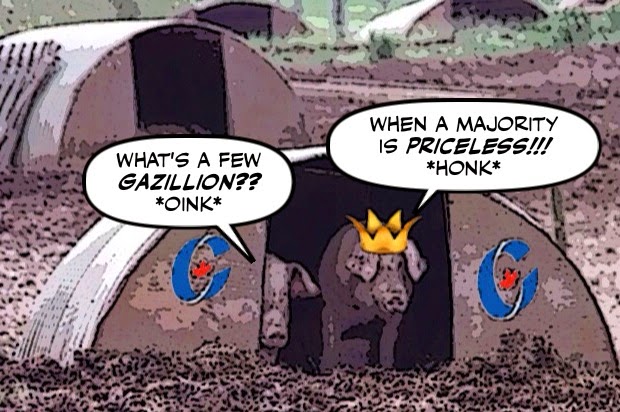 And the stinkiest scam of them all is Stephen Harper's decision to use Canada's 150th birthday party in 2017, to hand out even more pork.

Reports have emerged about the “Canada 150” infrastructure fund being gerrymandered so that the Conservatives can make multiple announcements during the election campaign. The $150 million fund for Canada’s 150th birthday celebrations is open to up to 1,800 proposals but the deadline for expressions of interest is the end of May, even though the program was only launched last Friday by Stephen Harper.

Because it seems one birthday party wasn't enough... 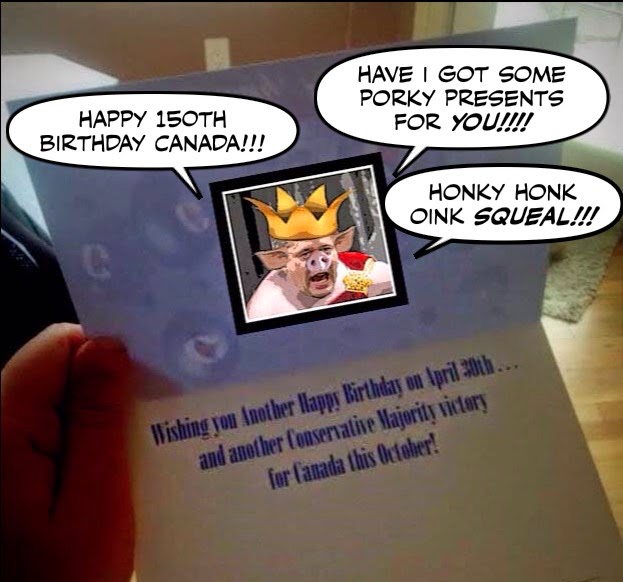 And he'll do ANYTHING to try to win another majority.

But the bad news for Stephen Harper is that by now most Canadians know that. His never-ending porky ads, that bombarded them during the playoffs, have started to irritate them.

They're not impressed by his propaganda channel, or by Pierre Poilievre's vanity videos...

And the stench of scandal coming from the Duffy trial is only adding to the general feeling that the Cons are corrupt and can't be trusted.

So Ivison may be right. Instead of helping them, it might actually end up costing them  the next election.

Old-fashioned governing party hubris has always been the Harperites potential downfall. He got away with it in 2008, and again in 2011, largely because of the lack of credible alternatives.

But 2015 is shaping up to be a different story. If voters perceive Harper is putting his party’s interests ahead of theirs, they may decide it’s time to clean out the political pigsty.

Which as I'm sure you can imagine, would be the absolutely PERFECT ending for me eh?

Oh sure, I wouldn't mind seeing them being charged like Con artists, and sent to prison for their many crimes against Canada, or just plain old FRAUD.

But the sight of them running from the sausage factory of history would be even more enjoyable... 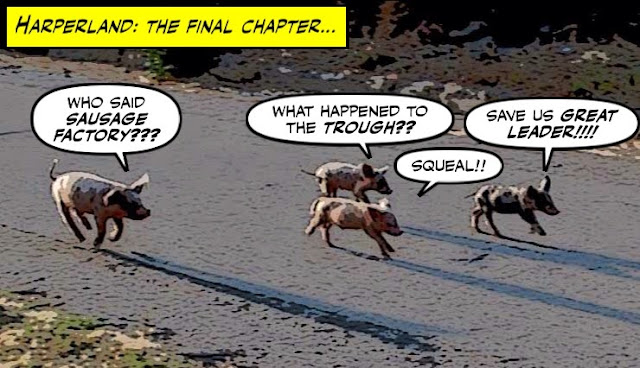 For as I have always portrayed them they are hogs.

They have soiled themselves and this country,

And it will not be fit for decent people to live in.

Until we have cleaned out that pigsty...

It worked out fine for MP Gazebo Tony Clement. Even with the odious sale of the Deerhurst after it got a multimiliondoallar taxpayer facelift.

Unfortunately polls still suggest many Canadians are not aware of the larger picture. Like enthusiastic adolescences the provincial governments have stepped into the vacuum created by the federal government over the past years. They partied hard and tried new experiences but now its time to pay up and people are angry at the mess they have created. They view uncle Steve and auntie Justine as generous relatives to have around at Christmas and on birthdays but of little consequence the rest of the time. Harper is happy to play the role of the generous but eccentric uncle as he continues to transform the Federal government into a system capable of controlling the oil rich super state that was once Canada. True to his beliefs in mankind the model he is following is not that of Norway but that of Russia ( a major competitor ) and the Saudis ( currently an ally because of Israel ). Given another 5 years in power uncle Steve will be back to claim the parts of Canada he needs and with the muscle to shape it the way he wants.
Awareness is growing but the average Canadian is so wrapped up at the provincial level to realize that the lack of leadership and supprort at the federal level has significantly contributed to those problems.

definition of a psychopath Harper meets those traits
Professor Robert Hare is a criminal psychologist, and the creator of the PCL-R, a psychological assessment used to determine whether someone is a psychopath. For decades, he has studied people with psychopathy, and worked with them, in prisons and elsewhere. “It stuns me, as much as it did when I started 40 years ago, that it is possible to have people who are so emotionally disconnected that they can function as if other people are objects to be manipulated and destroyed without any concern,” he says. (from Irene)

anon 10:55 Pm
Be careful with your words or what you wish for., they may come back to you slap you in the face. I know Simon is an NDP and that's fine. I respect that. I also know that he despises Harper as much as we all do but I think he has respect for the other parties as they might get this dictator out of the PMO but I also know that he wants Harper out as much as we do. Your arguments against Trudeau are un founded and your simply reading into too many NDP sites and all that BS flowing from your buddies'.sites. Wait until the debate and Mr Trudeaus platform before you make up your mind. Problem is that the NDP have been premiers in many provinces including mine and they did nothing for the provinces unless you were a union member. so why would we expect any difference from NDP Mulcair? Politics can be really good but it can also drive you right out of your mind. Sorry if I am being blunt but until you get to meet all the candidates in the debates. I would simply sit back and relax. What will be will be. All of Canada will be making their decision's on who they will vote for and they will all have their reasons. But facts are facts, there's no way around that Good night ,Irene

hi Steve...yeah but times have changed, the Cons have such a record of sleazy activity, that it's now like a snowball rolling down a mountain. It gets bigger all the time and it will bury them...

hi anon...I completely agree with you, the failure to see the big picture is our worst enemy. It is hard to see the big picture in a big country like this one. But it's no good lamenting that unfortunate fact. What the parties should be doing is making that big picture clearer, instead of just focusing on one Con scandal after the other. And we can help by trying to create some kind of movement, because nothing can focus things better than a movement dedicated to the restoration of Canada...

hi anon....yes he clearly is a clinical psychopath. I don't mean that as an insult, it seems obvious, and of course he is not alone. Our society encourages psychopathic values and many of them are very successful. But Harper unfortunately also has very bizarre ideas and way too much power, and that makes him dangerous...

hi anon...I do respect all progressives on this blog, I want to bring them together to fight the Cons. It'll probably take a progressive coalition to topple Harper, so the sooner everyone starts at least being civil to each other the better...

Type crowdfunding stop Harper into your search engine. Its good to see the number of people/organizations that are reading the same book but over different pages. The movement has yet to coalesce, the chicken dance may be just what we need. We will know its over when and if the older federalist part of the conservative party finally decide this is crazy we need to speak up. Some are likely working in the background trying for a soft landing but unfortunately there is no such thing.

Numerous studies done recently have all shown that there are statistically significant higher rates of psychopathy in CEOs and politicians.

Harper is a textbook case.

Hi anon 10:55 PM I disagree The NDP was much better than the current goon squad called 'the liberals' in BC that are nothing more than an illegitimate child of the federal CPC party. They hang under Steve's well you know what figure it on your own. Justin is a spoiled rich brat Liz can't get enough votes Tom is our only hope.