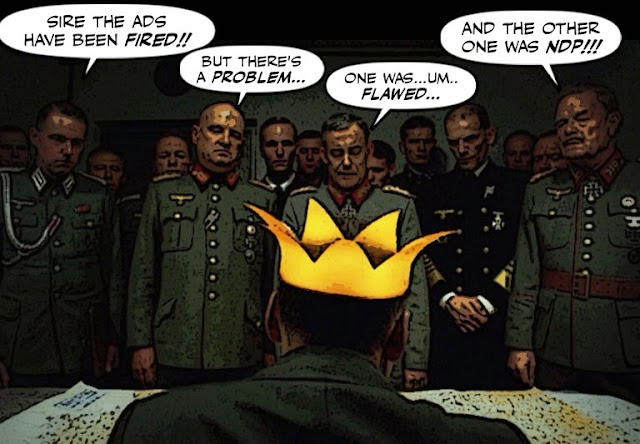 As I've been telling you for a while, Stephen Harper's PMO is not the mighty Death Machine it once was.

These days it's looking desperate and disorganized. Its election campaign is veering wildly in all directions. It's making a lot of dumb mistakes.

And there couldn't be a better example of that than what happened yesterday. When the fanatics in the PMO launched two new attack ads.

Only to have them go horribly wrong.

For first there was this totally staged propaganda performance or Con pantomime...

Which apart from the laughable claim that Harper is not bound by ideology, also contained this ghastly gaffe.

Nestled amid the opening montage of the Conservative Party's latest salvo in the pre-campaign ad wars is a shot of what appears to be the Chevrolet Camaro assembly line at General Motors' Oshawa plant.

It's an unusual choice of visuals, given the recent news about that particular production line, which is slated to move to Michigan later this year.

Which would be hilarious eh? Except for the 1,000 workers who are going to lose their jobs, like so many others have all over this country.

But did serve to remind Canadians that Stephen Harper is no Great Economist Leader... 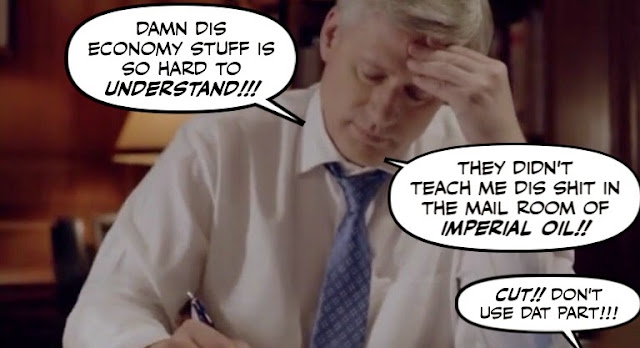 And then there was this ad aimed at Justin Trudeau...

Which in addition to showing how much the Cons have had to soften their attack ads on Trudeau, because the scummy old ones didn't work.

Turns out to be a blatant ripoff of an old, wait for it, NDP ad.

And to make matters worse, if the latest polls are to be believed, was also aimed at the wrong leader... 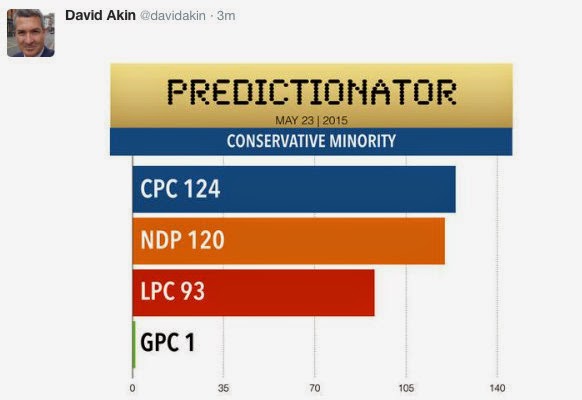 Which tells you what a mess the PMO is in.

But the important thing is that both those Con gaffes were quickly publicized all over the internet by progressives on social media. Which both diminished their impact, and made the Cons look ridiculous.

And it clearly shows what an important role our social media, which is much larger and more creative than those of Con supporters, will play in the next election.

But of course the Cons do have more money than we do, and they will try to bury us under an avalanche of attack ads, with the biggest and no doubt most lying propaganda campaign this country has ever seen.

So it will be vitally important that we use people power to boost or amplify the message of our social media. And one way we can do that is by joining the Amplify Network. 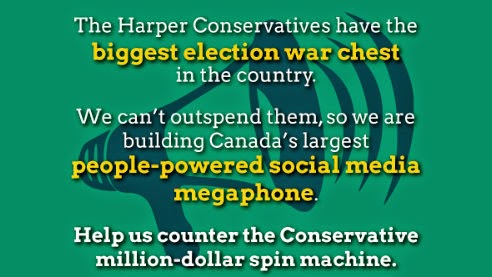 Here’s how it works: during key campaign moments we’ll send you an action alert through email asking you to share something on social media. This could be a tweet targeted at a politician with a hard-hitting question, an informative video to share on Facebook, or a compelling image encouraging people to vote.

Because it is a really good idea, and for very little effort we could reap a huge reward.

By working together, we can reach millions of people across the country and encourage them to join us in moving Canada forward for an open democracy, a fair economy and a safe climate. All it takes is for us to share our messages, values and actions as one voice.

And the best news? Isn't it great that we already have this mighty weapon to use against the foul Cons and their depraved leader? And that we can all help make it even more powerful.

First we will diminish him and degrade him... 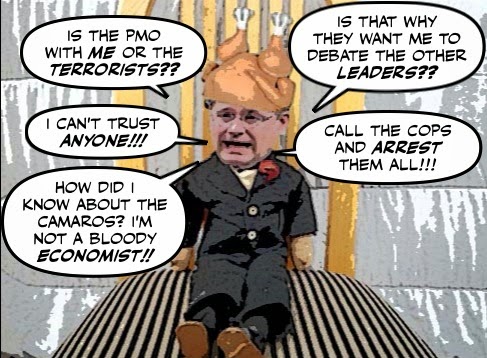 Or help drive him crazy, or crazier.

Then we will defeat him.

And then we'll treat ourselves to one of the most beautiful sights we've ever seen.

Stephen Harper turning out the lights, for the very last time... 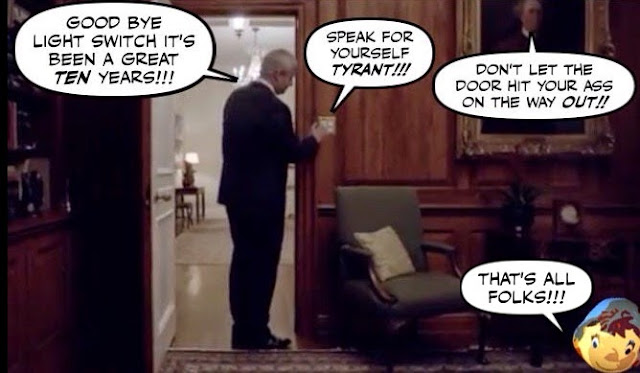 Yes, Social Media will play a much bigger part this time around.........Canadians are paying more attention because of this. Getting more interesting by the day!

Under con leadership Canada has entered a time warp that propelled it back to the 60's. Harper is trying to do damage control on his cold war inspired foreign policies by cancelling all international travel for his Cons until the election is over. He is really afraid that they will babble to the international media about their archaic policies on climate change, Russian isolation (while Kerry recently spent a day with Putin talking cooperation), and how certain boycotts can be considered hate crimes in Canada. The list goes on.
Another 60's classic is the ad that shows Harper sitting in an isolated massive office carrying the weight of world on his shoulders. This is in stark contrast to modern successful companies where management is accessible to employees and customers in an open creative communication oriented environment. Perhaps this is the prime ministers office but it certainly should symbolize the democratic system.

Hopefully social media can overcome the Cons shills like "Con" Ivison. Did you notice him quoting his usual unnamed Cons sources about Closet Leader about to use the "nuclear" option of lowering HST? It has struck me that this guy has either willingly allowed himself to be used as the trial balloon for whatever the Cons want to float to test public reaction, or he himself is the source of the unfounded rumors. Remember the last one about Harper being ready to call an election in Spring? Even claimed he had more than one Cons source despite the fact that many had pointed out that that would have made little sense because it would have torpedoed the passage of Bill C-51. This unfortunately is what we are up against when we fight to heave Steve.

I think the Greens will get at least 10 seats, including Claire Martin (if she wins the nomination)

I think the Greens will get 5 to 10 seats, including Claire Martin (if she wins the North Van nomination)

That's hilarious and repulsive seeing the grim reaper Harper portrayed as such a wonderful human being. I'd love to do or see a parody of it where Stevie is hurling obscenities at people over the phone and in person and ending with him throwing a chair at the light on his way out. No worries Stevie, the electorate will turn your lights out for you this October.
JD

yes, it certainly is different than the Mayor of Calgary who always looks happy and open with citizens.!

The Greens getting 5 to 10 seats would be wonderful, especially if it came at the expense of the Cons and that is where it may come. Some Conservatives will never vote Liberal or NDP, but they may as a sign of protest vote Green. With enough protests, Elizabeth May and her party would become "players". it would do us all good to pay some attention to the message of the Greens.

I think Lead Now, Shd.ca, Council of Canadians, Operation Maple et al. should collectively hire a Harper impersonator. For every Con TV ad that comes out featuring Harper, writers could come up with dialogue for the Harper impersonator and satirize it.