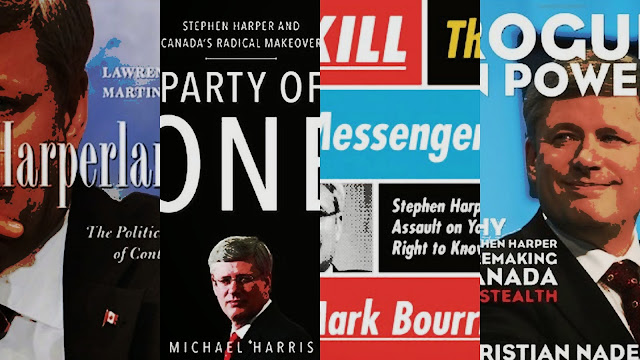 There are a number of good books out there that document the horror of what Stephen Harper and his monstrous regime have done to Canada.

And now from a distinguished Canadian who has spent a lifetime standing up for this country and its values, comes another good book.

And another wake-up call for our battered and bleeding democracy. 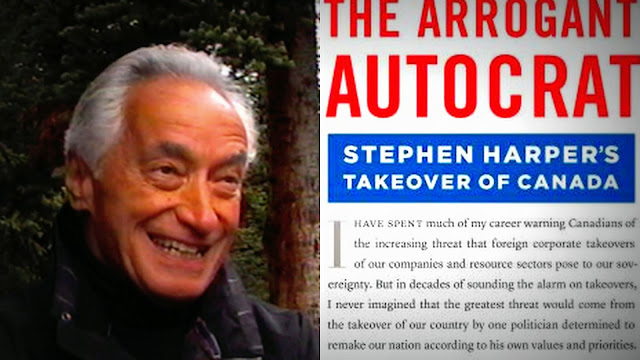 Mel Hurtig, one of Canada’s most-celebrated economic nationalists, has fought the good fight for this country for more than 60 years.

Now, at an age when most of his contemporaries have either withdrawn to the political sidelines or died, Hurtig, 82, is still going strong. To prove it, he has just released his eighth book, which he calls the most important one he has ever written.

Titled The Arrogant Autocrat: Stephen Harper’s Takeover of Canada, the book takes direct aim at Harper’s actions since becoming prime minister in 2006 that are systematically and deliberately in Hurtig’s view destroying our democratic institutions and values.

Isn't that great? Mel Hurtig is riding to battle again. And I can't wait to get the book. Not because I am not painfully aware of the atrocities Harper and his Con thugs have inflicted on our Canada.

But because I admire that old man so much. For the way he fought to try to keep foreign companies from taking over this country, or the way he tried to protect our culture from being swallowed up by the one of our giant neighbour. For the way he promoted our artists.

His book The Vanishing Country has always struck me as tragically prophetic. For look at us now.

Like him, I shudder to think what might happen to our Canada if Stephen Harper is re-elected... 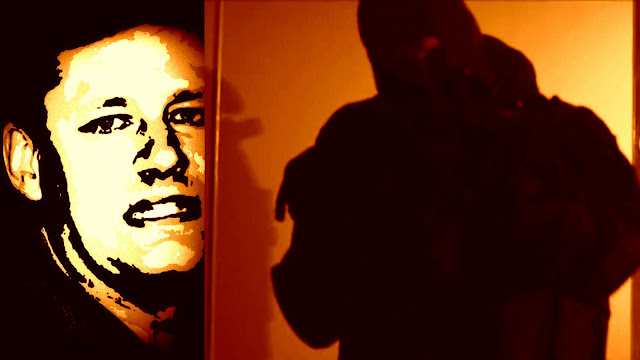 “My major purpose in writing the book was to reveal the extent to which Harper has damaged our democracy,” Hurtig said in an interview from his home in Vancouver. Harper “doesn’t understand what democracy is all about or care about it,” he added, saying he is “terrified by the idea that the man could be re-elected.”

Like him I'm also a strong supporter of a progressive coalition:

As Hurtig sees it, the only way to stop Harper is for the Liberals and NDP to form a coalition “for the sake of restoring our democracy and indeed, our civil society” if there is a minority Conservative government after the Oct. 19 federal election.

Most of the information has been published elsewhere over the years. What Hurtig has done, though, is package it all in a short, 140-page book that is easy to read and understand.

Because it sounds like just the kind of book we can lend to people we know who don't follow politics as closely as we do, especially seniors who support the Cons.

For they will remember Mel, and the Canada he tried so hard to defend... 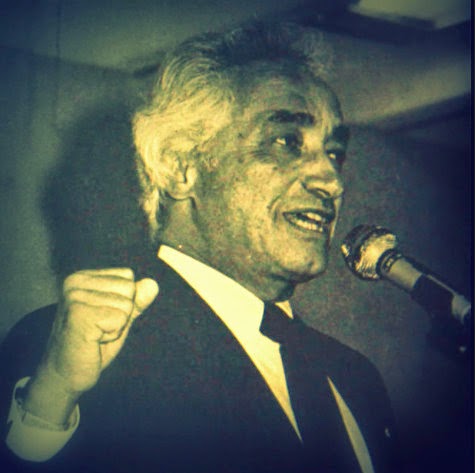 Remember that although so few listened to him at the time, or heeded his warnings, in the end he was right about EVERYTHING.

As for the rest of us, we should be inspired by the sight of an 82-year-old man still fighting for his country and its values. And comforted by the knowledge that so many great Canadians are on our side.

Let's do Mel Hurtig's book justice. Let's share it widely. Let's give him in the twilight years of his amazing life the reward he so justly deserves.

By taking our Canada back.

And driving this depraved arrogant autocrat from power, as soon as is humanly possible... 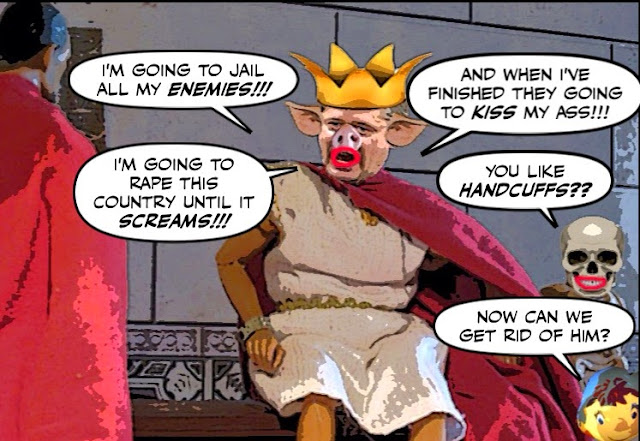 Even though I'm acutely aware of what Harper has done to turn this great country into his sick, twisted vision, I will be buying this book and sharing it with those who just don't pay attention to what he's done. If Mel wants to get his book out en masse, he should offer it online to anyone. Do it on a donation based system to cover the costs as I'm sure he's not in it for the money.
JD

Coalition Government is definitely the way to defeat harpie and his crime cabal....
As long as Mulcair is on top. trudy has stated a lot of times he won't allow a coalition and the libs have supported heil harper way too many times to ever be trusted in the driver's seat.
Mulcair is nowhere near perfect but at least he had the guts to openly oppose C51 and he's a lot smarter than trudy. Your daddy's name and a lot of cute photo ops do not an appropriate leader make.
J.D.-- Excellent idea about the Mel Hurtig book. People have GOT to start realizing what has happened and what can still happen if heil harper is re-"elected". Good idea to get it into heavier circulation if Hurtig is okay with that.

Thx Simon. I will be orrdering the book today. You can't know enough about this demogogue.

More and more are people speaking out against Harper. You can't put lipstick on a pig.

well those of us who can afford it could go out and purchase a number of copies of the book and hand them out on 1 July, as a Canada present to those we know. Perhaps some one could convince local papers to print sections of the book, serialize it, with the author's permission.

The MSM isn't going to put the information out there. They are corporations who have benefited from Steve and his brunch of Cons.

A B.C. Blogger, Gangsters Out, is writing how the Hell's Angels are moving into the docks in Port Vancouver. where is the great crime fighter, Steve, now? Not to be seen anywhere, except in Europe doing his impersonation of a "warrior", fat gut and bad make up and all. It would be nice to have Port police, but I do recall them being disbanded. Must have worked for someone.

In B.C. Christy Clark and her lieberas were so fond of saying families first, families first, and we're open for business. some of us just didn't know it would be crime families and crime business. Welcome to the world of harpero and his cons. I'm sure the H.A. can get away with what they want, because Steve's cons look like an H.A chapter, given how many have been convicted, charged, in jail, and being investigated. Nice to see we live in such a democratic country. At this rate perhaps some day the E.U. will invade us to free us, from tyranny.

Simon, I remember Mel and his National Party. I admired him so much that I donated and even canvassed an area of Edmonton for that cause - which is a concept of Canada I think we share.
I am bitterly disappointed in the Liberal support of C51. Of course with Rachel Notley's win in Alberta I am cautiously optimistic that My Canada can be saved and even improved.
Think about Medicare which is top priority in most surveys of Canadians.
Without a universal drug plan Canadian Medicare is a cripple. People who cannot afford their prescriptions clog emergency rooms along with seniors awaiting long term care.
This is not Socialism , it is pragmatism and the application of basic christian or muslim or humanist values. Which is what Canada used to be about until the corporatists gained power and made corporations into super individuals - who don't need healthcare but lots of government handouts in order to create "jobs" of dubious value.

hinofan they call Edmonton a real Canadian city and Calgary? An American outpost as a matter of fact the largest American city outside of the USA. I know I was there when the Americans took it over. Now the Notley crue has given them a well deserved black eye. Oh boo hoo cheers for all Canadians.

I hope you enjoyed your weekend! ;)

I must of been at the same meetings with Mel as you - -- Mel's incite into what was going wrong with our democracy was bang on !! -- he knew we getting slowly screwed by the USA and the 1 sided trade deal for example....BUT nobody listened -- Let's start spreading the word--- no more harper and no more religious nuts running the best country in the world ever again...

hi JD....that's a good idea. When I got a copy of Michael Harris' book I xeroxed some individual chapters or sections, and handed them out at work or to other people I know. We have a massive education job to accomplish in the next few months, and we should use every method possible to get our message out...

hi anon...At this point to be honest I wouldn't care who ended up on top, because each would have to help the other if the coalition was to survive. The only thing I care about is defeating the Con regime...

hi hinofan...yes priper medicare can't work without proper drug plans, and I should add denticare should also be part of it, since bad teeth can cause serious medical problems. A decent society should decide what its priorities are and put health before guns. I don't know if you have been following what the Cameron Cons are doing to the NHS in Britain, but it couldn't be more tragic or more criminal....

hi e.a.f....well I can't afford to buy more than one copy of the book, but I do have free access to a xerox machine, so I can run off individual chapters and help get Mel's message out that way....

JT does support C51 but not in that concept by Harper. He has said that several times but no one is listening.I really wish you people would check out your facts before making those accusations so freely. It appears Simon that your blog is being taken over by the NDP which I know your are but....and in my opinion, Mulcair is a carbon copy of Harper and I will not be supporting him. Doing so is like supporting another Harper wanna .be. be.