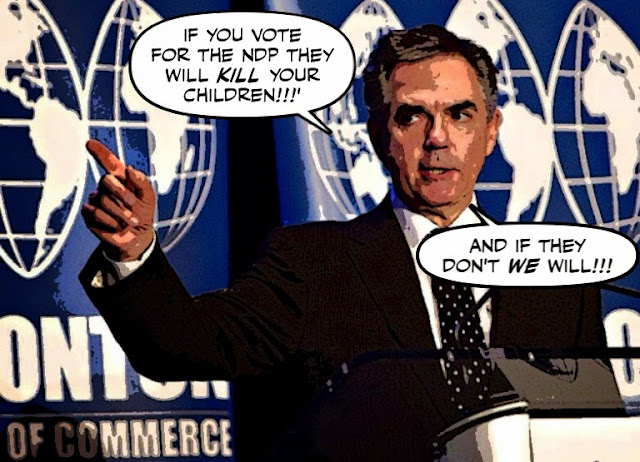 With just two days to go before the Alberta election the excitement is mounting, and so is the fear campaign.

With Jim Prentice and his Big Business posse trying to scare the people of that province into voting for them and not the NDP.

And today it was Big Oil's turn to try to rescue the crumbling Con dynasty, and threaten Albertans.

Cenovus CEO Brian Ferguson was the first to weigh in on Alberta's election campaign, pouring cold water on an NDP pledge to review the province's energy royalty system.

"I don't think there's any room for any increase in royalties," Ferguson told Bloomberg News. "If there are changes that make the structure uncompetitive, that will be negative for investment in Alberta."

Claim pathetically that Big Oil is too poor to pay more than the peanuts they pay now.

And remind everyone who really runs that province.

There was outrage from industry when former PC premier Ed Stelmach reviewed, then increased, royalty rates in 2007 after becoming premier. He caved to industry and reversed the change in 2010.

With the help of people like Jim Prentice, and this sorry stooge... 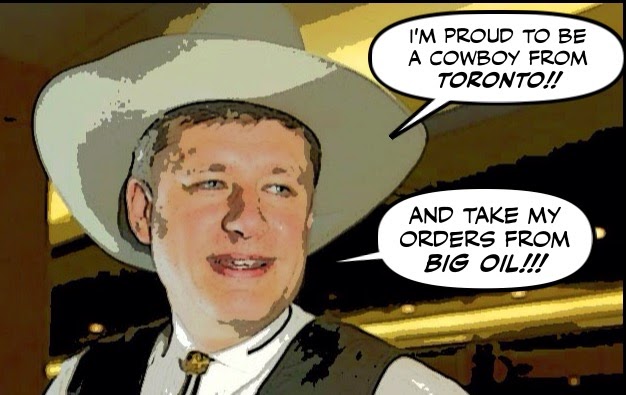 But even that crass intervention wasn't as bad as the one I told you about yesterday.

When a group of businessmen in Edmonton said if the NDP dares raise corporate taxes by TWO percent, the sick children at the Stollery Children's Hospital will suffer. 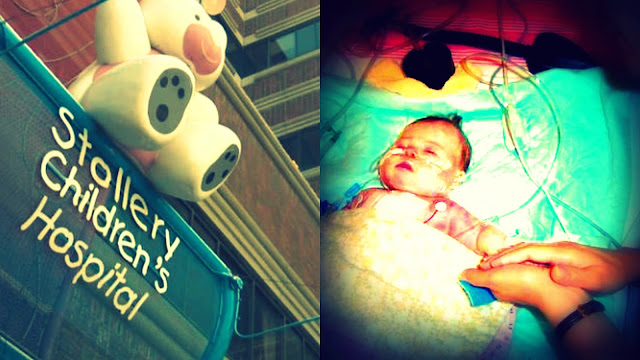 "If there's no bottom line, then there's no money that goes to charities. We won't make donations to charities," Mawji said, using the Stollery Children's Hospital and the University of Alberta as examples of where the losses will be felt.

Which is such a low threat it couldn't be more disgusting. And made me so red-hot angry my buddy Seb had to fan me with a magazine.

So you can imagine how happy I was to see this story today.

Albertans have taken to Twitter in droves to support the Stollery Children’s Hospital after a controversial comment was made by a local business leader on Friday.

The comment also led to an outpouring of support for the Stollery, with several people using the hashtag #ABSupportsStollery to show pictures of their donation amounts. 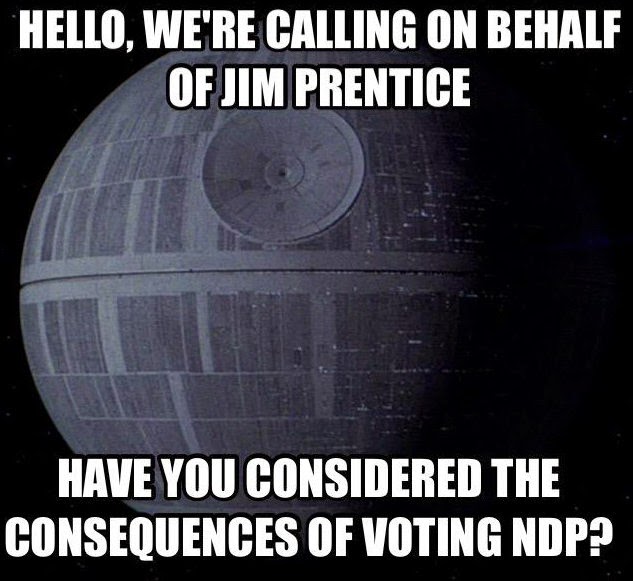 And take that Jim Prentice... 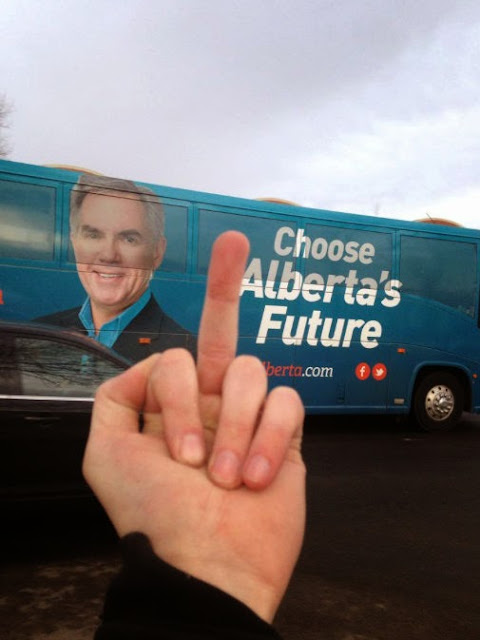 You know I have no idea what's going to happen on election day, and I have been too hardened by my long struggle against the Cons, and disappointed too often, to dare to raise my hopes.

But all I can say is that province has never looked better to me, or more Canadian.

And I LOVE it. 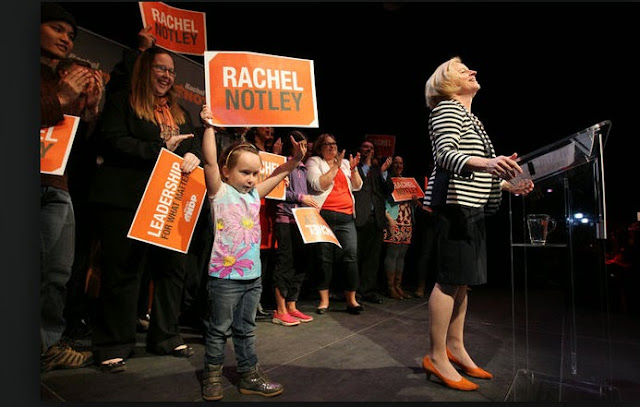 YES those business men must be very afraid, after all those years of donating to the Alberta Cons, and getting all those contracts, gee to see that disappear must be truly frightening.

new government, they might go with a new policy, you know, contracts to those who can provide the best bang for the buck, not to the best friend of the government. oh, be afraid, very afraid.

for the average taxpayer, an NDP government won't be frightening. they have everything to gain and nothing to loose, because really the Alberta Cons already lost all the money. Just think a government who might be interested in health care, education, children instead of foreign oil companies. Interests of people first, interests of oil companies second. my god, what a concept. how revolutionary. A balanced budget!

In BC, people are warned about the bad old 1990's when the BC NDP was Government. That was supposedly BC's 'lost decade', when people lived in cardboard boxes and ate dirt. How we survived I don't know.

Hats off to the Albertans who stood up to these corporate douchebags. Their threats are beneath contempt and shows the parasitic fear-mongering tendencies they share with the Cons. Their greed is insatiable and now their biggest fear is not having a Con Klown like Prentice to tell what to do. Well, as blowhard MP Larry Miller once said, if you don't like it, leave.
JD

We were told one time by a person who had worked for public works Alberta for years how when the Edmonton-Calgary highway was built materials were tested in government labs to make sure the best was used. This was a Lougheed government.

But when he was no longer premier and everything was contracted out the attitude was 'if it falls apart we will redo it in three of four years'.

The fear mongering is back firing! Yahoooooooooooooooooo! I hope it extends all the way across the Atlantic Ocean to the U.K. on May 7th........Go, Rachel and Nicola, Go!

I don't know what will happen, but I see it the way I saw the 2011 results. Under late-capitalism, the centre cannot hold.

Decades of right-wing policies have visibly failed, especially in comparison with left-wing alternatives such as Norway's. Now the people of Alberta are being told they have to suffer cut-backs and tax increases, and there's no fund of oil money like there was supposed to be.

Same old story since the beginning of time - the landlords versus the serfs.

Texas has higher royalty rates than Alberta, suck on that Exxon.

Okay so you think I believe this shit? The NDP was supposed to take a landslide victory in the last BC election according to the polls. Ya think Alberta is going to be any different? No way Jose eh . So now I am waiting count down two days until the Alberta election. I ain't put I pray the polls are correct and the PC's get thrown out of office in Alberta. That will give Harper the kick in the pants he needs! And he can go home to his mummies and daddies house in Toronto eh?

Texas has higher royalty rates? My god I didn't know that!

Somebody should tell them if they pay their fair share of taxes we won't need their charity.

We have that in Ontario too, with people too often saying "Remember Bob Rae!!!" when presented with a suggestion of voting NDP. "Ontarians have long memories!" they yell.

Well, no, no we don't, elsewise we'd remember that the NDP inherited a massive deficit from the outgoing Liberals during one of the worst recessions in provincial history. No party would have done well, but people voted in the NDP out of pure hope.

Like British Columbians, I have no idea how we survived that great NDP apocalypse, but I'm sure cannibalism factored in somewhere.

I was born in Alberta during the Social Credit era and was too young to remember them but the PC thieves I know all too well. Corrupt to the very core these bunglers (compare Alberta oil revenues to that of Norway and that will be clear to even the most rabid Prentice supporter) are about as corrupt as any banana republic. The big oil shills have done serious damage to this province. Environmentally the conservatives were still in the stone age. CO2 was not as high on my list of concerns as the poisons that are dumped into the rivers and injected into the ground water. It is much much worse that reported. I worked oil rigs and so did my father and we have seen it all with very little change from the 1940s till now. The royalties have been systematically pilfered and now are a bad joke leaving us with nothing but a fiscal mess.

Now Prentice and his cronies are on the run thanks to their own greed. Now we can begin the long and difficult task of auditing this nightmare the P.C. party have left us. No free rides for the tough on crime P.C.'s do the crime do the time.