The Monstrous Harper Cons and their New Albertastan 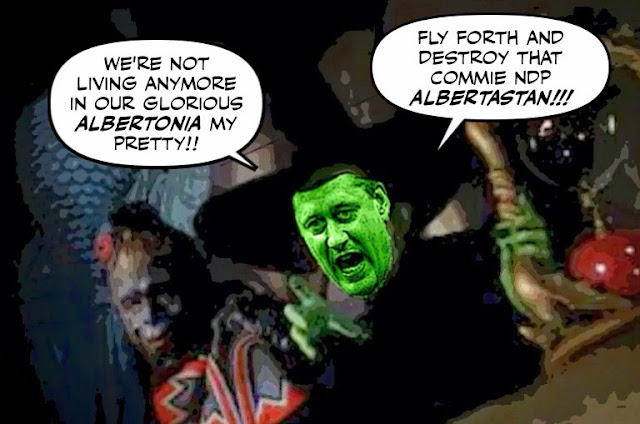 Holy flying monkey. What a difference a day makes. Up until yesterday Alberta was the Con's favourite province, their shiny Oily Oz.

But then came Rachel Notley as the new Dorothy, and painted it orange.

And now it's their despised Albertastan.

The normally message-managed Tory caucus emerged for the media's post-mortems Wednesday working through various stages of fear, denial, blame and regret. "It was more like a morgue. Someone said it was like — it's Albertastan now," said Justice Minister Peter MacKay.

And of course the good ol' boys from Big Oil are squealing like hogs, threatening the province with economic ruin. 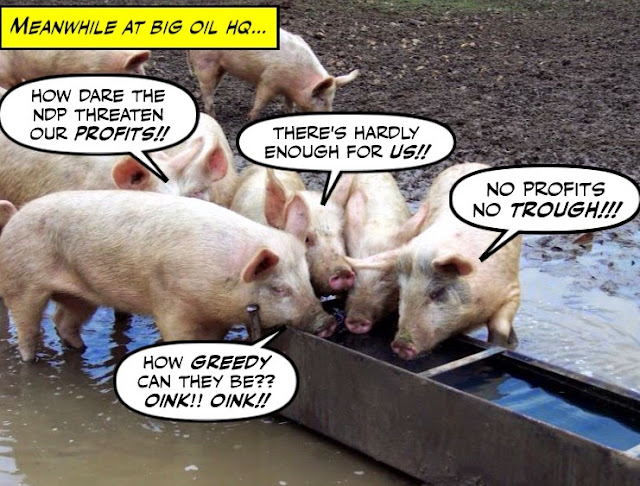 Like a reluctant bride forced to the altar, Calgary’s oil and gas industry on Wednesday insisted that the new NDP provincial government declare its intentions — and do it as quickly and as clearly as possible.

And trying to use the stock market as a blunt weapon to try to bludgeon the new government into submission.

On the morning after the election, energy stock prices dropped as financial investors released reports warning that the new government was far more likely than the previous Tory regime to enact regulatory changes that would hurt the industry.

As the Big Business thugs do whenever a progressive party is elected anywhere in the world.

But while it worked for them in places like Pinochet's Chile... 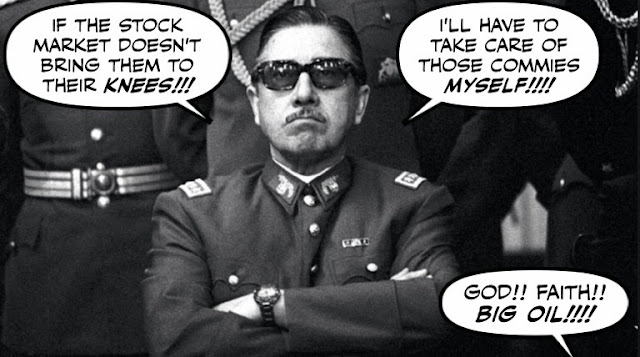 I doubt it will work in Alberta.

Because firstly, I don't think Albertans will be too impressed by the boys from Big Oil threatening their democratic choice, and threatening to walk off with the trough.

Or too pleased to see their beloved province called Albertastan by the Cons.

And secondly, as the Con's ghastly saint Margaret Thatcher once said: "this lady is not for turning."

And neither is this one... 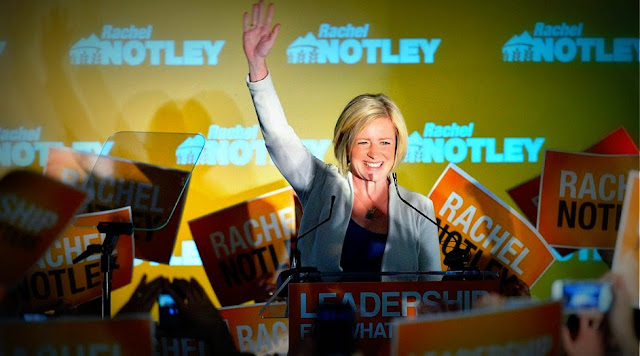 But of course, it's not really surprising the Harper Cons are feeling like rotting corpses in a morgue.

Because Rachel Notley's victory of hope over fear will hurt them.

The NDP’s majority victory in Alberta has reinforced the federal New Democrats’ claim that their party is ready for prime time nationally. At a minimum, the provincial election has exposed cracks in the walls of the country’s main Conservative fortress.

On Tuesday premier-designate Rachel Notley’s New Democrats won more than 20 ridings with a majority of the vote. Many of those seats were won with 60 per cent support or more. In another half a dozen ridings, the combined score of the NDP and the Liberals added up to more than 50 per cent. Based on those results, a sizeable contingent of Alberta voters does not come across as predisposed to support the federal Conservatives next fall.

Losing too many seats in what was once their base could be fatal for their chances of winning the next election.

And as a bonus, Justin Trudeau's tax plan is clipping the wings of Stephen Harper's flying monkeys.

At the same time, Trudeau is now challenging the Conservatives on their tax-cutting turf. Two days after he unveiled two platform planks — a tax-cut for middle-income earners and an enhanced child benefit retargeted to middle-class families — Conservative spin-doctors are still uncharacteristically struggling to come up with an effective response.

I don't think we'll be in Con Canada much longer.

The winds of change are blowing in our favour.

And slowly but surely the wicked dictator is melting... 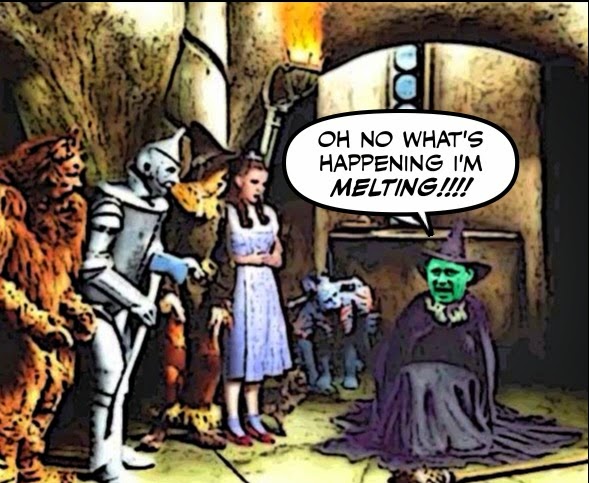 Knock Knock
Who's there?
Orange
Orange who?
Orange you glad you called an election?

I get your pig circus theme, but aren't those little pink piglets far too cute to be compared to the Cons?

Albertastan how dare Peter Mackay utter such a foul statement. I liken Alberta and the Harper-cons to Mexico and the Alamo.

The cons lost their last stand and now they want to burn Alberta down childish eh?

I say fuck them let's move along with no more foreign bombing campaigns quit the corporate welfare state and tax them like Norway and levy a 50% tax on the 1%. Then throw em in jail if they don't comply or have an offshore tax haven. Bring that money home to Canada. Also bring in legislation that forces Parliament to obey its own laws especially 'The Bank of Canada Act" I can't believe but it is true that since Trudeau the elder stopped borrowing from The Bank of Canada in 1974 we have paid private bankers over one trillion in interest alone. Plus we still have a debt of over $614,000,000,000.00 Steve has contributed to that debt the billions of dollars debt more than any other PM. How dare he say with a smirk on his face we have a 'balanced budget'? No Mr. Ugly we are in Hock... We owe big time and if you were really an Economist not a pretend one you would have addressed these troubling matters for Canadians. Oh but shit Steve you are also a pretend American Republican. Do us all a favor Steve move out of our country. Take your con clown gong show and so called 'Christian Alliance church' with you...

"And trying to use the stock market as a blunt weapon to try to bludgeon the new government into submission.

On the morning after the election, energy stock prices dropped as financial investors released reports warning that the new government was far more likely than the previous Tory regime to enact regulatory changes that would hurt the industry.

As the Big Business thugs do whenever a progressive party is elected anywhere in the world.

But while it worked for them in places like Pinochet's Chile..."

Overall very funny article. However this assertion is absurd. I sold put options on some Suncor shares when the price of oil went down, which means I have to purchase them if they fall to a certain level. The NDP win has made my Suncor position go down in value, but I see it as a renewed investing opportunity (I'm not buying Suncor, just selling puts). Oil prices are already on the slow march back up and these companies profits will go back up to pre-slump levels. No matter what the NDP does, they'll be making more than the last disastrous quarter. All good investors love when the trade they like gets cheaper. Especially when it's not for fundamental reasons, just political uncertainty. For solvent, liquid investors and companies alike, it is best for stocks to either be way under or way above it's real value. Low stock prices are good for a company which generates cash and has low debt. It increases the amount they can buy back.

And besides I think the NDP can be good thing for the Canadian Economy. Harper has not rewarded me as a shareholder of many Canadian stocks. The TSX is under performing many world indexes. The US stock market has fared much better, despite more challenges in 2009. Even they're GDP is higher than ours!

Too bad you can't edit comments.

What helped Notely win was she went with a "new kind" of candidate. They weren't your standard type of political candidate. It worked in Quebec also for the NDP.

Then again, the NDP in Alberta went with Gerry Scott as the campaign manager. The news did mention she had B.C. campaign workers but didn't mention Gerry Scott. Unfortunately, Dix did not use Gerry Scott in the last B.C. election and it cost him. Gerry Scott is one of the most successful B.C. N.D.P. Campaign chairs the NDP ever developed. Well more like he developed himself. He goes back to the 1970s and managed campaigns for people who wanted to become party leaders and he was very successful. he chaired Mike Harcourt's campaign to become mayor of vancovuer, then leader of the NDP, then the Premier of B.C.

Notley makes good choices, she started with her campaign manager and candidates.