Stephen Harper and the Desperate Days of Total Disaster 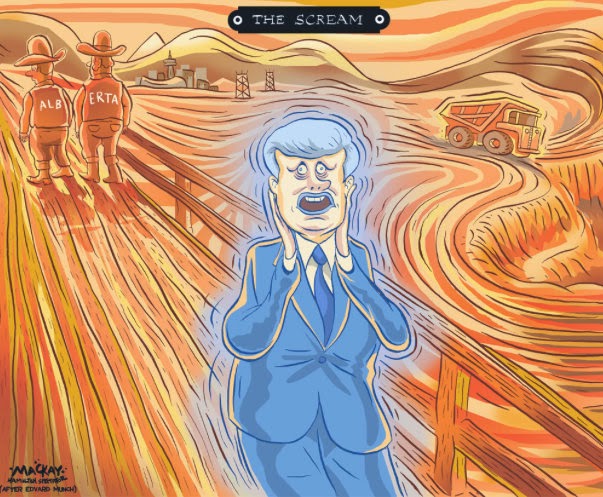 I have no idea where Stephen Harper is or what he's doing. He hasn't tweeted a word for 48 hours. His squawking Twitter site has suddenly gone silent

But I bet that cartoon is a pretty good representation of his state of mind.

Because he must be absolutely desperate.

After rolling along for months like Cinderella in her golden pumpkin, suddenly EVERYTHING is going wrong.

And he must be a REAL mess.

The NDP's victory in Alberta was bad enough, and must have left him in a state of shock.

Because he did want to be remembered as the Father of the New Alberta or Albertonia.... 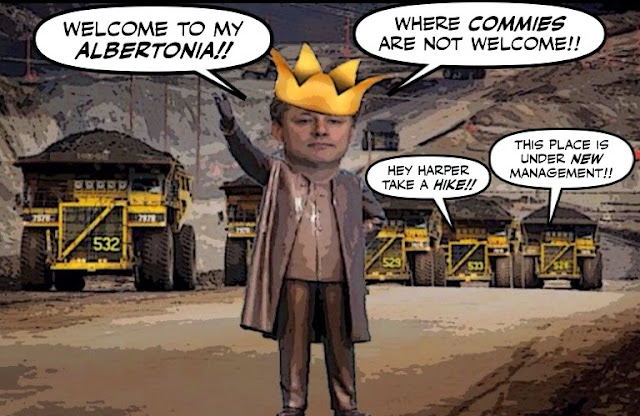 And the way that province is going progressive, he can forget about that now.

And start worrying about whether the same thing is going to happen to him... 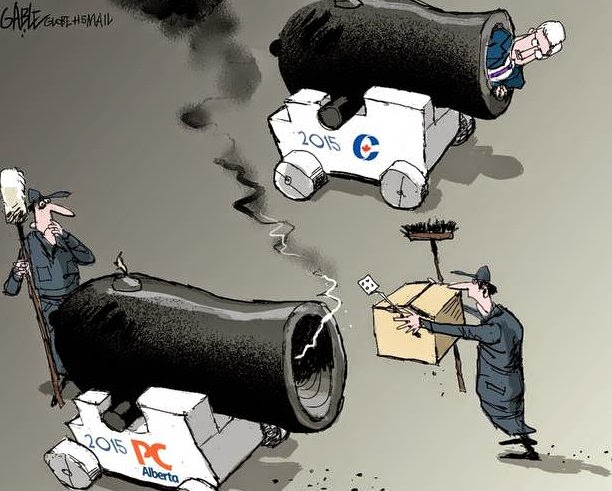 But that's not his only problem. In the last few days he has been hit by a perfect storm of political disasters.

First it was revealed that despite his desperate efforts to pose as one, he is in fact no Great Warrior Leader.

Just a grubby Con who would endanger the lives of our troops in Iraq, for the sake of a heroic cheap photo-op.... 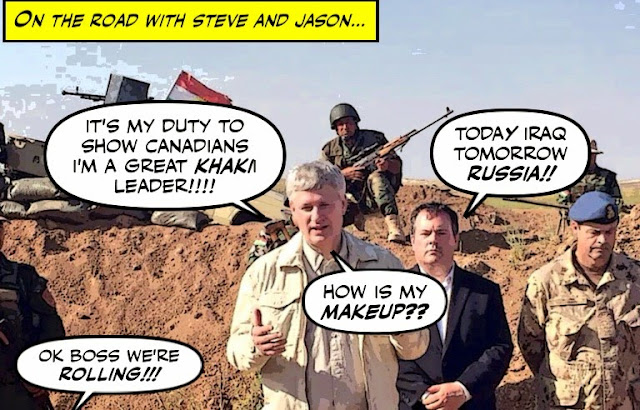 Whose PMO flunkies and propagandists were warned about violating operational security, but did it anyway.

Officials with the prime minister’s office got two separate briefings on operational security prior to Stephen Harper’s weekend trip to Kuwait and Iraq — and still published videos online that broke the rules by showing the faces of soldiers, the Star has learned.

And then LIED about it.

And contrary to claims, the two offending videos were never vetted by defence officials, who say they never would have let the videos see the light of day because they risked putting soldiers’ lives in danger, a defence official said Thursday.

Then there's the Mike Duffy trial where after weeks of plodding though the Senate marsh of corruption,

Ol' Duff suddenly turned up knocking at the door of the PMO... 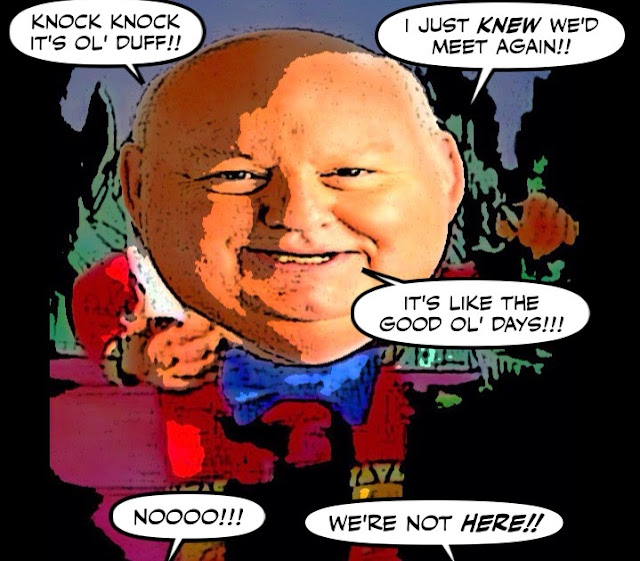 As his lawyer took the trial into the deadly swamp of political damage.

The Mike Duffy criminal trial shifted onto damaging political ground Thursday that now has the judge reviewing Duffy’s political value — and toxicity — to the Conservative Party of Canada and Prime Minister Stephen Harper.

By showing that the grubby fanatics in the PMO were so desperate to protect the reputation of their star fundraiser, they whitewashed an audit.

Based on two separate RCMP interviews with former Senate clerk Gary O’Brien and a Senate staffer Jill Anne Joseph, the documents suggest top officials in Stephen Harper’s office were behind changes made to a draft report of Deloitte’s audit into Duffy’s housing expenses. Under the direction of Tkachuk and Sen. Carolyn Stewart Olsen two damaging paragraphs were deleted, the interviews say.

And since Carolyn Stewart Olsen is Harper's closest political confidant, practically his political mother, it makes it even less likely that he knew NOTHING... 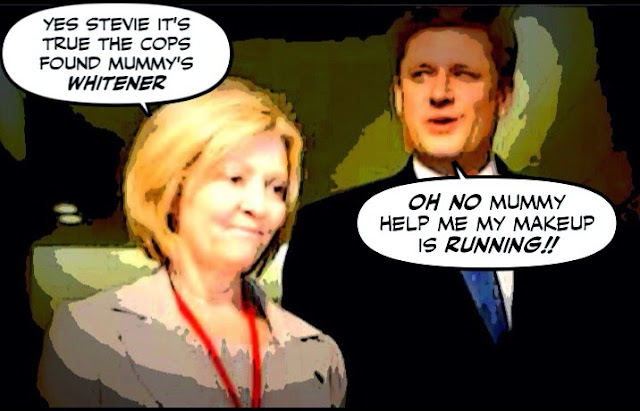 Then, as if that wasn't bad enough, the Cons were revealed to have balanced their budget on the backs of among others, veterans, the disabled, abused children, and unemployed young Canadians.

The biggest shortfall, $30 million, was for the government's touted Youth Employment Strategy, or about 17 per cent of the strategy's total budget for that year. The program is meant to help reduce the youth jobless rate of about 13 per cent.

Despite what their porky ads claimed...

And then yesterday evening, came another devastating blow.

When it was finally revealed for all Canadians to see, that Omar Khadr who Harper called a monster, was actually a really nice guy.

A relaxed and articulate Omar Khadr thanked the Canadian public, apologized for any pain he had caused, and asked on his first night of freedom that he be given a chance to prove himself. 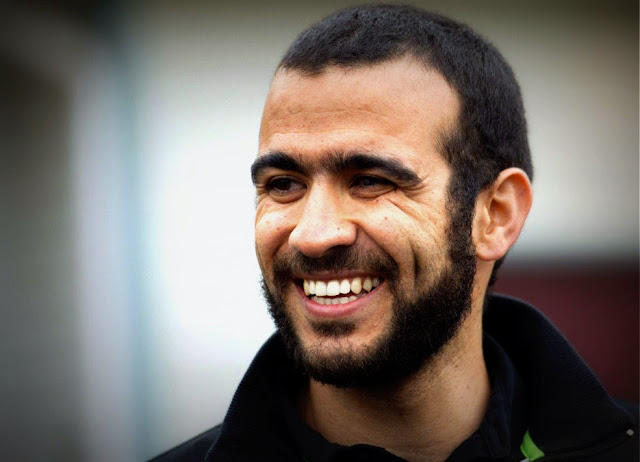 As I always told you he was. Better and more human than the sadistic pervert who tortured him for so long, for crass political purposes.

When asked if he had any comment for Prime Minister Stephen Harper, whose government has fought to keep Khadr detained, he replied: “I’m going to have to disappoint him. I’m not the person he thinks I am.”

Which can only raise the disturbing question: if Omar Khadr is a nice guy, what does that say about Great Ugly Leader? And who is the REAL monster?

And you know what I think?

Stephen Harper is the most depraved political pervert and bestial bully this country has ever known.

And we are going to use all of the above, and more, to dismember him and his Cons in the next few months.

Hold those statues in Albertonia The New Progressive Alberta... 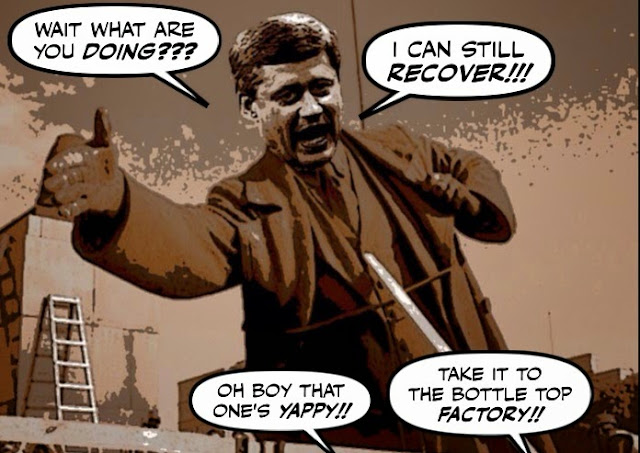 The dictator is crazy desperate.

His luck has finally run out.

I think harper's going to be spending a lot of time overseas before the next election. He's a complete coward and skipping the country is all he has. Plus, he also gets to strut around like a big shot.

Love the Edvard Munch version of "The Scream"!

Thomas Jefferson said "when the people fear their government, there is tyranny; when the government fears the people, there is liberty."

A variation of this came in the comic book, and movie, V for Vendetta : "People should not fear their government. Government should fear their people."

I think by now harper and his warmongering government are beginning to understand that it is us, the citizens of Canada, that have the real power! They are the terrorists!

Lets VOTE orange, for what Canada used to be...

Agreed norberto if Alberta can be painted Orange Crush so can my country Canada. Let's rip the criminal paws of Harper and his cons off of Canada.

Harper reminds me of the christian devil incarnate. Okay I'm going to my Christian Alliance Church on Sunday then come Monday I'm going to bomb and kill just because I can.

Simon , you must remember the "Firewall around Alberta" letter that Harper and other cons wrote way back.
Those words must be coming back to haunt him with the orange flames even in his own provincial constituency!
And with the "class act" that Omar Khadr turned out to be in his press interview , his 24/7 team security breach must be turning his hair really white instead of "bottle white"!

Loved Notley's interview with Wendy M. at the CBC and talking about Peter Lougheed. Looks like she might have a copy of his old play book. What is Steve going to do then? won't be able to scare anyone now.

hi thwap...I don;t know about that, he has just about covered every place the ethnic vote comes from. The leaders he hasn't met he's inviting here. And he's got to do SOME campaigning in Canada. But yes he is a coward, his strutting around the world stage is both pathetic and hugely embarrassing, and we can't get rid of that Con clown soon enough...

hi Kathleen yes it's a good one isn't it? You may have noticed that my avatar is also an adaptation of The Scream. For nothing could better illustrate what it's like to live in Harperland...

hi norberto....may I remind you that now that Bill C-51 is law talking about tyranny is a thought crime. So I'm going to have to denounce you to the authorities for my own safety. ;) But yes, I did love V for Vendetta and the tyrant is going down...

hi Mogs....did you also forget that Bill C-51 is now law? And that last sentence could get you five years in the slammer or a secret CSIS prison. Pray it isn't some place in the Arctic, and yes let's paint this country progressive before it's too late...

hi hinofan...indeed I do remember that firewall letter, and I'm going to make sure it's introduced at his trial for Crimes Against Canada. I figure I should be worth at least three years. Along with another three for associating with Ted Morton. ;)
But yes wasn't Omar classy, and believe me he has done great damage to the Cons. Normally when Omar Khadr's name comes up in the news the Cons immediately send out an e-mail on the subject to their rabid base. But so far they haven't. Which tells me that they understand that now that Canadians have seen him, they can't portray him as a monster. And that will hurt Harper and cost the Cons lots of dollars...

hi e.a.f.....yes that cut to the RCMP's budget to fight child pornography is a great example of the hypocrisy of the Cons.. And definitely be used to hammer him the next time he poses as a friend of children. And yes I think you're right, Rachel Notley will not be an easy target. For firstly she's a fighter, and secondly if he does try to bully her it will reflect badly on him....

If Harper was anyone else in this country, he would be under psychiatric care by now.

What a tool. A bit off topic I know here but I'm sure you've heard that crud that Kevin O'Leary spewed about the Alberta economy. While the downturn does concern me I'm certainly not freaking out over it. My employer is quite diverse and I've seen first hand how a lot of other companies involved in my trade have screwed themselves by focusing on heavy industrial work (ie oil sands). Safety does go down. I don't care what anyone says and there is a reason why those companies aren't here anymore or at least no where near the presence they had when I first moved down here.

What Simon five years for telling the truth? Ha-ha like I really care? Harper can lie like a sidewalk and I can't tell the truth under his new draconian bill c-51. Sounds like Nazi Germany eh?