Rona Ambrose and the Disgusting Con Fear Campaign in Alberta 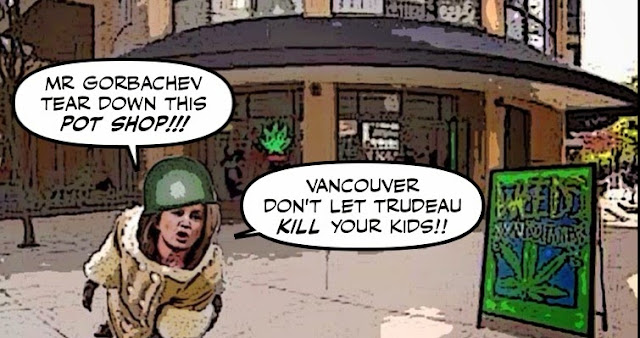 Oh no. I can't believe it. She's at it again. Rona Ambrose just can't stop scaring people, and has absolutely no idea of her own limitations.

Just a few days ago she was terrorizing the peaceful residents of Vancouver by posing as a Health Minister AND a Justice Minister.

And demanding that they close down their pot shops, before the Killer Weed kills them, and Justin Trudeau kills their children.

Now she trying to scare the people of Alberta, with dark warnings about the Deadly Job Killing NDP Menace.

While posing as a Finance Minister !!!! 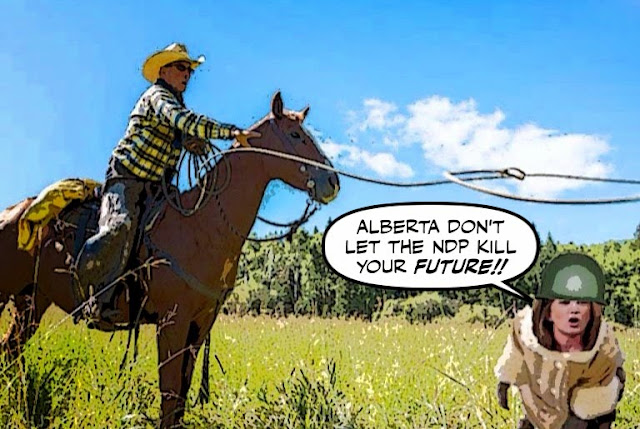 The Alberta economy is too important to the rest of the country to have Albertans conduct a “risky experiment” of electing an NDP government, federal health minister Rona Ambrose said Friday.

“I ask Albertans to really think twice and take a serious look at a party that wants to raise taxes on businesses. We need an Alberta government that is going to promote and advocate vociferously for the oil sector.”

Which had me gasping in disbelief, considering what the Cons have done to that province.

As well as holding my head in my hands and mumbling "Rona....Rona...you idiot. Remember your limitations !!!!"

But then of course she's scared stiff herself, so are all the other Cons. And with good reason.

The Alberta NDP has surged in one of the final polls of election 2015.

The ​poll of 3,143 Albertans finds the NDP leading in every region of the province with ​Tories following the Wildrose for third spot. ​ ​While the Tories, Wildrose, Liberals and Alberta Party all show support losses week-over-week (2% each), the survey shows a 14% increase for the NDP, to 44%.

Which as you can imagine has Stephen Harper in a high state of excitation. Terrified at the thought of the hated socialists seizing control of his beloved Albertonia aka Harperstan.

Directing the anti-NDP campaign from his anti-terrorist headquarters... 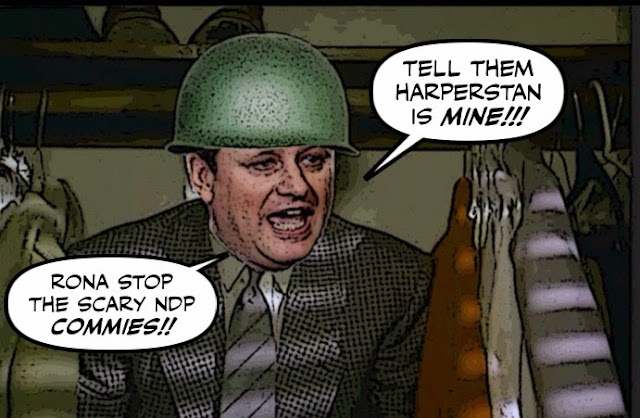 And summoning forth the business community to do its part to fight the tax terrorists.

Which explains why the crusty editorialists at the Globe and Mail, shuffled forward to declare that Jim Prentice had made a lot of mistakes, but was still worth endorsing.

There are times when voters become so angry at the party in power as to become fixated on the satisfaction that might be gained from getting rid of them. It’s how many Alberta voters are feeling right now. And with good reason. The thing is, there’s only one way to vote a government out: Vote another party in.

Because in their opinion the Wildrose party is a zombie party, and the NDP are communists unfit to govern.

An endorsement that could only have been reached by contorting themselves into this awkward position... But even that wasn't as bad as some business leaders in Edmonton who declared that if the NDP commies take power, and force them to pay TWO percent more in income tax.

Students and sick children will PAY FOR IT !!!!

With polls showing province-wide support continuing to rise for the NDP, business leaders from Edmonton are pleading for voters to cast a ballot for the Tories on Tuesday.

"If there's no bottom line, then there's no money that goes to charities. We won't make donations to charities," Mawji said, using the Stollery Children's Hospital and the University of Alberta as examples of where the losses will be felt.

Which like the whole fear mongering Con campaign against the NDP couldn't be more disgusting.

“Frankly, if I were them, I’d be more focused on talking with Albertans about what it is they can do to make the lives of regular families better,” Notley said just before voting in the Edmonton-Strathcona advance poll. “They’ve chosen to fearmonger about the NDP instead. I guess we’ll see ... which approach is more appealing and more convincing to Alberta voters.”

Rona Ambrose is still an idiot.

And Stephen Harper must be absolutely desperate... 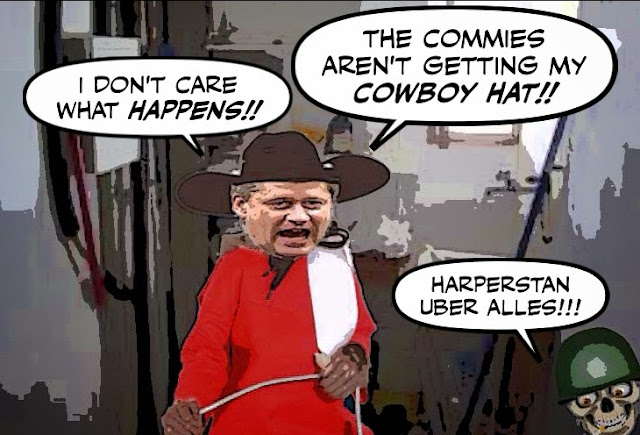 Albertans don't let yourselves be intimidated.

I find it very interesting that Harper always manages to put his female ministers 'on the front lines' ! If the NDP win on Tuesday, I'm betting that Rona and Roxanne will be 'thrown under the bus'!

This is a chance for Albertans to shake the political landscape even if it only lasts for 4 years!

Time for all Canadians to stand up and be counted come the next Federal Election......I'm pumped!

Link not letting me share......again.

hi Kathleen ...sorry about that, I fixed it again. I've been using the automatic permalink feature and somehow some extra characters are fouling up the link. Either that or I'm being hacked by the Cons.I'll have my web detectives, who are among the best in the country check it out....

hi Kathleen...Harper has always demonstrated the utmost contempt for his female ministers, and is far harsher with them than his is with his good ol' boys. The man is in addition to all his other flaws a hideous misogynist...

I read in the Edmonton Journal about those 5 businessmen, but the article was quick to point out how much they had contributed to the Alberta Conservatives and how well they did with contracts awarded to them by the Alberta Conservatives. These 5 businessmen are in business and they don't want to see their gravy train disappear. They aren't interested in how things work out for the rest of Alberta, just themselves. Well it maybe that the party is over for these 5 guys and the rest of the province will take priority.

People don't pay that much attention when the business buddies of the ruling party get contracts, as long as they get something. That stopped happening for the rest of Alberta, just the business buddies were getting what they wanted. People aren't happy. They want a change. That change will be best be brought to them with the NDP.

If the current economic conditions brought to Alberta are from the business class, then its clear the business class really doesn't know business. We all recognize the price of oil has tanked and that has had a real impact on Alberta. However, the business buddies and their political allies never gave much thought to what would happen if that occurred. They had no idea of how to save for the future. Norway does it. Alaska does it. Alberta didn't and now the chickens have come home to roost.

What the NDP is going to provide is a government which will balance the budget and not at the expense of the majority of taxpayers. I'd suggest today's NDP may have more in common with progressive thinking economic theories than the Conservatives do. The Alberta Conservatives are stuck in the "good times" and those days are gone. There is a new reality in the market and it requires new thinking.

hi e.a.f... I'm familiar with scare tactics or the politics of fear. I saw it during the last Quebec referendum and in the one in Scotland. But threatening a children's hospital really is the limit. Things like that really bother me. It's not like anybody pays much taxes in Alberta, so asking businesses to cough up an extra two percent doesn't seem unreasonable. It's just pure greed, and those bastards should be ashamed of themselves...