The New Campaign to Mind Bomb the Harper Government 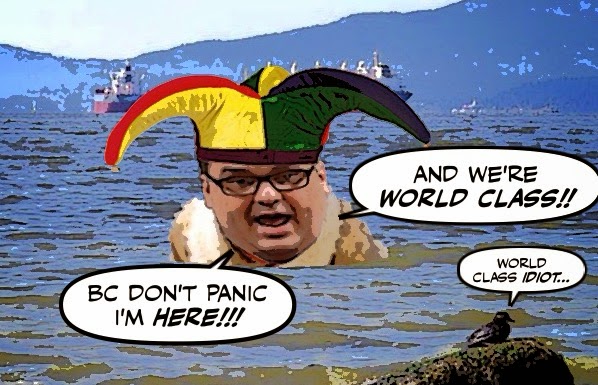 It's been almost two months since a ship spewed oil all over Vancouver's English Bay.

And who can forget how slow the federal reaction was, or how the hapless Con beluga James Moore reacted?

So now that we know how much an oil spill in nearby Burrard Inlet could cost that city.

A major oil spill in Burrard Inlet would devastate Vancouver's marine and shore-based economy resulting in losses amounting to $1.2 billion, according to a University of B.C. study commissioned by the city.

It's part of a campaign to mind bomb the depraved Con regime.

Adbusters aired an attack ad against Stephen Harper during an NHL playoff game on Monday — calling it the start of a “blowback campaign” against the prime minister.

“We are going to pepper television networks day and night with provocative counter-messages, starting with one mind bomb, then many,” a promo video for the campaign said. “This is just the beginning.”

And it couldn't be more welcome. Because as I said yesterday, we can't depend on the MSM to stand up for our values.

So we have to use social media to counter them, and the Con's lying propaganda.

The Harper government responded to the ad by touting its commitment “to protecting both the safety of Canadians and our environment.” “As a trading nation, Canada depends on marine shipping for economic growth, jobs and prosperity,” a spokesperson for Fisheries and Oceans Minister Gail Shea said in a statement.

And this is another good idea...

As is this one.

Before its depraved leader destroys our country... 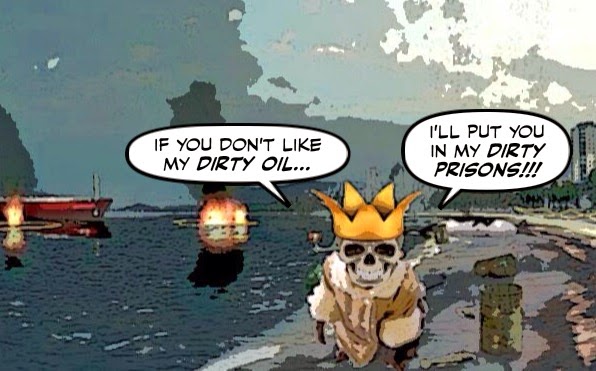 This is the way to win an election, well to get rid of harper and his cons.

We have seen what an oil spill is doing to the Santa Barbara beaches, although there hasn't been much on the news, quelle surpise? This will be Vancouver's reality once more tankers go through the harbour.

This country is so unready for any disaster, especially B.C. because we don't have any armed forces here, besides an air force base and a navy base. The navy base, well our ships are practically useless and they need craigslist to find parts.

We had a huge water disaster in a small town of Cache Creek in B.C. on the weekend, flash flooding and the people are on their own. Did harper decide it might be nice to bring in some army people to help. Nope. Send them to Iraq to kill or "nation" build fine, but a town with a lot of seniors who have devasted yards, not so much. of course you can't depend upon the queen of photo ops of b.C. either. its like the people can apply for up to $300K for their houses but that's it. Some in this town will never recover, but hell there is money for any 2 bit mining company in B.C. The B.C. Lieberals hand out more money to mining companies in B.C. than they take in.

While I totally agree with the idea. I think this "Adbusters ad" may be a bit too "over the top" for most Canadians.

Or a quiet ad saying how China-FIPA would allow Chinese investors to challenge laws of ours they don't like.
And that the Conservatives think that's a good idea.

hi e.a.f....yes I'm glad adbusters aired that attack ad, and I only wish I was watching the playoff when it played. One of my friends who clearly likes non Canadian hockey teams more than I do, sent me a message saying he had just seen a wild anti-Harper ad. But couldn't remember who had paid for it. !!#@!!! So I'm glad I finally found it. The Harper oil pimps are clearly hoping people (at least those who don't live in BC) will forget about that spill. So anything that reminds people about that is only too welcome...

UU4077 I have been following 'Adbusters' for years you have nothing to fear from them...

And the Canadians that hate them? The 1% & major corporations & big governments in bed with them. They Adbusters are simply pointing us in a better direction...

hi UU4077....well maybe the promo will be too much for some Canadians, because it does come from the same organization that helped start the Occupy movement. And we know how that uprising was greeted by many Canadians. But I and many others were inspired by Occupy, there is nothing radical about the ad they aired. If it helps move younger people or others who don't respond to more conventional messages , that can only be a good thing. And in this broken country anything is better than rolling over and playing dead...

The best defence is a stronger offence -- go get-em adbusters..

I think the ads are great and so true. These situations are Not made up.........do your homework!

I liked the Ad peoples adverts. Simon says, 'be creative'. So I will be as creative as I can be.

I remember when Adbusters did an article in their magazine [many years ago] called something like 'The Extra Luxury Celebrity Tax' here is how it went. So you know when you see those stupid Dodge Ram pick-up truck ads on TV during a hockey game or your favorite show even? Sam Elliot pitching those vehicles well guess what his million dollar contract gets tacked on to every truck they sell if you buy one you are paying Sam. Just for doing the voice over. Adbusters has now tuned Harper-con busters I love it. They have the experience to carry out a gleeful campaign but what a I have to laugh now oxymoron Adbusters doing commercials? But I have always loved them and appreciate and support their action. Hey some one gotta do anti Harper-con ads since Trudeau and Mulcair sit silent with a finger up their butt except when attacking each other.

Here is another good one 'The Robin Hood Tax:

Scroll down to the video called "THE BANKER"

Go Adbusters. Something has to counteract the frightened main stream media. They sit and listen to the worst lies and say nothing.

Ironic that it's largely been the Bible-believers of the western world over many decades who have sought to maximize profits by the introduction of strip mining, clearcut logging, building factories that pollute rivers and streams, etc. and thumbed their noses at God's creation!

First Nations groups such as the Tsleil-Waututh are more in sync with the Creator's directive for man to be a good steward of the earth (than Harper's brand of Christian.)

But there are lots of other Christians who are strong environmentalists: