The Incredible and Outrageous Vanity of Pierre Poilievre 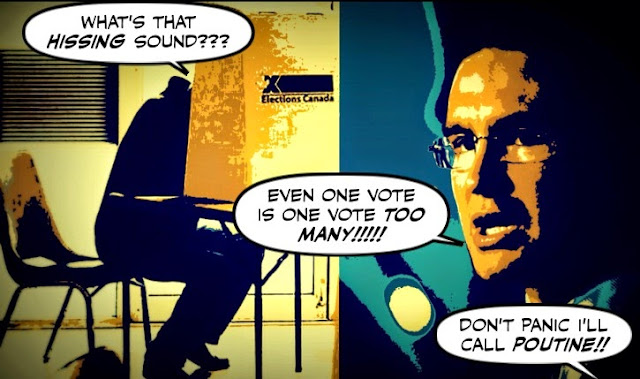 We know him as the rabid right-wing extremist who made it easier for the Cons to steal the next election.

We know him as the cruel fanatic who could play a Gestapo agent in a World War Two movie.

Or the union hating star of the Bates Motel... 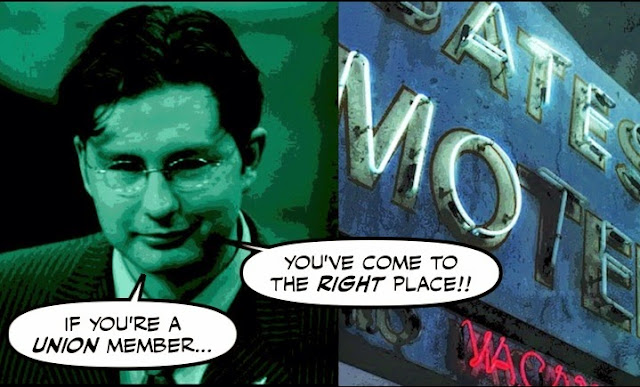 But who knew Pierre Poilievre aka Dickhead, could be so incredibly VAIN? 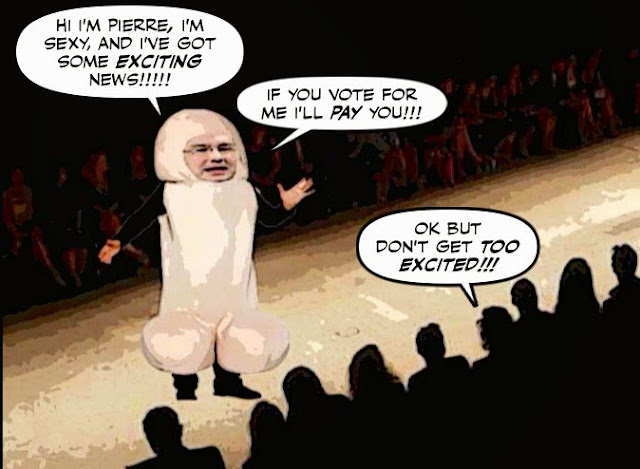 Employment Minister Pierre Poilievre commissioned a team of public servants for overtime work on a Sunday to film him glad-handing constituents in promotion of the Conservative government’s benefits for families.

The ensuing taxpayer-funded video – and other recent ones like it – are prompting concern that the Conservatives have taken a new step in the use of public funds to produce “vanity videos.”

The buffoon would spend OUR money to claim that Stephen Harper is willing to pay people to vote for him, with THEIR money.... 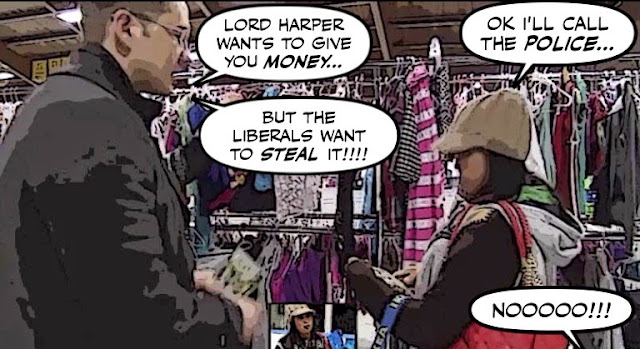 And then refuse to apologize.

In a statement, Mr. Poilievre said the Liberals don’t like the promotion of the government’s family-benefit measures because they would take them away. “In 2015, our government will make no apologies for using innovative ways to inform Canadians of the terrific enhanced benefits to which they are entitled,” he said.

As any decent person would after being caught in the act of misusing government funds.

Instead of bragging about his contempt for democracy.


Find out how to get more money for child care. Watch the video everyone’s been talking about https://t.co/8lH8HxhyCb #viral #UCCB #cdnpoli
— Pierre Poilievre (@PierrePoilievre) May 15, 2015

But then Poilievre has always been Stephen Harper's demon child... 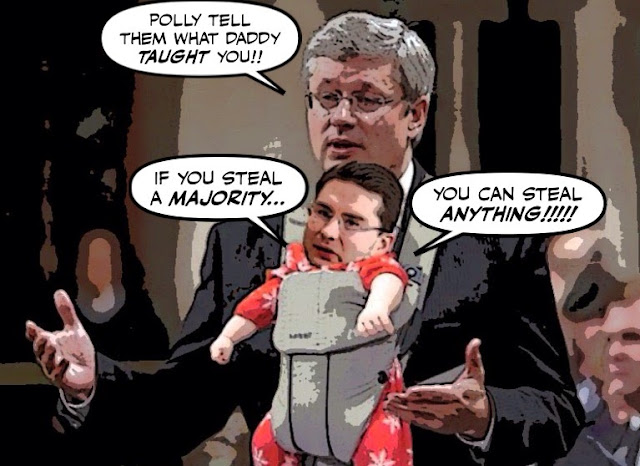 Neither of them would know decency if it jumped up and bit them.

“It’s a Mini-Me 24 Seven,” he said. “This is a minister of the Crown – not exactly in what you would call work clothing – hitting up people at a flea market, pushing pamphlets on them in front of a camera, measures that haven’t even passed through the House of Commons. The whole thing is patently absurd.”

And the burning question that must be answered is, how could they spend almost a billion dollars of OUR money, trying to brainwash us, and buy the next election? And think they could get away with it.

And of course, when can we get rid of them? 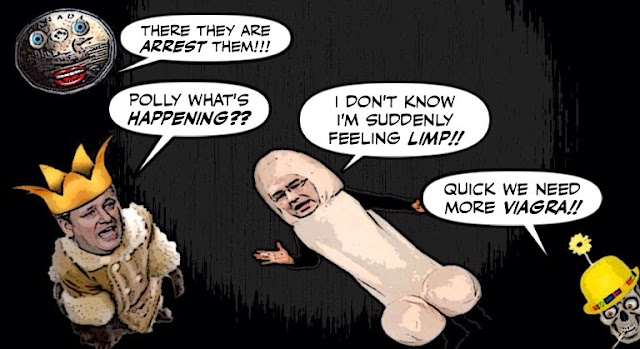 They are drunk with the arrogance of power. Those grubby Cons and their morally depraved leader really think they can get away with ANYTHING.

Let's disabuse them of that deranged notion, fire their asses, and if possible jail them.

Before they rob us further.

Before they steal our Canada....

Simon-- their appears to be a hook going on here at tax time. A cbc commenter claimed after reading though the full legislation, harper's government has cut the child support deduction and after all is said and done,the average tax payer will only see about $25 a month increase in child support.. whoopdy doo $25 is a joke...

I cannot understand how this creep is allowed, even by the Harperoids, to continue the madness...he is quite possibly their biggest zero whern it comes to attracting votes...and those awful vids, are they serious?
I heard on the news that so far the 24/7 vids were attracting only 400 in total..I would bet that number is a gross exaggeration...

Its this type of activity which will be the undoing of the Cons. As many struggle to pay for food, housing, health care, this guy is wasting our tax dollars with his campaigning with our tax dollars. No one believes his story about trying to get the word out about benefits for Canadians.

Out here in B.C. the biggest issue is going to be having a roof over your head, with homes in Greater Vancouver starting at a MILLION DOLLARS, and about a quarter of the housing stock sitting empty in Vancouver, owned by foreigners, waiting for the price to go up, so they can sell and make a profit. It works well for investors and developers to build one bedroom apartments, but not so much for families. Only the City of New Westminister, in Greater Vancouver, has passed a by-law which requires developers to build a percentage of apartments which are ``family size``. Add that to the highest rate of child poverty, in Canada, for more than a decade people won`t be turning to the Cons or the Liberals, because B.C. has a B.C. Lieberal party in office which over saw this child poverty and contributed to it.

hi jolly roger...I'm not surprised, their child support plan has always been a scam. It was never enough to provide children and their parents with decent daycare. And if we had spent the money on a national daycare system, we could have had more, better, and cheaper daycare for people all over the country. Those Cons really are the scum of the earth, and they should be arrested....

hi mizdarlin....Poilievre has been able to flourish because he reminds Harper of what he was like himself when he was a young Reform Con. He is a bestial pitbull who can recite one lie after the other without batting an eyelid. And also because he has benefited from the backing of Jenni Byrne, the even worse Con pitbull, now organizing their election campaign, who was once his "life companion..."

hi e.a.f....of course nobody can believe Poilievre. I have a collection of his Hansard quotes, and I have filed half of them under LIES, and the other half under BULLSHIT.
But I'll tell you a funny story. A couple of weeks ago Poislievre called on the other parties to sell his porky plan, and accused them of being, wait for it, too PARTISAN !!!!
I practically fell out of my chair laughing. But yes he is a scummy Con, and like all the others we can't evict him from power soon enough....

Unpacking the Politics: Cabinet videos on the public dime
http://globalnews.ca/video/2002738/unpacking-the-politics-cabinet-videos-on-the-public-dime

Yeah, you know, I think the Tories, I think the Tories minimize this, the potential political damage to themselves at their own peril because at any time when a government is approaching 10 years in its couple of mandates, the last thing they need is the public perception that they are arrogant, that they are entitled and that they want to spend money, public money, taxpayers’ money to get themselves re-elected and that’s exactly what is happening with these videos. Which frankly, you know a lot of people would say they don’t even blur the line, they’re just out and out propaganda, they kind of stuff you’d see from Moscow. Now do they really want to go to the polls with Canadians saying to themselves they’re spending my dime and I’m a hardworking taxpayer, like Stephen Harper would describe me, to get themselves re-elected. To their own benefit, they might want to think about pulling back and apologizing.

Can you imagine though, if we wound back the clock a little bit to Opposition Leader Stephen Harper and Opposition Conservatives if the Liberals had been doing this, I mean they would have blown a gasket.

On May 14 during Question Period,

Poilievre said (at least 7 times!) that the government "has created 1.2 million net new jobs since the recession".

The opposition parties need to respond to his use/misuse of this statistic: