The NDP's Brilliant Response to the Con Clown Joe Oliver 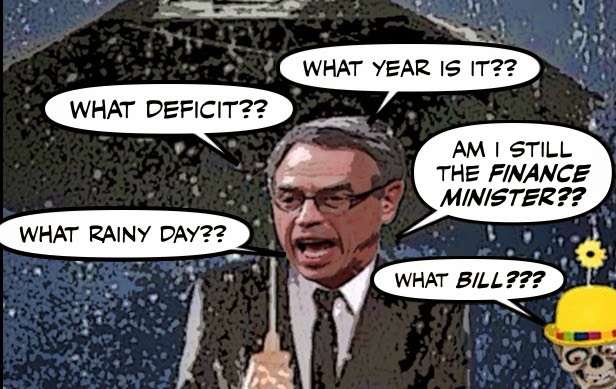 As you know, the thought that the old oil pimp Joe Oliver is Canada's Minister of Finance keeps me awake at night, with my wallet under my mattress.

Because I don't think he knows what he's doing, or even what year it is.

And his balanced budget proposal couldn't be more absurd.

Joe Oliver won't table his next budget for two more weeks, but the federal finance minister announced today that he'll table a second bill this month — one to force future governments to keep their books in the black.

A freeze on operating spending and a five per cent wage freeze for cabinet ministers and deputy ministers, following a published deficit.

Considering the way the Cons have kept us in a deficit situation for the last SEVEN years: 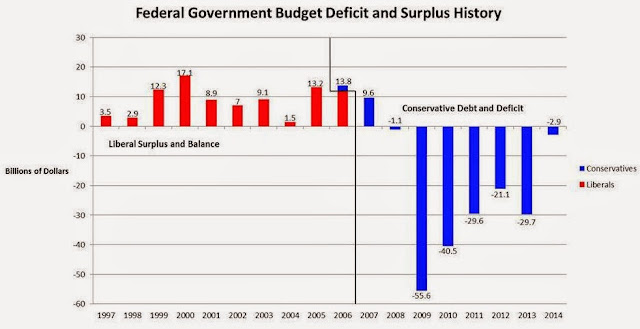 And the way Ol' Joe has been spraying red ink around... 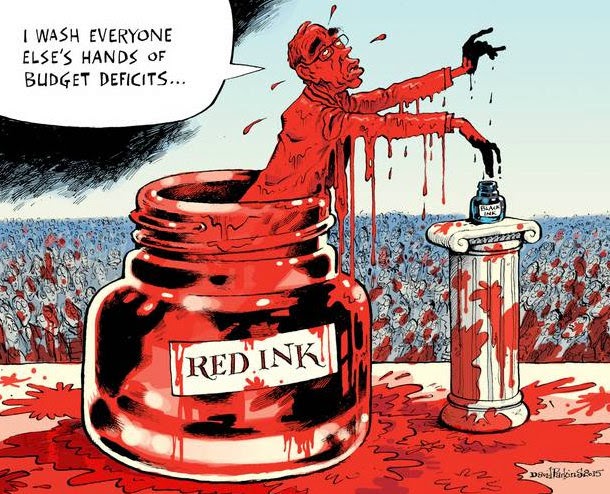 So I think it's only fair, and brilliant, that the NDP should hand him the bill.

The NDP wants Conservative cabinet ministers to dig deep into their own pockets and put their money where their mouth is.

In response, the NDP called on Tuesday for current and former Conservative cabinet ministers to do that retroactively and reimburse more than $2.6 million to taxpayers — what the NDP says is the combined total of five per cent salary for each cabinet minister during the years the Tories ran budgetary deficits.

And force Harper and his incompetent and hypocritical Cons to dig into THEIR wallets. 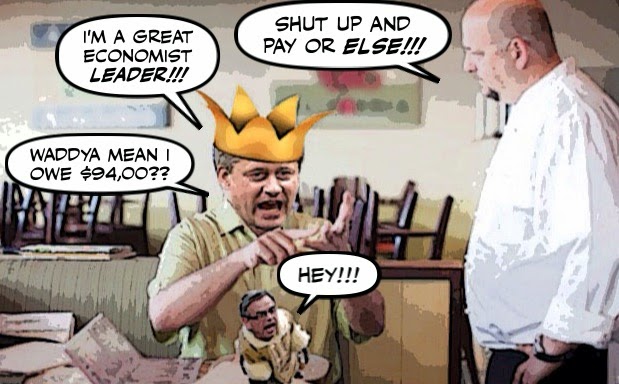 Oh yeah. One more thing. After they've paid the bill. And before we jail them.

Can we please fire them?

Before they ruin us all...

Finaly an opposition party with some ideas.

Trudeau says he might be open to a coalition with NDP if Mulcair wasn't leader.

This Con circus gets more bizarre by the day. Our gross debt has increased approx. 150 billion under Herr Harper and all everyone talks about is balancing what? The operating budget? It means nothing when the gross is, so gross. To the uninformed it's "oh goody", To the informed, "Bullshit"! Oily Joe's budget(s) un et deux, will prove to be the most monumental piles of shit that's ever been spewed. How about forcing future governments to chip away at our gross debt Oily Joe you idiot!
JD

Infographic: Who benefits if BC raises the minimum wage to $15?
https://www.policyalternatives.ca/publications/facts-infographics/infographic-who-benefits-if-bc-raises-minimum-wage-15

that would indicate the kid and the federal Liberals are afraid of Mulcair and that he might win an election. The kid wants to be the leader of a combined party. he isn't up to it, so he needs Mulcair gone. Not happening any time soon. if the Liberals do not have a good showing this time round, they will be looking to join the NDP and it will be on the NDP terms.

Of course the best laugh might be if Elizabeth May becomes the next P.M. of Canada. Then the boys will all be up a tree.

Joe Oliver, well he isn't any Jim Flaherty that is for sure.

Every time Joe opens his mouth he sounds like someone who spent too much time in a bar drinking and smoking. A finance minister?///// Steve must be getting desperate. Just because Joe worked for an oil company doesn't make him executive material. There are others in the party of Cons who could do a better job.

Maybe Nigel will pay the bill for them.

hi e.a.f... I lost what tiny speck of respect I had for Joe Oliver, when he started calling environmentalists terrorists.And it's gone downhill from there....

hi JD...there was no sound reason to balance the budget in such a hurry, when our economy is sputtering so badly, but everything the Cons do these days is for electoral gain. Trying to make themselves look good, no matter what they do to the country. It is a Con circus, and it couldn't be more shabby...