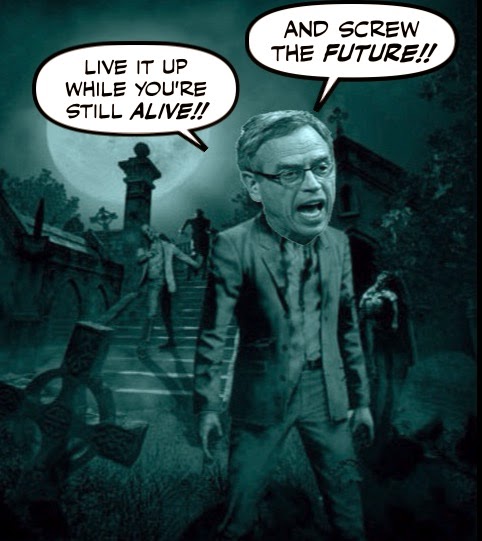 It is without a doubt one of the most irresponsible statements I have ever heard, and it comes courtesy of the old Con zombie Joe Oliver.

Who not content with delivering a smoke and mirrors budget worthy of a Con artist as I pointed out yesterday.

A so called balanced budget which is intended only to give them an excuse to try to buy the next election, by bribing some of the wealthiest Canadians.

Now says take the money, suck it up, and let future generations pay for it.

Amid criticism that it favours the wealthy and will saddle future governments with a tax leakage problem that could cost billions, Finance Minister Joe Oliver defended his budget's plan to almost double the TFSA limit on Tuesday, saying we should "leave that to Prime Minister Stephen Harper's granddaughter to solve."

Even though that burden can only grow, on the backs of a generation which is already facing a grim future of lousy jobs, crushing debt, no benefits, no pensions, and no hope... 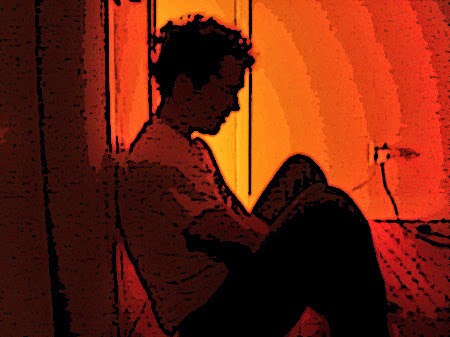 The doubling of the TFSA limit to $10,000 per taxpayer every year was a core plank of Oliver's balanced budget. But critics including the opposition parties and private sector economists have said the populist move will create a revenue problem for governments down the line, as more and more investments get protected from taxation.

And along with all the other tax cuts for the wealthy, and the way he Cons are piling on debt, will eventually cripple future governments ability to pay for ANYTHING.

Economist and research fellow with the Broadbent Institute, Rhys Kesselman, recently estimated that doubling the limit could cost Ottawa almost $15 billion a year within a few decades.

Even though Oliver and his Cons are only mortgaging the future so they can bribe voters with their grotesque porky party... 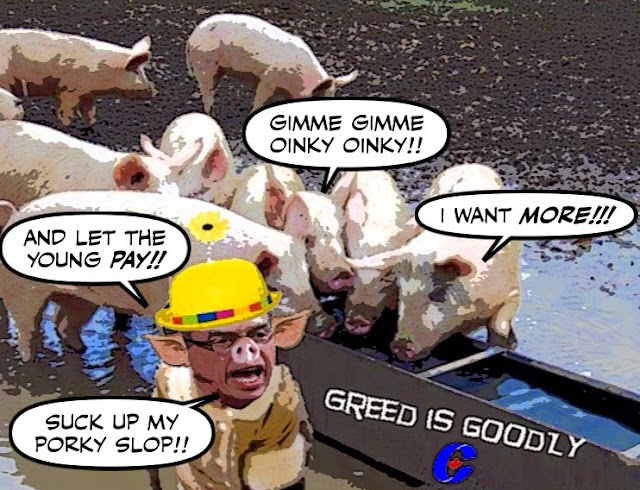 And even though this pathetic statement is not only callous it's fraudulent.

"I heard that by 2080 we may have a problem. Well, why don't we leave that to Prime Minister Stephen Harper's granddaughter to solve that problem."

"If you have to go to 2080 to say there's a problem with the program I think you've got a pretty good program," Oliver said.

Because although I don't object in principle to tax free saving accounts, especially for seniors who are seeing their savings eroded by low interest rates, how many Canadians can afford to stash away $10,000 a year?

And the effects of the Con's criminally unsustainable tax policies are already being felt and already affecting Canadians of all ages.

With the Harperites claiming poverty as an excuse to not strengthen the Canada Pension Plan, and making poor seniors wait until they are sixty seven to claim Old Age Security.

While they make plans to slowly strangle medicare... 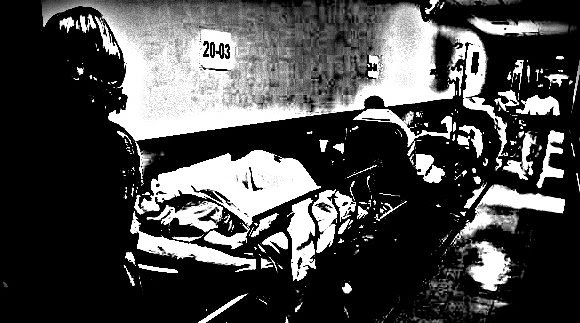 So if the older generation thinks they won't be affected they are tragically mistaken. For not only will there be an epidemic of poverty in this country.

Many poor seniors, especially in the less wealthy provinces will end up in second rate, understaffed hospitals,getting third rate care.

So these selfish Con policies will end up hurting us all young AND old.

And the good news? This should be a wake-up call to ALL generations.

It will definitely help us motivate young Canadians to get out and vote in the next election.

Once we start spreading Oliver's message all over the country...

And when we couple it with this one aimed at older Canadians... 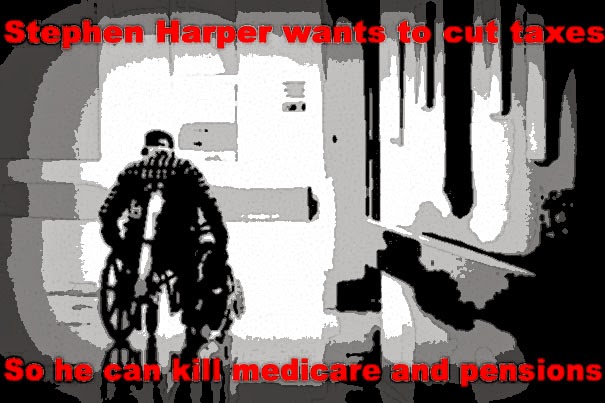 We will finally unite young and old Canadians against the greed and selfishness of the Cons.

And our message will be this one:

Stephen Harper and his Cons are trying to kill government, so they can turn us into a cruel jungle.

Send them to the court of history.

Charge them with crimes against the future of humanity.

And let its judgement be a harsh one... 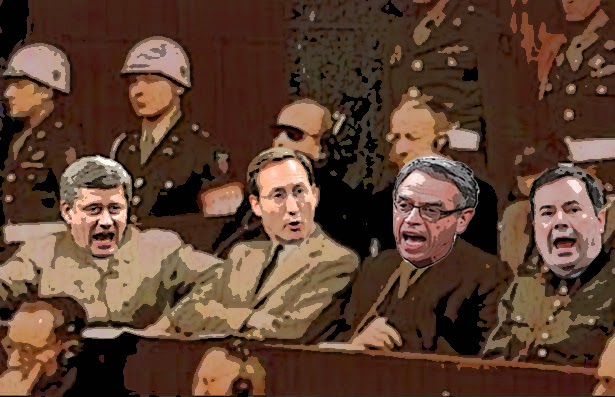 You know, the greatest, most sacred responsibity any generation of human beings has is to pass on the place we lived in, and the planet we lived on, for such a relatively brief time, in as good or better condition than we found it.

And with their criminally irresponsible views on the economy, and their criminal inaction on climate change, they have violated that sacred oath.

And they can't be punished enough...

Oily Joe must have had a few too many wobbly pops when he said that. That's not an excuse, it was Jolly Joe pompously voicing the truth though he'll be horse-whipped for that. Thanks Joe, for telling the truth for once. And Steve, may Joe's words make you squirm again and again and again...
JD

For anyone who is interested Michael Harris is being interviewed on the Agenda tonight, Brent Rathgerber was interviewed first, Great watch.

Aw, poor Joe,he was just confused and did not know what he was saying,this is not his budjet but his masters,
Steve"s, he was just quoting party lines and probably went off script,after all he has been around for quite a long time. people;forget that he was John A. Macdonalds finance minister,...nuff said

These f@ckers are just completely beyond the pale. What's really shocking is that there are people who will actually vote for them.

And so he can line his friends pockets eh?

In "Party of One," journalist Michael Harris argues that Stephen Harper has given Canada a radical makeover - one that fundamentally threatens Canadian democracy. He lays out his arguments and discusses the role Harper's personality will play in the upcoming election.

hi JD...I do think Oliver was carried away, either by his first budget, or the sight of Amanda Lang's rosy red lips. ;) But I am grateful for his outrageous statement because we are going to use it against the Cons all the way to the next election. And by using Harper's granddaughter as an example, he has indeed given us a weapon to make Harper squirm over and over again. I thought the Con clown Kenney was good, but Oliver is even better. Encore, encore I want more....

hi anon...yes absolutely, that so-called budget was written in the PMO and all Joe was ordered to do was read it in the Commons, and memorize his talking points. As you may know I have been making fun of him for a while. I was sure he didn't know what he was doing, and I'm feeling vindicated today. Oh boy are we going to have fun with this one.... ;)

hi Hugh...It is shocking, and I refuse to accept a Canadian government that has absolutely no moral compass. I'm not a goody two shoes but they offend every bone in my body. And I literally can't wait to see them expelled from office. I'll even volunteer to swab our parliament with Lysol after they have finally gone...

They will probably sell everything in parliament when they realize they are gone...