Harper Confidential: The Secrets He Doesn't Want Canadians To know 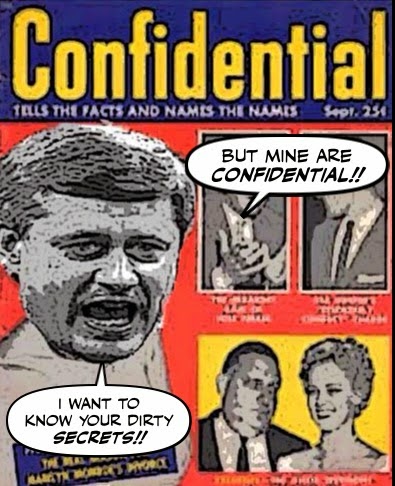 As we know Stephen Harper is preparing to pass Bill C-51 so he can turn Canada into a police state and spy on us all.

Because he does want to dig up as many dirty secrets as possible, use them against his opponents.

And finally achieve the state of Total Control the voices in his head have been demanding for so long. Because they don't call him Ol' Handcuffs for nothing eh?

But it seems that Great Ugly Leader doesn't like the idea of Canadians finding out his dirty secrets. So he's making that a terrorist offence.

The federal government will invoke a clause used in terrorism trials on Friday as part of its fight to keep information about the prime minister’s family from being made public.

Federal Justice Department lawyers filed a factum on Wednesday that states they will invoke Section 37 of the Canada Evidence Act in an effort to block media organizations from unsealing documents containing allegations that the RCMP leaked secrets about Stephen Harper’s family. 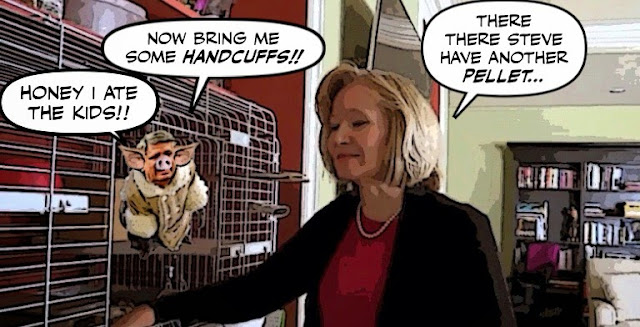 Because they might be too horrible for most Canadians to handle.

It's easy to understand why Harper is so desperate to stop any more secrets from leaking out.

After the way the ones being exposed at the Duffy trial are embarrassing him.

Stephen Harper's name surfaced at the Mike Duffy trial Thursday as court heard from a string of contractors who were paid through a taxpayer-funded account that the suspended senator allegedly used to skirt finance rules.

Because let's face it this is embarrassing... 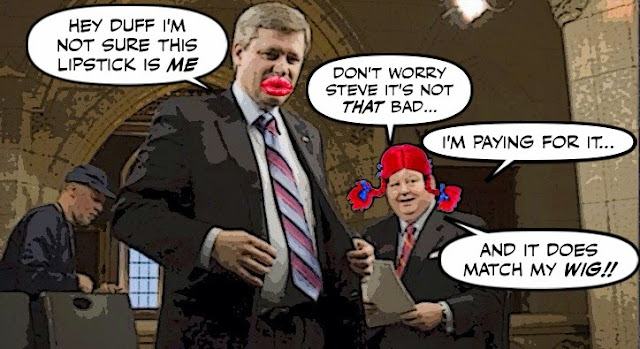 Last week, a government source told The Canadian Press that the makeup services Harper received that day weren't paid for by taxpayers. On Thursday, Lambert told a different story.

"On this occasion of the G8, did Prime Minister Harper pay you anything for the services he received, or did you take the $300 to be payment in respect to the services you provided the prime minister?" asked Duffy's lawyer Donald Bayne.

Gawd. First we find out that the two men were so close Stephen Harper considered him his BEST appointment. Then we found out they shared the same makeup artist. Now we find out that Duffy paid to make Harper look pretty? 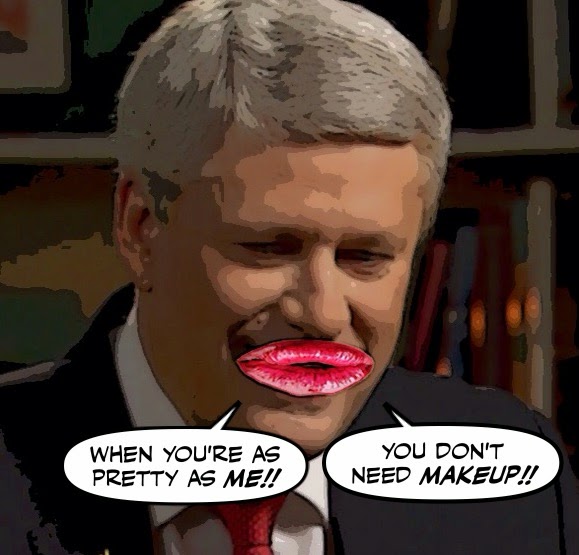 But the good news is those grubby little secrets are already taking a toll on Harper's popularity.

And the best news is the trial is going to go on for a long long time.

The prime minister’s former chief of staff Nigel Wright once referred to the Mike Duffy affair as “Chinese water torture.” It appears the drip, drip, drip of information at Duffy’s trial will spill over its scheduled end date.

So he will not be able to hope that Canadians will forget the trial.

It will follow him all the way to the next election.

And it will help bring him down... 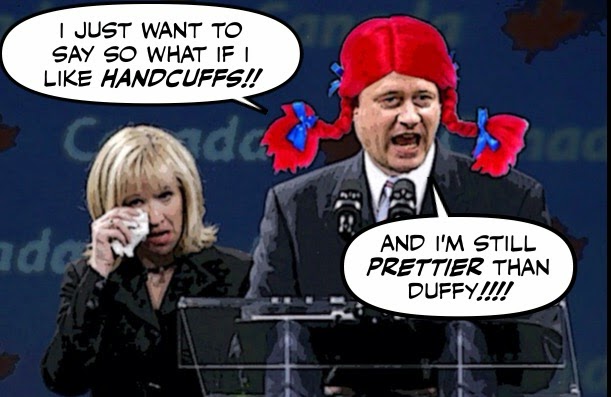 The man who would creep our secrets.

May very well be destroyed by his own...

What family secrets is he so adamant on keeping? Does it have to do with Laureen? If the latter, isn't it already an "open" secret ? :)

Then again, it is all very consistent with the modus operandi of this guy. He brings in C-51 which threatens all our privacy as well as civil liberty, even democracy. Then he invokes a sledgehammer terrorist clause to protect his own privacy.

Just as he apparently dove for the closet at the first roar of an old hunting rifle .... while sending Canadians into war and cutting veterans' benefits. Also while leaving his caucus, which included a paraplegic MP, and a female MP who was apparently so frightened she was twitting her mom in real time, to fend for themselves.

Which is why I have concluded that the 30% of voters who say they still intend to vote for this guy's government have the same values as their Great Closet Leader.

It is all about themselves and having their own noses in the public trough apparently .... the Duffy trial is providing evidence of the latter, isn't it?

.. will Harper Family Secrets bring down the government ?
or better said, will Harper Secrets preclude his re-election .. ?
even threaten him in his own 'home' riding in Calgary ... ?

Why does the Harper ReformerTory Party seem to be tottering..
relying on Secrecy, Suppression, Intimidation. Obstruction of Revelations ?

Goodness gracious.. the few, the Proud, the Strong, the Free .. 'Conservatives'
seem to be circling their wagons, gathering their attorneys & spin meisters

I wonder if Ezra Levant used the same makeup services as Mike and Steve.

Reminds me of Adele's wonderful song, 'Rumour Has It'.......awesome. And we all know rumours usually turn into facts.

If the news story about Harper wanting to introduce conscription after the next election is fake, why hasn't anyone from the CBC news web team publicly refuted the March 31/15 story? I realize that some reporters that are not from CBC have said the story is fake. So how do they determine the story is fake?

hi anon...I have no idea what "family secrets" Harper is trying to hide. But yes, isn't it the ultimate in hypocrisy? He would invade our privacy with his bestial bill C-51, while using the anti-terror act to protect his privacy. And like you I can't understand why so many Canadians still support the Cons. But the good news is that it only makes the Harperites look more like a dangerous cult, and hopefully we can use that to help defeat them...

hi salamander....well I have to admit I am intrigued by this desperate attempt to cover up these so called "family secrets." I was hoping it might involve the strange case of that party at 24 Sussex Drive where a young underage woman had to be taken to hospital suffering from alcohol poisoning, but the adults in the house were not charged, and the case quickly shed up. But whatever it is, the judge in the case has reserved her decision, so there is still hope that those secrets will be revealed. Which would be good. Because although I have nothing against his family, and do believe in preserving he privacy of all, if it's a Harper secret it must be nasty, so let the truth set us free. The former RCMP officer who collected those secrets is also making some very serious charges against the RCMP high command, so there is a lot more at stake than those family secrets, and we do need some light...

hi Kathleen....I'm not a person who enjoys gossip, and I avoid the Hollywood rumour mill like the plague. But I must admit, if Stephen Harper is hiding something, I do want to know... ;)

hi anon 2:22...I'll have more to say about the conscription story soon, and all I'll say for now is that I have still not concluded that the story is fake....