Bill C-51 and the Dangerous Apathy of Canadians 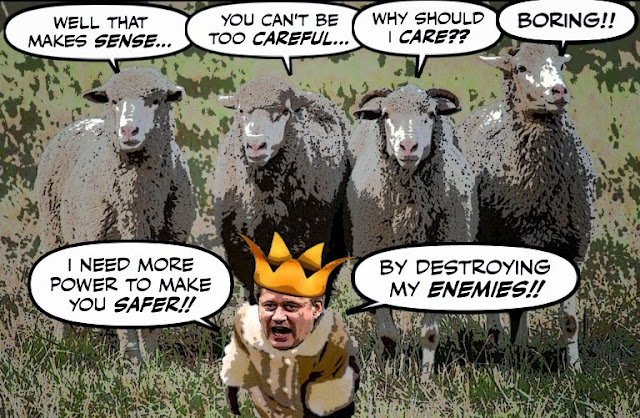 As you know I find it hard to understand why so many Canadians are so complacent about what Stephen Harper and his foul Con regime are doing to this country.

Violating our values, making a mockery out of our democracy, and trying to turn us into a police state.

And when I saw this tweet from Susan Delacourt yesterday...

I was reminded that apathy is our worst enemy, and Stephen Harper's best friend.

According to legend, March comes in like a lion and leaves like a lamb. If that pattern applies to politics as well as weather, the Conservative government may have reason to hope for a more optimistic spring — for public anxiety about its security platform to be replaced by the usual wave of apathy.

The Commons committee hearings on the anti-terror Bill C-51 wrap up this week. The motion to extend and expand Canada’s Iraq military mission into Syria has passed. Starting next week the Commons takes two weeks off, which should lessen the pressure on the government. And Prime Minister Harper has another reason to expect that voters’ worries about the damage being done to their civil liberties by C-51 will soon fade away.

And although there are many reasons for that:

We live in a very big country and that size — coupled with the complexity of our federal system — lends itself to indifference. Governments have fostered that attitude by abandoning unifying national initiatives in favour of regional “program delivery”. In so doing, they’ve behaved as if they are less and less accountable to the public and Parliament. Canadians have become gradually more comfortable with the prime minister wielding vast executive authority on his own — changing from first among equals to first without equals.

It bothers me that so many Canadians are willing to trust Stephen with their freedoms. Or just don't care.

And this latest rant by Rick Mercer really hit home...

Because I have worked so hard and so long to try to get younger Canadians involved in the political process, and vote in greater numbers.

But the good news is, I sense that the situation is changing.

We have shown what we can do when we want to...

And as I mentioned last night, we are planning other ways to keep the battle against Bill C-51 alive.

So let's not get discouraged. Let's send out this message.

To young people and all the others.

Stephen Harper and his filthy Con regime must be defeated.

Canadians are waking up. We are not sheep.

And apathy is not an option... 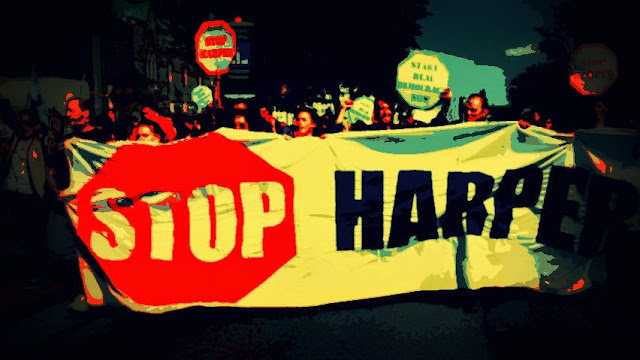 I totally AGREE! Apathy is Not an option!
I see this on a daily basis.......yesterday I mentioned to a 38 year old that I was looking forward to the Mike Duffy trial and all I got was a stunned look. This person didn't even know who I was talking about!

As I had previously posted here, it would be interesting to see how Michael Chong, the Con MP generally lauded by our media as the Cons MP with the most integrity would vote on the C-51 issue. Recall that he had publicly denounced C-51, especially for its lack of oversight. It raised the question as to whether Chong would actually vote against C-51 or whether he would vote with his party and his public denouncement of it would be just that (a protest not backed with his vote when the rubber hit the road, so to speak).

Well, as it turned out, Chong voted WITH his party to limit the debate of C-51 and also voted against the amendments put forth by the opposition, including some mechanisms for oversight of the unintended consequences of the bill. The bill that was passed still lacked any oversight mechanisms, something which Chong had publicly stated he was most concerned about.

Surprising? Not really. Chong had also voted with his party to pass the "Unfair" Elections Act and to limit its debate too. Those who had paid attention would also recall that Chong had declared victory after his Reform Act was passed, with the support of the opposition as well, despite the fact that it had been "harperized" until it was toothless.

Thus the next time someone tells you about this "maverick" Con MP called Chong who does not agree with Harper's policies, remind them of Chong's voting record in supporting his party on the major bills, eh? To be fair, the only positive thing that remained was that he at least vocalized his concerns but the fact remains that he still helped his party pass the major contentious bills despite widespread public objections.

Lots of people care. It is the media that lets us down. If they don't report and talk about things gone wrong what is the citizen who cares supposed to do. The Council of Canadians with over a hundred thousand members cares. CRUSH cares. Leadnow cares. Peace groups care. Anyone who votes NDP cares and so do a lot of liberals. But the media who constantly use the excuse that nobody cares so it doesn't matter if we talk about serious things,k as a justification is getting up my nose.

hi Kathleen...yes I come up against that ignorance all the time, and the apathy in this country makes me both angry and depressed. But I am doing my best to get the youth vote out, and with some of the things I learned during the referendum in Scotland, I am making some albeit humble progress....

hi anon...Chong announced right from the beginning that he still intended to vote for the bill. Which is why I didn't include him in my list of dissenters. It was a gesture, and a welcome one, but in the end it doesn't mean anything. Just like the defection of James Lunney doesn't mean anything either, since although he's now sitting as an independent, he says he's still going to vote with the Cons. But then we can expect the Cons to show any fortitude, when they have been cowed sheep for so long...

hi anon 1:27...you're absolutely right, there are a lot of people who care, and I did try to end on a positive note, but maybe I could have done better. I will try to connect people with all the groups out there who are working to get the vote out. And as for the media, they have been far too passive for far too long, but even there I sense things changing. And since we are the people who spend more time on the internet than anybody else in the world, we can use it during the campaign to create our own media....

hi David...thanks for the link I should have added it myself. I'm going to make a list and put it in my sidebar....

Vote for Harper of you approve of the bigoted, racist policies such as we see from the American Republicans, because that's what you'll get here in Canada of Harper is able to steal another election.