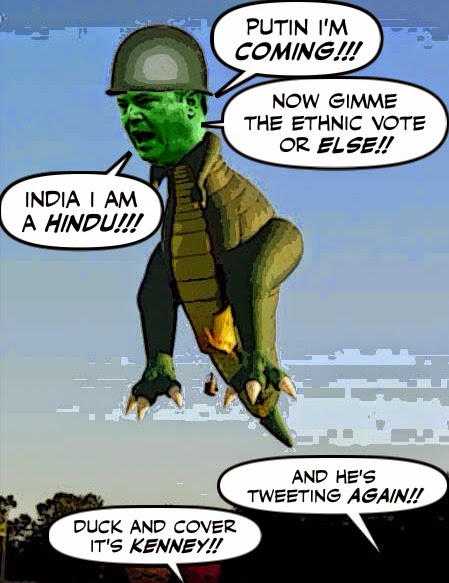 Oh no. Somebody do something. Jason Kenney is in trouble, again.

He's supposed to be terrorizing the Russians.

But instead he's terrorizing OUR side.

Because nobody at National Defence Headquarters knows what he's going to tweet next!!!

Jason Kenney is known by some at National Defence headquarters as the “tweeting minister.” It’s not unusual for Kenney to be given a briefing on Iraq and a few minutes later he will be tweeting some of the information he has been told.

Kenney and his staff have also been pushing various commanders to make more use of social media as well as to tweet more. But few are keen to follow his lead. That’s because Kenney’s misfires on twitter have become well known inside NDHQ.

He can't keep his mouth shut, he can't stop lying. He's the Defence Minister and he doesn't know what he's doing or saying.

Now Defence Watch readers have sent emails pointing out the latest Kenney twitter problem. It concerns the naming of an Arctic Offshore Patrol Ship after a hero from the Second World War. “The HMCS Margaret Brooke will be the first-ever RCN ship named after a Canadian woman,” Kenney tweeted. As navy officers who read Defence Watch point out…….you never use the word “the” before HMCS. That is the same as writing “The Her Majesty’s Canadian Ship.”

And while this latest gaffe doesn't bother me as much as the others, you'd think Kenney would know better... 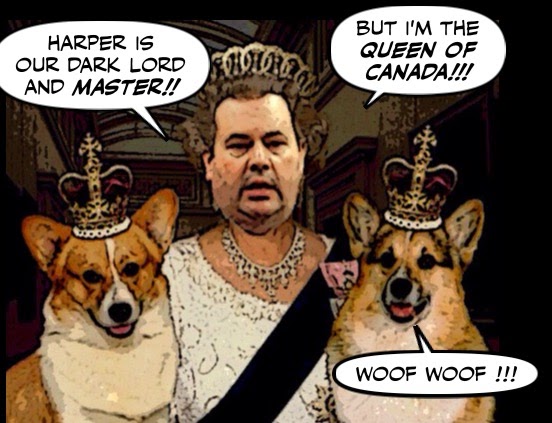 And It does make me wonder how we are supposed to believe him when he says this:

Kenney said this is another step in Canada’s efforts to help Ukraine “maintain their territorial integrity against this illegal and unjustified aggression by Vladimir Putin.”

When we all know it's all and ONLY about trying to maintain the Con's majority, by pandering to the ethnic vote.

Or for that matter believe him when he says this:

He stressed that Canadian troops will be “as far removed as possible” from the conflict in eastern Ukraine, and that the risk of engaging in firefights or sustaining casualties is low.

Because as we all know he did say the same thing about our mission in Iraq, and he was tragically wrong.

But then for him and his depraved leader Stephen Harper, our men and women in uniform are just cannon fodder in their Great War to Win the Next Election.

For which Kenney will do ANYTHING.

Even fawn at the feet of the Hindu extremist Narendra Modi, and by fawn I mean fall all over him... 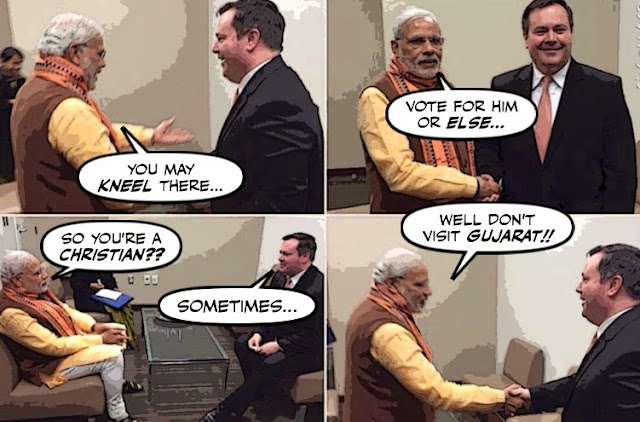 Even though Christians in India are complaining that Modi isn't doing ANYTHING to protect them from his fundamentalist supporters.

Criticizing the recent attacks on Christians across the country, including the rape of a 75-year-old nun in Kolkata, Rt Rev Bishop of Poona Thomas Dabre urged the government to guard the community's freedom to profess, practice and propagate its religion as per the Constitution. "Fundamentalist elements feel that they can do anything against minorities, especially Christians, under the rule of Prime Minister Narendra Modi," Dabre said.

But then when I saw video of Kenney at the big Modi rally in Toronto the other night, waddling around the stage screaming in Gujarati.

Defence Minister and Minister of Multiculturalism Jason Kenney took the stage to warm up the crowd before the leaders’ speeches. Mr. Kenney began by greeting the audience in different Indian languages, including Gujarati, the predominant language in Mr. Modi’s home state. When the minister spoke in Gujarati, a cheer erupted in the crowd.

I realized that this story must be driving him to distraction.

These are hard times in redneck Alberta.

Kenney IS Randy Bobandy, and he is out of control !!!

And yes, needless to say, the sooner we can put a net over him.

And fire him and his depraved leader. 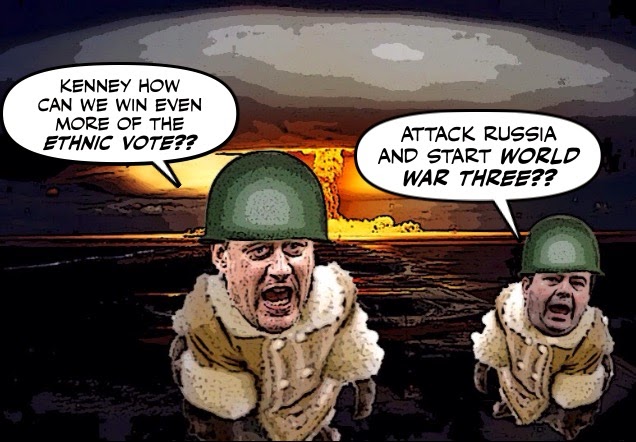 The only way the present Canadian Government will get to stay where it is by October 19,2015, is IF WWIII breaks out by then. Canadians should be looking at the Bigger Picture as to what is actually happening on this Big Ball of Mud! Mr. Kenny appears to know more than most think!!!!!

I guess kenney replaced baird as the "queen" of Canada. ;-)

Hmmm. I wonder what Modi wants Canada;s uranium for?

hi Kathleen...well I wouldn't go that far, or at least I hope you're wrong. It will take a superhuman effort to evict those Cons from power, but hopefully less than a nuclear war. That said, I find the Con foreign policy extremely dangerous particularly in Ukraine where they are intervening in a civil war, instead of calling for a negotiated solution, because it's clear to me that more killing won't solve that country's divisions, and can only lead to a confrontation with Russia that could lead to a dangerous superpower confrontation...

hi anon...well I have always seen Jasonella as the true Con Queen of Canada, Baird was a big mouth, but I find Kenney particularly sinister. And he looks better than Baird wearing a dress and a crown...;)

hi David...well our incompetence helped India make its first bomb, and I'm sure our new supplies of uranium will only help add to their arsenal. Which can only make the situation in that region even more dangerous. These days it seems we can't do anything right...

oh, this is just so funny, I can hardly wait for Kenny to twit some state secret right after a briefing by the military. gee I wonder if steve will have him arrested as a terrorist??