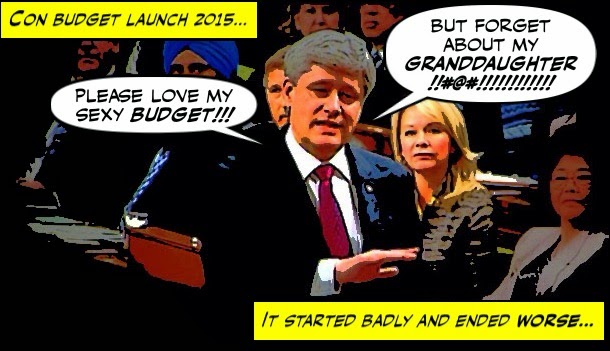 It was a frightening sight, and for a moment I thought Stephen Harper had finally gone off the deep end.

For there he was, on the day when he was supposed to be celebrating the launch of his new budget, screaming at the opposition, waving his arms around wildly, trying to explain why he's trying to bribe the rich.

While simultaneously trying to shrug off what Oily Joe Oliver had to say about his granddaughter.

Opposition MPs repeatedly questioned Harper about Finance Minister Joe Oliver's statement that any government revenue shortfall created decades from now by the tax-free savings account﻿s would be a matter for Harper's granddaughter to solve.

Harper called criticism of the accounts "a clearly preposterous argument." "The tax-free savings accounts have been great things for Canadians, for the Canadian middle class and for the Canadian economy," he said.

If the Cons had dressed up as clowns and done a conga line through the Commons.

So I can only imagine what Great Leader must be saying to Ol' Joe Oliver... 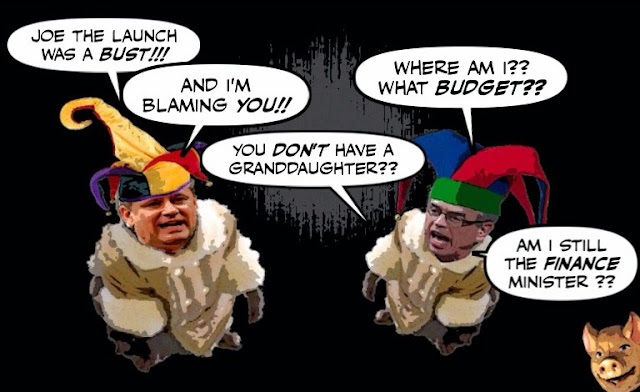 But then why should we surprised? When they are both Con clowns. All they care about is bribing some niche-voters, to try to buy the next election.

And as Michael Harris points out, it is all a shell game.

No wonder they’re spending $7.5 million in public money to advertise Joe Oliver’s budget. Bernie Madoff couldn’t have come up with a sneakier sell than this. Still, no one should be surprised. This misbegotten government’s modus operandi is about much more than information control. It’s about soaring, jet-propelled skullduggery in a never-ending political campaign. It’s a power fantasy. It’s Steve’s way.

Numbers mean as much to Boss Harper and his gang as the truth does... 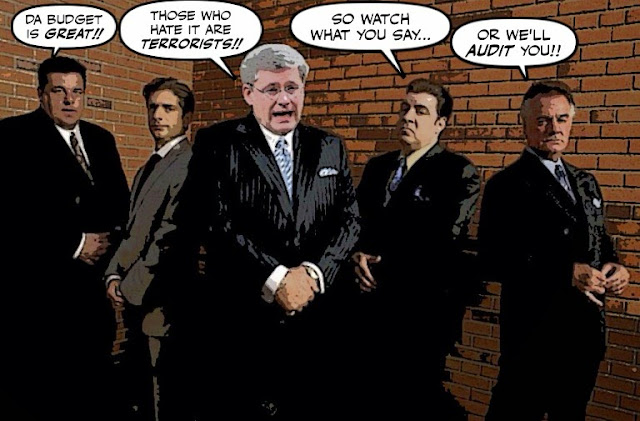 Numbers have a wonderfully elastic quality to them; like Harper cabinet ministers, they say what they’re told to say. Numbers are the favourite tool of fraudsters and politicians alike. One swindles money, the other swindles votes.

And by reducing federal revenues to their lowest point ever, the Cons are weakening our country, mortgaging our future. And like Harper's granddaughter, we are ALL going to pay for it.

The best part? It will all be paid for by Canadians, whose consolation prize is getting to watch the social democracy it took us fifty years to build wash away like spring snow.

But I’m the first to admit that there are some winners in Budget 2015. If you’re a wealthy CSIS agent with a stay-at-home wife who believes the beheaders are coming to the 905 belt — this, my friend, is the budget for you.

Joe Oliver has just given us an amazing quote to use against the Cons in the next election, and beat the stuffing out of their porky tax plan.

Or mock it mercilessly...

@PaulSmithTO @MaudeBarlow To Harper there is no "public" - there are only voters and donors. #cdnpoli pic.twitter.com/9XNujNrSqB
— Stephen Lautens (@stephenlautens) April 22, 2015


And as a bonus, encourage young Canadians to vote in record numbers.

Which must surely make it the most disastrous budget launch EVER.

In fact the only way it could have been more ridiculous was if Stephen had flown into the Commons on his porcelain chariot... 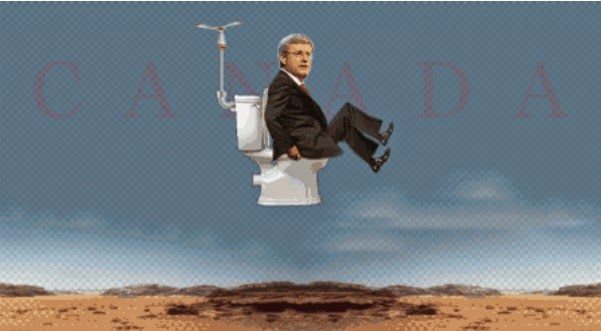 And delivered his less than stirring defence of his porky tax plan in the sitting position.

Or if the desperate Cons had taken a page out of the musical The Producers.

And introduced the budget and their Great Leader this way...

For that is who they are.

They are Con clowns, it is a fascist circus.

Their leader is crazy, desperate, and dangerous. 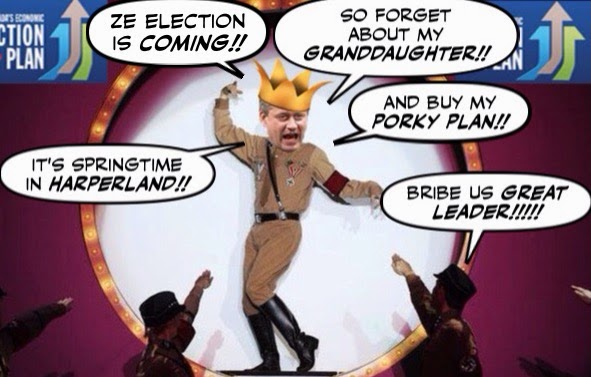 The is a group lobbying to have Canada return to pre 70 borrowing from the Bank of Canada instead of the private banks. I will find out its name so people can join it. It will probably be labelled a terrorist group because it is not bowing down to the corporations.

An old saying I once heard is "you can tell the true make-up(no pun intended) of a man by how he treats his mother". So anyone actually know how Stephen Harper treats his Mother?

It's called the Qualicum Institute Simon and everybody should look at and read its home page and see how private banks took over. ?And what happened to our debt then.

Well Kathleen, the first person Slithery Steve called when he slunk out of the terrorist resistant closet was his mother. That tells me something about his character . Not his wife, not his kids; they don't seem that relevant to him.

He may have a time machine in the closet and was able to call his granddaughter in 2080, but I can't confirm that.

Anon it is called COMER https://www.google.ca/#q=comer+vs+bank+of+canada [Committee on Monetary and Economic Reform] they are involved in a law suit suing The Bank of Canada and several other government beasts like the pretend finance minister... Um and The Qualicum Institute is more of an environmental group who I'm sure is being harassed by Steve's government because they do not buy his criminal cabal clown gong show.

The laugh may be on us, folks. Closet Leader was going to spend $7.5M of our money to hoodwink us on his budget. With Oliver's (Freudian?) slip about leaving the problem to Steve's grandkid, Closet Leader may now have to spend three times the amount to repair the damage. So I am unsure if we should laugh or cry, eh?

If Cons supporters are willing to raid their grandkid's piggy banks to pay for their tax cuts today, I think we would be well advised to watch our own grandkids piggy banks with that crowd, no?

They sold of and melted down precious gold coins from the mint and sold embassies at fire sale prices and sold silver and china from Rideau hall. Remember when they sold the tea services for 500.00 and when they had to buy them back because they had been given by the Queen they paid 50,000 plus. What else have they sold to get rid of this deficit. No wonder they are so secretive.

hi Kathleen...oh very well I imagine. After all when he finally emerged from that closet she was the first person he called. But don't ask me what that means I don't want to know...;)

hi anon...well I hadn't thought about it that way, but you're right. It's probably going to take another $7.5 million to repair what Oily Joe did to his porky plan. But the way I see it, that only means that in addition to his heavy prison term, he'll also have to pay a heavy fine...;)

hi anon...yes I was thinking about how the Cons have been selling the furniture as I was writing the post, but thank you for reminding me about the Rideau Hall debacle. But then if they had waited two weeks to sell off their GM shares they would have made an extra $100 million. So they don't know what they're doing and they are capable of anything...

Yes Mr. Mogs - The COMER LAWSUIT to " re-institute " our public bank has to get out to as many people as possible, and as quickly as popssible. I fear harper has something else illegal up his sleeve to dump the dollar and join a NAFTA currency union. Our great monetary equalizer battle against the banksters is being watched and cheered on many places in the world. I expect from what I have read, that Greece will adopt something along the same lines to get their country's finances back on track..

Cheers Mr. Pirate Flag he-he ya people need to know about COMER's action spread the word and donate to the cause. We have to win this one depending on who you read the banksters through interest payments alone have siphoned off either one or two trillion from Canada's economy since 1974. Money we could have put to good Canadian uses but you took it away PET because you were a bilderberger and following orders from the top 1% sucker. Thanks for that kick in all Canadians rumps Mr. Pierre Elliot Trudeau I hope you are in Steve's well you know. Either way it smells like a crime to me.