The Liberals Strike Back at the Con's Porky Action Ads 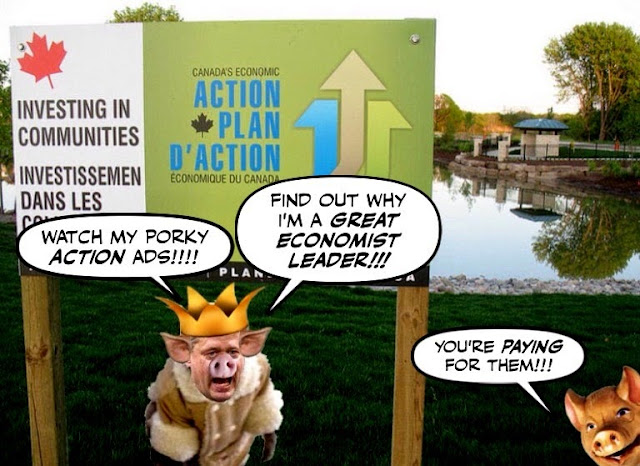 Stephen Harper and his  Cons have spent almost a billion dollars of our tax dollars on their Porky Action Ads.

It's the most outrageous mass brainwashing project this country and any other modern democracy has ever seen.

One you can't escape because those ads are EVERYWHERE.

And although they are riddled with lies and nothing but partisan propaganda, they are helping the Cons stay competitive, despite their appalling economic record.

So I'm glad to see that one of the progressive parties has finally struck back...

And although it's not the most hard hitting ad I've ever seen. And I might do things a little differently. Ahem.

Like add some sounds of Con hogs at the trough, or the heavy breathing of an aroused Stephen Harper, or the grunting of an inflamed Roxanne James.

It's timing couldn't be better.

Because the Cons are using some of the $7.5 million dollars they just gave themselves to promote their lousy budget, to bombard playoff hockey fans with those porky ads.

And since polls show that with the exception of the hopelessly partisan and the terminally dumb most Canadians HATE them.

That ad can only help remind hockey fans why they hate them so much, and how the Cons are wasting OUR tax dollars.

Which can only undermine Stephen Harper's message... 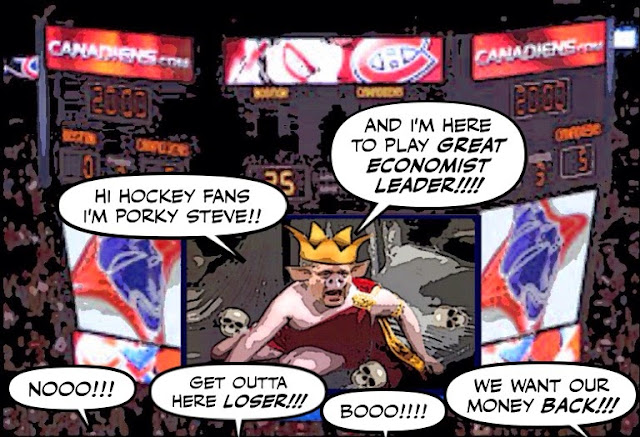 And make him look even more like a porky Con artist. If that's possible.

So good for the Liberals, and let's see more of those kinds of ads from all the progressive parties.

Because I will NEVER understand why in a country whose people spend more hours on the internet than any others, we aren't using more YouTube attack ads to pound the Cons into submission.

But better late than never .

And while we wait for others to arrive, here's a video I made a couple of years ago after the Cons had to pull one of their ads because it was too FRAUDULENT to ignore.

Which although it isn't exactly Hitchcock, or Fellini as I had hoped.

Does have some great porky sounds...

Yup. Pound those porky Con propaganda artists like they deserve to be pounded.

Give them a taste of their own medicine.

Expose them for what they are... 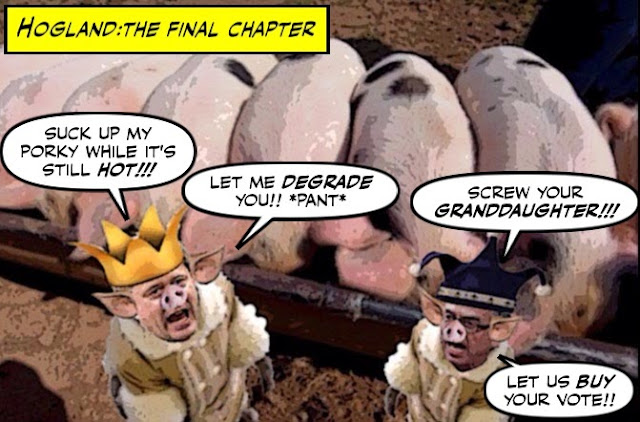 The filthiest, grubbiest, most dishonest government in Canadian history.

Who for the sake of human decency, and the honour of this nation.

It's about time they started informing Canadians on exactly how much of their own money has been stolen from them just so Harper can smear lipstick all over their oily hides. These criminals are shutting down coast guard stations, laying off food inspectors and scientists yet there's always money available for these blatantly partisan ads. The depths that this sleazeball Harper will go to to get re-elected seem to have no limits, much like the budget for this propaganda bullshit.
Believe--Heave--Steve

hi David...thanks for the links. I've saved the one of Oliver on the Amanda Lang show for use in my own videos. For we will have fun with this one....

hi anon...yes it is about time, we progressives have been far too passive. We've been hit by a billion dollars worth of propaganda and haven't even returned fire. YouTube videos are relatively cheap to produce (and in my case very cheap ugh) We are more than them, and more creative so what the hell are we waiting for? If we're waiting for the campaign to begin I've got news for our organizers. It's already started and the Cons are already campaigning flat out. we live in an internet and video age and it's time the smelled the coffee and start being more aggressive...

I do not consider myself 'hopelessly partisan' or 'terminally dumb'. For once, I would like to see an ad that shows a positive message to all Canadians that we are all in this together in these trying times and no one person is any better than their neighbour. I can only hope!

Note to my fellow seniors: Before we grab happily at the conservative hand out to buy our votes we should think about what we get from the system and how it gets paid for. Seniors are the biggest users of the very expensive health care system. What happens if great amounts of dollars are taken away from it. Which is what Stephen harper is planning. Privatization. Or there is an outbreak of food borne illness and no money for inspectors. Or our OAS is cut back. We rely on government very much. Let's make sure there are tax dollars to support it.

If I could I would make a video to show what will happen to seniors if there are not enough taxes to keep the health care system funded.

@ Kathleen You got the "Right Attitude" lady or should I simply have said "The Right Stuff"?