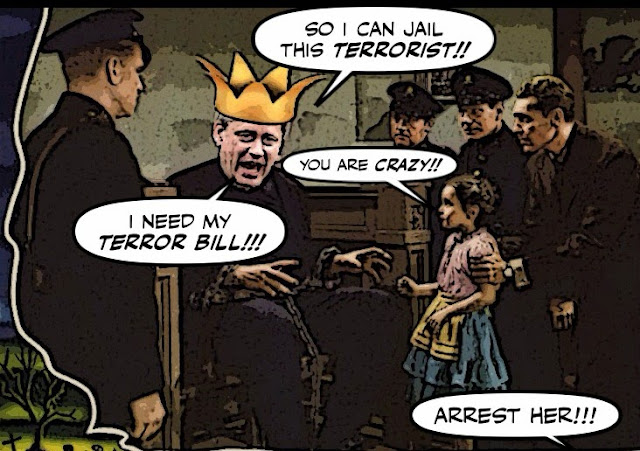 He must be so excited. In just a few more days his monstrous anti-terrorist bill C-51 will become law, Canada will become a police state.

And he can start going after all his enemies real or imagined. For by now in the final stages of his mental and moral degeneration, his paranoia knows no limit.

And his depraved desire to jail even more Canadians can barely be restrained.

But if he thinks he is going to get away with it he is sadly mistaken, as tens of thousands of people all over Canada made clear again yesterday. 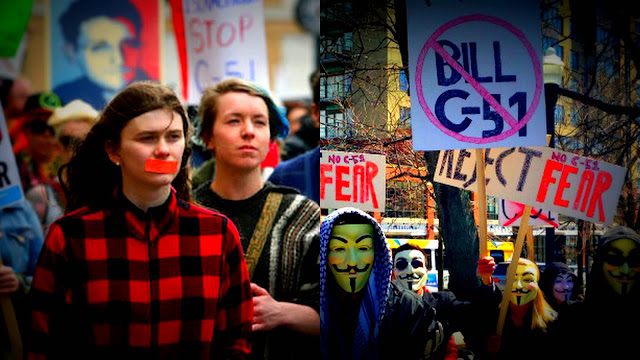 Protesters gathered in cities across Canada on Saturday to rally against the government's proposed anti-terror legislation, just days before the bill could face a final vote in the House of Commons. Rallies against Bill C-51, which seeks to expand the powers of police and spy agencies, took place in many cities including Halifax, Ottawa, Windsor, Winnipeg, Calgary, Edmonton, Vancouver and Victoria.

But although it is encouraging to see so many Canadians finally standing up for their rights,

He will ram his bill through, like a bestial bully assaults his victims. And our country will never be the same.

Because as the Americans are finding out, when you build a national security state it tends to grow out control. 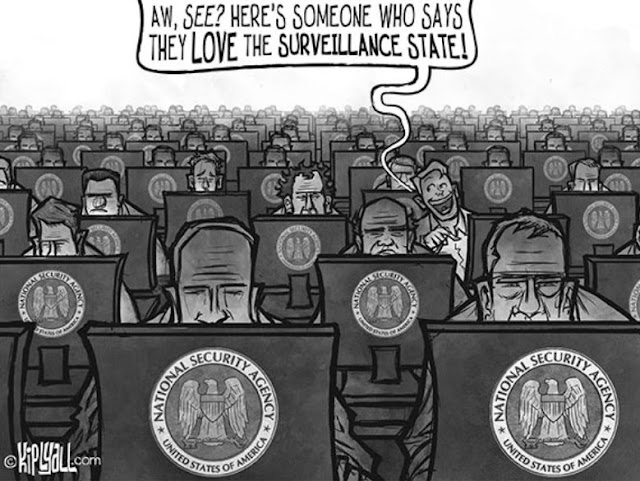 When any crisis, problem, snafu or set of uncomfortable feelings, fears, or acts arises, including those by tiny groups of disturbed people or what are now called “lone wolf” terrorists, there is only one imaginable response: more money, more infrastructure, more private contractors, more surveillance, more weaponry, and more war. On a range of subjects, our post-9/11 experience should have taught us that this – whatever it is we’re doing — is no solution to anything, but no such luck.

More tax dollars consumed, more intrusions in our lives, the further militarization of the country, the dispatching of some part of the U.S. military to yet another country, the enshrining of war or war-like actions as the option of choice — this, by now, is a way of life.

Even when it's such an obvious failure:

Imagine that the government suddenly decided to build high-tech shark fences off every American beach to protect bathers from another kind of headline-inducing predator which strikes even more rarely than terrorists. Imagine as well that an enormous bureaucracy was created to construct and oversee the maintenance of those fences and the launching of armed patrols to take out the global shark population.

And imagine as well that the result was a rise in the threat of shark attacks off those coasts, as well as endless claims from the officials in that bureaucracy that they were doing a completely bang-up job. Wouldn’t their word be doubted? Wouldn’t the whole program be reconsidered? Wouldn’t there be a debate in this country about what it means to be safe and secure, and about where our tax dollars were going?

But then Stephen Harper doesn't care about that. All he's interested in doing is using fear and intimidation to try to win himself another bloody majority... 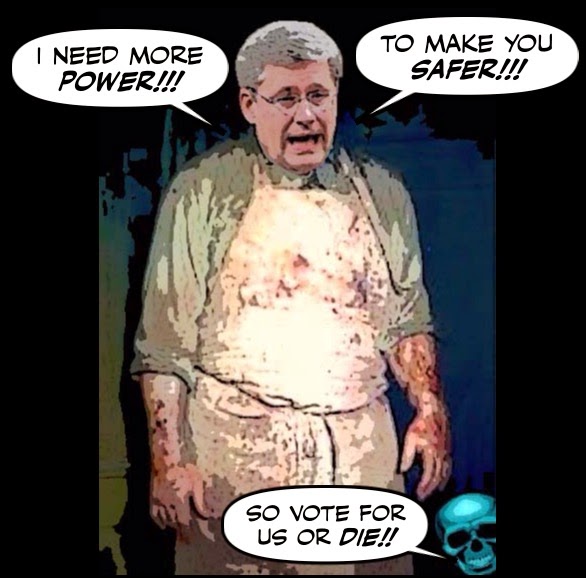 So he can continue assaulting this country and its values beyond recognition.

And so depraved is his kinky desire to jail Canadians, that he's even arranging a virtual tour of one of his prisons.

An online virtual tour of federal penitentiaries, produced by Correctional Service Canada is being welcomed as an attempt at openness, but also criticized for offering a "sanitized" view of prisons that glosses over the crowded conditions and lack of programming.

No doubt so he can show his enemies where they'll soon be living... 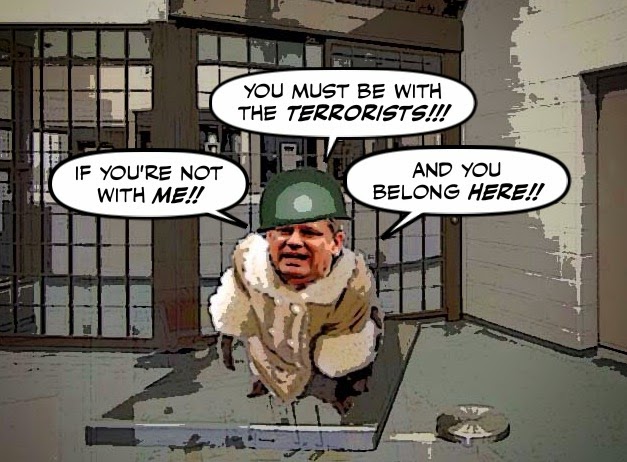 Even if like everything else he does, it's just a Potemkin village, or a Potemkin prison, as phony as the man himself.

Justin Piché, assistant professor of criminology at the University of Ottawa, called the production "beyond belief."

This sanitized portrayal shows us minimum, medium and maximum security cells — not one of which is double-bunked at a time when nearly 20 per cent of federal prisoners share a space the size of an average household washroom with another prisoner."

And the ugly reality of the Collins Bay institution looks a lot different than that virtual tour.

But that's our Steve,  Ol' Handcuffs Harper, the most warped and weird Prime Minister  this country has ever known.

And at least now there can be no doubt where he would take us.

Just like there can be no doubt what we must do.

Organize, unite, and defeat that monster.

And send him to the place he belongs.

Before he turns our Canada into his perverted playground... 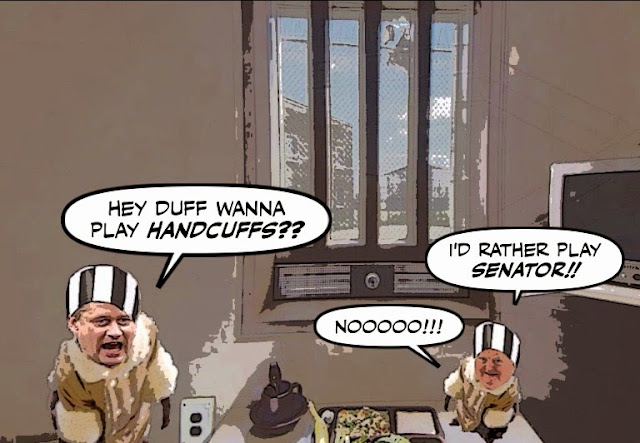 A bullshit law for a bullshit problem.

It really is all about keeping the bulk of the people afraid and docile, while at the same time, keeping activists afraid of different things.

Don't forget how he is sending our soldiers to train an army filled with Neo Nazis. It bears repeating again and again. That's what my two older brothers served in WW11 to defeat.

Actually it is an imaginary law made up in Harper's twisted mind it will never ever pass a constitutional challenge in The Supreme Court sorry Steve Joe Harper you have failed again. I heard you failed first grade like ten times is that true? So you were like sixteen when you finally made it to second grade? When your peers were already in high school. No wonder you do not have any self respect Steve you have been a loser all along.
But you did manage to get American muscle power and money to get you where you do not belong. Because they love idiots...

when this bill is passed into "law" we can only hope we at least get sent to the same prison to keep each other company.

This bill is all about controlling Canadians when the Communist government of China starts flexing its muscle in Canada. They will not want protestors and with the new law, we the protestors can be thrown in jail, well at least the leaders will be. How to turn a country into terrorists in one easy step. It must be what big business wants because they aren't too adverse to any of this.

Perhaps its time to move to Cuba. With regular flights it will be easy.

Comment for your newest post. Great article in the Tyee about how Canada used to borrow from the Bank of Canada until the business was given to the private banks. this needs to be noised about the land. Can't comment any more. Don't know what url is. Old woman. Not at all tech savy.

hi thwap...yes that sums it up perfectly. Stephen Harper is a ghastly bully and intimidation is his modus operandi. He himself once admitted he likes to see fear in the eyes of others, and this is just more of the same...

hi anon...yes I've mentioned that before and I will mention it again. And nothing can change the fact that his Ukraine Expeditionary Force is not helping solve a dangerous crisis, and has been mounted with great and absurd fanfare for crass political purposes....

hi Mogs...yes the bill will be challenged in the courts, but that will take time, and as that article I linked to points out, once you install a security state it's awfully difficult to take it back. Also, Stephen Harper was a good student, who thought he was a genius. Until the day his school went on Reach for the Top, and he was humiliated beyond belief. You might think that might have taught him to be a little more modest, but sadly it didn't...

hi e.a.f....yes that would be a consolation, and if we get all progressives in the same place, we might actually be able to unite them ;) But I find Harper's prison fetish deeply disturbing, especially since even the Americans have realized things like mandatory sentences are a big mistake. And I dream of the day when he can get a dose of his own medicine...

hi David...thanks for the links. It's important to get the facts out, because as you know the more people know what's in the bill, the more they dislike it...

hi anon...yes I've heard about that, and yes government is becoming more and more of a tool for big business. They have completely corrupted the political process in the U.S., and if we are not careful the same thing will happen here. Remember, if it had been up to Harper we would have de-regulated our banks, and the recession in this country would have been even more catastrophic. The URL is just another name for the link to every story on the internet, the one that starts with a WWW or an http or something similar. Just cut and paste that and you can share the story with anyone you want. But then for an "old woman", you don't seem to be doing too badly...;)

Yes I was merely making a joke I did not know about that reach for the top crap. I had to much self discipline and self respect to ever enter a clown gong show like that. I remember watching it as a kid once or twice and thinking what a waste of time. I guess Steve having been humiliated tells the story of why he rose to the top and humiliated all Canadians and Canada as well. Its called cold callous revenge just because he failed on a stupid entertainment show? WTF?