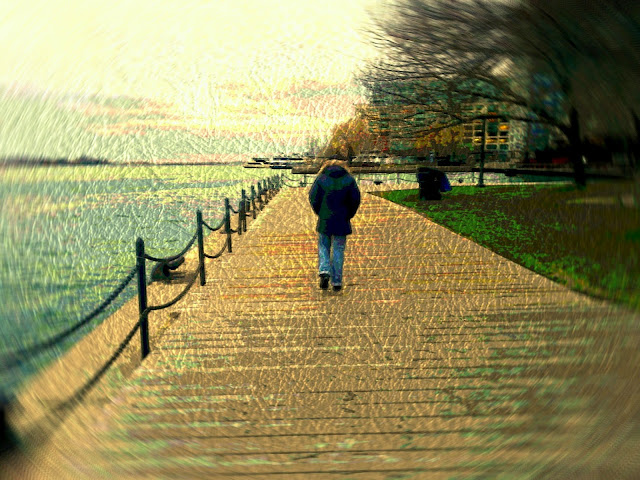 It's been a cold miserable spring that feels more like fall. After the winter from hell.

And it is Harperland.

Where a depraved would be dictator is trying to buy the next election, turn us into a police state, and lead us into one war after the other.

After running the economy into the ground, and doing his best to torch the planet.

So I must say I was surprised to see that so many Canadians are so happy.

Move over Pharrell Williams, because we’re happy too. According to a couple of surveys released this week, Canadians are a pretty happy lot.

According to the World Happiness Report, Canada ranks as the 5th happiest country on the planet. Not bad considering there are 158 countries on the list.

And even more shocked to see Stephen Harper looking so happy... 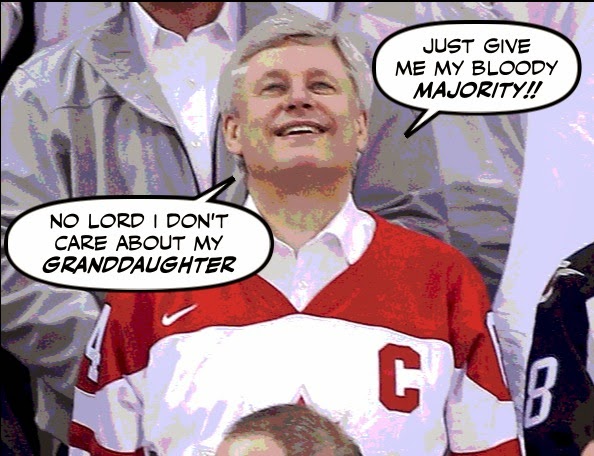 In a crazy sort of way.

Even after what Joe Oliver did to him and his porky tax plan. By suggesting he's prepared to mortgage his even his granddaughter's future, to win the next election.

So I was glad to see that his happy photo-op did end badly.

Prime Minister Stephen Harper says he wore a red and white Team Canada jersey amid a sea of Winnipeg Jets fans decked out in white because he didn't have a Jets jersey to wear to the playoff game.

But shortly after the news conference Thursday when he said that, a tweet appeared with a photo of him wearing a white Winnipeg Jets jersey while standing next to Winnipeg South Centre MP Joyce Bateman.

When he was caught lying. Again.

But then maybe John Ivison is right, for once.

Maybe Harper has read the same poll, and is trying to put on his happy face. 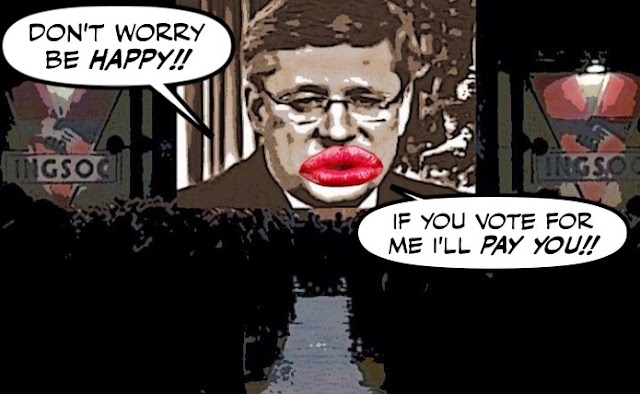 Most Canadians probably think Stephen Harper smiles when he wakes up in the morning, just to get it over with. Previous elections have seen him campaign as the Eeyore of Canadian politics, spreading gloom and fear about the nightmare voters would endure if they elected a Stéphane Dion, Michael Ignatieff or Jack Layton.

Yet overnight, he seems to have been reborn as Ronald Reagan, a sunny optimist trying to bolster the collective spirits of the nation.

Or pose as Mr Sunshine.

I suspect we have the kernel of a Conservative “hope trumps fear” campaign. It may be counter-intuitive but then how often can you claim the other guys are too risky to give them a shot?

The Conservatives appear to have judged there is austerity fatigue and that people want to feel good about themselves again. 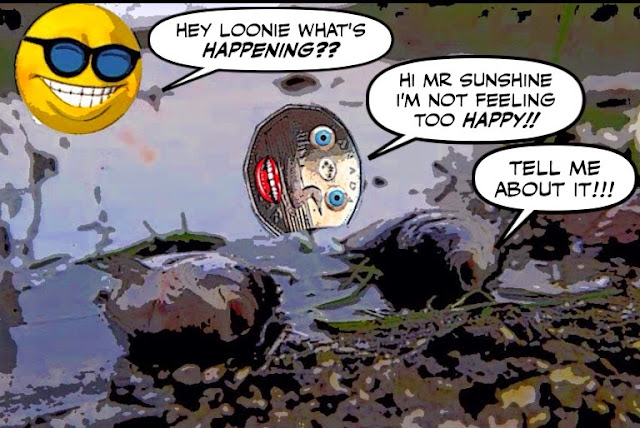 “People should be confident about the future,” he said in Winnipeg, on the day it was revealed that employment insurance claims in Alberta rose 30 per cent in February.

But if that is indeed his new strategy all I can say is good luck.

Because I can't imagine it will work for him.

Not when if he is going to pose as a champion of hope over fear, he's going to need more make-up than even Ol' Duff can slather on him... 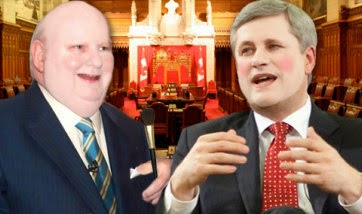 Not when he has driven the economy into the ground. And the situation in Alberta couldn't be more desperate.

The latest numbers on jobless benefits paint a brutal picture for oil-shocked Alberta. Indeed, Statistics Canada said today, these numbers for benefits under Canada’s Employment Insurance program are running up at the ugliest pace since the recession. And it’s going to get worse, observers warn 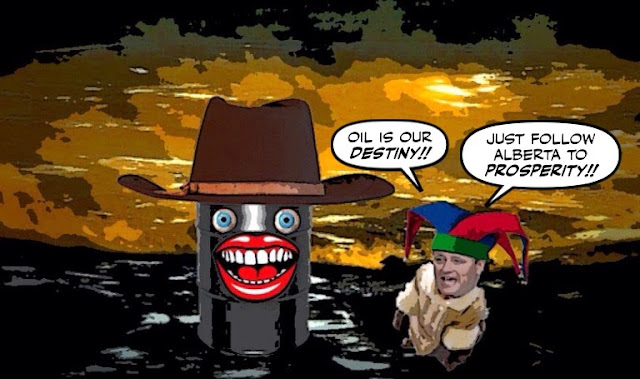 And he couldn't look more incompetent.

And not when, as Chantale Hebert points out, even his sunny porky budget won't save him.

With this budget, the Conservatives are hoping to bring back under their tent the voters who supported them four years ago but have since gone missing in the polls. Many of them were Liberal sympathizers unhappy with Michael Ignatieff’s campaign.

More than a few have come home since Justin Trudeau became party leader. If they voted for Paul Martin or Jean Chrétien in the past, chances are those swing voters still believe in a more activist government than Harper is offering in this bare-cupboard budget.

And of course, not when he's still trying to turn us into a police state, and this is still Harperland... 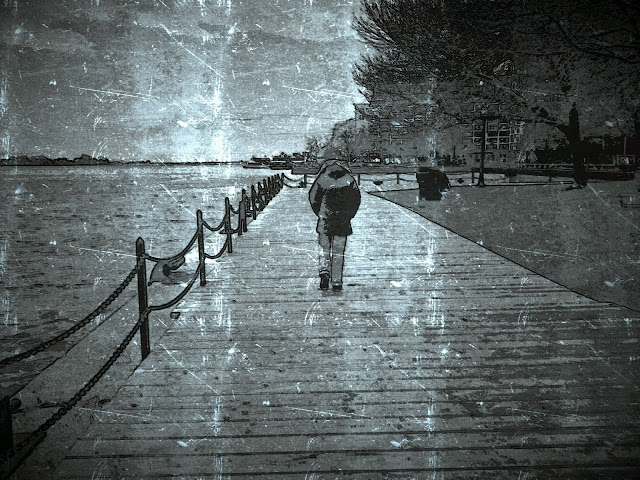 A grim, dark place where moral depravity reigns, and the Big Lie rules. And even a person like me sometimes feels like giving up.

But the reason I don't is because I told you we would be on this journey together until the day the tyrant is defeated, and I could never break that promise.

And because I know that if Stephen Harper is trying to portray himself as Mr Sunshine he must be REALLY crazy desperate.

And that the sun will rise again.

When this monster is finally gone... 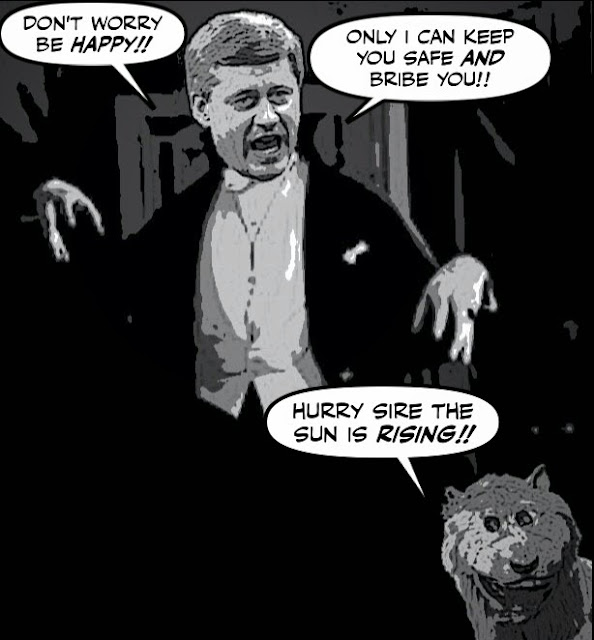 And yes, for our sake, and our country's sake.

Perhaps we should call mr happy face karma camelion he seems to do an about face each time his failed ideas, fail again. The embarrassing road to non-existant oil riches, the slow and painful death of good paying jobs in central Canada, the trumped up fear card on would-be ISIS (or is it ISIL these days) terrorists out to hate us for our freedoms, the ridiculous government advertising and the latest sham budget that yet again, drains government revenue to benefit a small pocket of Canadians. The man knows no shame and must be defeated, can we do it?

Thank you to the person who gave me the name of the group pushing to have the country borrow from the
Bank of Canada again, not private banks, as the country did pre 1970s. It is COMER (Committee on Monetary and Economic Reform) for those who might like to look into it.

Mr Sunshine he ain't. The only thing warm and fuzzy about Harper that I can think of is what my cat(Duff) just left in her litter box. Another strange coincidence is how she emulates Harper's "singing" when she's in heat. She's a good little Duff though and sadly, her singing career will be over next week when she gets fixed.
JD

In 2011, widespread disillusionment with neo-liberalism mad lots of Canadians willing to give the radical socialist NDP a chance. (After decades of Liberal Party austerity, cuts and lies.) I don't think the NDP will win in Alberta, but their surge in the polls there is indicative that any people are seeing through the intellectual bankruptcy of Canadian Conservatism.

I hope and pray that this disillusionment is stronger than the temporary buzz of harper's bullshit tax-cuts. If things are so bad that harper is losing support in Alberta, ... he won't be able to convincingly steal the next election.

Simon: He won't be smiling for long. The NDP will likely do very well in Oilberta, perhaps even form government there. Especially since it appears that even Danielle Smith thought that Notley had won the debate last night. Seems even in Alberta, you can't fool all the people, all the time, eh? Wonder if Smith might vote for the NDP after what Prentice had done to her political career?

Imagine what a different political landscape going into the federal election it would be if the Alberta PC were to be tossed out after 43 years? Bet it must drive Closet Leader insane just thinking about it.

Actually, politically, I think it was a big mistake for Closet Leader to have announced major pieces of this budget since last Fall. By the time he the major items were confirmed last week, it already seemed like old news. Worse, it gave the opposition and the media, a long time to ponder the weaknesses and to inform the public about them.

And that gaffe by Oliver about leaving the costs of funding TFSA to future generations was of course a God-sent, eh?

Well Simon Mr Dress-up again notice the C on his shoulder? Yes he is pretending to be captain Canada. He may be hiring William Shatner to run his election campaign.

This just in : Omar On The Loose ... Harper Runs To Closet ... Ratsign Flashed to Harper Mother ... Bring Clean Underwear.

I hope Rachel upsets the apple cart in Alberta.....just because!

hi bcwaterboy....yes the Cons do seem to mutate like viruses, but as you point out it really is a farce, and it is only because they are desperate. As to whether we can defeat them I still think we can, but the progressive parties have to be much more aggressive and find new ways to get their messages out. Because right now we seem to be sleepwalking towards the next election, even though let's not forget it could come anytime...

hi JD...yes he certainly isn't Mr Sunshine, and the very thought makes me howl with laughter. Although the thought of Harper howling in heat is rather terrifying.. And sadly we can't get him fixed...;)

hi thwap...if the NDP does well in Alberta I believe that will have a huge influence on the federal election campaign. Because we will be able to say that if Albertans can vote for the NDP in large numbers so can Canadians everywhere. And I must say I'm very impressed with the NDP leader in that province. If I was Tom Mulcair I would be worried...

hi anon...I'm sure you're right Harper must be very worried about what's going on in Alberta. In fact I get the feeling that a lot of what he's been saying recently is aimed at that province more than it is at the rest of Canada. And an NDP victory would just about kill him. He had to divide his attention between attacking the Ontario Liberals and the NDP in Alberta, and that should be enough to drive him over the edge.
And as for Oliver's gaffe, that won't help him either, because we can use that to help undermine his low tax mantra, which at the present time is just about all he has going for him...

hi Mogs...yes I should have pointed that out, the reason he chose that jersey is because he wanted to stick out, as Captain Canada. The man is such a liar...

hi rumleyfips...yes I saw that Omar Khadr is finally going to be released, and how the Cons are trying to keep him in jail, not only to pleasure his base, but also so he can't sue the Con regime and they depraved leader. I believe he's asking for about $20 million, which seems reasonable considering the shabby way he was treated...

hi Steve...yes incompetent AND arrogant, there couldn't be a worst mixture...

Hi Simon not not only is he a compulsive chronic liar [def: chronic lying in adults is often a manifestation of antisocial personality disorder] he is also a pretender and a closet Queen coward.

Check out this pic:

Bout sums up Harper have a good belly laugh :)