Why the Duffy Trial is Also the Trial of Stephen Harper 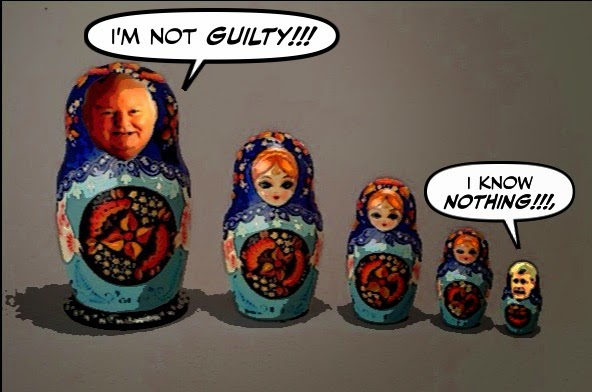 Sometimes I think that the Mike Duffy trial is like one of those Russian nesting dolls, with Duffy as the biggest doll hiding all those other scandals inside it.

Which is unfortunate, because it might give people the impression that it's all about Ol' Duff and his dubious activities.

When in fact it's turning into a trial of the Senate AND the trial of Stephen Harper.

Who as Tom Mulcair pointed out yesterday, is at the very heart of the scandal.

An attempted coverup of Sen. Mike Duffy's residency issues was all about the prime minister trying to protect his own reputation, opposition leader Tom Mulcair said Wednesday.

And this whole scandal is and has always been an attempt to cover-up Harper's original sin: Bending the rules to pass Duffy off as the senator from P.E.I.

So he could become a Con bagman... 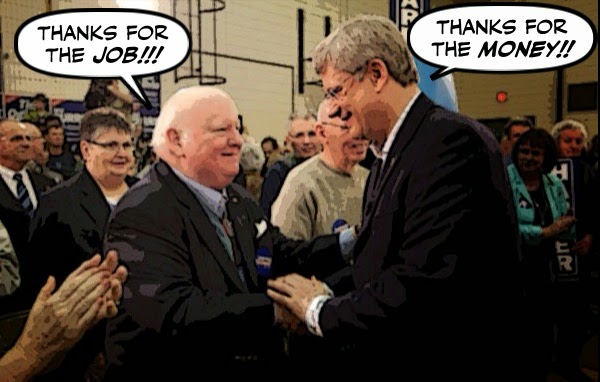 Which needless to say is NOT the image he wants to project at this time. So his PMO flunkies are now running around frantically, furiously but anonymously denying the story.

A Conservative source says allegations that Mike Duffy asked Prime Minister Stephen Harper if he could represent Ontario instead of Prince Edward Island as a senator are completely false. Duffy has told people close to him that, prior to his appointment, he asked Harper if he could represent Ontario rather than his native province because he had not lived on the island for decades.

But a source says Duffy never asked Harper that question, or expressed concern about the appointment.

Even though it's just an obvious attempt to deflect the blame.

When it's Stephen Harper who should have been asking questions before he appointed Duffy.

And should never have made him the Senator from P.E.I. when he knew Duffy had lived in Ottawa for FORTY years... 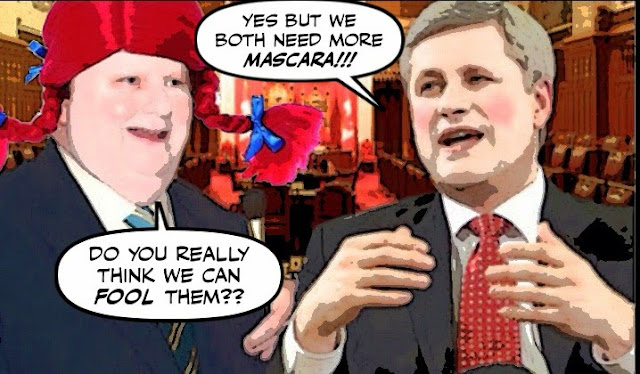 Just like he never should have appointed his VERY good friend Carolyn Stewart Olsen a Senator, as Mulcair also pointed out,

"How is it possible to go after Mike Duffy when someone like (Senator) Carolyn Stewart Olsen was named in exactly the same circumstances?" said Mulcair. After Stewart Olsen's appointment to represent New Brunswick in 2009, she too filed expense claims for an Ottawa home she already lived in.

His former communications adviser who is so close to him she is one of the few people who can walk into Harper's office anytime she likes... 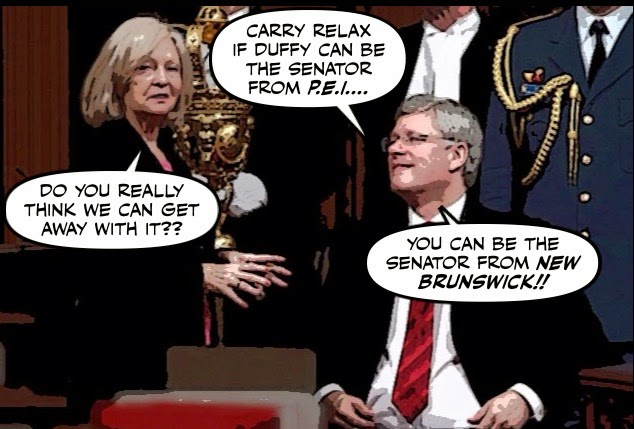 And when she is called to testify will help Canadians understand what this scandal is really all about.

Neither Mr. Harper or a single Conservative member of Parliament have apologized to Canadians for their actions, which were improper and immoral right from the day Stephen Harper appointed Mr. Duffy to the Senate.

A desperate attempt to cover up Harper's original sin, by making Duffy look like the only villain. Or a cheap chiseller, instead of their once golden fundraiser.

And with the trial now expected to continue well into the next election campaign, and Harper increasingly seen to be at the heart of the scandal, and the cover-up.. 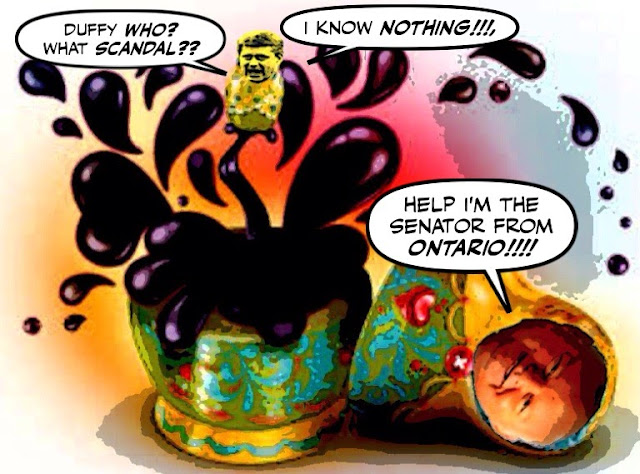 That can only hurt him.

You know today is Harper's birthday, and the PMO wants us all to celebrate the happy event.

But I don't think Stephen Harper will be celebrating for long.

Because he must surely know by now.

That he did create his own monster.

But he will not escape his scandal... 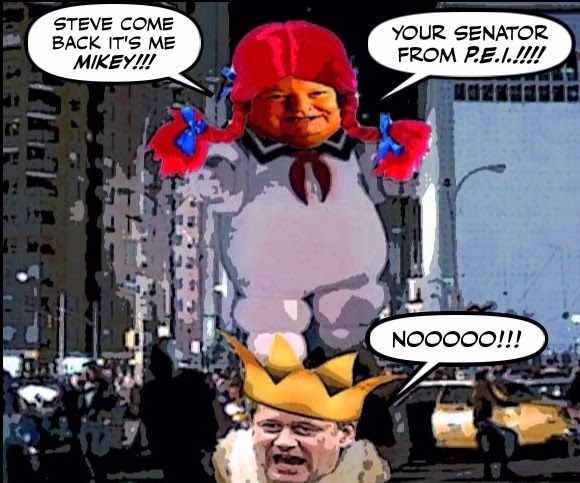 It should be the LAST birthday he has before he's removed from power and then hauled into inquiry after inquiry to account for his serial crimes against democracy.

Here in BC we had the infamous BASI/VIRK trial that was going to expose all sorts of vile secrets...

Judge agrees to a halt in proceedings so everybody can get their stuff together for one big push to the end...

BINGO! Trial ends on dubious grounds and all the major players go on to have 'interesting' careers

So, Good Luck with that Duffy thing you got going there..

Half my comments disappear due to poor ID confirmation . I find it frustrating to have to retype comments because the originals disappear.

Having sais that. The lies from the short pants shitheads in the PMO are predictable. The surprise is the leakage in the SS Crime Minister. Some party insiders are nolonger intimidated by his bullying but are ahead of the voters on Heaving Steve.

rumleyfips tip here I've learned to high light my comments then go control c which is a shortcut for copying prior to posting. Then if my comment disappears the next shortcut I use is control v that pastes your copied text back. Hope this helps you, you won't have to retype a good thought. I agree the wind of change is to heave Steve.

Simon Steve is under the "gun" so to speak he ain't gonna get away with his BS because his BS is now over his head he is drowning in it.

When you tell your Christian base you are a teetotaler and yet there is hundred of photos of you drinking [mostly beer] on the internet anyone can access there is something seriously wrong. I think Christians do not want to know the truth because they can't handle it!

I hope you''re right. But I fear that he may be able to buy the election. Unfortunately many Canadians can be bought

At some level the cons must be concerned. They are looking at the NDP and the office for the NDP workers union in the NDP's office. Well it might come as a surprise to the cons, but some employers do provide space for the union representing their workers, to have space at the work site. Now the cons need to get over it. Unfortunately the Liberals want to get on this band wagon, to give their leader a boost. Wait for more mud to be slung.

Yes, those of us in B.C. all know how the Basi/Verk/B.C. Rail trail ended and all the "secrets" which, in my opinion got covered up. I expect the same to happen in the Duffy trial. All the B.C. Lieberals did was change leaders and win another majority. There were whole blogs which covered that fun time. what did the premier of the time get, el gordo, a nice trip to London at the tax payer's expense and he's still there. Only punishment is, he had to take his wife. Our current premier was in the room when some of that started to go down, as a cabinet minister. and it seems although B.C. Lieberals are "named" liberal, I would suggest they are much closer to the federal conservatives. Like how many premiers get a retirement to London, at tax payers expense with chauffeurs, etc. No in the end el gordo and Christy did well. the 2 staffers escaped by the skin of their teeth, with no financial obligations and life went on. Perhaps stevereno comes out to consult with Christy from time to time about how to get out of the duffy mess like the b.c. leiberals did.

this morning's military sexual harassment press conference. there the military leaders were skating along. you'd think with steve's interest in all things military, that problem would have been solved years ago, under his watch. Steve doesn't care about First Nations women, now we can see he didn't care about military women either, not to say the sexual harassment and assault was restricted to females.

In B.C. some voters have received an anti Trudeau post card with a picture of what is alleged to be an "aborted" fetus and Trudeau. The Vancouver South Con M.P. Wai Young denies all knowledge and says she opposes such actions, but we know that her riding isn't as secure as she would like it to be. It is alleged the post cards are being put out by an "independent" organization. What I'd like to know if these post cards will be delivered in ridings which are "solid".

Sooner or later, all will be revealed about Harper's tactics. Harper may be sure that his sin will find him out.
Remember Nixon. It wasn't the break-in of the Democratic headquarters that finally did Nixon in. It was his attempt to cover it up.

"Pride goes before destruction, a haughty spirit before a fall." (Proverbs 16:18)