Stephen Harper's Plan to Brainwash Us Beyond Recognition 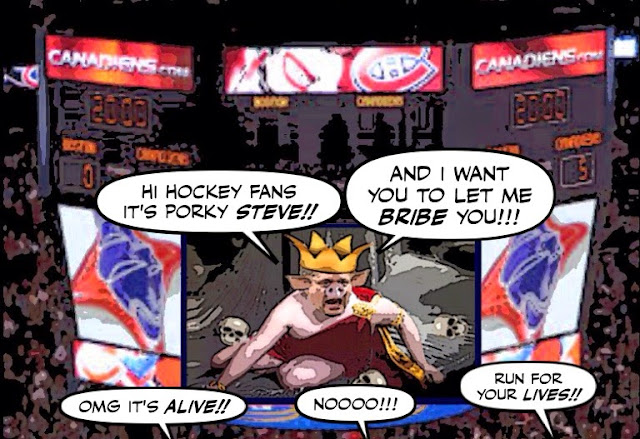 We knew the Cons are already spending $7.5 million dollars of OUR money to promote their smoke and mirrors budget.

To remind Canadians that many of them can expect a cheque in the mail if they vote for them.

And to try to brainwash Canadians into believing that Stephen Harper is a Great Economist Leader.

But it turns out, no doubt because of the way he has driven the economy into the ground, that won't be enough.

So the Cons are throwing in millions of their own dollars, to try to brainwash us, or blitz us, beyond recognition.

The Conservative government has booked $13.5 million for an all-out, co-ordinated blitz in April and May to advertise its 2015 pre-election budget.

The push, detailed in internal government documents obtained by The Canadian Press, builds on existing Finance Canada and Canada Revenue Agency campaigns to promote Conservative tax measures both past and proposed -- the backbone of the Harper government's re-election strategy.

Because let's face it, $21 million dollars worth of porky ads in just two months will make them almost impossible to avoid... 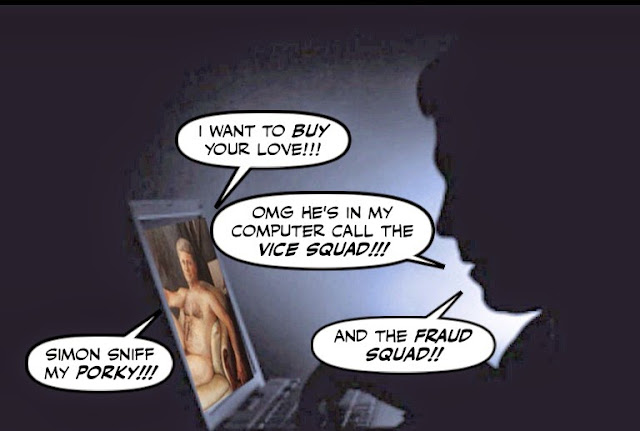 And should be enough to make us the most brainwashed people on earth, after the North Koreans.

Whose propaganda machine the Cons seem to be eerily imitating.

Especially when they conflate the economy and the military...

And the regime is also running this so-called recruiting ad over and over again...

Which echoes Harper's hollow slogans of "freedom" and "values" while spending MILLIONS to fill only 100 positions.

And what makes this totalitarian propaganda offensive even more disgusting, is that just like they are calling that Harper's Army propaganda a recruiting ad.

Cons like Pierre Poilievre are claiming that their brainwashing blitz is merely educational.... 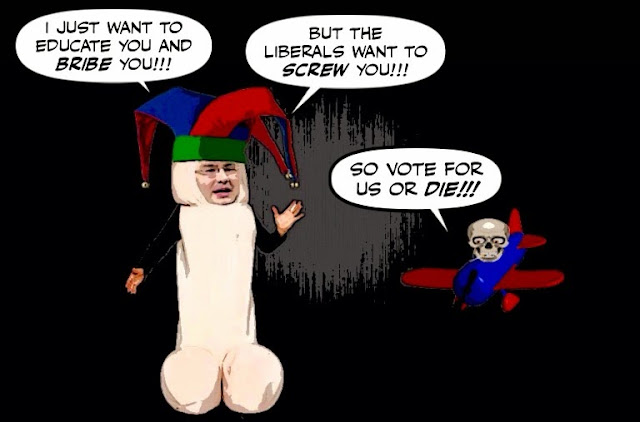 The government has a responsibility to tell Canadians about tax measures, countered Labour Minister Pierre Poilievre. Some 200,000 eligible families must sign up for enhanced benefits in order "to get that July lump-sum payment," he said.

And that it's their duty to protect that bribe money from the Liberals.

"The Liberals don't want those parents to get any of that money," said Poilievre. "In fact, the Liberals would take it all away and that's why they're against us informing families that those benefits exist."

As only a low Con could.

But of course the most disturbing thing is that while the Harperites are bombarding us with ads, progressives are doing little or nothing to return the fire.

For as I said the other day, this ad might be a start...

But it's not nearly good enough.

This ad scores a 2/5. The sound effects do a good job implying spending and financial transactions, but the message is convoluted. This is not an easy subject to explain in a 30-second spot. But there are more effective ways to try.

And that's a problem, because polls suggest that even though it annoys a lot of Canadians, all that porky propaganda is having an effect.

We shall see that the incumbent has hung on to a narrow lead by virtue of better communications of its core values and plans. This is now rooted in clear ownership of major communication tools and clearer and more consistent messaging buttressed by the power of advertisement and publicity available to a government who chooses to appropriate those channels.

Making it look like the Cons have the clearest plan for the economy... 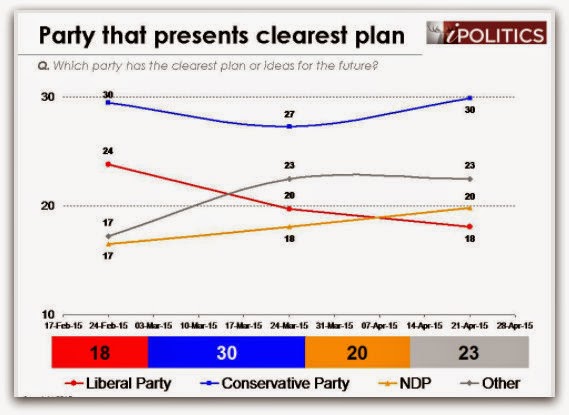 When in fact they don't. They've been sandbagged by falling oil prices, they're making it up as they go along. It is all smoke and mirrors, and a crass attempt to buy an election.

Even if it mortgages the future and leaves us with no money to pay for anything...even medicare.

But unless the progressive parties point this out, with their own propaganda offensive, the Cons will have the field all to themselves. And $21-million dollars of porky ads could do a lot of damage.

I realize we don't have the money the Cons have, but even a good YouTube campaign would be better than nothing.

As long as the message is as simple, or as brutal as possible... 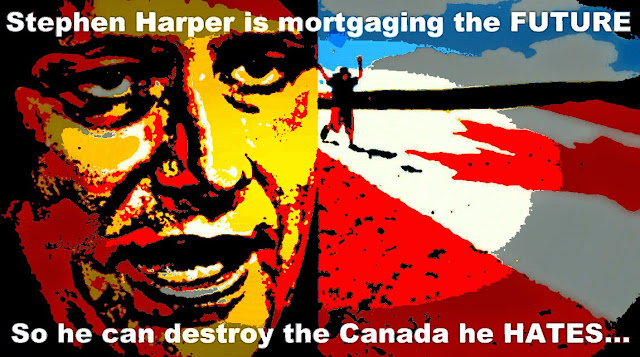 For now is not the time to hold back.

The next election will be the most fateful in Canadian history.

The monster must be defeated.

That Military ad should say we are proud to go and invade other countries that did us no harm come home wounded and thrown in a dumpster by Harper and his pals.

I don't think vets will be voting con cops unfortunately will they have never been on a gravy train like this they can do what ever the fuck they want and get away with it.

This 'Harper-con clown gong show' has spent more on advertising than any in history. So its fuck you vets seniors and disenfranchised I need your money to make me look like a champ at reach for the top.

Harper is beyond a pathological liar stage he has gone into what's called pseudologia fantastica. A severe psychological condition, similar to pathological lying, but different in the sense that the person afflicted genuinely believes their own lies. A person suffering from PF will often respond with anger, confusion and even violence when confronted about the truth of their statements. Hence the throwing of chairs in cabinet meetings. Need I say more? Okay how about his tantrums in foreign meetings? How about that Laureen Harper wants to stay as far away from him as possible? How about Ben Harper refusing to go to the Winnipeg Jets home game with him?

Sadly the list is endless the old Duffster got thrown in the dumpster as well. And he was one of Harper's top fundraisers. Tom Flanagan that created him and his con reform alliance also was tossed. Harper sadly enough needs to go into an institution offering shelter and support to people who are mentally ill.
"he'd been committed to an asylum"
synonyms psychiatric hospital, mental hospital, mental institution, mental asylum swoosh. I cant stand that man/boy cause he never really grew up or he would not be screwing Canada while amassing a five million dollar fortune off of our backs.

It should be easy for the PMO to rework some North Korean slogans for Harper's TV and radio ads:

"Long live the great victory in the war against Japan!"

"Long live the great victory in the war against ISIS, Russia, and eco-terrorists!"

North Korea publishes list of over 300 weird new patriotic slogans. What do they mean?
http://boingboing.net/2015/02/13/north-korea-just-published-thi.html

hi anon...yes I saw that, and I really don't know what to make of it. Because although I was caught up in that nightmare since I lived in the so-called security zone, I have always believed that Blair was not the one giving the orders. They came from people like Julian Fantino, the RCMP and the military in their headquarters about 100 kilometres from Toronto, and directly from the PMO. So I can't get too excited about that one...

hi Mogs...pseudologia fantastica? What a great expression I love it. But as for the military, when their propaganda matches the government's messagee, we are living in the anteroom of a police state so it is very, very disturbing. And another very good reason we absolutely have to get rid of those Cons...

@ Anon 6:02 AM I figured out what they meant in a heartbeat. One nice word describes all 300 weird slogans are you ready? Here it is:

gobbledygook...;) Kim must be proud to be so smart his brain is ready to implode.