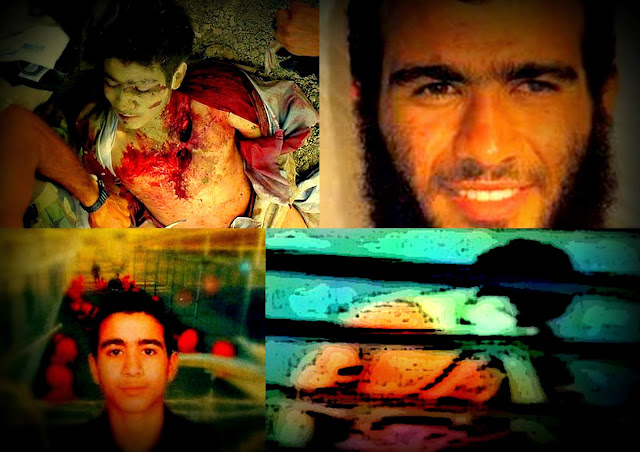 Over the last eight years I have written almost a hundred posts about the case of Omar Khadr, Canada's child soldier.

For I consider it one of the greatest cases of injustice in the history of this country, a shameful episode that should haunt us forever.

So you can imagine how I felt today when I read that he may finally be free.

An Alberta judge ordered convicted al-Qaeda terrorist Omar Khadr released on bail Friday morning, giving him his first taste of freedom since he was 15, when the U.S. military captured him in Afghanistan and then incarcerated him at Guantanamo Bay, Cuba.

Or how disgusted I was to read this:

Steven Blaney, the federal Public Safety Minister, said in a statement the government will appeal the release decision. “We are disappointed and will appeal this decision,” he said. “Our government will continue to work to combat the international jihadi movement, which has declared war on Canada and her allies.

Or see the Con hog Roxanne James on TV spouting bullshit out of every hairy orifice... 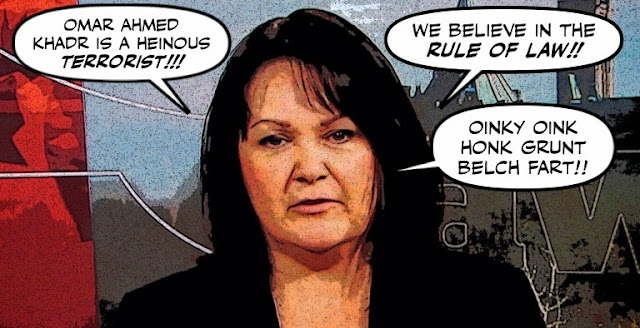 Unable to offer any reasons why Khadr shouldn't be released. But still doing her best to try to demonize Khadr like she once tried to demonize gay people.

When in fact Omar Khadr should never have spent a single day in jail for he was a child soldier according to the U.N. Protocol on the Treatment of Child Soldiers that we were the FIRST to sign.

Which dictates that child soldiers should be rehabilitated not punished.

He couldn't have killed that U.S. soldier for he was riddled with shrapnel and blind in one eye at the time that fatal grenade was thrown.

Before he was horribly wounded again... 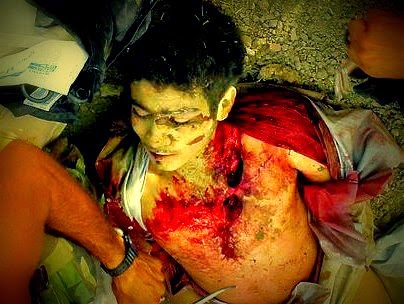 He never should have been tortured

Omar’s introduction to Bagram was harsher than that of most detainees. Begg said the guards singled him out for the worst treatment, payback for allegedly killing one of their own. They would make him perform Sisyphean tasks, such as stacking heavy boxes and crates that the guards would knock over when he had finished and then force him to start again.

Each time, they walked past his cell they would yell: Murderer! Killer! Butcher! “It was very, very hard to hear that because it was evident he was just a kid. Not only that, he was terribly wounded,” said Begg.

As he was at Bagram air base, then at that hell hole called Guantanamo.

His trial was a kangaroo court. A mixture of Orwell and Kafka. The fact that he was the only combatant in Afghanistan to be branded a "war criminal" is a travesty of justice. An absolute abomination.

And what makes it even worse, if that's possible, was that he was first betrayed by his own family, then by his own government, and then abandoned by many of his own people, just because they didn't like his crazy family.

And the only reason the Cons are appealing the release decision, is because they want to whip up Islamophobia for crass political reasons.

On Friday, James appeared on CBC TV to repeat again and again the government’s mantra: Khadr is a terrorist; the Harper Conservatives oppose terrorism. Therefore they oppose any court ruling that might give this Canadian, who has spent almost half his life in captivity, any kind of break.

Their message to the opposition: We’re out to screw this guy. Challenge us if you dare.

So they can create yet another wedge issue, and pleasure their rabid bloodthirsty base... 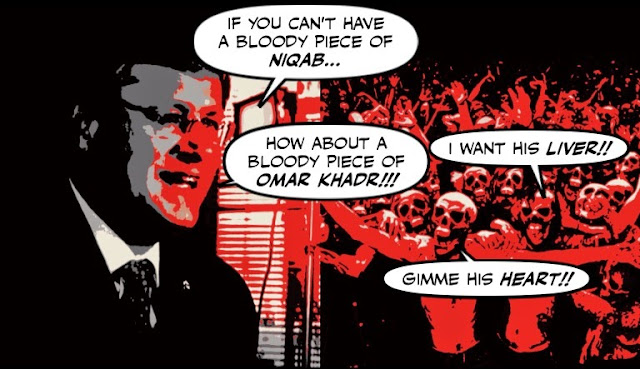 As they have been desperate to do since the phony niqab issue faded from view.

For they will do anything to win the next election, and they are the lowest, scummiest,     bigots this country has ever known.

Omar Khadr is despite everything that has been done to him, and according to all the guards and lawyers who have known him, a really nice guy... 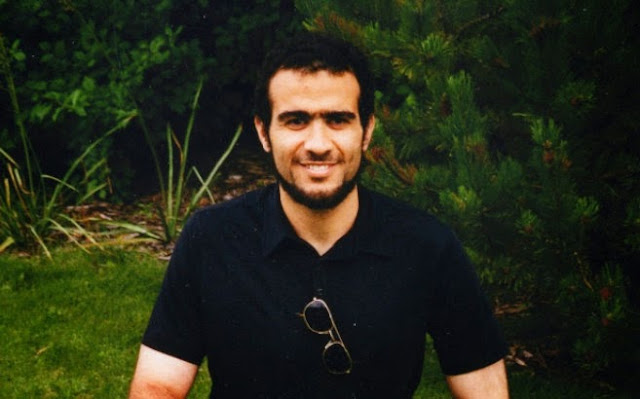 Not a terrorist, not a religious fanatic, but a gentle young Canadian who dreams of helping others, and being an artist. Even if he's slowly going blind.

And best news is that he will soon be free, at last.

As we will soon be free when we finally defeat those filthy Cons who would rape our Charter of Rights, and degrade our country in the eyes of the world.

And finally send their depraved leader back to the hell he came from... 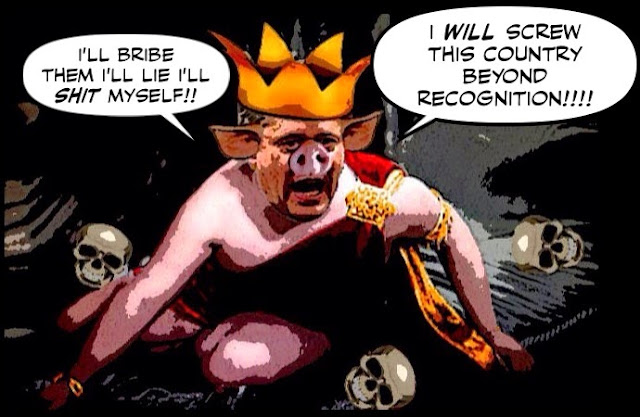 Totally agree - crass power politics: staying in power is all that matters, the rest is diversion and means to an end: staying power!

“It has been galling in the extreme to discover that those in other countries, who helped us overthrow our oppressive system of apartheid, should have no qualms it seems in employing the same discredited methods as those of a system they purported to oppose.

The point is that he was tried not in an open court, where he could been represented by a lawyer of his choice. This is apart from the fact that when he was arrested, he was only 15 years of age, a minor by every credible assessment and at the very least to have been charged as the minor that he was.

It is unconscionable that Khadr, following a travesty of a trial, where he was treated as an adult in a vicious kangaroo court, should be languishing in jail and that his own country Canada should be an accomplice in holding him in prison.

This is an example of a horrible miscarriage of justice and that in a modern democratic state.” - ARCHBISHOP DESMOND TUTU Nobel Lauriet

It appears a lot of positive things are happening in Alberta!

hi anon...I don't think you can be more of a foul bully than using a young Canadian who has been treated in such a cruel fashion for crass political purposes. It boggles the mind, and it couldn't be more disgusting...

hi Ben...well I'm a huge admirer of Desmond Tutu, a truly moral man who isn't afraid to speak out against injustice. And I have never seen such a horrible case of injustice as the case of Omar Khadr. I don't think it should be a partisan issue, and it disgusts me that the Cons are making it one. The fact is Khadr was a child soldier, a victim if ever there was one, and standing up for his human rights is the right and Canadians thing to do. Period....

That James woman is a horror. Omar is the same age as my grandson and I have nightmares about this sort of thing happening to boys of 15 and how easily they can be scapegoated.

Free Omar and charge his mother with child neglect and/or abuse. Maybe that will give the rednecks their pound of flesh.

Man oh man Simon the kid was caught up in a war zone and then roasted as a pig at a Hawaiian barbeque fest disgusting it is a testament to Khadr that he stayed alive and sane given the merciless punishment against him for no crime. He was G. W. Bush's poster boy for how a "terrorist" looks like and operates. Now he has become Steve's terrorist poster boy. Man when are they going to leave him be? He spent more than half his life incarcerated for doing nothing except being caught in the wrong place at the wrong time so that is now a crime?

Disgusting these Harper-cons they should go to Guantanamo prison and see how long they last before they break down, my opinion.

hi anon...yes James is a horrible Con, and let's not forget how she treated witnesses at the C-51 hearings,all but accusing the of being terrorists themselves. In the TV interview I saw she kept referring to Omar as Omar Ahmed Khadr, just like the tea baggers in the U.S. call Obama Barack Hussein Obama, to remind people he's a Muslim, so you know where she's coming from. He boss steve Blaney is just as bad, and they are all an absolute disgrace...

hi John....well it was really his father who got them all into trouble by dragging them off to Afghanistan and taking Omar out of Toronto where he was just another Canadian kid enjoying life here. I long for this tragedy to be over, and I'm just glad that Omar has been able to come out of it so strong and so well....

hi Mogs...yes Omar never had any choice. He was dragged off to Afghanistan, then after 9/11 was handed over to a group of Taliban where he was little more than a tea boy. But the Cons would make it sound like he was some hardened terrorist, and the way they keep trying to punish him is absolutely sickening. And yes, I would like to see them all in Guantanamo...

P.S. On second thoughts Cuba is too sunny. How about a prison in the Arctic for Great True North Leader.? ;)

hi freeomar...Thank you. I probably should have left out the ending, but I was so angry at what the Cons are doing, I was practically red hot. I hate bullies and beasts so much. And congratulations on your lovely website. I hope it's consolation for Omar to know that a lot of people in this country never forgot him. And the day he is finally free will truly be a great one...

Hi Simon let's build a prison up there where we can cage all the Harper-cons and their fundamentalist right wing lunatics eh?

One of the other blogs I really love is Owen Grays unfortunately his mom just passed.

I feel for this young man. He had such terrible parents who accompanied him to Afghan and trained him to hate infidels so much. He was of a age where he could think for himself but with his father, mother, and siblings counting on him so much to uphold the family honor and in doing so as a young man attacked and participated in a war in a foreign country where he had no ties or alegance to. He was Canadian waging war in a foreign country where he ought not have been. He should have never been allowed out of Afgan without facing the courts there. He was a foreigner in Afgan waging war on the people of Afgan against an enemy who was commanded by people of the middle east. Now I see his connection with Aggan. He was Egyptian, the Al Qada were lead by Egyptians and other middle Eastern finatics. It was not only his family but his religious duty to wage war on infidels anywhere in the world that fit his reasoning. Maybe as a Canadian, he should have attacked the infidel where he lived! I thing not as the bleeding liberals who poke their heads in the sand in Canada can only see this sweet innocent boy as being abused and not responsible for his actions. He should face sharia judgment as per his convictions.
Innocent, yeah it was a sin AlQada came to Canada and forced him to go to Afganand kill people.

Let us make him a martyr, please send him back to Afgan.

Simon what get's my goat and pisses me off is that Omar actually jumped on top of a grenade to save American troops lives. Then he was arrested for sacrificing himself and saving others. Sick Simon sick he should of been given a medal of bravery. But no Bush needed an example of a "Terrorist" from his mansion in Texas. Where he was slugging down Margaritas.

Now Harper from his mansion in Mount Royal Calgary wants to continue the abuse of Omar slugging down beer and pretending to be a Hockey fan.

I find it all disgusting...