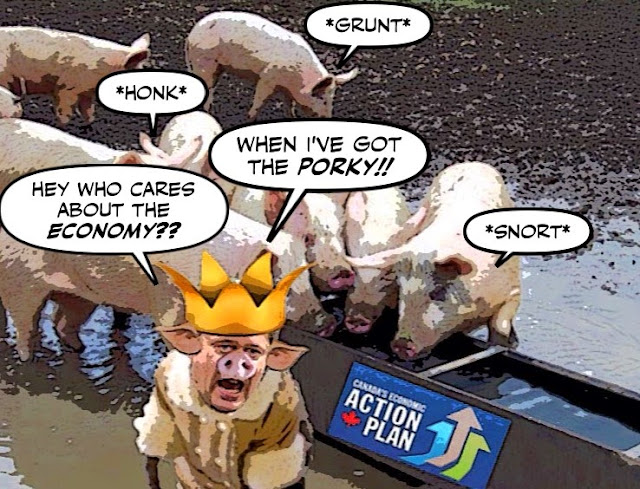 And of course, because it's still Harperland, the stench of rancid pork hangs heavily in the air.

As Great Hoggy Leader sets out to try to buy the votes of some Canadians with OUR money, and turn us into a police state.

But at least I do give thanks for something eh? Thank goodness I'm not a Con.

Because this week they dropped their draws and exposed themselves.

And it couldn't have been an uglier spectacle.

Starting with Pierre Poilievre, the robotic Harper/Nixon stooge who couldn't find the human decency to help a dying man.

Because the poor and the sick must be shown no mercy. He is his master's yapping voice... 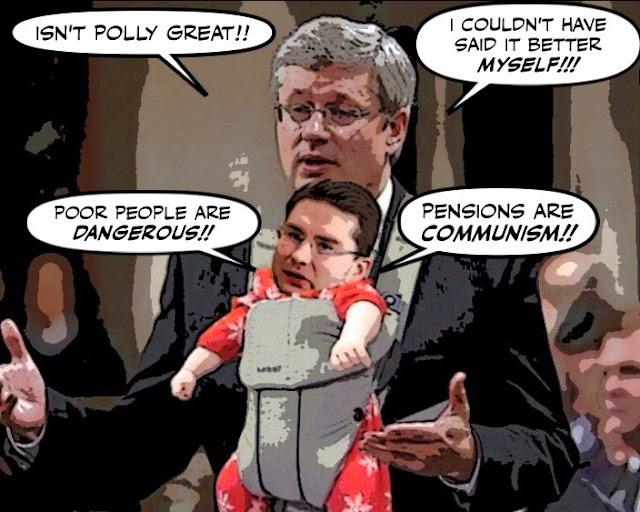 And his master as we know can't feel the pain of others, is morally depraved, and the worst political pervert this country has ever known.

Then there was James Lunney, the Con MP who jumped ship to sit as an independent, although he will still vote with the Harperite cult.

So he could more freely attack the theory of evolution in the House of Commons.

The Speaker allowed Lunney just over 10 minutes to deliver a a wide-ranging speech on religious freedom, the history of chiropractic therapy and the "false construct" of evolution, but Scheer eventually shut down the newly independent MP on procedural grounds after Lunney failed to garner the necessary unanimous consent to continue.

Further degrading our poor parliament, and turning it once again into the House of Con Dinosaurs... 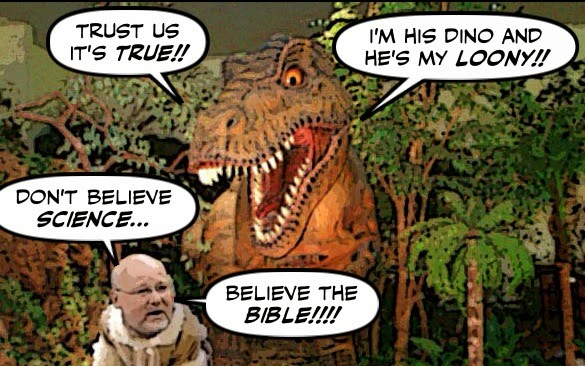 While claiming that the religious i.e. Christians, are being oppressed.

When in fact the opposite is true... 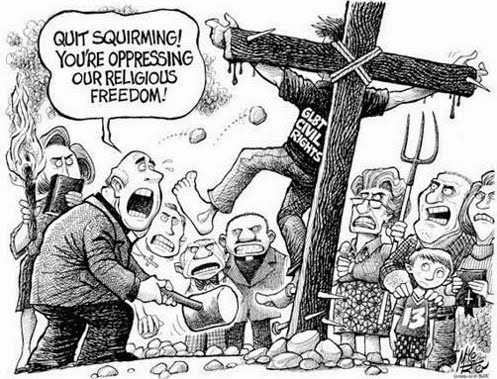 And from Indiana to Iraq it's the rest of us who need to be protected from those dumb and dangerous religious fanatics.

And it also needs to be said, protected from Diane Ablonczy, the old Reform hack from the redneck province of Alberta.

Who while helping to turn the Bill C-51 committee hearing into a grotesque star chamber, by questioning the loyalty of of those testifying... 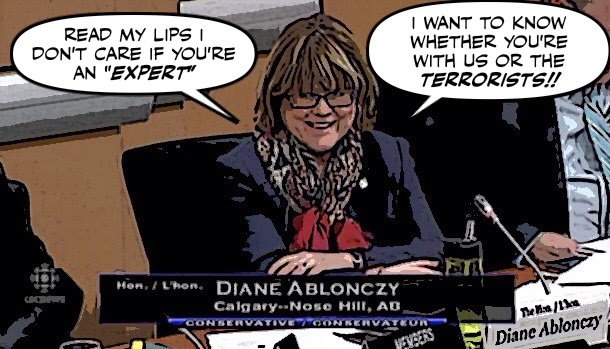 Did also manage to shame herself further by giving the finger fingers to the notion of the "rule of law" and the "principles of fundamental justice."

"Now the judge has to also consider ... something like 'rule of law', they have to consider things like 'principles of fundamental justice,' whatever that is ... There would be such a morass of opinions and considerations that action would be pretty much at a stalemate."

Because you know the rule of law is SUCH a waste of time.

And she obviously feels the same way about our Canadian justice system as her Great Leader... 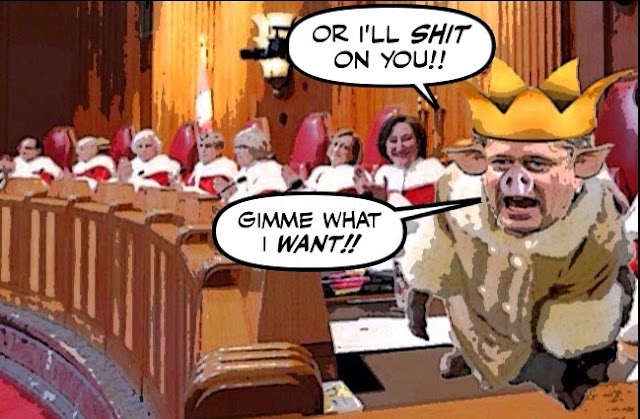 And then of course, as we all know, there was the case of the Con Senator Nancy Ruth.

Who summoned the media to complain that the auditors were trying to force her to eat COLD camembert... 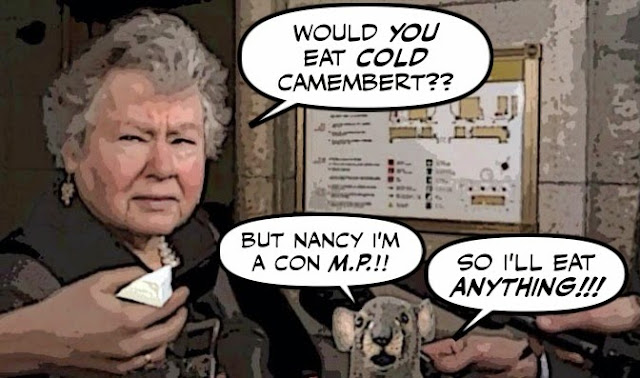 In a country where tens of thousands of children go to bed hungry, and where as a pampered Senator in the House of Pork she's not doing too badly.

And although that was a comic farce, all of the above does remind us how the Cons have come to believe they OWN this country. And can do what they want.

And the good news? As many as 75,000 students and union members marched through the streets of Montreal today to protest against the policies of austerity. 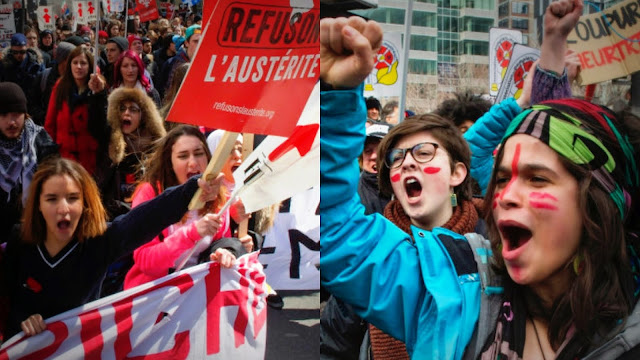 They're not Cons, I'm with them, and the Day of Fundamental Justice is on its way.

So although the stench of Stephen Harper hangs heavily in the air, I know that better days are coming.

So is Spring, so is the weekend, and so is the Duffy trial. Whoopee !!!!

And let's all give thanks that we'll NEVER be Tories...

hi David...thanks for the links. I'm sorry I missed Lunney's speech because it sounds hilarious. The combination of creationism and chiropractic theory must have had the gargoyles all over the parliament building either gasping with horror or screaming with laughter. I'm pretty sure they never seen anything like it... ;)

I 'kinda' listened to Lunney and it was a bit rambling and weird but those people of faith kept appearing on the Hill as he rambled on.. At one point a Liberal MP rose to support letting Lunny continue rambling but IIRC the Speaker overruled him and cut Lunny off.

At first I thought it was a generous gesture on the Lib's part but now I'm a bit uncertain: Was it a generous gesture or did he wish to let a Con (well resigning Con) continue to make a fool of himself and suggest the Con party is suffed with raving nutcases? Which we know it is not, err don't we, I mean Myron's gone ...